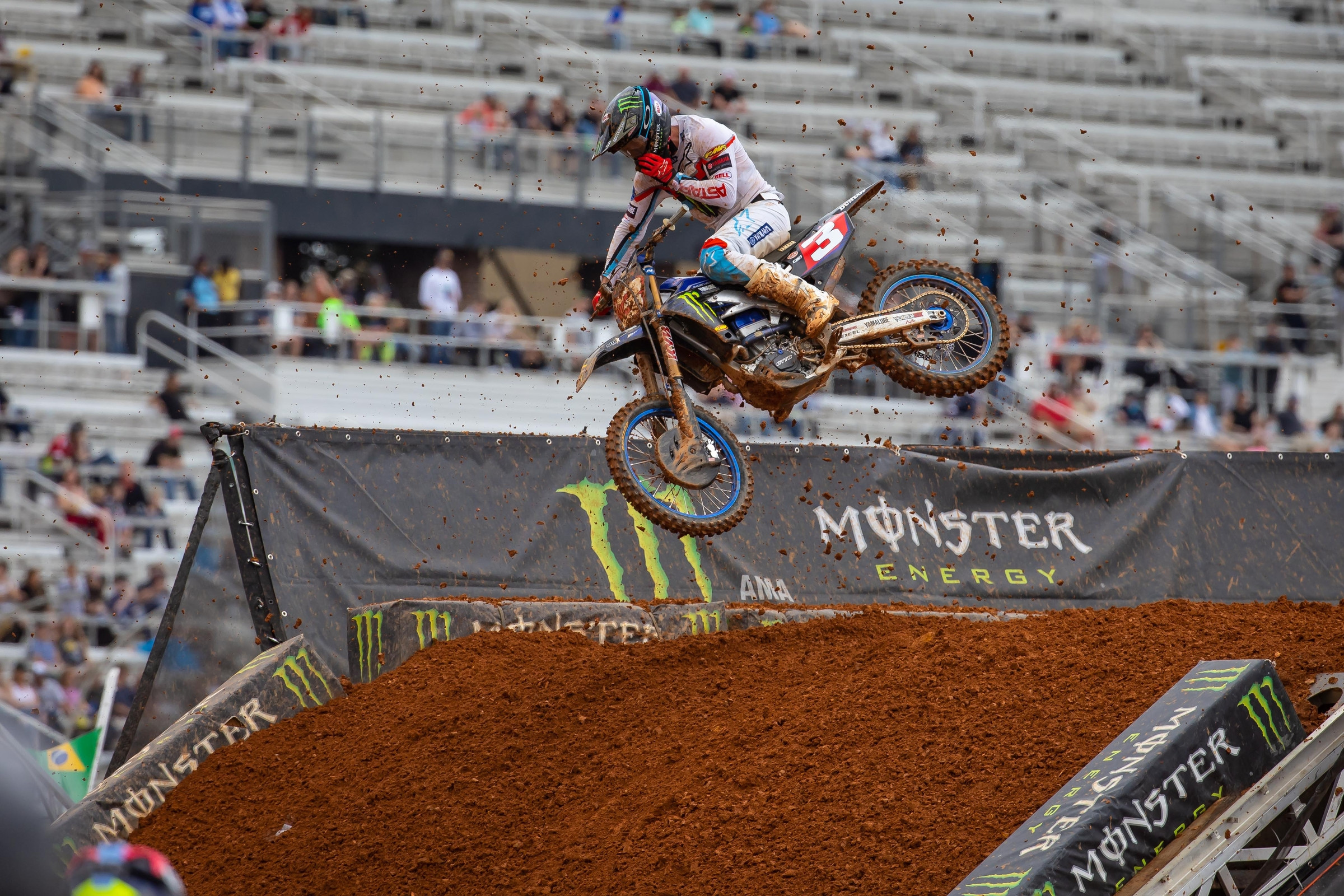 450 Words Closing On One, Starting Another

Stop the presses! Eli Tomac has not won either of the last two Monster Energy AMA Supercross races! Tomac had once generated a five-race win streak at mid-season, going from good, to great, to really, really great as this season rolled along. Yeah, Jason Anderson gave Eli a huge points lead when he crashed out of Detroit, but let’s not forget that Eli had already rumbled to the lead in that race by passing all of the fastest 450SX riders. At mid-season, Eli was absolutely on point.

The focus has changed a bit, as Tomac’s massive points lead makes safety a priority. As such, he’s ridden well at the last two races with 3-2 finishes, but in other moments the win is clearly secondary to just finishing this championship. Last week at St. Louis’ Triple Crown, he rode steadily through the pack after bad starts instead of raging through like Detroit. On Saturday in Atlanta, his start was good but a few laps he described as “super lousy” early left him losing positions early. He came back for second, because Tomac is so good this year that even with a lousy stretch he can still score a podium.

There’s an air of inevitability to this title. He just has to not lose a bunch to Jason Anderson next weekend and the title is his.

“I don't know the exact points right now,” said Tomac in the post-race press conference before anyone had time to do any specific math on clinch scenarios. “I think I just have to be close to Jason. I’ve just got to focus and try to aim for that podium. I think if I get a podium, it will do it. I don't know. We’ll have to go back and see. That’s all we can do is go racing and try to be solid.”

After that, the plan switches back to the business of winning.

“If you wrap something up early, at that point you have nothing to lose,” he said. “So, heck yeah, I’ll try to go win.”

Tomac has been amazing this season in his switch to Monster Energy Yamaha Star Racing, but with this supercross title feeling like a foregone conclusion for several weeks, the new noise comes from the looming Lucas Oil Pro Motocross Championship, that will begin in May. If Tomac can win both 450 titles in the same year, it would cement 2022 as his best season ever. Tomac won the 2017-2019 motocross titles and the 2020 supercross crown. He’s yet to get both in the same year, and no rider has done so since Ryan Dungey in 2015.

He’ll have to go through the same competitors he’s bested in supercross, again, and his teammate Dylan Ferrandis will certainly be tough, too. Ferrandis has already proven what Star’s YZ450F can do.

“Yeah, I’m really excited to give her the test in the outdoors,” said Tomac. “I really think it will shine in motocross. So, I’m excited.”

There’s more to it than just taking on the same old competitors, though. Rumors continue that either Antonio Cairoli or Jeffrey Herlings, or both, will race in America this summer. Tomac was asked about the prospect of finishing off this supercross championship, then shifting the focus to motocross, and potentially racing two legends of the MXGP circuit.

“Of course, I’m focused on supercross and want to just keep plugging along with what we’ve got going on,” he said. “Then for those two guys, if they came over, it’s going to be awesome competition. All I can say is it’s just going to be a lot of competition. It will be new tracks for them, but they’re obviously really fast. I’m sure we’ll have some great battles if they do come over.”

Those are the battles everyone wants to see. The mere idea that both Cairoli and Herlings could be on an AMA Pro Racing gate at the same time is wild enough to make the mind wander. But having them collide with Tomac and his recent return to form? It’s a dream that bench racing is made of, somehow coming to life.