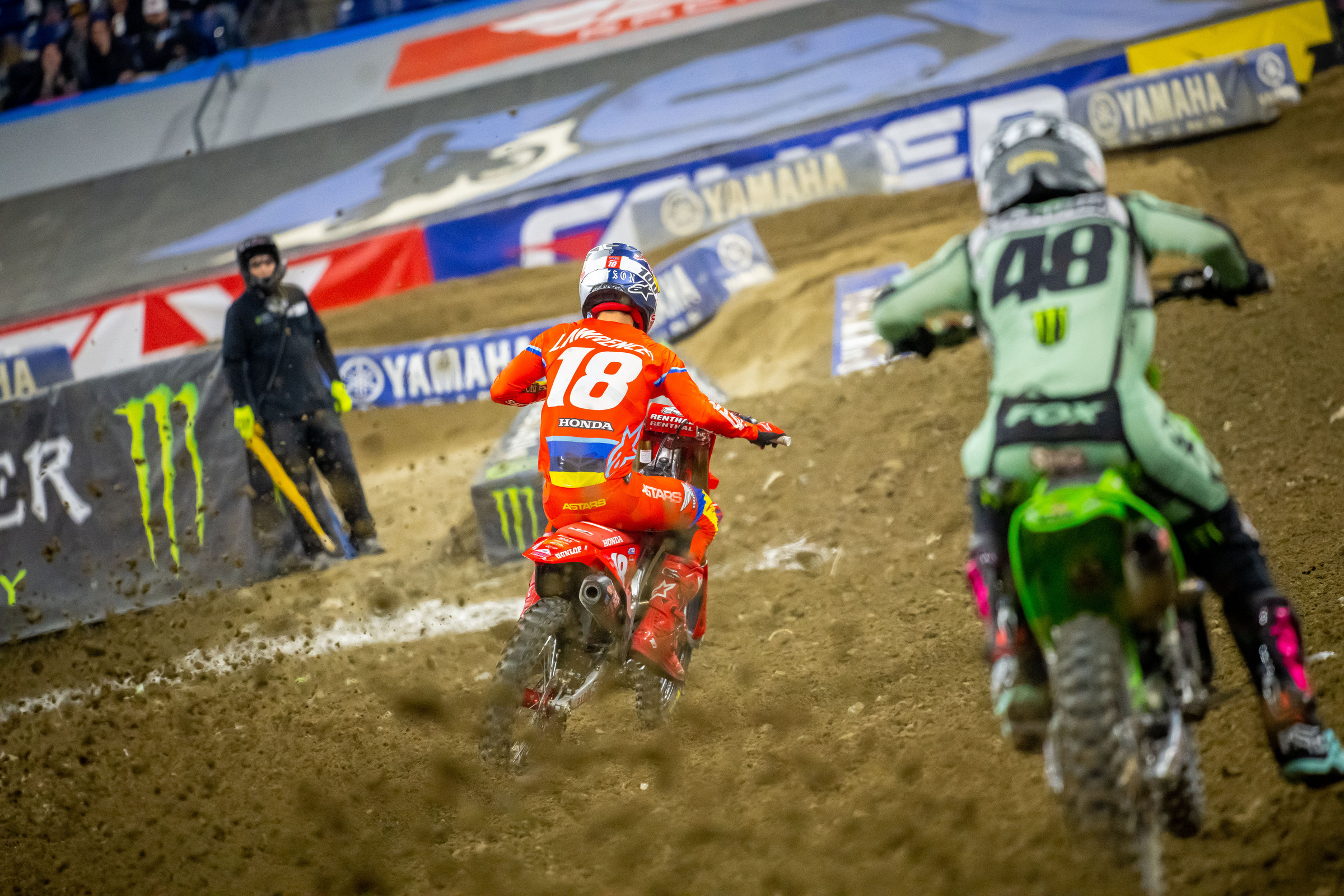 With his win on Saturday night, Eli Tomac earned his 43rd career 450SX main event win, meaning he is now one win away from tying Chad Reed for fourth on the all-time premier class wins list. If Tomac can win in Seattle this weekend, he will tie Reed AND will tie his longest consecutive 450SX win streak with a fifth straight win, tying his mark from the middle of the 2017 season. All eyes will remain on Tomac throughout the rest of this season as he continues his hunt for a second 450SX title and moves his way up several all-time record books.

Stat of the Week: 7 for Lawrence

After battling with Cameron McAdoo, Jett Lawrence earned his fourth win of 2022 on Saturday night. While the Australian is focused on winning the title more than he is moving up all-time wins lists, the latter can help him get to the former. Plus, it is fun to watch his name move up the small bore all-time wins lists and compare him to some of the greats of yesteryear. Jett Lawrence currently has six 250SX East Region main event wins and sits in a tie for 14th-all time on the 125/250SX East Region wins list with Chad Reed, James Stewart, Stephane Roncada, Davi Millsaps, Keith Turpin, and Damon Bradshaw. Lawrence also has an East/West Showdown victory to his name as well, taking his career main event wins to seven total. Only 20 riders in AMA Supercross history have at least ten or more 125/250SX main event wins, the last being Austin Forkner who currently has 11 career 250SX main event wins. With four remaining races in 2022, will Lawrence get to double digits this year?

If you count in the three Triple Crown races in Texas, those numbers change some: the number of total laps raced by the 250SX East Region becomes 116 and Lawrence leads 83 total. He did not lead laps in the first and third Triple Crown Races but leading all 13 in the middle race. Still, Lawrence has had a strong start to 2022. Here are a few more notes.

Through the first five rounds of the 2022 250SX East Region, Jett Lawrence has:

Lawrence’s year has been off to a great start and while he did not win a supercross title in 2021, he definitely got the ball rolling in the right direction. Jett started his 2021 season with 6-1-3-4 finishes before a rough day at the Indianapolis 2 Supercross where he qualified for but did not race the main event. Since not starting that race, Jett has made nine AMA Supercross starts, and has won six of them (including the 2021 finale Dave Coombs Sr. East/West Showdown).

Looking more into the races since his DNS in Indiana last year, there have been 196 total laps raced in AMA Supercross events Jett Lawrence has competed in. And Lawrence has led 108 (or 55 percent) of those laps! If we count the three Triple Crown races in Texas this year, this takes the total from 9 races to 11 races. Lawrence has led laps in eight of those 11 races, and again, has six of overall wins. While McAdoo will not go down without a fight, it appears Lawrence has been a step ahead.

Justin Brayton got wild in the whoops during qualifying and landed on the back of Justin Bogle. Bogle ended up fine and finished 13th in the main event while Brayton was sidelined. Not the first time we have seen a JB-on-JB crime this year.

Here is the SmarTop/Bullfrog Spas/MotoConcepts Honda team’s update on Brayton, who was dealing with a concussion and was out for the rest of the day.

McElrath crashed in qualifying as well and was done for the remainder of the day. He posted on Instagram that he has suffered a “pretty good” hit to the head and knee injury and will undergo tests this week.

“Pretty bummed out I’m not lined up tonight. Crashed in the first timed practice and hit my head pretty good and hurt my knee. Got a big kick going onto the table top and was just trying to save that one and the step off was just a little bit too big to make it off. 🤷🏼‍♂️ Going to get checked out this week and hopefully get back to work.

Robin has been dealing with a shoulder injury for a majority of the season—250SX West Region and then 450SX on the East Coast rounds—but it appears he will need to take time and recover.

The AMA Supercross rookie had a crash during qualifying and the session was red flagged so medical crew could tend to him. The Bar X/Chaparral/Ecstar Suzuki team announced Kilroy fractured his femur and pelvis.

Shaw went down hard in the first turn of his heat race but said on Instagram afterwards he was “All good” but his rear shock broke in half, so his night was done.

Jerry’s Kit of The Week

For the Indianapolis Supercross, Robin and crew chose to represent the Indiana Pacers for the 11th round of their “sport series” gear.

The American Motorcyclist Association (AMA) has posted its post-race penalty report from round 11:

Quotes From The Paddock

"Overall, Indianapolis was a nice race for me to build on after Detroit, especially because I had good speed throughout the day. It was also fun to race close to where I'm originally from, and to get to see some family and friends. The lap times were super-short, so the track got to be pretty tricky over the course of the day, but I handled it well and stayed on two wheels. A podium would've been good, but I wasn't far back at all. Now we'll take what we've learned, do some testing this week and come back ready in Seattle."

“Today wasn’t great feeling-wise, I’m in a lot of pain but just getting through it. I kind of saved it all for that Main Event and I’m glad I was able to get through it. I had a good ride but I wish I would have had a better start to be in the mix. It was tough riding and not being able to do some obstacles but we fought in there. My goal was top-five tonight and I achieved that. I was right there for fourth and it felt good. We were close to that podium, which is all I can ask for.”

“I came into the weekend feeling ready to fight for a win and had a solid day going, especially after the heat race win and first gate pick. Come main event time, I had to do some serious defending early to stay in second and have a chance at the win. We lost some points this weekend but there’s still plenty of fight left in me. I’m here to win and that’s going to remain my main goal for the rest of the season.”

"Indianapolis was definitely a step in the right direction,” Wilson said. “I’m definitely getting closer to the guys up front but tonight was a very, very technical track. In the main, I just kind of struggled with the ruts and the whoops were really tricky. P7 is my best finish yet but I’m not real stoked on it because my riding wasn’t very good, but definitely some positives that we’ll take to Seattle next weekend.”

“I feel like Indy actually treated me well,” Stewart said. “I’ve always liked this track and the atmosphere here has always been good. In the Main Event, I was sitting in fourth and I didn’t feel bad at all. The track was tough for everybody and I made one big mistake that kind of cost me but honestly, I’m just thankful that I’m okay. I’m a little bummed and irritated but it actually motivates me a little bit more to get back up there and get ready for Seattle. Let’s go get ‘em!”

"I had a very interesting crash in the first qualifying session." Bogle further explained, "Super early in the session I was riding next to the track and [another rider] got sketchy and crashed in the whoops. His bike ended up just slapping me in my back and the back of my head. I was very lucky to escape that with being only super sore and a little beat up. I got taped up, then it became time to man-up and ride. In my heat race, I didn't feel great, just okay, and ended up with a P5. Then the main was kind of a disaster. I fell on the first lap so was back in last. I salvaged what I could. It was not a great night, but I'm extremely thankful to get out of this weekend healthy and live to fight another day."

"The track was very soft and pretty sketchy all day," Hartranft said. "In the main event I just dumped it in the sand on the second lap, so that did not help me. I was in last place but caught up to fifteenth. The track was brutal. I'm bummed because I could've gained a lot of points for top eleven in the standings. But it happens, and I'm safe. I'm going to keep working and I just want to be the best I can be every weekend."

“It was a somewhat tough day for me. The heat race was going really well, I was in the lead, and then had a pretty big fall in the whoops that shook me up. I went to the medical unit rig and they checked me out to make sure my head was good and my body was okay. I went out for the LCQ and got it done there, and then ended up fourth in the main. It was a tough night but I’m just happy to be somewhat healthy.”

“The track in Indy gave us a tough challenge, being very soft and rutted, but we made some really good improvements on the bike this week, which made the tough track easier for me. The changes the team made were great, and the bike was awesome! Overall, it was a good night with almost winning the heat race and finishing seventh in the main. I’m looking forward to getting back to work at the practice track and will keep working on getting into the top five and hopefully a podium!”

"I’m becoming more comfortable every week. It was great to qualify P7 and then have a strong heat race, even though my riding wasn't the best," Drake said. "Once the main event came around, the track was pretty beat up. I had a terrible start and just picked people off one by one and finished as far up as I could. I'm looking forward to these next few weekends off, and we'll come out swinging in St. Louis!"