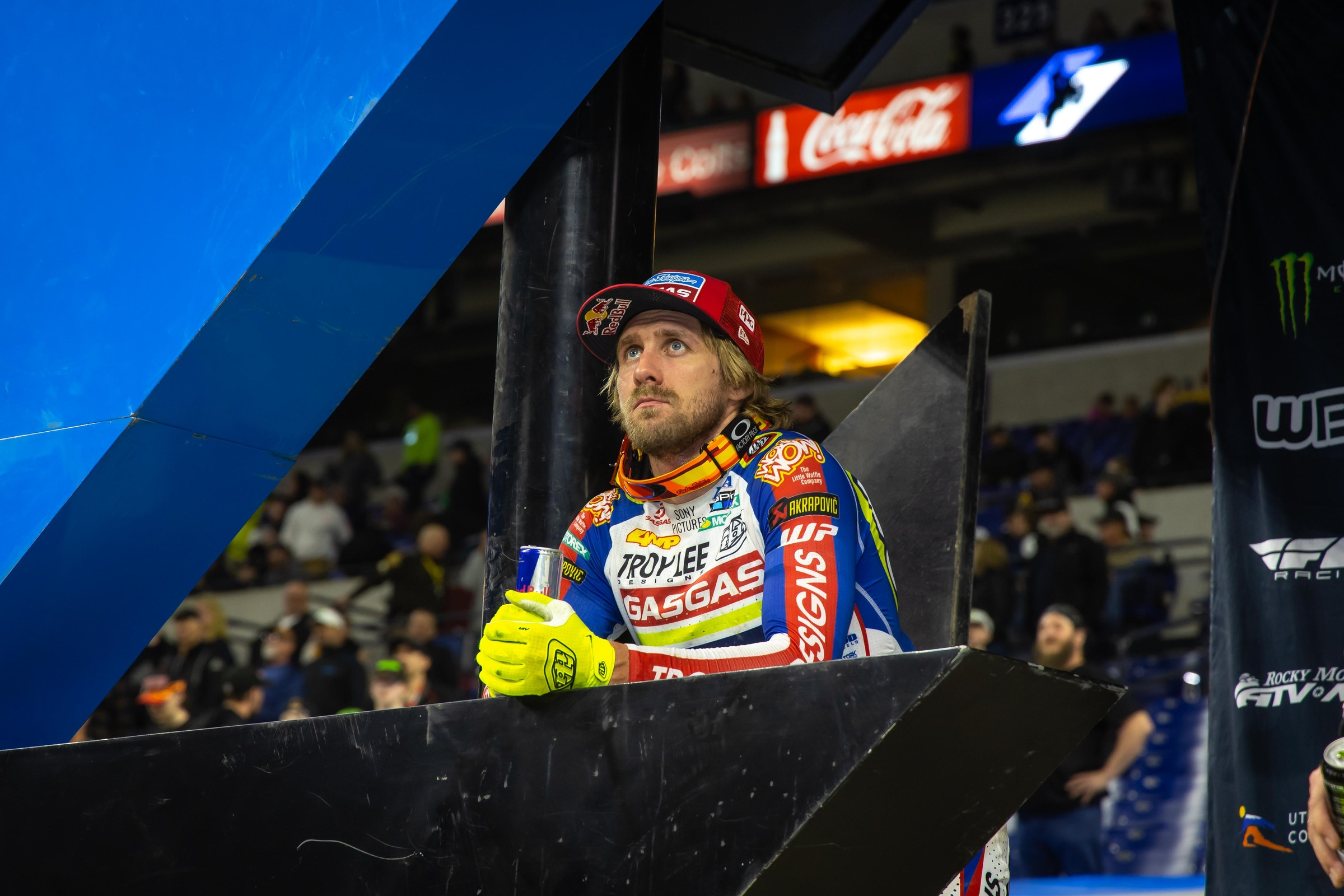 Following another night of close racing in the Monster Energy AMA Supercross Championship in Indiana at the Indianapolis Supercross, we are left with many talking points. Jett Lawrence’s first-turn-crash-to-heat-race-win; Lawrence’s battle with Cameron McAdoo in the main event; and even the mid-heat race fight between Alex Ray and Deven Raper are a few of the highlights of the night. But now that the 450SX results are official and championship points from round 11 are final, we can dig into one of the talking points from the night: Justin Barcia’s move on Jason Anderson.

Barcia got the holeshot as Anderson and Eli Tomac shuffled into second and third by the end of the first rhythm section. Barcia clicked off lap after lap out front but Anderson and Tomac reeled in Barcia. Anderson made a pass for the lead but the #51 stayed close behind. The next lap, when Anderson went to the outside of the turn after the supercross triple, Barcia made an aggressive move to the inside. The two collided and Anderson went down as Barcia rode off, slightly slowing and raising his left hand off the bars as if to apologize.

And here is a second angle.

Anderson would remount behind a handful of riders and would eventually come home in sixth. Barcia went on to lead nine more laps before Tomac made a pass for the lead. Tomac led the final eight laps of the race, almost giving up the win in the last rhythm section by not doubling over the first turn, but the #3 held on for his fourth consecutive main event win in a row as Barcia finished a second-best second.

The Troy Lee Designs/Red Bull/GasGas Factory Racing rider said the following in a post-race press release from the team:

“It was a nice start, it felt good! The team gave me a good bike tonight. I didn’t get the win but second is pretty good, I’ll take it. The track was insane. Man, it was wild! That pass with Jason [Anderson], I’m going to have to watch it. It’s a bummer, I don’t want to see anybody go down. I’m happy with my race and I’m pumped and ready to go next weekend.”

The New York native was also asked about the incident in the post-race press conference:

“I’m not really sure what to say because it was a racing incident. And like I told these guys, I wouldn’t change anything, I’d do the same thing I did, I took the line and I don’t know, obviously he didn’t see me.”

"What was I supposed to do? We’re racing for money. I don’t think it was dirty. Like I went in there…those corners are difficult: you go for it, or you don’t go for it. I seen an opportunity and I went for it. Like I wasn’t going 100 miles per hour, trying to clean the guy out. I was on the brakes. He could have turned down harder or he didn’t see me. It’s just that kind of situation. Like I said I wouldn’t change anything. I know I’m gonna have to go to the AMA and talk to them. [Laughs] And that’s exactly what I’m going to say, like, ‘What can I do?’ That’s what I did. It’s a racing incident. We’re racing for a lot here.”

You can listen to watch Barcia had to say about the situation at the 2:20 mark below in the post-race press conference.

This morning, the 450SX main event results were finalized: Barcia would retain his second-place finish but received a three-point penalty in the championship and a $3,000 fine.

🚨 BREAKING 🚨 Justin Barcia has received a 3 point penalty and a $3,000 fine from the AMA for his move on Jason Anderson in the 450SX Main Event 📋#SupercrossLIVEpic.twitter.com/94BBLEurkz

Barcia was already on probation entering the night, given a "written warning, 6-month probation" for "overly aggressive riding" for his incident with Justin Bogle at the San Diego Supercross. The move on Anderson last night was looked at by the American Motorcyclist Association (AMA) trio of officials (Jeremy Albrecht, Mike Pelletier, and Tim “Tooley” McAdams) and the penalty was handed out early this morning. The #51 becomes the first rider to violate their probation this season.

This is significant in the championship because Tomac’s 48-point lead from the end of the race now becomes a 51-point lead over the two-way tie between Barcia and Anderson for second in the standings. With only six rounds remaining, Tomac has almost a full two-race advantage over the competition as he looks to bring home his second 450SX title in his debut season with Monster Energy/Star Yamaha Racing. Below are the 450SX championship standings.