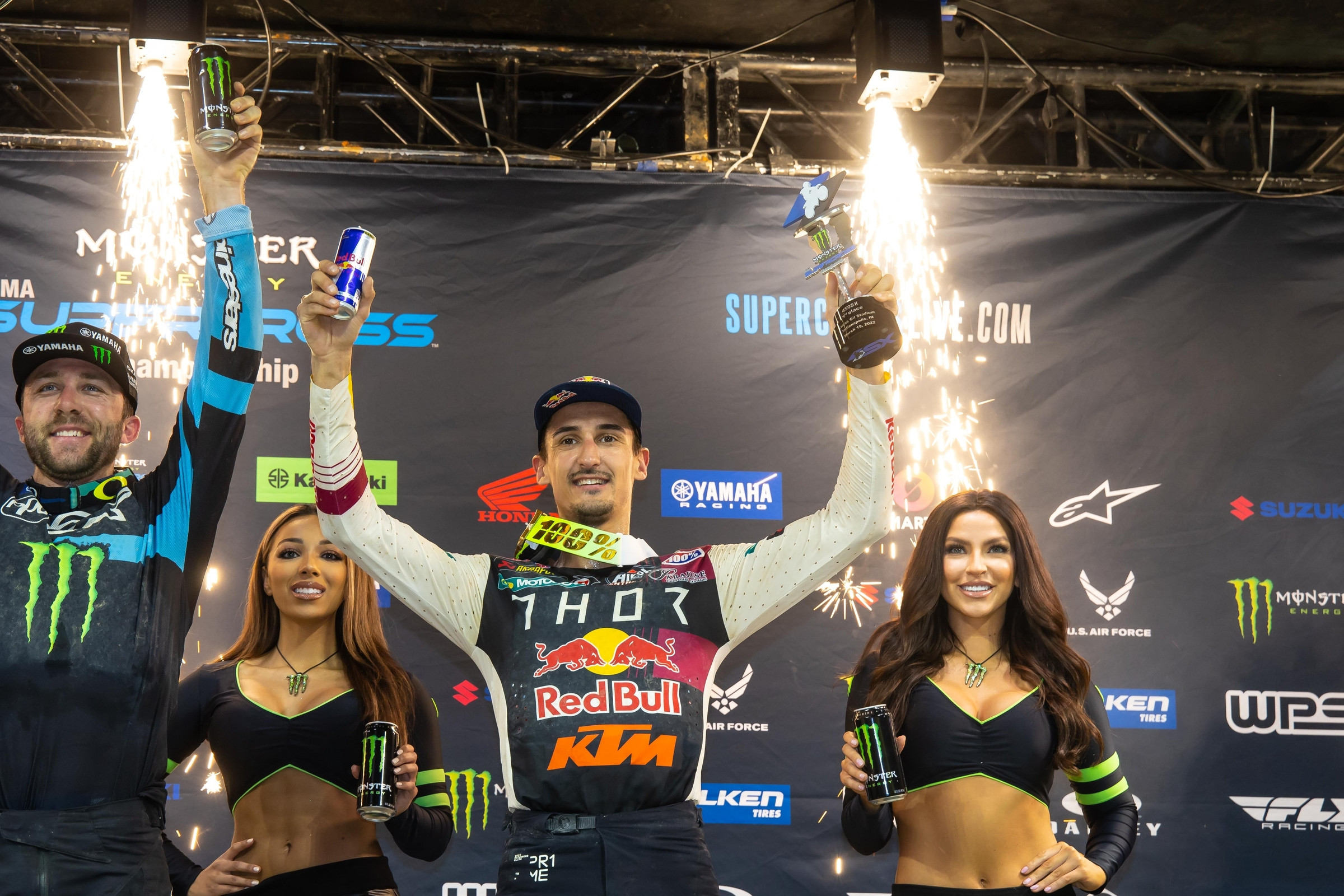 Indianapolis has been good to Marvin Musquin in the past and this year was no different. The Red Bull KTM rider was able to grab his second podium of the year, and his performance showed that he is starting to feel more comfortable on the new bike. He was even able to catch up to Eli Tomac and Justin Barcia at one point during the main event and mount a brief challenge for the win. In the end, he settled for third. Here is what Marvin had to say about his night.

Marvin, as you near the end of your KTM contract, how special is it for you to be on the podium? And who do you have on the podium for tomorrow in Bahrain?
Marvin Musquin: To be honest, I really want to do good right now. I’ve shown sometimes my potential this year, but I’m not quite happy with my season. Today was a great ride. I’m super happy. I want to be in the fight, and that’s exactly what I did tonight. I was in a good position. I was patient, and I was able to get Malcolm. I tried to push to get Justin. I owned my position tonight. So, I’m pretty happy about it. Moving forward, we made some changes on the bike. I was not very comfortable, but in the main I was right there when it counts. Pretty pumped on that. About tomorrow, obviously cheering on the Frenchies: Esteban Ocon and Pierre Gasly. It’s going to be a fun one. First whole season in Formula 1. New cars and stuff. Everybody is going to be watching, for sure.

Back to what you were saying just then, there’s a lot more fight left in the tank for you. This is a one-year deal, supercross only with Red Bull KTM. Are there any discussions on what’s going to happen next year? If you got offered another spot for supercross next year, would you take it, or are you thinking about doing something else?
No, I love what I do. This year is definitely different because I have a supercross-only contract. That’s what I got offered by KTM, and I took it. I’m 100 percent in it right now and trying my best. Getting on the podium is really good tonight. I’m showing the speed. I was able to fight until the end. So, I still have a lot in me. It’s a new year with a new bike as well. So, those conditions it’s pretty much the first time we’re riding on those conditions. We had Minneapolis, but this is a unique one. Maybe Seattle will be kind of like that, but there’s no other races like Indy. So, that was a good test. To be honest, there were some areas of the track where I didn’t feel too comfortable, but others where, compared to other riders, I could see and feel that it was easier with my bike than the other guys. So, we have definitely a potential with this bike. We’ll keep working on it.

Midway through that race you looked like you were making your way towards the front. You had some lines figured out. Your jump line through the whoops looked like it was working good but then these guys found something different. Did you just get caught up in the lapped riders and lose the tow? Or did you sort of drop that pace towards the end?
That’s a good question. I was right there. To be honest, it was a lot of fun to be in that fight. I was actually close to Eli at one point. When he got Justin, obviously he ran away and then I was charging and trying to pass Justin. Like you said, after that towards the end, I lost a little bit. I don't know if it was a little bit of lappers, a little bit of mistakes. A little bit of everything, I think. Through the whoops, a little bit slower maybe and then that rhythm after the whoops I decided to go double instead of triple in. I didn’t want to throw it away. I kept charging. I think it was pretty quick to still go double instead of three in. But I lost a little bit at the end. I really knew Malcolm or anybody else was close to me behind, and I didn’t want to look back. I kept charging. At the end on the last lap, I actually looked back, and no one was behind. It was a good race. Not enough to charge and pass into second, but I’m happy with overall the whole main. It was a good charge. Like I said, I owned my third place tonight.

Marvin, when we’ve had Webb up here in a couple press conferences recently, he’s talked about some of the wholesale changes they’ve made on race days with the bike. Have any of those changes helped you to get to the point of being here on the podium this weekend? Or between you and Coop, is there kind of enough difference? Have you had to chase your own route with this new Red Bull KTM?
We are a team. We’re two riders. When we have something that works, obviously the other rider can see it and wants to try it. It goes both ways. We also have Ryan Morais that has been working really hard with the team on suspension and other things. Like I said earlier, it’s a new bike, and riding in those conditions today was a real test. There are some sections where our bike was pretty good today and others where we were struggling, but we keep learning. We are pretty close in settings right now with Cooper. Just a really tiny difference between the two settings. Our shock, for example, is the same. It’s the little details that are different.