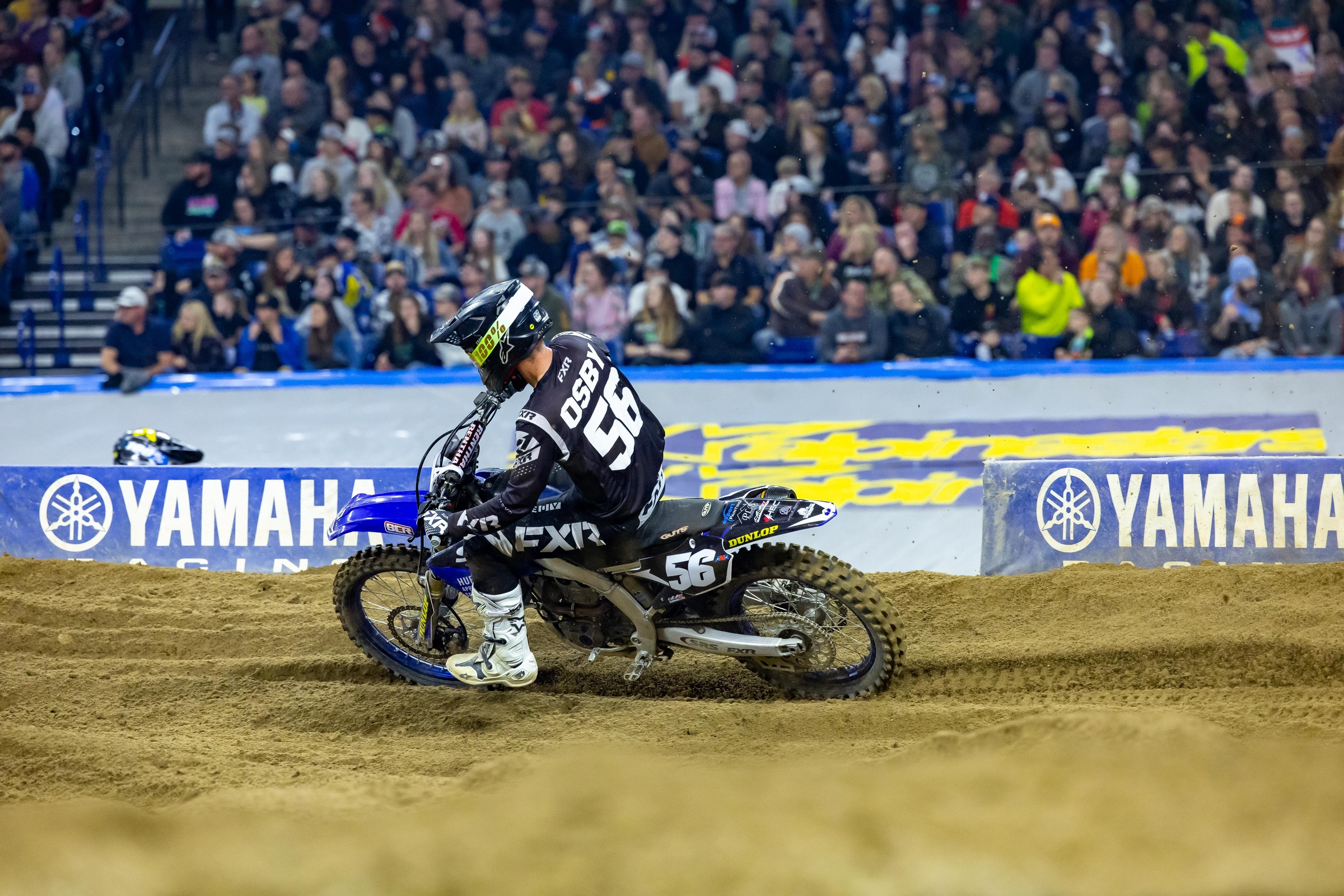 Brothers in arms at Indy! Josh Osby has had a rough season in Monster Energy AMA Supercross in 2022, as after finishing sixth in 250SX East points later year he failed to make a single main event through the early rounds of 2022. Josh was then let go from the Phoenix Racing Honda team. That’s when his practice buddy Marshal Weltin stepped up and loaned him a practice bike for the Indianapolis Supercross over the weekend. They both put it in the main event!

We chatted with the double privateers this week to hear the story.

Racer X: Okay first, how did this idea come about?
Marshal Weltin: Well, me and Josh have been training with each other all off season pushing each other at ClubMX. Things didn’t start off great for him this season. He was struggling and unfortunately got let go from his deal with his previous team.
I had a huge support system for my home race in Detroit. And I called Josh on my way home from the race, and we talked. I have had a lot of people step up in my past and help me when I was in need. So, I took it as an opportunity to pay it forward and help a friend for his home race in Indiana. And we kind of discussed things and made it work!

Marsh, how in the hell do you even have a practice bike? Is it the same as your race bike?
Weltin: Yeah, I purchased two bikes with my own savings before SX. It’s 95 percent identical to my race bike. Jamie Ellis [Twisted Development] got me dialed with the engine. It’s identical package, just a slightly different cam setting.

Okay so Osby how much time did you get on it before the race? Did you guys change much?
Josh Osby: I rode it for about 30 minutes at ClubMX on Tuesday. Then I rode press day at the track at 4:45 a.m. on Friday morning! So honestly maybe an hour on the bike before Saturday.
All we changed were the handlebars, a couple clicks on suspension and that was it.

We have this crazy photo of you in the same exact gear, with Marsh’s name and number. So, did you also share gear and other stuff besides the bikes?
Weltin: [Laughs] It was last minute! So, for press day he wore an old set of my gear. But Brad and Andy [from FXR] got him dialed for the race on the weekend.
Osby: I had to wear Marshal’s jersey and pants for press day because I didn’t have FXR gear yet! Besides that, thankfully I already had the same boots/helmet as him, so it was easy to match once I got my own FXR gear.

Crazy. What’s the transportation situation like? Are you driving to the races? Marsh you can take this one.
Weltin: Yeah, we drove together to Indy in my van. Josh took the majority of the drive and I ordered pizza for us. I plan on driving to the rest… with the exception of maybe Utah I’ll try and throw my bike on a rig. But unfortunately, my budget for two riders ran out after Indy. I can’t sustain for the full season. Just was hoping to jumpstart the JO56 program.

That’s all good. So how did the weekend go? We will get to results in a second. First of all, what was it like pitting together and stuff? Was it a help to have you guys working together or was it a lot of moving parts?
Osby: I think it worked out really well. Even though it’s on his own, Marshal runs a great program. We pretty much just came up with a game plan each day for how we wanted to attack it and what work needed to be done to the bikes. Obviously, things always come up and change the plan a little bit but for the most part, it was smooth sailing from the time we took off headed for Indy.

How did it go compared to a normal race for you on your own, Marsh?
Weltin: I had so much fun. I was cheering for Josh in quali, honestly hoping that he was faster than me! There wasn’t a competitive environment... just tried to keep each other in a good head space and have fun all day. Our bikes held up great. And we had two good friends as our mechanics, so the vibes were good all day.

Yeah, I was gonna ask about mechanics! Who did you have?
Osby: Marshal had a Michigan native friend, and I had my brother-in-law.

Is the mechanic thing basically dudes volunteering to help out?
Weltin: Yeah, I’ve had a few different guys help. All good friends and guys I grew up racing with in Michigan. The support has honestly been unreal. Can’t be more thankful. It’s humbling.

Okay so…did Phil [Nicoletti] threaten to kill either or both or you? Careful, Osby! That LCQ was tight.
Osby: Nothing out of Phil! Well, he did say I f$#&ed him in the second turn in the LCQ but that was it.
Weltin: I did have a goal to beat Phil once this year. Glad I could check that box!

What did it feel like to make the main?
Osby: It was just a big relief, honestly. I laugh when I see things like, “Osby made his first main of the season,” because wondering if I’m going to make the main shouldn’t even be a thing for me! I think there will be a time down the road where I can talk about why I was struggling but for now I’m just thankful that under different circumstances I was able to make it in.
Weltin: It’s funny how people forget he was SIXTH in the championship last year. Josh is a great rider and I’m glad we could work together to get back on track.

Look at that! Still got his back! Marsh, the season has been pretty solid for you, and you’ve hit career-bests in supercross. How has it been going?
Weltin: Last week was a PR! I honestly didn't even know if I would be making night shows coming into SX. I didn't have much prep coming into the season because I was coming off shoulder surgery. But I've just been trying to learn every weekend and have a good attitude. I get down on myself sometimes because I struggle with timed qualifying. Normally when the gate drops I’m there to race though. It sounds bad but I really have no plan for the year. Just have the goal of having fun and ride to the best of my ability.

Okay Marsh what’s next for you? Just supey or will you try to hit outdoors?
Weltin: Currently trying to piece together a 450 outdoor program for outdoors. I put 100 percent of my effort and time into this SX program for the past four months. So, I’m now transitioning to how to race 450 outdoor for the summer. I’ll still be living at ClubMX full time. But I’m trying to find a good balance of U.S. nationals, maybe a Canadian national. And some bigger money races if the timing works out.

Okay awesome. Any idea what’s next for you, Osby?
Osby: I’m really hoping a good fill in ride comes available. Other than that, I think I will work on putting together a 450 effort.

Okay so we may see you again in supercross this year?
Osby: Yes, I’m really hoping so.

Awesome. Thanks boys this will do it. Wanna throw some sponsor shout outs in there?
Weltin: SRS pharmacy systems, Huron appraisal services, Cycle North. It’s been a fun season.