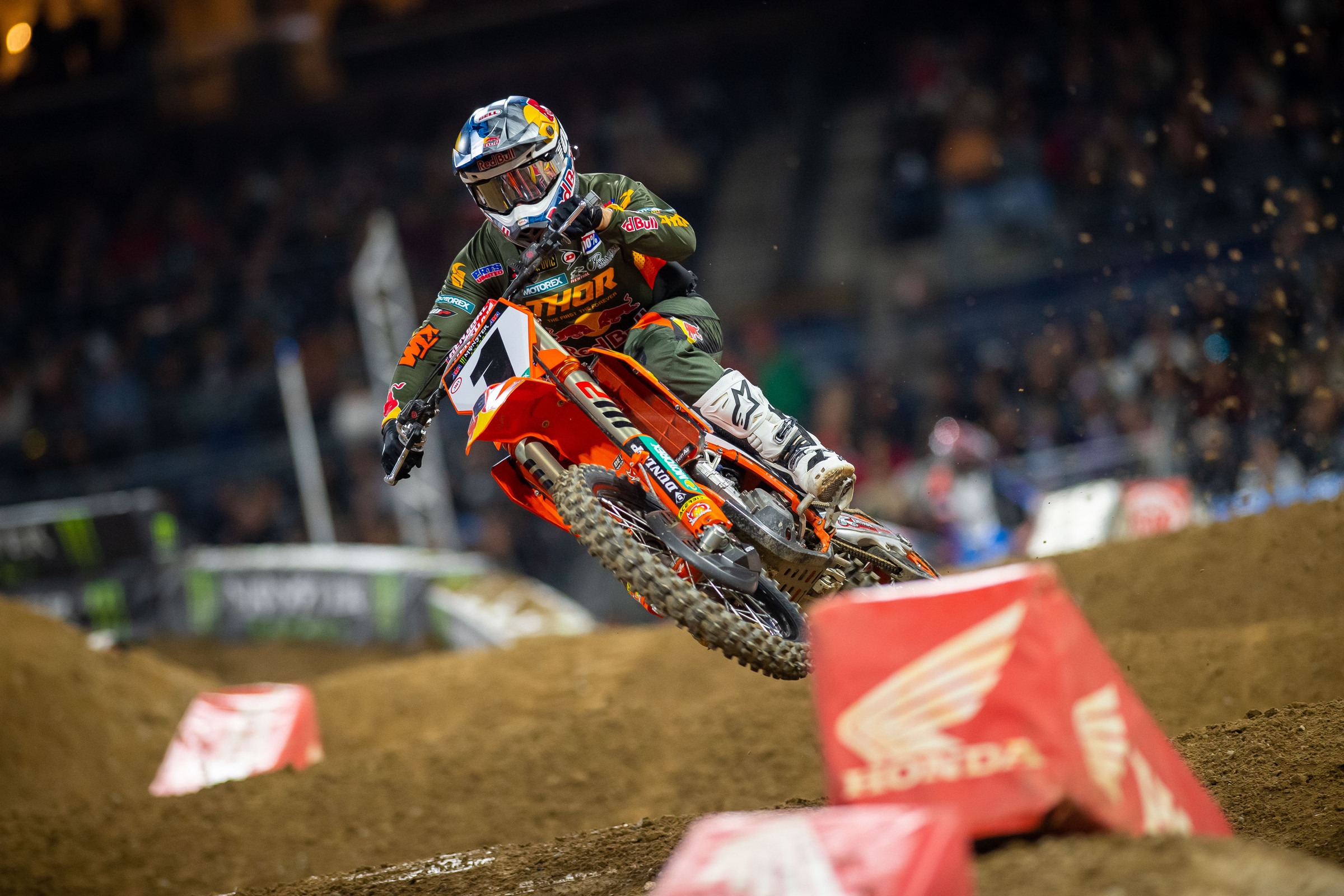 If unpredictability is what you look for in racing, then the 450SX Class has delivered in droves over the first three races. We've had three different 450SX winners in three races and proven champions like Eli Tomac and Cooper Webb still haven't won! Justin Barcia and Marvin Musquin are more than capable at winning, also, as both have won 450SX main events before. It wouldn’t be entirely shocking if Malcolm Stewart, Aaron Plessinger, or Dylan Ferrandis had the cards fall their way and get a victory. There’s a good chance we’ll end up with four different winners in as many rounds. –Aaron Hansel

One of the knocks on Eli Tomac is that, in the past, he’s always seemed to take a while to get rolling, leaving fans and media to speculate on what might be if he could get things clicking early. Well, he hasn’t won a race yet, but he does now have the points lead after just three rounds—he leads Chase Sexton and Webb, who are tied for second, by a single point. It’s a great spot for Tomac to be in early, especially if he’s able to start picking up momentum as the season progresses. –Hansel

We’re not talking about the pyrotechnics in the opening ceremonies of Monster Energy AMA Supercross here, we’re referring to the situation between Justin Barcia and Justin Bogle. Last weekend Bogle ended up on the ground, courtesy of contact from a charging Barcia, he was extremely unhappy with Barcia. A lap down, he waited for Barcia to come around again and when he did, Bogle deliberately rode into him, putting him off the track and on the ground. Bogle was disqualified for the move, but will that be enough justice for Barcia? We’ll see how this situation plays out this Saturday night. –Hansel

With the way Michael Mosiman has been riding lately, you knew it was only a matter of time before he notched his first win. He just needed to clean up the little mistakes that were costing him positions in the main events, which he was able to do last Saturday in San Diego. The win didn’t come without pressure, either—Hunter Lawrence was all over Mosiman late in the race. Now that Mosiman’s got that first one out of the way, will we see him put together a string of wins? –Hansel

Winning on the Off Nights

The old saying, “You win championships on your bad nights,” gets used so often it makes a bald Dunlop look fresh. It is true, however, and that’s exactly what Christian Craig did in San Diego. After a big crash that saw him down in the first turn and not even within sight of the leaders, Craig dug in and miraculously charged his way back up to third place. With that kind of speed and ability it’s going to be pretty difficult for anyone to make up serious ground on Craig, even on his off-nights. Can anyone make a dent in his lead at A2? –Hansel

While Colt Nichols season-ending injury and Christian Craig’s two race wins and impressive charge at the third round have been the headliners for the Monster Energy/Star Yamaha Racing team, you cannot forget the team has another rider on this coast: Nate Thrasher. Thrasher won two 250SX main events in the eight main events he made in his rookie AMA Supercross season in 2021, although both came at the super-sized Atlanta Motor Speedway. It might be a bit early to call him a title favorite, the Tennessee native is fast and on great equipment and going out each night hoping to fight for race podiums and wins. But unfortunately, that has yet to be the case in 2022. Thrasher finished 12th and fifth to start off his season, then he was in third place only a few laps into the third-round main event but went off the track, losing time and positions. That cost him a shot as his first "non Atlanta" podium. He remounted and finished eighth.  “It was a tough night in San Diego," he said in a team press release. "I felt good throughout qualifying, but a few costly mistakes made for a long night! We made some progress on our starts, but I’m not satisfied. I’m going to continue to put in the work to be where I want to be.”

The #49 sits seventh in the standings, 29 points his teammate Craig. Could Thrasher land on the podium—or find a race win even—in order to mix up the championship for the top several riders? -Mitch Kendra

That was the title for Jo Shimoda’s first vlog from the season, post-San Diego Supercross. And that is fair to say, as Shimoda, whose tame but steady and consistent rides in 2020 and 2021 allowed him to finish inside the top-three of the 250SX East Region championship in his first two seasons of AMA Supercross, has not had the start he wanted in year three. Shimoda stayed off the ground his first two seasons but pushing the limits this year has caused the Japanese native into uncharacteristic—and costly—mistakes: getting stuck in the gate, crashing in the whoops during the mains, and stalling his bike. A first-turn pileup at the third round start did not help, as the #30 was one of the last riders to get remounted and going again. But that does put some perspective on his fifth-place finish. Shimoda said afterwards, “I think without the first turn crash in the main I could have finished on the podium. My goal is to compete for wins, but we fought hard today and came away with a season-best finish.” Will Jo finish on the podium for the first time this year at round four? -Kendra

Carson Mumford and Brandon Hartranft both logged career-bests in their respective classes at the third round, Mumford finishing sixth in 250SX and Hartranft finishing 15th in 450SX. For some, those numbers might not jump off the page, but for the Suzuki duo, these are signs of progress. Yes, Mumford was in a podium position early in the race and dropped back several spots, but it was still a more steady ride than the first two rounds, or what we saw last year. The San Diego Supercross was only Mumford’s seventh career 250SX main event start, and only the 11th career 450SX main event start for Hartranft. And reminder, a top-15 finish in the premier class of AMA Supercross is no joke! Props to both riders as they head to Angel Stadium with some confidence. -Kendra

As mentioned above, the 450SX Class is no joke. However, Dean Wilson is frustrated with his main event performances to this point (12-10-14). Deano has been a constant top-ten for years, but recently displayed some frustration in a recent vlog and in interviews. Wilson, who trains under Mike Brown at the Aldon Baker Baker’s Facility in Florida, said he has been riding with Aaron Plessinger and Malcolm Stewart (both new to the Baker program) and can match them in speed during the week, but he does not get the results they do on race day (9-2-6 for Plessinger and 7-5-5 for Stewart so far). Wilson was briefly at the top during a qualifying session last week but ended up 14th-fastest. Then in the main event, he stalled his bike and lost his clutch last on the opening lap as he dropped to dead last. He had to go through the field without his clutch for the remainder of the race.

“I’m usually not that frustrated, but to be honest I’m pissed off,” he told our Steve Matthes post-race. “I work really freaking hard and I know I can be in that top eight. I know it’s realistic. Dude, I ride with Malcolm every week and he’s top-fiving. Yeah, I’ll get there.”

With a little extra fire, and a working clutch, could Wilson find himself battling around the top five? -Kendra

The fourth round of the championship will also be the second of the six premiere 250SX Futures events. There are no season points towards a championship at these six events, but the top four finishers from the these races will makeup the 24-rider line up that will compete against one another at the finale in Salt Lake City, Utah, for the Supercross Futures AMA National Championship. Ryder DiFrancesco won the 6-minute-plus-one-lap main event in Oakland, California, and was once again the fastest qualifier during 250SX Futures qualifying in Anaheim on Friday. He will surely be someone to watch today, as will Dylan Cunha (second in Oakland), Gavin Towers, Brad West, Chase Yentzer, and Luke Kalaitzian. Remember, the gates will drop on the 250SX Futures main event at 4:30 p.m. PST/7:30 p.m. EST and will be broadcasted live on Peacock TV after the last 450SX qualifying session. Make sure to tune in (or stay in the stadium) for a glimpse at the rising stars of the sport. -Kendra