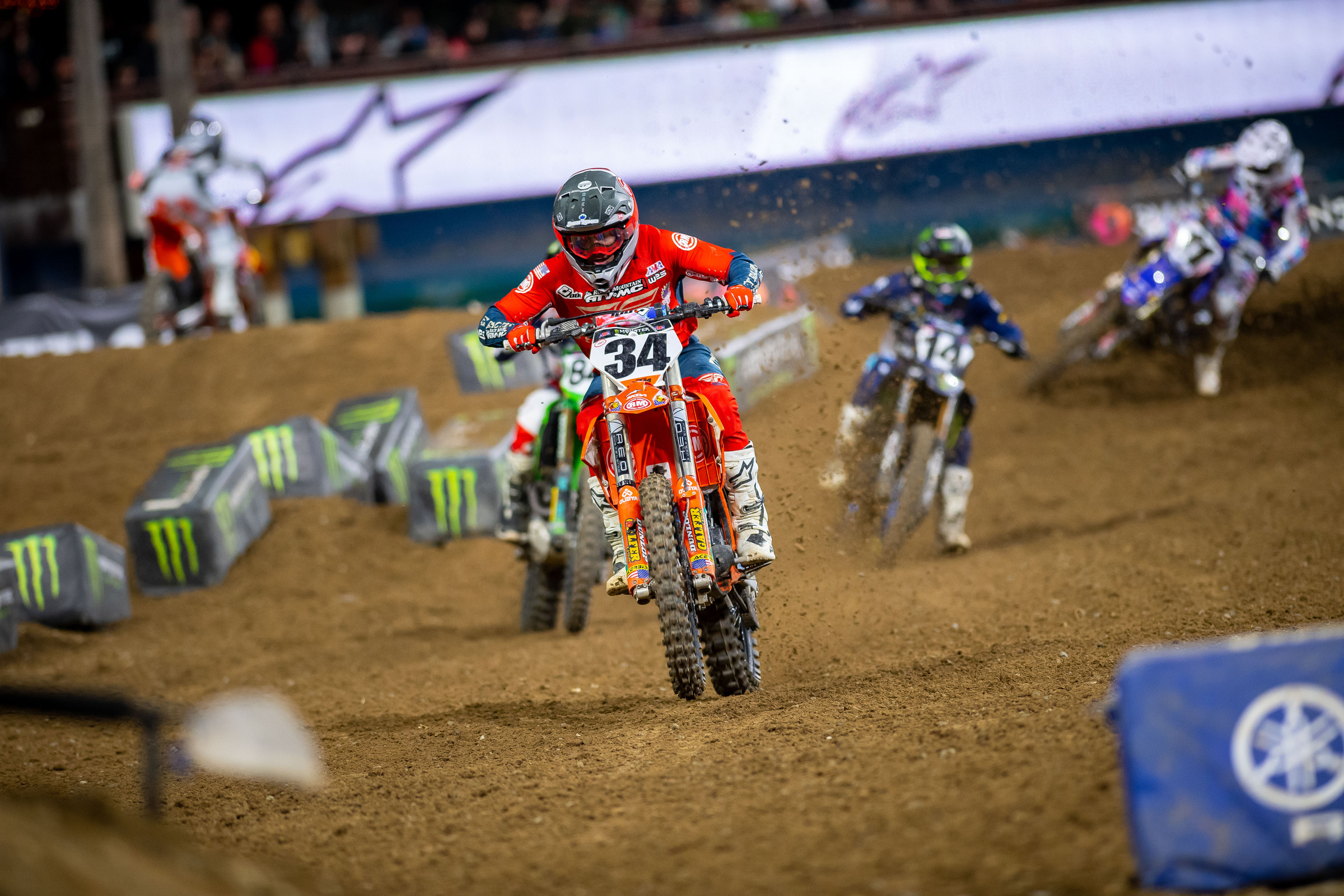 The three musketeers at Rocky Mountain ATV/MC-KTM-WPS turned into just two earlier this week when it was announced that Joey Savatgy would undergo season ending knee surgery. That leaves the team with Max Anstie and Shane McElrath to carry the flag the rest of the season. For Anstie, he currently sits 12th in the 450SX points standings and has seen steady improvement week to week as he has now gone 14-15-12 in three rounds. In McElrath’s case, the upward trend is similar as he’s put 18-14-13 scores on the board. Just four points separate the teammates and as we start to settle into the championship a bit, each rider is eyeing to keep that upward trend going. We caught up with both of them at press day for the Anaheim 2 Supercross to hear what they think about their early season trends.

Racer X: Just kind of give me a synopsis of how you feel so far through three rounds. What have you learned, what have you felt good about, and what are you still trying to improve?
Max Anstie: Honestly, I’ve loved it. It’s been great. I’ve had some great races. It’s been amazing to be in the mix. You know, the last race in San Diego, I was right on the back of Marvin [Musquin], he was in 10th, and I was in 11th. I was right there the last two laps and then I make one mistake and [Justin] Brayton got me, and I ended up 12th. Honestly, it was just awesome to be up there. I’m feeling solid in the whoops. I’ve made a big step forward with that. Honestly, I’m learning every day. Every day in the offseason when I was riding with Cooper Webb, riding with Jett [Lawrence] and Hunter [Lawrence], riding with my teammate Shane [McElrath], every day I’m picking up on things and constantly growing and learning. It’s been a great first three rounds. I’ve really enjoyed it. The team have done a good job helping me with the bike and settings. San Diego was super slick, so it was a weird kind of setup, but they did a good job with that. Again, it’s round three, I’m not stressing anything at the moment. I’m here to build and now we can start getting it stuck in there a little more and taking it as it comes. But honestly, I’ve felt solid, I’m really enjoying it and I’m looking forward to tomorrow night.

Talking about making those improvements, is there any specific area that you’re wanting to work on to get better at or is it just kind of everything?
Well the big thing for me in the offseason was the whoops. With one of my team bosses Forrest [Butler], we really worked on keeping my head forward and not being so Euro style [laughs]. That mentally is continuous work. I’m continually working on, not the setup of the bike, it’s just fine tuning the bike to know what works to roll the turns the best. What works to push through the rhythms the best. That’s a constant thing. Now it’s just fine details. I think I have everything there. I’m not struggling with anything. So, it’s just starts. That would be one thing. My teammate Shane, blimey holeshots pretty much every heat race! We get to train together so that’s good, but our bike setups were slightly different on that side of things. I’ve made a few adjustments this week, so we’ll see. Our engine characteristics and mapping were different because we just liked it differently. But obviously, what he’s doing is working on the gate. I’m happy with where we’re at. I’m happy with the group of guys I’ve got around me. Man, I just love being here. So, it’s been great.

What kind of goals or expectations are you trying to put on yourself as we move into this middle frame here?
Of course I want to get inside of the top 10. The next step is get inside of the top 10, then get inside of the top eight, then keep progressing. The end result is, yeah, we want to be on the box and racing these guys but again, I’m learning each race and growing. As long as I focus on myself, the progress I’m making and just be solid each lap, then I’m happy with where we’re at.

Racer X: Talk about your first three rounds so far and how you would kind of rate yourself or rank where you are so far.
Shane McElrath: I would say I have the biggest growth potential. Results haven’t been where I feel like they should be. I’m trying to be realistic, but I really have a lot to learn also, so that’s where I’m really just trying to be patient with it and take in everything. Last year, I really almost took a whole year off of racing. So, it’s pretty tough trying to come back in and try to learn the pace and how to race again, but we had a good offseason. We had a lot of time to work on it and now, this will be our fourth race in, we’ve made a lot of progress over the first few rounds and results don’t necessarily show that. We’re making changes really every time I ride, so just trying to get dialed in and get more comfortable so I can be more competitive, and more competitive for longer. So yeah, it’s a work in progress.

One of the things that has been going well for you is your starts. You’ve gotten out front a lot. Is that almost frustrating though to see that your starts are there, and then the speed, you end up losing some positions throughout the race? Or are you kind of just taking it in stride?
Yes and no. Getting a good start is a win in and of itself. I mean, yeah, I’ve been struggling with the race after the start, and so it’s like I’m just going to keep putting myself up there and keep taking it in. One of these times it’s going to stick and I’m going to figure it out! Like I said, I’m trying to be patient and not get discouraged with it. I’m happy with my starts and I want to keep doing that because I want to keep learning and that’s really the best way that I feel like I can do that.

Talking about bike setup a little, what specific changes are you working on? Is it trying to get it to turn better, is it focusing on the whoops, anything specific with that?
Yeah, really a little bit of everything. So, I had a pretty good offseason, but everyone knows when you get to the race, you’ve kind of got to change for the tracks. A lot of times it’s going a little bit softer. For me, that’s kind of the case and a little bit stiffer in some cases, but some of our race bike parts are really new, so trying to get them broken in and trying to get them feeling like practice. That’s something that a lot of people don’t realize is that our race bikes stay fresh all the time. So, trying to adapt to that and get comfortable on it, that’s probably been my biggest obstacle so far. But we’re working on that, and it’s going really good! It just takes time, and that’s hard to be patient with it but I’m working on it.