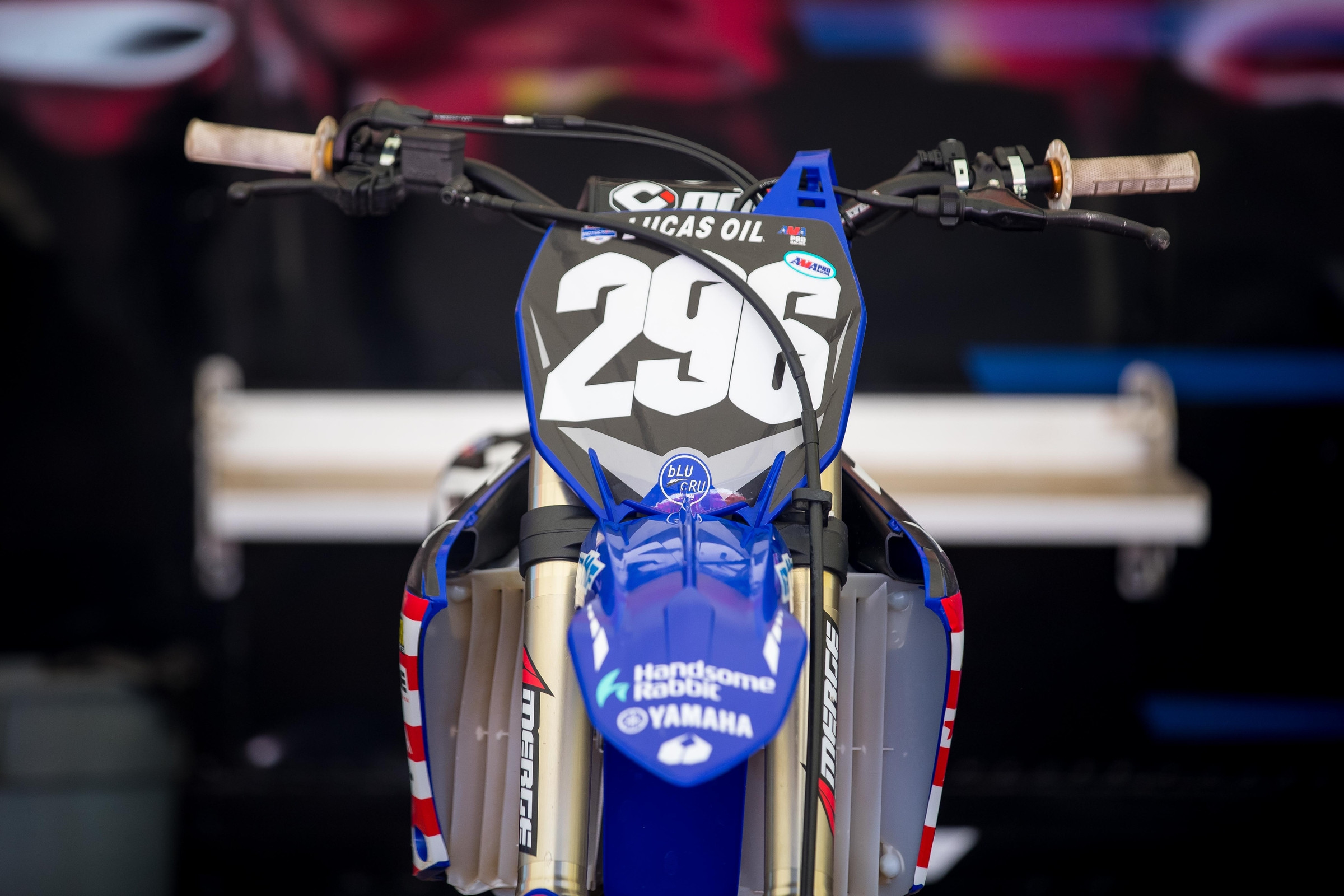 Do you ever go to a round of Monster Energy AMA Supercross or the Lucas Oil AMA Pro Motocross Championship and wonder who all the privateers are and where they come from? If you don't follow the sport in an in-depth way, you may not recognize every name entered. Ryder Floyd is a young rider who I've known since he was a little kid growing up in Paris, Texas. You may not immediately recognize his name, but you've probably seen him race. Let's get to know him.

Ryder grew up in northeast Texas in a small farm town with a lot of his family raising cattle. His first dirt bike was a KX65 and his dad, Scotty, built him a little track in the yard.

“I rode laps around the house for the longest time,” Floyd said. “Then finally I started riding the little track. I pretty much rode there and then eventually I went to North Forty Cycle Park in Sherman for the Bike Week and I raced. That hooked me. I was five or six and I got second. From there on I was eaten up with it. I loved everything about it. I remember I was so nervous on the gate. You would have thought I was lining up for a supercross. There probably were only three people on the gate.”

The area Floyd grew up in is rural, and motocross tracks are few and far between. “It was good. It allowed me to grow up,” he said. “It definitely made for long drives going to the track.”

Floyd started hitting a lot of the local races, including the Full Moon Night Series at Badlands, the Freestone MX night track, and numerous others. As Ryder got more into racing, he of course found the pro races on TV.

“I remember watching Ricky Carmichael, Chad Reed, and James Stewart. I was absolutely hooked on watching those guys outdoors and in supercross,” Floyd recalls. “In 2006 I went to my first supercross in Dallas. It was the year Ricky hit the boat. That was my first time seeing it in real time. Of course, we had the Freestone National in 2007. I got a picture with Ryan Villopoto when he was the #51. From there I started watching and keeping up with it. I still watch every race I can find on YouTube.”

“Ricky was a man's man when it came to racing,” the Texan said. “No matter the situation he seemed to claw his way to the front. I was a big fan of James' style, too.”

“For a long time, I just rode how I was taught,” Floyd replied when asked if he modeled his riding after any of his favorite riders. “I'd say I try and take things from everybody. I've watched a lot of Cole Seely and Eli Tomac. I try to piece a little together from each. It's tough to do. I've definitely changed and grown, but there's no specific rider I'm copying. Mixing it up and doing my own thing. The first person I ever went to for dirt bike technique lessons was Michael Dean Gage in Gilmer, Texas. He was the first person that taught me to use the brakes properly and have proper form. I'll never forget, he calls it the gunfighter position. I remember doing braking drills in a straight line, working on the fundamentals. It's so crazy now that I'm older. You don't realize how important that stuff is. That was a huge help to me. Before that it was just, ‘Go as fast as you can, and then go a little faster.' After that first lesson my dad drove all the way back home and tilled a straight line. We did that drill the rest of the day.”

When asked when he started taking racing seriously, with an aim to go pro someday, Floyd revealed he knew after racing the A Class at the AMA Amateur National Motocross Championship at Loretta Lynn’s Ranch.

“Being a kid from a small town, it's not easy,” Floyd said. “It's not cheap to do. At the end of 2017 and going into 2018 I started taking it seriously. I started training and riding with John Short. It opened my eyes to the fact that it is possible to go pro. It's up to me how far I take it. I listened to John. I started learning. I was fresh out of high school, 50 lbs. heavier than I am now, just out of shape. I was just a normal kid. I really enjoyed it. I was getting faster. It gave me a purpose. I was chasing a goal.”

In 2019, Floyd raced the Supercross Futures in Houston on a Maxim Honda 250 and finished fourth. Three days later he flew to Canada to take an opportunity from Manluk Racing to fill in for their injured rider. It was so last minute that team owner, Frank Luebke, didn't even know what Floyd looked like! He had to send him a selfie so he could find him at the airport.

“I was young and I wanted to do it,” Floyd said. “It was one of the best things that ever happened to me. It was a crazy experience and super motivating.”

Floyd won the first round of the arenacross series in the Rockstar Triple Crown Tour in the 250 class. Making the win that much more impressive was that he’d gone from a Honda to a Yamaha, a bike he’d never even ridden until practice that morning. He also raced the 450 class that night, finishing sixth.

“In my eyes I feel like that's where my professional career started,” he recalled about the night. “It was the start of the journey I'm on now.

He went on to race in Calgary, Prince George, and Manitoba, where Ryder pointed out, Steve Matthes won his four titles. Unfortunately, Ryder broke his wrist at Gopher Dunes in the second moto.

“Honestly, it was all rider error. It was on me,” he said of the injury. “I hadn't matured on the bike. I was trying to go as fast as I could, and I wanted to show the team we could do it. I was pushing it harder than I should have.”

Fortunately, Floyd was able to heal in time to race the Monster Energy Cup Futures Class.

“Leading up I was feeling pretty good on the motorcycle and making progress,” he remembered. “Being in the stadium was crazy. I got a good start, led for a little bit, and then rode second behind Jett [Lawrence] until the last two laps. I was being a little immature and thought I could pass him. I washed out in the corner, and I remember how tired I was when I picked the bike up. The feeling of leading was indescribable.”

In 2020, Floyd was back with the Manluk team and lined up for his first professional supercross race in Tampa, Florida. A broke ankle in qualifying once again sidelined him for the season before it even began. He took the time to heal and then his first day back on the bike he broke his collarbone. After a lot of time off it was really tough getting back to the level he had been. He chose to ride some of the Lucas Oil AMA Pro Motocross Championship to get back into racing and get his fitness back. After that series ended, he came back to Texas and raced some money races, including the Texas Pro Challenge at Swan MX. Floyd says the winning and battling up front he did helped him come into 2021 with some momentum.

Going into the 2021 supercross season he got the opportunity to race for Manluk/Merge Racing/Rock River Yamaha alongside Alex Martin. He was riding with Mitchell Oldenburg daily to learn and train. Supercross was still new to Floyd, however, and once again, he crashed and went over the bars. The bike hit him in the back, breaking and displacing his shoulder blade. The doctor told him six weeks and it should be good, but Floyd continued to experience pain and felt something wasn't right. After multiple doctor visits, he was told it was fine. He went back after six weeks, and the doctor told him he needed surgery. A six-week recovery turned into seven months. It was time to start over, again. It was another learning experience, and Floyd says he now knows to get a second opinion.

Later in 2021 he tried to go race the Canadian Nationals. He drove his van from Texas all the way up to the Canadian border. Once there, he was told he could not go into the Canada due to COVID-19 regulations. He had to drive back to Rock River's shop in Wisconsin to unload the race bikes and parts in order to crate them up to be shipped. They had loaded most of the team’s race equipment in his van to take across the border. They were going racing in just a couple weeks. Ryder proceeded to drive back to Texas and prepare to race the Spring Creek National. The time off the bike and over-training took its toll on him and led to what he called a rough weekend.

“That was the end to the start that never happened,” Floyd says. “My season really ended at the end of 2020.”

Thankfully, Floyd’s story is just beginning. In 2022 he will line up for the 250SX East Region, riding for Ford Brother's Racing. Bryce Ford and the Ford family have really stepped up to help Floyd’s program and to get him racing.

This bend in Floyd’s journey marks the beginning of the climb in what is a long-term plan. Floyd’s goals are to stay healthy and make every single race.

“My goal is to not be intimidated. To show up and show out. Do my best,” he said.