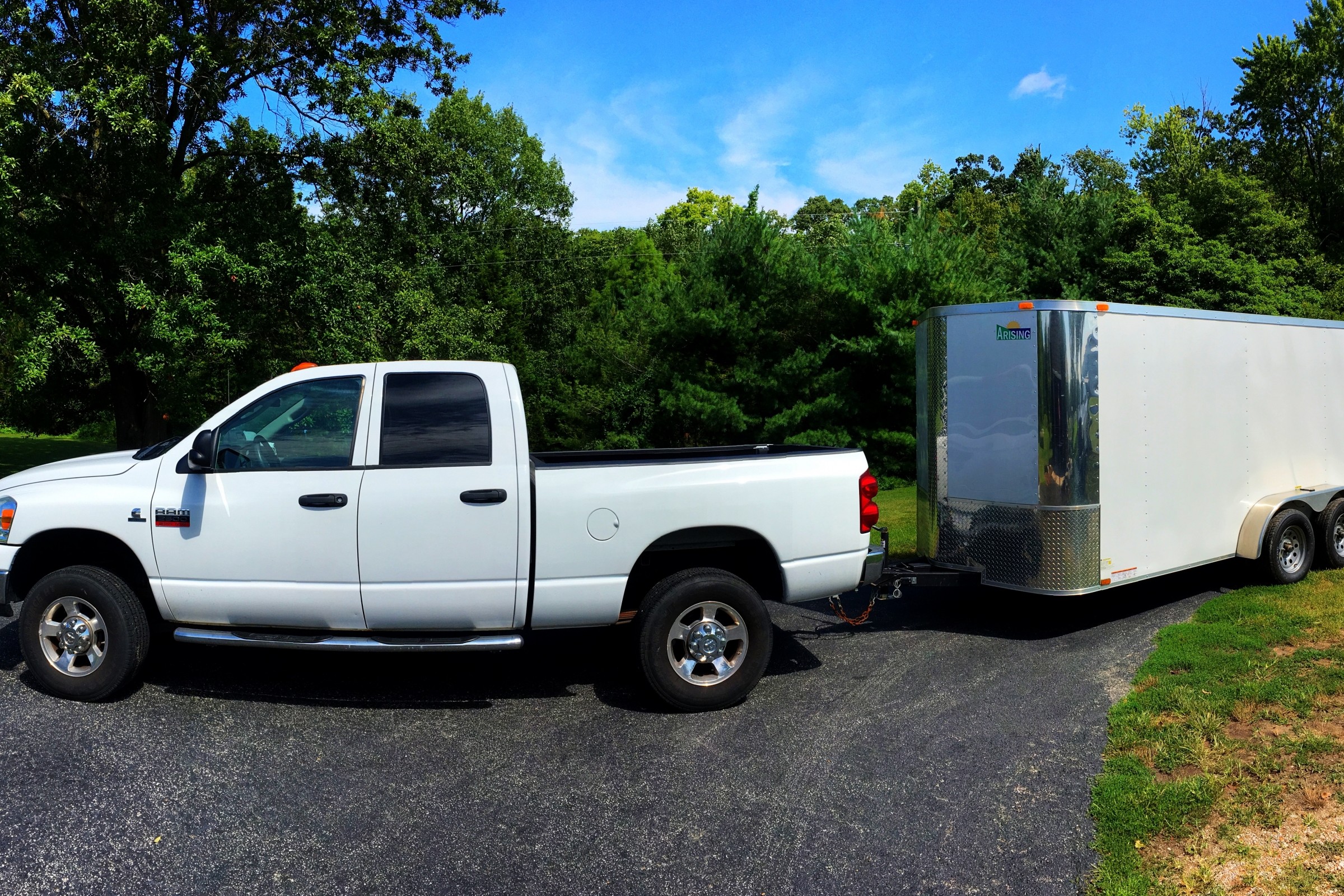 If you follow us on Instagram (@racerxonline) you may remember a fun project we did called the “Privateer Road Trip,” where we joined Lucas Oil Pro Motocross 450 Class privateers Theodore “Bubba” Pauli and Michael Akaydin as they traveled to Maryland for the 2017 GEICO Motorcycle Budds Creek National.

Having grown up with friends who reside on “Privateer Island” (such as Pauli), I’ve always had a soft spot in my heart for those who don’t find themselves with paid contracts and tricked out motorcycles. I’ve spent numerous nights on the road with now retired privateer Justin Freund and his family, so I know how gnarly these trips can be. I used our social media channels as a platform to document this crazy, yet incredibly fun, adventure. Here’s a little bit of a journal type log of the trip.

This adventure began in the state of Illinois, approximately 30 minutes from St. Louis, Missouri. Being that it’s allegedly a 13-hour drive from Illinois to Maryland (I put allegedly in quotes because this trip ends up being A LOT longer than the estimated time) and riders need to be at the track on Friday, I headed to Bubba’s house on Thursday morning so that we could load up his truck and trailer with all of his equipment, plus my stuff, and his mechanic Jason Watkin's stuff, and hit the road. The original plan was to leave his house at 10 a.m.—naturally I didn’t pull into his driveway until 10:30 a.m.

It’s now 11:15 and dirt bikes, bags, more bags, pillows, blankets, coolers, food, one more bag, and everything else you can imagine are loaded up into Bubba’s truck and trailer. Well, all except one thing … ME!

(Side note: Normally when I travel to the races, I drive my van and getting in and out is a breeze—or as much of a breeze as it can be for someone of my physical inability. Yes, I’m in a wheelchair. It’s not nearly as easy to get into Bubba’s truck, though. It’s okay to laugh at this, I did).

We had to figure out exactly how I was getting into this tall Dodge Ram diesel truck. Yeah, good plan, Wheels. You really thought this idea through. Fret not though, one big fireman lift later and I was planted in the passenger seat—my home for the next 13-plus hours.

Next stop: Louisville, Kentucky, where we would pick up Michael Akaydin, his wife Maggie, and their dog Diesel. Five people, one dog, three dirt bikes, and a bunch of luggage packed into a truck and trailer. LET’S DO THIS!

By the time we made the five-hour jaunt to Louisville to pick up Michael and his crew, we were all starting to get rather hungry. Luckily, there was a Qdoba down the road, and we all know how delicious burrito bowls are, so we stopped to get a quick bite to eat.

“Hey guys, umm … how do I get out of the truck?!” No problem, another fireman lift and I was back into my wheelchair! That was cool but when lunch was done, we realized stopping to eat and loading up the Akaydin clan’s stuff had set us approximately two hours behind schedule.

Road trip life is actually pretty fun. Anyone who has ever traveled with a group of people can imagine the random conversations that can pop up at any given time. Due to this being a family website, we probably won’t relive any of these. I guess I don’t really need to rehash much that happened in the truck exactly. If you followed along via Instagram you saw the silly videos on our story, and update videos on our timeline.

Friday morning at 5 a.m. we finally arrived at our hotel! That estimated 13-hour drive, somehow turned into about 17 hours, and we ended up arriving to the hotel as they were setting up breakfast! Time for a quick nap and then to the track to get everything set up for the weekend.

We slept for about four hours. Weege would be proud, we literally set our alarms just late enough to still get free breakfast from the lobby. We arrived at Budds Creek around 11 a.m. or so and after getting parked I pretty much split from the group for a while to handle my normal Friday social media duties at the track.

After the day’s tasks were complete, it was time to leave the track to get dinner and some much needed rest for Saturday’s racing. In order to save our pit spot at the track, we left Bubba’s trailer parked in the Budds Creek pits. This now meant that we were faced with the task of getting my 350 pound chair lifted up into the back of the truck, and by “we” I mean “they,” as I yet again was fireman lifted into the passenger seat. By this time, I’m now beginning to feel more like a sandbag than an actual person with as much as I’ve been tossed around.

During the drive back to the hotel and to get dinner, it started to rain. I’m not talking light rain either. I’ve been to Maryland twice in my life now and I’ve learned that immaculate amounts of humidity then lead to hard rain. No big deal, right? Well, my chair is now chilling in the back of a pickup truck completely exposed to the elements. Luckily near the restaurant was a gas station that we could unload my chair and take cover until the rain slowed down enough to wheel over to the restaurant.

Day 2 really wasn’t that exciting. Friday is a calm day at a Lucas Oil Pro Motocross event. Just your basic pit set up, tech inspection, some last-minute bike maintenance, and then scoping out the track.

Yeah! It’s finally race day! After a good meal and a full night’s rest, followed by another free breakfast in the hotel lobby, we get to the track on Saturday at approximately 6:45 a.m. I did a few social media update posts before I split away from the group again to handle my typical race day social media tasks.

Throughout the day, I make a point to check in on Bubba and Michael to see how their day was going and to make more #PrivateerRoadTrip social media updates. After practice was over, I learn that unfortunately neither one of our riders had qualified out of practice and must race the 450 consolation race. We do another quick update and I wish the boys good luck as they head to the gate.

This is where the participation part of the day ends for our privateer heroes, as a flat tire would cause Pauli to DNF and a subpar moto for Akaydin would result in him becoming a spectator for the day as well.

It’s important to note that despite the difficult day and failing to qualify for the afternoon’s racing (thus making zero dollars on the weekend as well) that Bubba nor Michael ever had a bad attitude nor showed any anger (while definitely feeling frustrated I’m sure) in a public setting. They maintained a professional and positive outlook and took in the racing and made the most of the situation—besides, they couldn’t just leave, one of us still had a job to do for the rest of the day.

Sunday morning came and it was now time to make the long jaunt back home. Just 13—err—17 hours in this truck and we’ll be back in our own beds. The trip home was pretty similar to the trip to Maryland—a lot of nonsensical conversations better left off of the internet, laughs, fun with Diesel the dog (who at one point wore sunglasses and also took a nap on the dash—more for our entertainment than his I assure you) and one more final stop at Qdoba for burrito bowls.

After dropping Michael, Maggie, and Diesel off in Louisville it was time for Bubba, Jason (Bubba’s mechanic), and I to make the final five hour stretch home. Thank goodness for this magic elixir that comes in a little blue and silver can, called Red Bull, because that last five-hour stretch went from more fun and laughs, to heavy eyes and just wanting to be in bed.

I believe it was around 4 a.m. on Monday morning whenever I finally made it to my own bed, physically and mentally exhausted, but able to sleep with a smile on my face knowing that another amazing adventure had just been completed.

You’ve now read my thoughts and words on this trip, but what did our main characters have to say?

Michael Akaydin: “Motocross is more than just racing after the gate drops. You learn a lot along the way, the road trips are adventures you’ll never forget, and you meet some cool people.  Although I was disappointed with my riding, I had a great time with new and old friends, and watched the baddest sport on the planet.”

Jason Watkins: “The trip to Budds Creek was an awesome experience. Good times were had, many laughs were shared, and friendships were made. I am stoked to have had the opportunity to participate in my friend’s successful programs and meet a new puppy that happily rode on the dash of the truck.”

Maggie Akaydin: “One girl, four guys, and a dog on a road trip makes for some interesting conversations.”

Diesel the Dog: “Zzzz…” (in four long days, that guy never barked one time, and pretty much just slept.)

Theodore “Bubba” Pauli: “With every adversity comes the seed of equal or greater opportunity. Ironman worked out better! (Pauli and Akaydin would both qualify for the motos the very next weekend in Crawfordsville, Indiana.)

Despite not making the motos, we all still had a pretty fun time at the track and were able to keep things positive. To me that’s the single most interesting thing about life on privateer island: that it’s actually a lot of fun. At times there can be a misconception that these dudes are miserable and just barely scraping by, and while the money is definitely not as prominent on the island as on the factory teams, these riders (and their wives/girlfriends) make the most out of it. Life on “Privateer Island” is gnarly, but it is also a fun adventure that each and every one of them enjoy. If they didn’t, they wouldn’t do this!