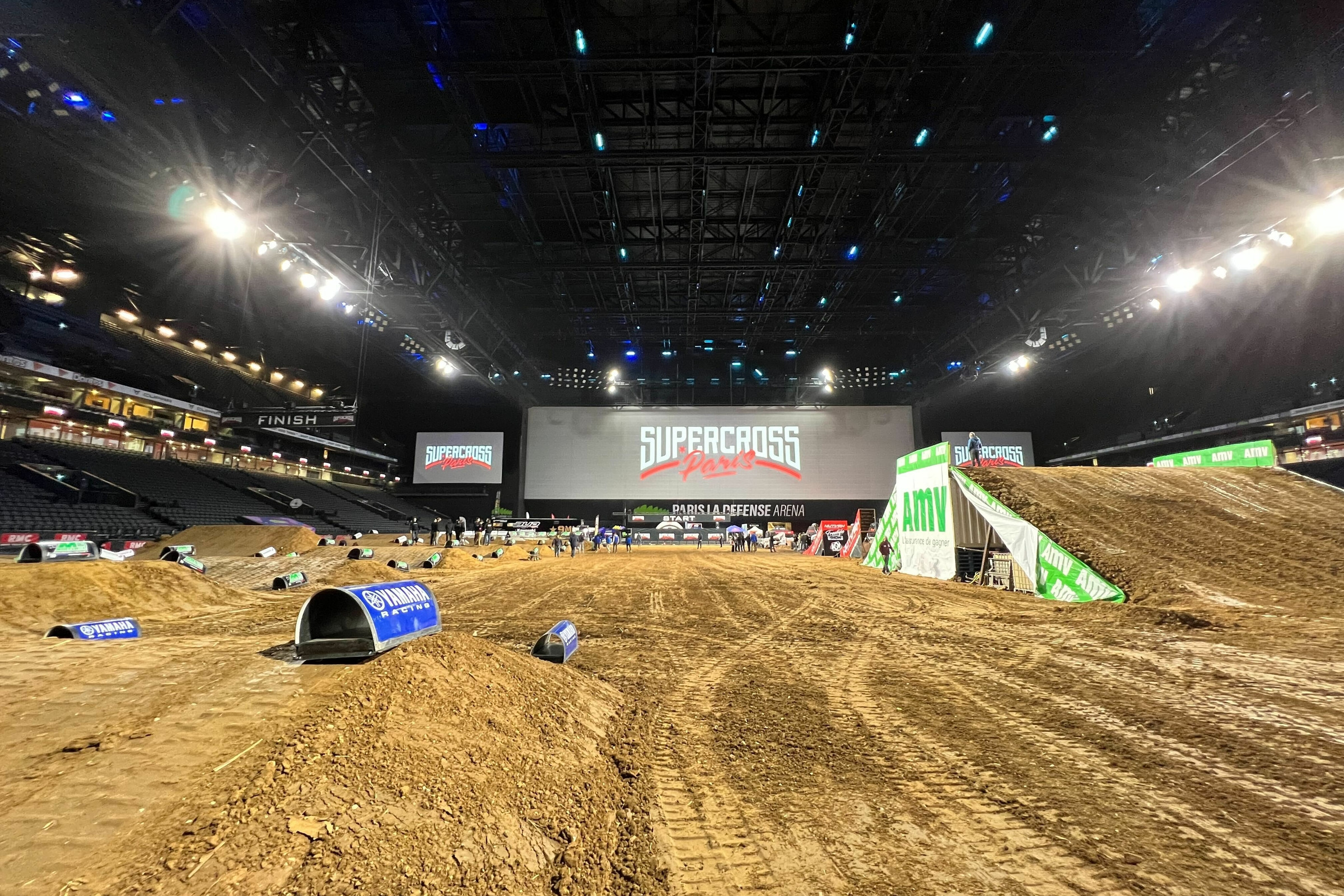 After a year off due to the, well…you know…the Paris Supercross is back this weekend in one of the world’s coolest cities. This event started back in 1984 in Bercy (a suburb of Paris) and has moved a couple of times now but has settled into a still-new arena in the heart of Paris, France. There have been some adjustments. The race usually races over multiple nights, but this 2021 edition will be a Saturday-only event, and the race was moved from the originally-announced date in October back to November to allow for some MXGP riders to attend. I’m sure it will be a barnburner as it usually is.

We’ll have updates right here on Racer X all day Saturday on as well as on Instagram, Twitter, and whatever else.

Took a lot of scrambling to get a rider lineup set for this year’s event. In the end it’s pretty cool, there are enough names to provide some entertainment. This being the only off-season race, I imagine it’ll be a great time for the riders to see where they’re at in terms of preparation although I would argue only four guys are really gonna care about their results this weekend.

The riders are as follows:

Oh yeah, there’s also an MX2 class that will feature American riders Kyle Peters and Kevin Moranz. Joey Crown was supposed to be in, but word is he just suffered a brutal crash practicing and is out. Moranz is his replacement.

Paris always tries to get maximum racing and gate drops out of the stars. Even though this is a one-day format, there will be three mains in what we would call a Triple Crown format, and also a qualifying SuperPole competition.

Schedule of events is as follows:

Each "Main" gives equal points for Overall ("King of Paris").
King of Paris = best score of the three races combined.
SX2: same format except all Mains are 7 minute

You can check live timing and scoring and we'll have a link to watch as soon as it's available.

Musquin is said to be a “flying at the test track” guy this off-season. Brayton, well let’s just say that he’s slightly good at these off-season European races. Marv’s no slouch, obviously, so could be some good racing between these two.

I said in RH last Friday that Brayton was probably the favorite. JT was a bit perturbed at me for saying that Marv isn’t the favorite, by I stand by that. First, JT will just disagree with anything I say. Second, Brayton’s gonna be ready to go and him and Marv will battle it out methinks. We know that the #10 and the #25 will be ready to go, and in a three-race format it could come down to one random mistake, a bad start, or some other chaos.

So what about the other guys? The big debut of Alex Martin on the 450 will come this weekend. I, for one, am VERY excited about this. Now look, the Troll Train isn’t going to peak at this race, WE will be ready for Anaheim 1. We asked his buddy Phil Nicoletti, whose been in the trenches with Alex this off-season, to find out how Troll is looking but all he did was bag on him, so we don’t have a great “feel” for Troll’s Paris “readiness.” Thanks, Phil, as always.

What we did do is a set up a bet between me and Weege regarding Brayton and Troll. The odds have been set at three positions. If Brayton wins and Troll finishes within three spots, Weege has to give me money which will hurt so good. I don’t remember what the actual pay is—read Phil’s column from a few weeks ago to see the full text thread between me [Editor’s note, read UnPhiltered from November 5], Phil Weege, and Brayton. I think if I win, I get Weege’s collection of wrestling action figures and 10 percent of Brayton’s earnings in 2022. Something like that.

Justin Bogle will make his debut on the Twisted Tea/HEP Motorsports Suzuki squad and somehow, he’s never raced this race before. Weird, right? I asked him how he’s feeling, and he said, “I’m amped up to go race the Paris Supercross, I’ve always wanted to do this race and I finally got the opportunity to go and I’m hoping to have some fun and be competitive. It will be good to get a race in with my new team, new bike, and be able to get some data for testing when we get back home as well. Plus, it’s the city of love come on it’s going to be awesome.” Michael Antonovich, of Swap Moto Live, has picked Bogle for the win, we’re told. That might just be because of their shared love of rap music and weird clothing.

So what about the MXGP guys doing some supercross? I’ve seen the great Antonio Cairoli and Febvre race this race before and both guys acquitted themselves pretty well. Plus, the track won’t have the American-style deep whoops so that will help these two MXGP guys out. You’ve got to imagine they’ve tamed things down a little to make sure these guys have no issues jumping into supercross. Plus, Paris is known for its wild show and ceremonies, so I’d bet on some really cool stuff for Tony.

Dylan Wright is a multi-time Canadian Motocross champion, and he recently competed in the final six MXGP races of this season, where he put in strong results.

Chad Reed’s back? Yeah, bro! I’m not sure how this is gonna go, like has he been riding much? What’s his preparation at? Weege says he’s seen him ride at this supercross track at Chad’s Moto40 complex, and the speed is legit. Is he in shape? Is he ready? I have no idea but I’m sure he’ll be very popular with the fans, and he’ll show us some stuff to talk about. Without the whoops there though, he won’t have his usual advantage, that’s for sure. He’ll also be on a KTM, which now looks normal because whenever we see Chad ride these days it’s on an orange bike, but on the other end, it’s kinda weird because Chad never raced KTM’s much in his regular career. Either way it’ll be good to see the #22 back on the track.

Ryan Sipes is here although I have no idea what bike he’ll ride, what class he’s in, what he’s doing but that’s par for the course. A few years ago, they threw a race together in Hawaii and Sipes won it over Brayton! If there’s a race, a gate drop, Sipes will be there!

Don’t sleep on the usual French SX specialists like Cedric “the Entertainer” Soubeyras, Gregory Aranda and the rest of the guys that spend all year round riding these tight tracks. They’ll get good starts, they’ll be in the mix here and there, and the fans will be stoked. It will be good to get back to Paris this weekend!