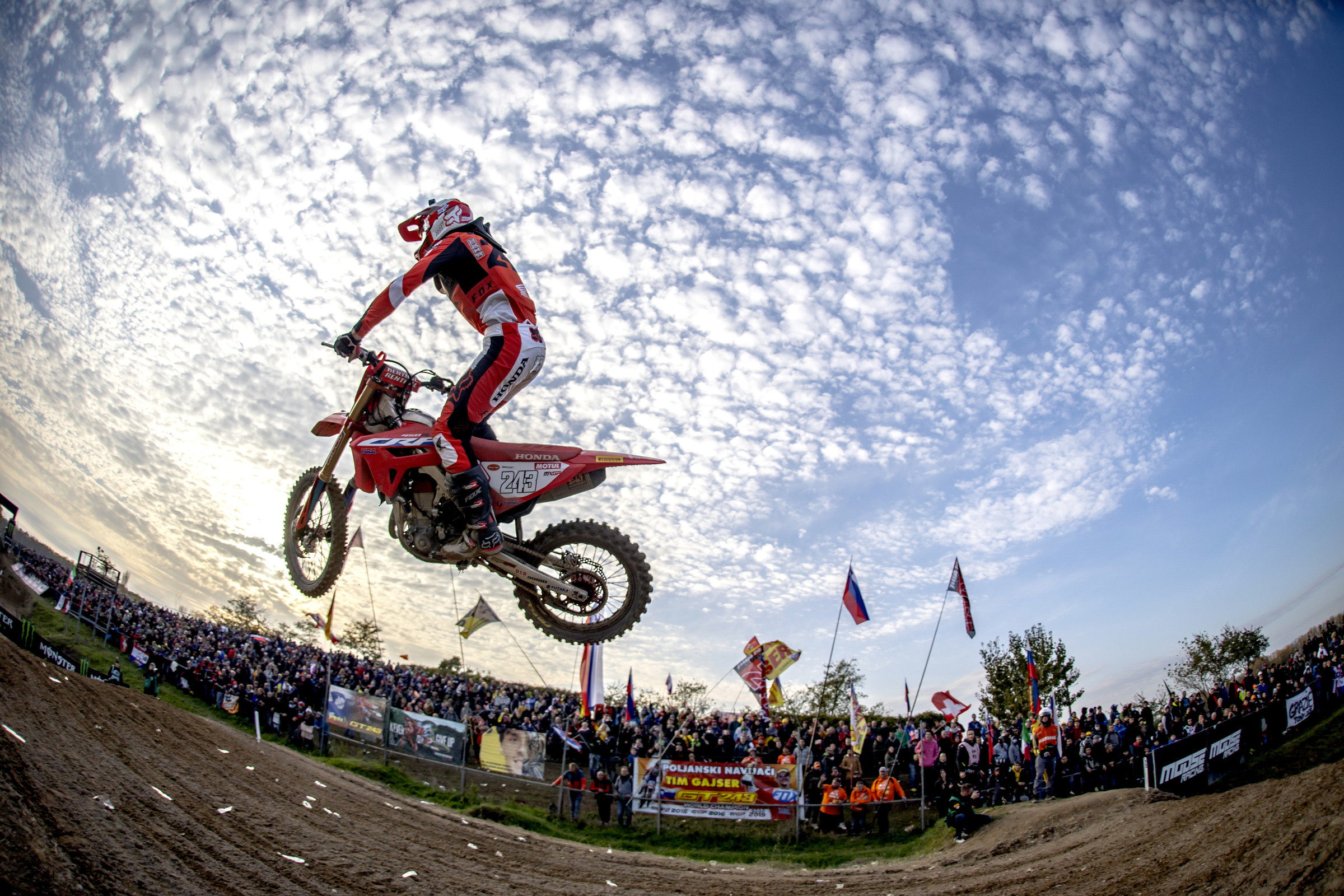 Between Gajser Gracious in Defeat

The 2021 FIM Motocross World Championship (MXGP) season for the two riders who just missed out on the championship is going to be viewed with many “what ifs.” For Romain Febvre, what if he had won a few more races when he had the chance? And for Tim Gajser, what if he didn't break his collarbone halfway through the championship? As much adversity as eventual champion Jeffrey Herlings had to overcome, there were similar sentiments for both riders who fell short.

In Gajser’s case, 2021 will appear like an unsuccessful defense of his 2019 and 2020 world titles. The three-time MXGP champion (2016, 2019, and 2020) had enjoyed a remarkable run of good health and immense speed en route to back-to-back championships along the way. He sat within one point of the championship with two rounds to go, but a costly five-position penalty after cutting through the second turn at Sunday’s MXGP of Lombardia likely ended his title hopes. Still, he had a very strong season despite riding injured much of the second half and leaves 2021 behind with a new fire to get back to the top. After his second-place overall finish at Wednesday’s finale, we caught up with the Honda HRC man to get his thoughts on it all.

Racer X: So, second overall today, third in the world championship. I’m sure it’s frustrating to know you’re not going home with a world title, but you were so close in the end, and it was a great season overall. Just kind of sum up your entire season for us.
Gajser: Yeah, it was a crazy season you know. We have some nice battles also. You know, the pressure for the last couple of GPs was high. From last Sunday after I lose a couple of points from the penalty that I got, it was kind of like I was back on the ground. I knew that it was still possible, but we all know that 15 points in just one Grand Prix is difficult if everything’s normal. But anyway, overall, with the season we had a lot of ups and downs. I think the speed in the beginning of the season was good. Then, with the injury, with the broken collarbone, I was kind of like struggling for a couple of GPs. Like from that injury until the end, I didn’t really feel like myself. Even I was getting arm pump in the first motos and then for the second motos I was feeling a bit better. I could relax a little bit. But yeah, I learned a lot from this year and it’s definitely difficult to accept but that’s how it is. That’s motocross. Next year, we’re going to have another chance.

Just talking about today, you were I think seventh or eighth in qualifying, and I know you had crashed on that one lap. But what changes on the bike, or maybe some things that you did yourself, helped you turn it around for the motos?
Yeah, I’d say that this season I was struggling to make one lap in the qualification. I was always around sixth or fifth. I was second a couple of times. I even have one pole if I remember correctly. But yeah, didn’t ever do a great lap to put all the sectors together. But then in the race I know that I have speed. We made some changes that were positive for the races, so I felt really good. Riding was good so I was definitely happy to finish with good riding and a good feeling so that we go with the confidence into the offseason. It’s not going to be that long, you know. We’re going to start normally next season at the end of February, so we just have three months. So, a little short offseason, a little bit of holidays, and then we are back.

You would have ended the season in Argentina [in December], so it would have been an even another month of racing and a shorter offseason. How difficult is it when you’re in a title fight like this to have the season change midway through and to go to different tracks and different places with a tight schedule while battling for a title?
Last two seasons were difficult because usually we were starting the season in the beginning of March and ending the season like in September, but now we have like a full 12 month season with the preparation. Because usually you start at the end of November with the training and the preparation for a new season, and now we are almost into the middle of November. So basically, the season was a full year. But it was also difficult with the COVID[-19] and everything for the past two years. Hopefully life is going to go back to normal. It’s slowly starting to go and hopefully next season we’re going to have a normal season with a full weekend of Saturday and Sunday, end then ending the season also a bit earlier in the end of September.

Reflecting on being back-to-back world champion coming into this year, you miss out on the three-peat, but you’ve had three seasons now where you’re right in the title fight all the way through. Just kind of reflect on these three seasons and how strong you’ve been over these three years.
Yeah, you know 2019 and 2020 was just incredible to win back-to-back titles. And also, this year, it was going good until the injury. I think we were just past the halfway point, I think Riola [Sardo] was like round 11 or something, so I was also having the red plate and a comfortable lead. It was over 28 points or something like that. But like I said, with motocross, anything can happen until the end. We all know that. So yeah, a bit of bad luck but that’s how it is. I’m still happy to walk away from this season healthy. That’s what is the most important thing. I’m not happy with the result, a bit disappointed, but that’s how it is. I think I just have to sleep, forget these things, and just focus ahead.