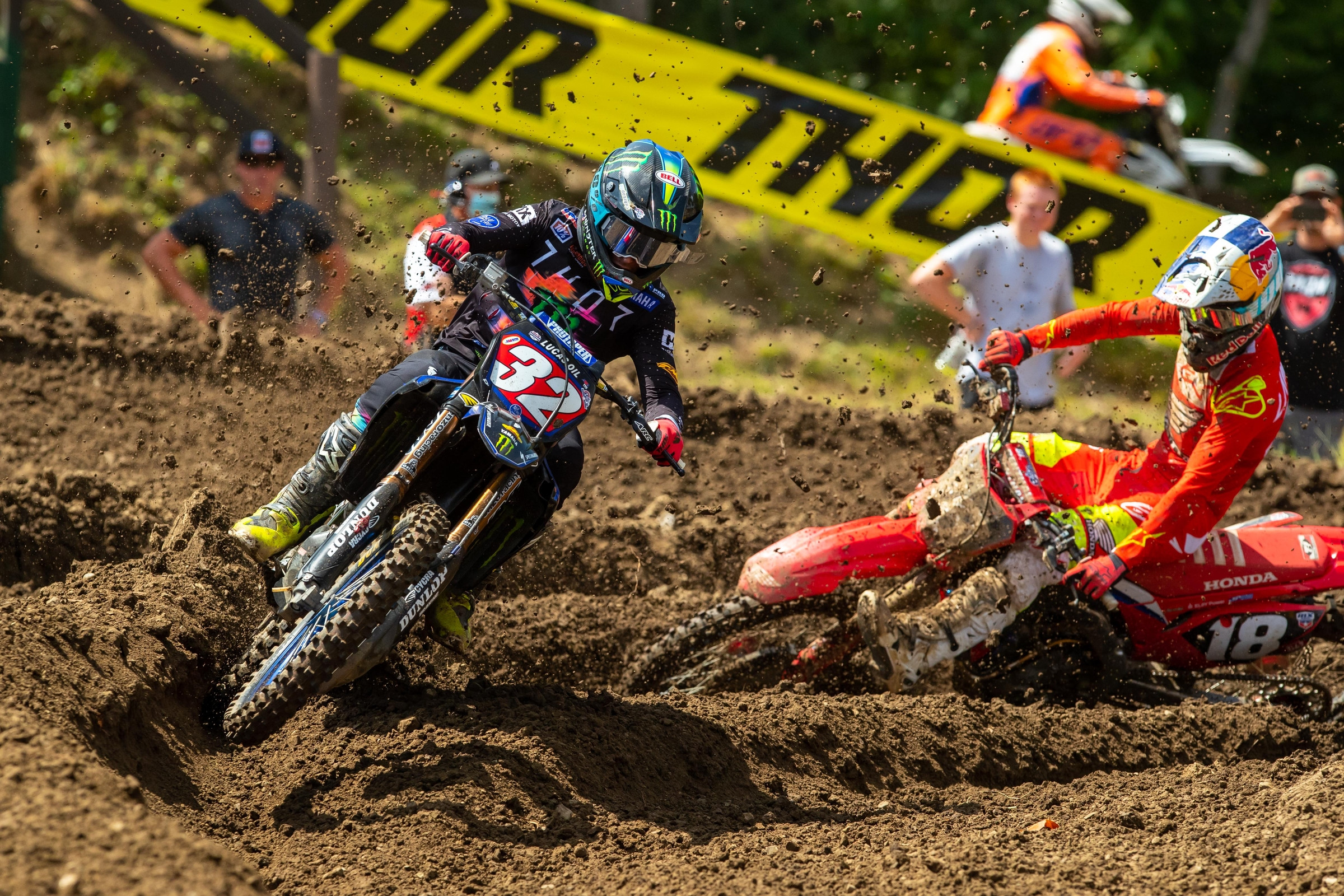 Since returning from the mid-season break, Justin Cooper has slowly lost points off of his eight-point advantage to Jett Lawrence in the 250 Class championship. Suddenly, after a 4-4 performance over the weekend at the Ironman National, Cooper watched a three-point advantage turn into an 11-point deficit when coupled with Lawrence's 1-1 and retaking of the championship lead. Cooper has been dealing with an illness which has hampered him the last few weeks, and now only has two rounds left to turn the ship around. After a frustrating day at the races at Ironman for the Monster Energy/Star Yamaha Racing man, Cooper spoke with the media via Zoom about his situation.

You lost your control of the red plate. I know it’s probably not what you want, but you did do all you could. You still got another podium. You’ve been on the podium every round this season. But you’re kind of looking up now with these last two rounds. What’s your approach? How was the day for you?
Justin Cooper: It was a struggle all day, but we’ve got to take what we can get. We just didn’t have it today. We just got to keep focused and give it everything we have going into these last couple rounds. It’s definitely tough. We’re going to come into these next two rounds and see what we can do, for sure.

You said that was all you had today. The last couple weeks I know you haven’t been riding at least to the potential of what you’ve rode previously in the season. Anything going on? Any bike issues?
The last couple rounds have been rough. It’s a long season and it’s kind of been spiraling out of control these last couple rounds, but we’re doing our best every time out. The sickness I caught last week, I really wasn’t feeling too good at all this week, either. So, I didn’t get much time on the bike and was kind of just not really myself out there today. We’re going to get some time in back in California this week. Get back on the bike, get back to the program and come out swinging for Pala and make this thing come down to the wire.

You mentioned being sick and not being right where you want to be. You’re off in practice where you’re normally awesome in qualifying, and Jett’s got you. Then you lead the first moto. What’s the thinking there? Are you like, hey, I got this, I can do it? Or were you kind of thinking to yourself, with my lack of preparation and getting over my sickness, I really don’t have this but I’m going to see what I’ve got?
Yeah, of course just going to give it everything I have every time out and if I don’t have it, I don’t have it. That’s kind of what happened today. Very frustrating, but I did what I could. I gave it my all in each moto and was kind of floundering out there after about 15 minutes. It’s a bummer and not how I planned the day to go, but we’re going to keep fighting and just make sure we keep giving it our all. That’s all we can really do. We can’t be mad at that. Just going to keep giving it my all. As far as qualifying goes, I’m not really worried about it. It was fine to qualify third. I know I can put down a lap. That hasn’t really been my problem this year. It’s just being strong for both those motos, which I wasn’t today. Going to keep focusing on that and do my part there.

I know that supercross and motocross are completely different things, but is there anything that you learned being in the championship battle in supercross, winning the title or anything that you can learn that will help you to finish off these last two rounds strong?
It’s a good question. I’ve been in a few championship battles the past couple years. The experience you gain from that is pretty monumental, I feel. Obviously, it was a pretty close battle in the championship I had this year in supercross. I had a bunch of races that really didn’t go my way. Every time I would crash, it would be in the main event or something stupid would happen. It was a lot closer than I feel like it should have been with how good I was riding all year. As far as that goes, it’s really mentally draining going through a championship battle like that and just how it is right now. A lot goes through the mind between these rounds. I’ve been in this spot before, actually pretty much all year. So, it’s really not anything new for me. I’ve kind of learned how to deal with it. It’s mentally tough. I feel like I know how to execute under pressure. I don’t really think it gets to be that bad anymore. Again, just didn’t really have it today. We’re going to have to get it figured out. We have two rounds left and we’re going to give it everything we have and see what happens. Overall, it’s been a really consistent year for me. Just got to keep it that way and really go for these wins the next two races.

What are some of the things we’re going to be working on this week to turn this thing around? Also, the next two tracks, what are your thoughts leading into the final two rounds here?
I’m a California guy, so those tracks, I’ve raced at them a bunch of times so they’re pretty familiar to me. Just more time on the bike this week. I kind of came into this race without any prep since Budds and it really hurt me today. Just going to put some motos in this week and turn this thing around. The day didn’t go as planned, and we got to get back into this thing. We’ve got two more rounds and can’t let it go this easy.

So, is it a lingering illness or is there an injury that you’re carrying on? Is there something that’s happened in the season we aren’t aware of?
Yeah, maybe. It’s definitely been a rough go lately. Just trying to get the train back on the tracks, I guess. We’re coming around. Just got to put more time on the bike this week and really give it a good shot these last two rounds and have more fight.

These last two have probably been the toughest rounds of the season weather-wise, has that made it tougher to perform at your peak?
A hundred percent. These last two rounds have been obviously the hottest ones. Didn’t really come at a good time for me. I’m sure the next two are going to be hot too, so that’s not going to help anything. We’re just going to go back to California this week and put some motos in with the team. We’ll just get back on the West Coast time zone and make sure we’re ready to go on Saturday.