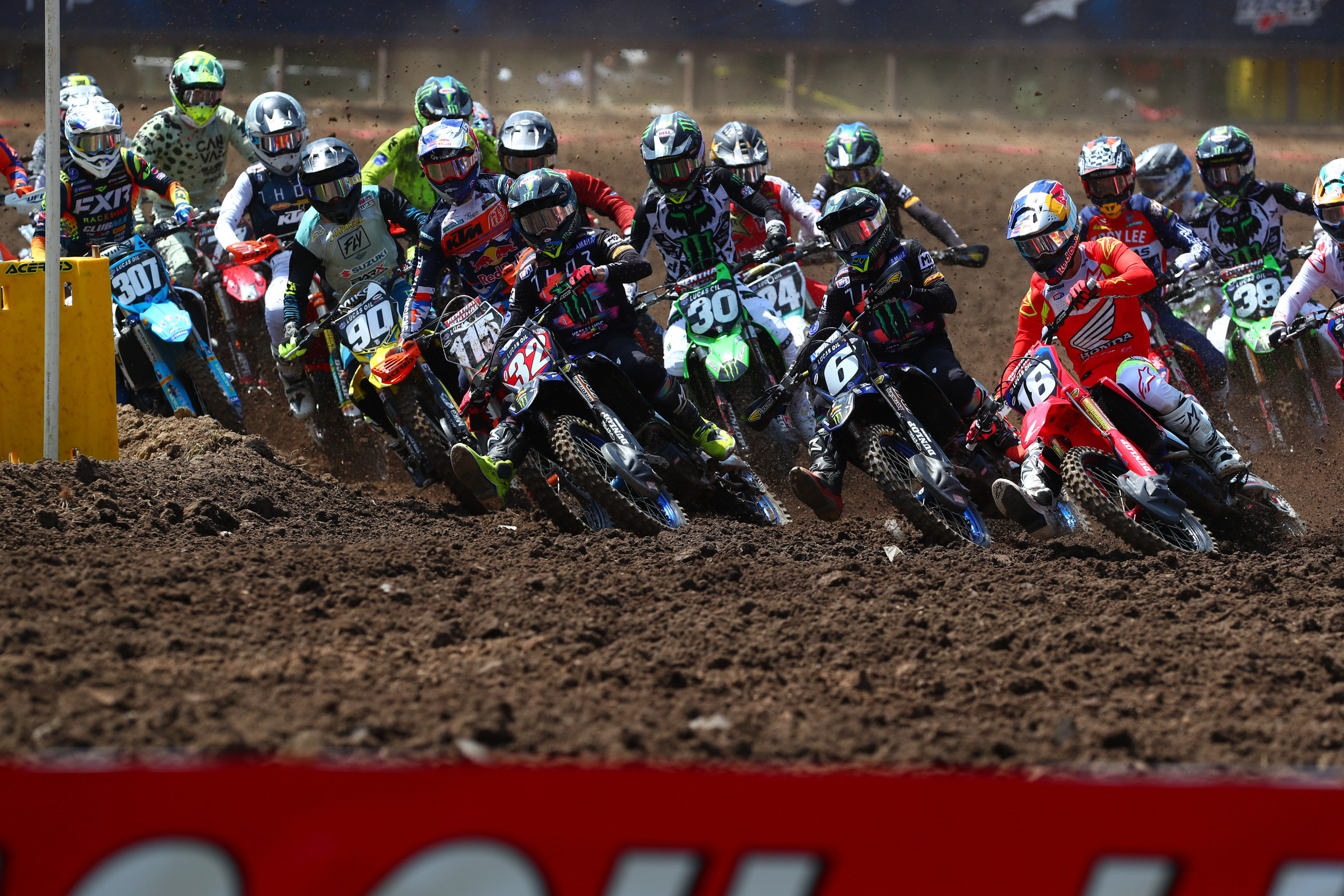 Jalek Swoll, who suffered a dislocated shoulder during the second qualifying session, did the sighting lap but decided to not race the moto. He is out for the remainder of the day, as the six-man roster (three in each class) is now down to only RJ Hampshire.

When the gate dropped on the first moto of the day, Jett Lawrence led the field into the first turn. But right at the holeshot line, Justin Cooper snuck into cross the line first and take the race lead. Lawrence led Cooper, Max Vohland, Jeremy Martin, and Jo Shimoda as Derek Kelley, RJ Hampshire, and Jarrett Frye collided in the first turn and all three had to come back from dead last. Lawrence was able to take the lead from Cooper as they came through the section under Duck’s Truss near vendor row. Martin had made his way around Vohland and then got around his teammate Cooper as they came around past the announcers’ tower/mechanics’ area. J-Mart charged forward as Cooper dropped two more positions due to passes from Jo Shimoda and Michael Mosiman. Levi Kitchen was running in the top eight until he tipped over and dropped back outside of the top 15. He engaged in a battle with Hunter Lawrence for 14th. J-Mart continued to charge and caught up to Jett. He momentarily had the lead before Jett reclaimed it! Martin stayed right on the tail of the #18, pushing the limits until it cost him. Coming out of the Hoosier Hole before Duck’s Truss, Martin scrubbed hard and got launched off his bike, slamming down hard on his left arm. NBC pit reporter Ashley Reynard confirmed Martin suffered a broken left wrist and is out for the remainder of the day. The #6 has had a rough year filled with injuries and will now take time to recover fully as he hopes to ramp up and make a run at both Monster Energy AMA Supercross and the Lucas Oil AMA Pro Motocross Championship. Lawrence went on to win the moto by 8.320 seconds ahead of his former GEICO Honda teammate Shimoda. Mosiman finished on the podium in third in his return to racing as Cooper finished fourth, just holding off Austin Forkner. Ty Masterpool put in a great ride to finish sixth ahead of Vohland, Carson Mumford, and Suzuki teammates Dilan Schwartz and Preston Kilroy. Kitchen and Hunter Lawrence finished 11th and 12th, as Hampshire charged to finish 13th and Frye finished 15th after their first-lap crash.

When the premier class took to the track for their first of two points-paying motos, it was Joey Savatgy who grabbed the holeshot aboard his #17 KTM 450 SX-F. Right behind him was Dylan Ferrandis and Eli Tomac (who both struggle with starts typically) and Chase Sexton. About a lap in, out of nowhere, Ken Roczen came from about sixth or seventh off the start to get into third place as he took it from his teammate Sexton. Then, he moved around Tomac to take over third behind Savatgy and Ferrandis. Suddenly, Savatgy, Ferrandis, and Roczen were all three in the same sections and corners! They came through three-wide back onto the starting straight as Ferrandis took the lead from Savatgy and Roczen followed his title rival past the #17 as well. Tomac caught up to and passed Savatgy as he charged up to the Ferrandis/Roczen battle. The trio traded fast laps, caught and gapped one another for over two-thirds of the moto. They all traded 2:00 to 2:01 lap times. At one point, Roczen took the line from Ferrandis but the #14 found back. The two even almost collided with one another, unintentionally, as they fought hard. Eventually, Tomac got around Roczen to take over second place. Roczen faded to about eight seconds off of Ferrandis. Tomac went at Ferrandis himself but was never able to make a pass for the lead. He lost several seconds late in the moto before finishing second, 4.137 seconds back of race winner Ferrandis.