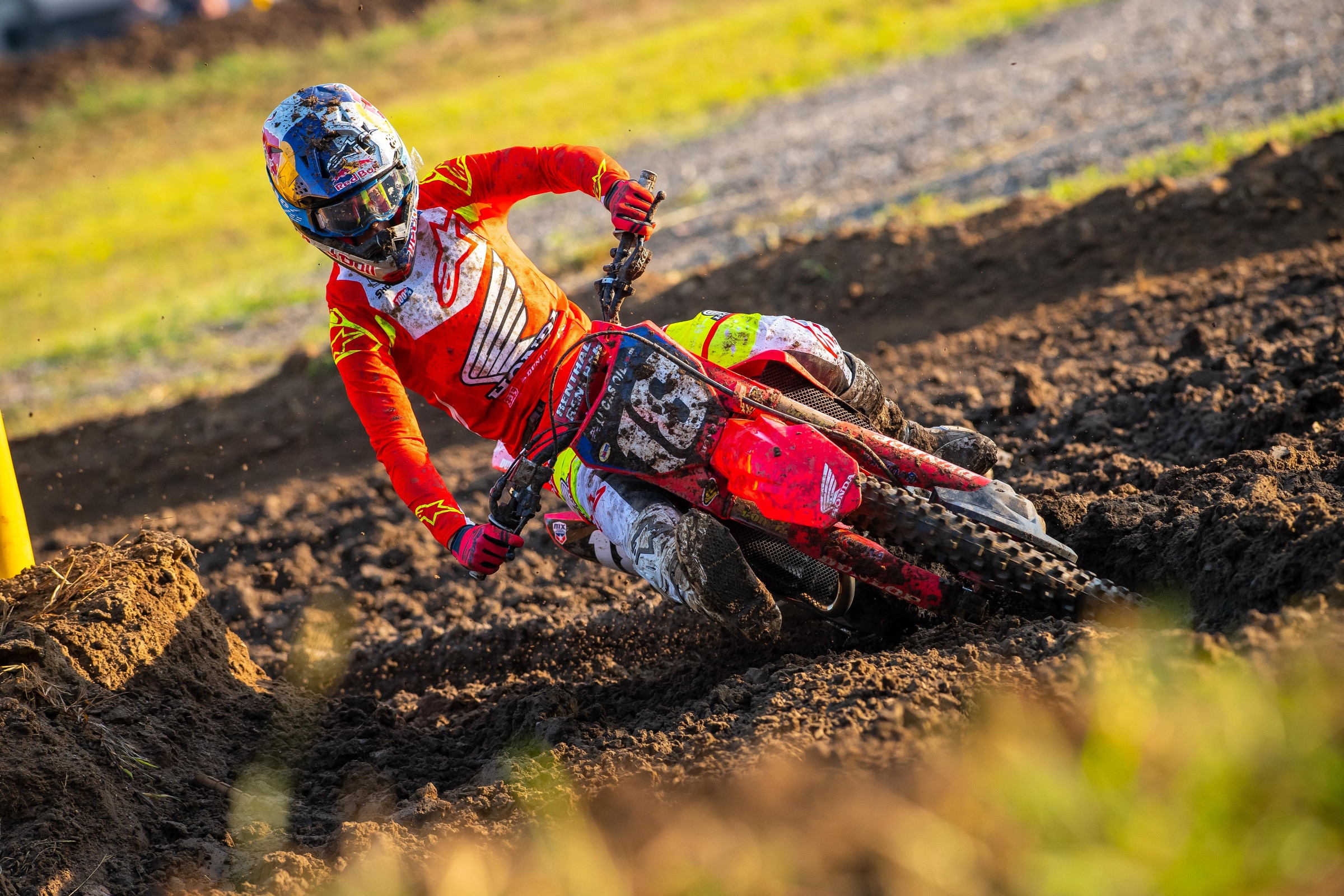 Jett Lawrence and Jo Shimoda led the group around for the first wheels on the ground lap. Once the green flag waved, the duo took off. Lawrence dropped a 2:021.064 as Justin Cooper quickly put in a 2:01.793 to best his 2:07.394 from the first session. Jeremy Martin put in a 2:01.453 to bump Cooper one spot. Jalek Swoll had an issue and came to the pits holding his right wrist. He got off his bike and then was attended to by the Alpinestars Medical Crew for what looked like a dislocated shoulder. Levi Kitchen sat fifth with a 2:03.015, but then Austin Forkner, who had the best ride of his season last weekend at the Budds Creek National, bumped Kitchen back one spot after a 2:02.920. Near the end of the session, RJ Hampshire jumped to fifth behind Shimoda with a 2:02.603. Lawrence put down a 2:00.367 late and it stood as the top time of the 250 Class. This was the #18's second time this season as the fastest qualifier.

Lawrence, who raced at this facility in 2019 (in his limited debut run after Loretta Lynn's) and then in 2020, said he is excited to race today on a track he likes. The 18-year-old also said if he wins, he will be donating his purse money to the Racers 4 Waverly foundation, which was established in order to help those in Tennessee impacted by the severe weather and flash flooding that took place earlier this week.

When the 450 Class A group took to the track, Eli Tomac was the fastest rider early in the session with a 1:59.313. Dylan Ferrandis had a 2:00.585 and Cooper Webb a 2:00.814. Honda HRC teammates Ken Roczen (2:00.886) and Chase Sexton (2:01.328) sat fourth and fifth. Sexton tipped over and his left leg was momentarily trapped against an inside pile off dirt. He managed to pull it out and put down more laps. Right when it looked like Tomac would be the top qualifier, Ferrandis started to really slow down, putting a gap between himself and the riders ahead of him (setting up an open track). Then Ferrandis dropped the hammer, a 1:59.002, to reclaim the lead from Tomac. Roczen put down a 1:59.597 to become the third rider to drop under the 2:00 mark. Sexton’s new best was a 2:00.553 just ahead of Webb’s 2:00.814. At the very end, Joey Savatgy dropped a 1:59.822 ahead of Webb, and Ferrandis put down a blazing 1:58.267 right as the checkered flag came out. The championship leader's time stood as the fastest time of the day.

“I don’t know, I just like this track,” he said on his fast times. “Every year, I can’t wait to come here to Ironman. And my bike is awesome. So, I think it combine for fast laps.”

Ferrandis also acknowledged his displeasure with the amount of saw dust and woodchips on the track, even though he was over a second faster than anyone else. Tune in soon for the first motos of the day!