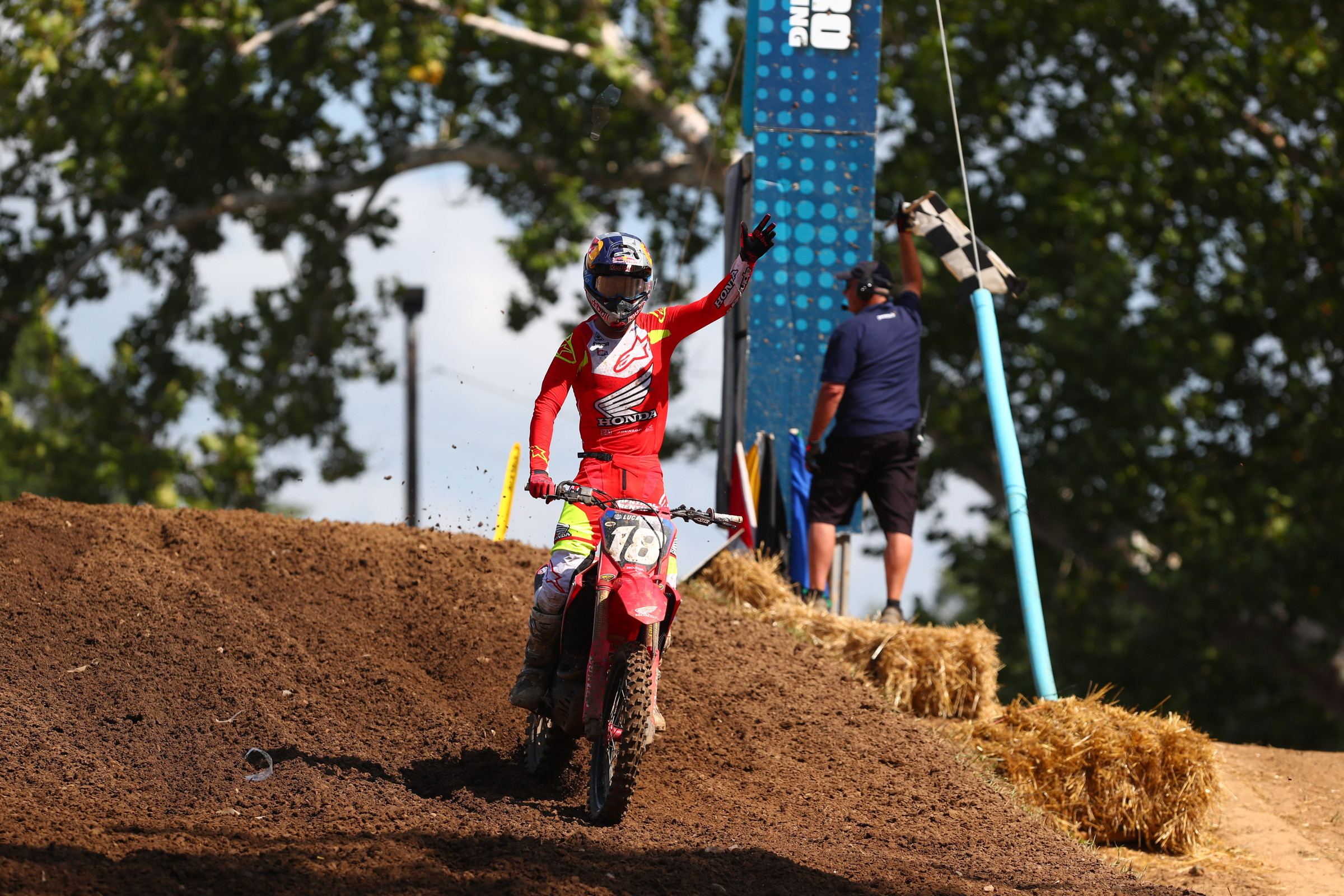 Jo Shimoda claimed the holeshot off the start of the second moto but nearly went down as he hit the berm in the first turn. Behind him was Jett Lawrence, Ty Masterpool, Justin Cooper, and RJ Hampshire. Shimoda led the first few laps, holding off Jett Lawrence but the #18 was able to make a pass as they came through the mechanics’ area. RJ Hampshire got by Masterpool and then he got around Cooper to take over third and went for Shimoda. They would battle for second place for the later third of the moto. Hampshire eventually passed Shimoda after their long dual. Cooper was stuck in fourth as the Hampshire/Shimoda picked up pace as the #32 was left in the dust. Levi Kitchen made his way into fifth after passing Masterpool but then ran into an issue as he slowed up and pulled into the pits. He would eventually return to the track but only finished 11 laps to finish 35th. Masterpool took heat from Forkner, who then stood up the GasGas rider with an over-the-top block pass where he really slowed down and made contact with Masterpool. Dilan Schwartz was running just outside of the top ten when he crashed in front of the finish line and lost several positions not only from the mistake but from a quick pitstop that followed. While Forkner was off-pace earlier this season, he has continued to push the last several weeks. Late in the moto he caught and made quick work of Max Vohland after Duck’s Truss. That section proved to be key today as it was where Hampshire made the pass on Shimoda and we saw great battling really in every moto. As Jett cruised to an eight-second win over Shimoda, the 18-year-old stood up, slowly ripped a tear-off, held it, and then tossed it into the wind as he took the checkered flag. His 1-1 results today were his first moto-sweeping overall, and he now retakes the championship lead from Cooper as he now sits 11 points ahead of the #32 Yamaha rider. With Jeremy Martin breaking his wrist, Hunter Lawrence sits third in points now. Only four motos remain and Jett has taken a step closer to the Gary Jones 250cc National Championship Trophy.

“It’s a great feeling,” he said on his day. “It shows I’m not giving up...hopefully I can continue this for the rest of the season.”

And as promised after being the fastest qualifier, the Australian backed up his promise.

“Whatever I can do to help, I’m gonna do it,” he said on donating his purse money from winning the overall to the Racers 4 Waverly foundation. “We all have good days but we also all have bad days.”

The crowd surrounding the podium began chanting, “Let’s go Jett!” as he walked off the podium.

Shimoda’s 2-3 gives him second overall (tying his career-best from the Southwick National last month) ahead of Cooper’s 4-4. Shimoda said it was his starts combined with improvements him and the team made to the bike in order to make him feel comfortable.

“The improvement on the bike was amazing,” Shimoda said. “It was enjoyable to ride. ...It was a good day for me. Improvements. I’ll do it again.”

Cooper was not happy with his day but knows he can still win the title if he ramps it up for the remaining two rounds.

“Just gotta keep fighting,” Cooper said. “It’s not gonna be easy. Jett was really good today, and I didn’t have anything for him. ...It’s not over yet. Just gonna keep digging.”

After an impressive ride in the first moto, Dylan Ferrandis just barely pulled off the holeshot in the second moto. A big, "Uh oh!" for the competition. The #14 snuck right in front of Cooper Webb to take the top position. After three-quarters of a lap, Webb struck back quickly on Ferrandis when they were near the end of the section after Duck’s Truss. Ferrandis stuck to his middle line as Webb dove to the inside-most line, taking the lead in an instant. A lap later, Eli Tomac (who uncharacteristically got a great start of his own) pulled the trigger on the move Webb did on Ferrandis himself as he bumped the #14 to third. Eventually Tomac made a pass on Webb for the lead. Webb was being stalked by Ferrandis when the Frenchman snuck to the inside of the KTM rider in the turn before the finish line. The two made minimal contact and over the finish line jump, Ferrandis signaled back to Webb as if to say, “That was not on purpose!”

Chase Sexton blew by his teammate Ken Roczen and it appeared he would make a run towards Webb, but that was not the case. Tomac came through with the moto and overall win. Ferrandis came through second, less than five seconds back but the 2-1 from Tomac bested Ferrandis’ 1-2. The win was ET3’s first overall win since the 2020 Thunder Valley National in October when he finished 3-1. Tomac grabbed a couple handful of loud revs when he came through the podium fencing to meet up with his team and the fans. His mechanic Brian Kranz greeted him with a big smile and two ice cold water bottles for the beck of his neck. Tomac hopes he can get one or two more overall wins at the final two races. Ferrandis said afterwards the brutal day gave him issues all day, acknowledging he exhausted himself and left it all out there on the track. Still, his day consisted of second overall and gaining points on Roczen in the standings as he now has a 50-point lead.

“I think it’s just the hard work,” Ferrandis said on his consistency. “It’s finally paying off. I give everything to my sport and I do everything to get to the top. I tried my best. Today was one of the best days. ...It was a struggle. I suffered both motos. ...I didn’t have the strength to fight with Cooper and Eli. Eli deserved it today.”

Webb held strong for third in his best moto of the season. His third-place finish gave the #2 his first podium appearance of the season, and his 4-3 finishes gave him third overall.

Roczen acknowledged the weather combined with the intense battles in the first moto took a toll on him as well.

“The weather today was definitely on the warmer side,” he said. “I definitely felt more fatigued than last week. ...I gave it my best. I tried to make it through, maintain, and ride smart. It wasn’t the best race but at least we are healthy.”