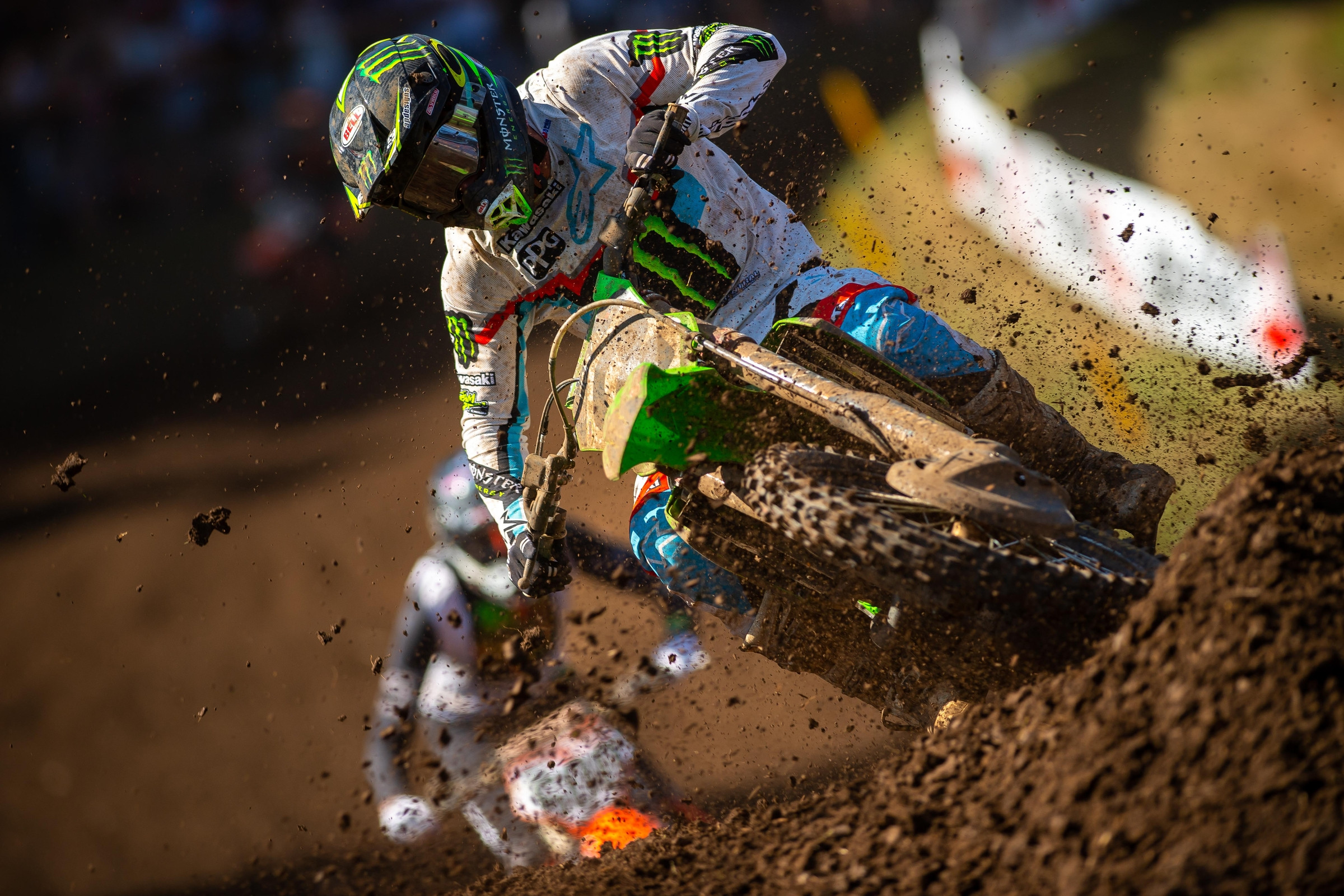 Long-time pro Jason Thomas was on hand for Saturday’s Washougal National up in the Pacific Northwest to catch all the action from round seven of the Lucas Oil AMA Pro Motocross Championship. We fired off some questions and here’s what he saw.

Justin Cooper is determined to get a 1-1 and put his stamp on the series. That might have cost him as he tried to track down Jeremy Martin late and crashed in moto two. We know we have hindsight but explain the risk and reward for J-Coop in Moto two.

Riders always have to assess risk in the moment. If you’re feeling comfortable with the pace and feel like you can push harder without overstepping the limit, then most will take that chance. I think that’s where JC32 was with a few laps to go. He was sitting there behind J-Mart and likely felt there was a little more pace to eke out. That crash was a freak deal and not necessarily a result of trying to close the gap. A crash from pushing too hard would likely be losing the front end in a braking zone or spinning the rear around (like Hunter Lawrence crash). Those are much more tell-tale signs of overriding the track. This one just felt like a random crash in a very unlikely spot.

What’s a start streak and slump like? Jett Lawrence was in a slump. How hard is it to dig out, mentally? Is it better to just try to forget about it?

The tough part about a slump is that it compounds. The more you think about it, the worse it typically gets. They think about it all week, practice starts every day, and then are stressing about it all morning before the race. It becomes the focal point of their entire race. Putting that much worry into any issue will likely further the problem. I do think it’s a good idea to diagnose what’s going wrong but overthinking it doesn’t help in most cases.

Most good starters don’t really dwell on starts. They just let it happen, using muscle memory and reacting naturally versus forcing anything. Dial in the starting process, commit it to a robotic efficiency, and get out of your own way.

Jett seemed happy in his podium interview after moto two. Is that real or is this just a game face so Cooper can’t detect any frustration?

I think Jett is naturally a happy person. I also think that he was delighted with the gift that Justin Cooper handed him. On what could have been a very costly points day, Jett was able to salvage a runner-up finish in the second moto as well as recoup a ton of points on the points leader. I would bet he wasn’t thrilled with his riding, but he dodged a big bullet with Cooper’s late crash. An eight-point deficit is nothing in the overall picture. I could have been nearly a full moto had Cooper stayed upright. That’s a reason to smile in itself.

Talk about the overall intensity and pace throughout the day. Track looked fast and riders stayed close.

Washougal is one of the faster tracks on the calendar. It’s hard-pack surface allows for high speed and the flowing hills don’t dissuade that, either. It’s a tough ask for riders to weave in and out of the shadows while also battling a deteriorating level of traction, though. I don’t think many riders are feeling super comfortable with a high pace on this track but that’s what this level of racing requires. It’s a white-knuckle kind of day when talking Washougal.

This is clearly a hit-your-marks track. How hard is that to do at that level of intensity?

It’s a bit like road racing in that aspect. This track doesn’t reward overriding. There is a hard limit on traction for most corners. Eli Tomac was pushing that limit in the second moto and may have even pushed past it on the last lap. Smooth is typically fast at Washougal but that doesn’t mean you can allow intensity to dip, either. It’s a tight rope balancing act compared to some other tracks. Spring Creek, for example, begs to be ridden into submission. It loves heavy handed throttling. Washougal, on the other hand, wants soft whispering into its ear. It wants a softer approach and rewards a light touch.

Speaking of all that, RJ Hampshire kept it on two wheels and also made the podium. Big deal?

It felt like a nice breakthrough for RJ. He has been so fast, but that speed has come with volatility. His style is loose and wild, a method that Washougal usually punishes. RJ’s ability to find a happy medium was a testament to his adaptation and understanding of a weakness. To be a champion in this class, you have to be able to manage every surface. He took a nice step forward towards that on Saturday.

Did we see the real Marvin Musquin today?

Who knows! I am not sure if it was a return to Marv of yesteryear or only a result of the track working with his strengths. He is so talented at finding traction when others can’t. He is one of the most precise riders in the history of the sport. Time will tell if it was a situational uptick or if Stella found her groove.

Chase Sexton said they cut 5 mm out of his subframe to make the back of the bike feel lower. Surely you ran some cut subframes in your time. Explain what that change feels like.

That feels like a short joke, but I am going to allow it. It’s a bit surprising to hear a rider as tall as Sexton would want a shorter subframe but new-era motorcycles are very rear high-front low as an overall feel. The OEM engineers have prioritized turning over stability throughout the last decade, much to my dismay. I prefer the more balanced feel of a 2008 Honda versus the big shift that began in 2009. Yes, they are easier to turn but asking a pro rider to turn up the pace on a national level track is not met with glee.

Sexton was likely looking for more traction (rear end lower on acceleration) as well as more stability under braking (rear end staying lower in braking bumps). Both of those would be valuable on a track like Washougal. It would be interesting to hear if he made any front-end adjustments to offset any downturn in turning performance. Any time you lower the rear, your ability to steer with the front typically suffers. Balancing the motorcycle is always an exercise in compromise. Changing a setting to address a weakness has an effect on other characteristics, sometimes for the worse. It can be a bit of “pick your poison” if you have an ill-handling chassis.

Sexton also now has a map that caps the RPM of his bike on the start. He said he had been revving too much because he can’t hear his bike. Seriously, how do you sense what RPM you’re revving to with 39 riders on the gas?

It’s not easy. Most riders utilize some sort of indicator these days. It can be a light that alerts when you’re in the desired range or it can be a limiter like Sexton mentioned. Some, like Heath Voss, just turn the throttle to the stops and let the big dog eat. I wouldn’t recommend this approach.

Battle of the titans, eh? Those two have proven to be the fittest riders in the class. They have also shown that they can push to a place others simply can’t. We have come to expect those insane late race laps from Tomac but the real story was Ferrandis’ ability to fight fire with fire. He ramped up the intensity on that last lap, setting one of his best laps of the race. Tomac made a mistake, derailing any final attempts at the win but Ferrandis showed no signs of crumbling under the Tomac assault, either. We are not accustomed to seeing anyone hold off that torrid Tomac pace, but Ferrandis was able to this time. Impressive and also shows why he has nearly an entire race worth of points lead.