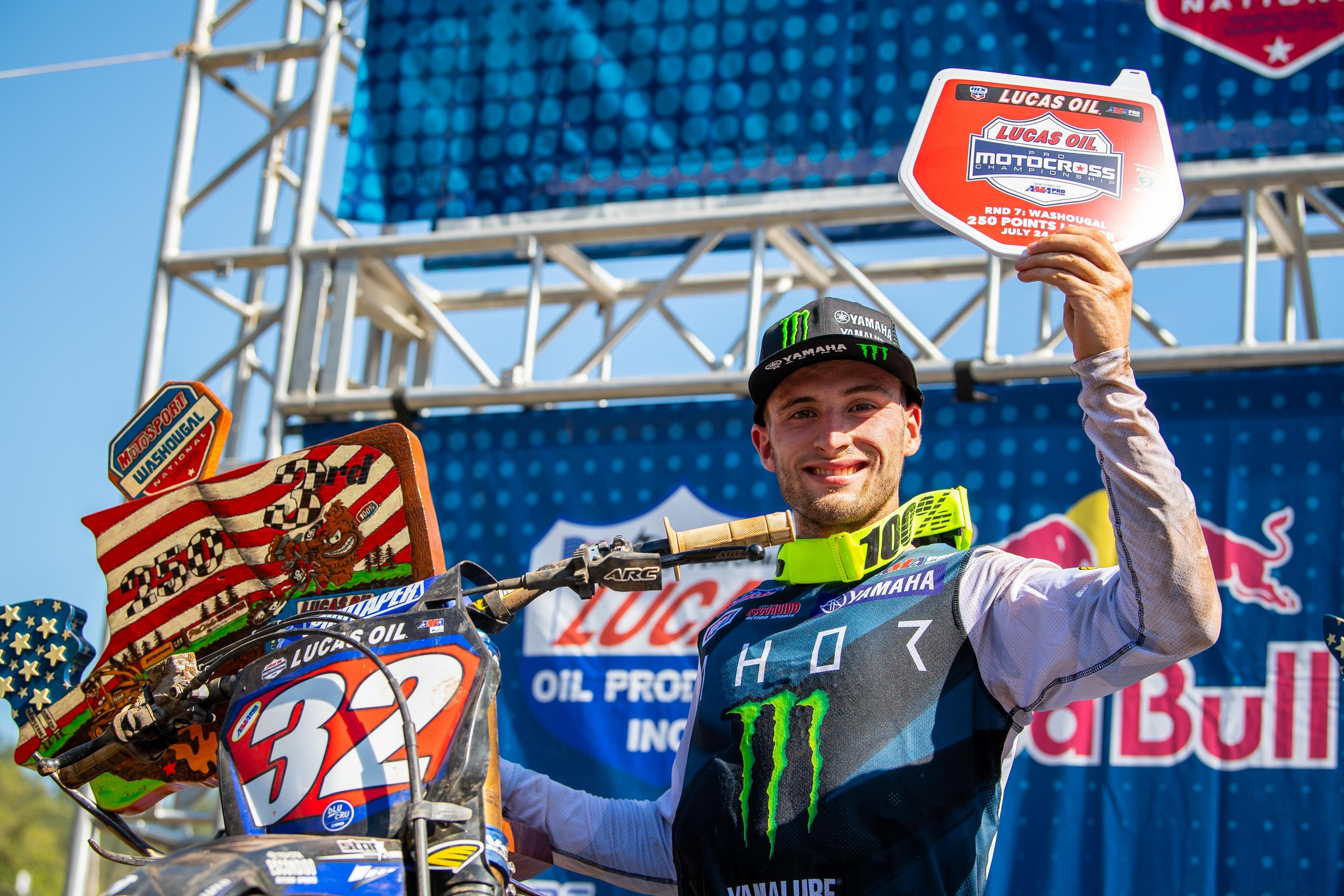 Between Happy in Defeat

A week ago, Justin Cooper took over the points lead at Millville, but his 3-2 scores didn’t leave him happy. His teammate Jeremy Martin tracked him down for a moto win, and Michael Mosiman zapped him in moto two, also. All year, Cooper has said his goal was to do more than just be the consistent podium rider he’s been through the years. He wants race wins. Moto wins. 1-1 days. He went for it at Washougal. After holding RJ Hampshire and Martin off for the first moto win, he ran second most of the way in moto two. Martin was just ahead, and Cooper put in a hard charge late to try to pass his teammate and get the 1-1. Then he crashed violently on an uphill and threw away the overall win—and nearly the points lead. Cooper recovered to collect 1-8 scores and hold onto third overall. His points lead now sits at eight over Jett Lawrence.

Cooper talked to the media after the event.

Justin, you’ve been saying over and over you don’t want to just be the consistent podium guy. You want to get moto wins, and a 1-1 would be great. How much was that final crash there in moto two just a racing thing that happened, or how much was you were pushing hard to try to get the 1-1?
Justin Cooper: For sure, I was definitely trying to get the 1-1. Jeremy [Martin] had a little bit more pace than me and I was kind of just trying to hold him off and he was able to get under me halfway through that second moto. We were just putting a charge back in to just try and make it interesting for the end. I was catching him a little bit here and there, and I felt like I got pretty close with three laps to go. Was just trying to make a little bit of a charge. I crashed going up the uphill. I hit some pothole in the rollers and I never saw it really coming. It’s a bummer. I would have never saw it coming, so it's a weird way to crash. It was definitely tough trying to get back up. The bike was destroyed. My bike was facing up the hill and all sorts of bad stuff. It is what it is. Good first moto, and just good day overall. I had a really good day, I feel. My riding was awesome, so a lot of positives to take from it. obviously, a little bit salty and disappointed that that happened late in the moto.

That first moto, do you feel like that might be your best outdoor moto you’ve ever ridden? Is it on that kind of level?
The first moto, yeah. Definitely. I had a lot of company, obviously. I had J-Mart and RJ [Hampshire] behind me. They were really bringing the heat. It was tough. Those guys definitely didn’t leave me alone, so I had to step it up towards the end. I think I ran my fastest time with a lap to go. So, it was an all-out sprint the whole moto and it was good. Definitely one of my better motos. It was good to hold off those charges that were constantly getting thrown at me.

Moto two, any regrets about pushing that hard, considering your position? Tell us about that.
We had a good battle going. Definitely was trying to not give it up easy. I stuck in there. I was kind of learning from his lines. I knew he had a little bit more pace than me in the beginning of the moto. Before the finish, he drifted out and I had to yield. That’s just how it goes in that section. I stuck behind him and I did my best to try and follow him, keep pace with him. Toward the end there, I felt like I caught him a little bit, but it would have been really hard to make a pass, for sure. I was definitely trying my butt off. Always make it interesting, that’s all there is. I was on the ground. My bike was pretty bad after that. It’s unfortunate, but it’s part of racing. So, good day overall for me. I felt really good in both motos.

At Millville it seemed like you were pretty disappointed with your riding. Today, it seems like even though you didn’t get the win, you were pretty happy with your riding. So, is that the case? Did you actually feel like you rode to what you expect today? If so, what was different today that you felt kind of clicked for you?
For sure. It was a lot better today, compared to Millville. I just really didn’t feel like myself, I felt like I had a really good flow, and I could turn it up when I needed to. Everyone is pretty similar in speed here at this track and it’s pretty fast, so it’s definitely… The start is very important today, and we got those. I feel like my race was pretty good. Just felt like I had more of a flow and basically was just fighting the bike there at Millville. Really can’t do much with that. You’ve got to be one with your bike to be on the top step, and I feel like we had that today. So, it was definitely a good day for us.