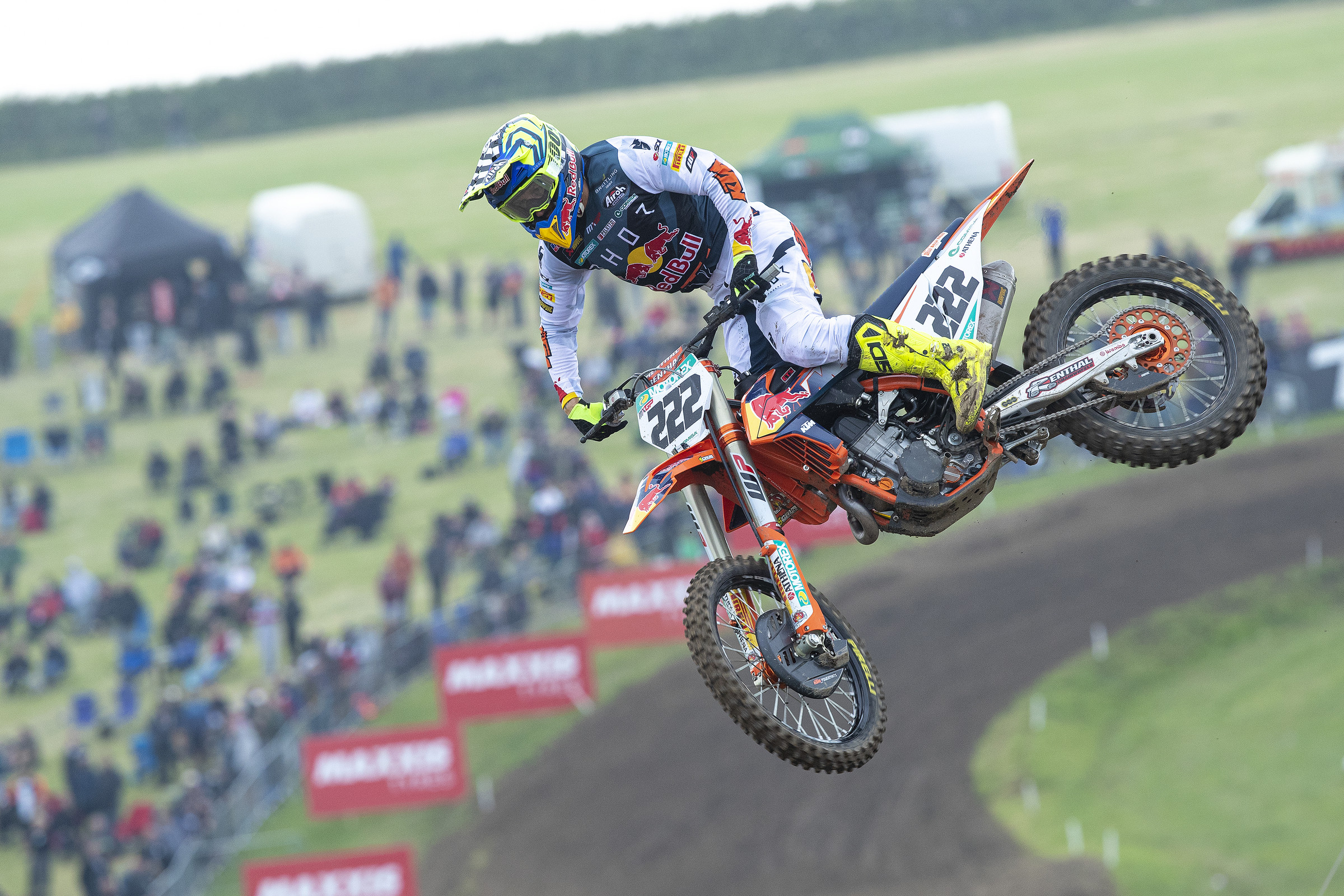 Following Antonio Cairoli’s win over the weekend, we received this interview from MXLarge’s Geoff Meyer, who covers the Grand Prix circuit:

Antonio Cairoli is really something very special. Nine World Motocross Championships and 93 GP victories makes that statement true, but it goes deeper than that. At 35, AC222 continues to surprise.

Comparing him to the GP circuit’s greatest of all time, Stefan Everts, isn’t something you take lightly, but their stats are very, very similar. There is really not a lot between them when it comes to World titles and GP wins or even MXoN success, and although Everts leads in all these stats, the continued surprise after surprise of Cairoli is racing in, what is in my opinion (if you look at the stats), the toughest era in Grand Prix motocross.

Well, yesterday, the Sicilian legend wrote another chapter in the book of his legacy. A 1-3 performance might not be his greatest GP win, but to continue winning at an advanced age marks it as special, plus Cairoli’s press unit says this marks 18 seasons in which he has won a GP. Plus, he was quick at the season opener in Russia, also, which shows early signs that a tenth world title is in play.

We caught up with the Grand Prix winner and had a nice chat about the present the past and the future.

Tony, you continue to surprise us, we don’t want to write you off as an old man, but with the current crop of young riders coming through, the names like [Tim] Gajser, [Jeffrey] Herlings, [Jorge] Prado, we thought you might struggle to win another GP, let alone another World title, then you lead the GP of Russia and then win here in England.
Antonio Cairoli: Russia I might not win, but second place was possible, and I was riding good on a track I don’t usually ride well on, and here at Matterley Basin again, a good result. I expect this and my goal is to always be on the podium, and I know that every year it gets more difficult, because there are so many good young riders coming through, a lot of kids who should be on the podium more than me, but I am really happy with this result.

I mean, does it surprise you or did you expect to be on the podium?
I really don’t know what to expect from myself, because both my team-mate are younger and they need to deliver, because if you watch on the paper, they need to deliver, not me, but when I look on the paper and this does surprise me a lot, also I surprise myself, but I am still enjoying the bike and developing the bike for KTM, I am really enjoying that a lot and we have a very nice bike at the moment.

I know maybe it isn’t an important thing for you, because many times in the past you have talked about not being busy counting world titles or looking at GP win lists, but for people like us, the fans, we love to see you continue to build you legacy, your legend. Even if you don’t ever get another title, moments like today, when you put all these great young talented riders behind you, that really makes it fun for us the fans coming to the races. Do you also like to build that legacy?
Yes, I mean I don’t think about winning a championship, but of course it is my goal, inside of me, but I enjoy a lot my riding and I try and build my race and later in the season we will see. I don’t have any pressure to win the championship, that is for somebody else, somebody else has to have more pressure than me. I have no pressure anymore.

And now six wins at Matterley Basin. You came here as young kid in 2006 and won a moto at the MXoN, and since then you have been the man here. Tell me about your love affair with Matterley Basin?
I mean, I think together with Argentina, it is one of my favorite tracks. All the tracks in England I really enjoy because they prepare it well and the layout is so nice. The English people know how to prepare a track and also to cheer, it is a bit like a home Grand Prix for me with the fans and it is really nice, and I like a lot.

How are you physically, because recently you always seem to have problems with one thing or another.
My knee is at about 70 percent now, last year I was riding with about 30 percent performance in my knee and now I don’t need to drain fluid after every race and now it is more stable, and I can also train during the week. I hope it stays like this and doesn’t get any worse, I guess this is all part of the age. I’m in a better condition than 2019 and 2020. I’m still not 100 percent with the knee because I feel it a little bit sometimes when I put it down too hard in the corner. It’s just a knee that needs some attention, in some left corners I need to let’s say not give 100 percent, so this makes it a little bit difficult because this means I need to push somewhere else to try and gain back this disadvantage. I really feel okay and hopefully we can improve a little bit more and get better fitness at the end of the race.

How about the races today, how did you enjoy those?
I enjoyed race two more than the first one. The passing was nice! In race one I had a good start I was third, then after a few corners I could make my way to first place. Just push as fast as I can and made a gap between me and Jorge [Prado] and made it happen. Of course, after a disappointing weekend last time in Russia I was really not happy about that mistake, we lost a lot of points but today was a very, very good race, I really enjoyed the track. In the second race the last four laps the guys were pushing very hard, Romain [Febvre] and Tim, and I didn’t want to make a mistake, I was getting tired, so I said okay just make this 93rd GP win happen.

You seemed to be getting gobbled up by the riders in that second one and dropping back, and then you suddenly passed a few guys and were charging again. Can you tell me about that?
It was raining a little, I was struggling with some mistakes, I twisted a little my ankle in the first couple of laps when Tim passed me. I was struggling with the slickness of the track, I was just trying to feel the track, to get a good feeling. Then the rain stopped a little and back a bit to normal where I could regroup and push more and more.

Those periods of the race when you are charging and positions are changing, because that second MXGP moto was just crazy, how do you enjoy that?
At the beginning I was surprised, because they got very aggressive from Jeffrey and Tim and then I had to settle down a little and I said to myself this is 2021 and it isn’t 2004 where we used to slow up a little and reset for the last part of the race. With 2021 there is not a reset, you keep charging, but I needed to slow and then attack again, and I caught up and could battle again. I got tired near the end, but still satisfied with that race.

You continue to get up for racing at your age, where do you get it from?
I don’t know, I really enjoy still riding a lot. When you are older and you have a lot of problems also with the health, when you are 20 and you have a broken finger or something you just go, you don’t really care. But when you are 36 and you have some trouble, you really struggle more than normal. Finally, a feel I little better and also training I enjoy a lot, I started running a little bit again after two and a half years and I really feel better for this and also mentally.

In recent years you often start a season strong, but then slowly go down hill. Is that because of age, is that because of your injuries?
I think it is also because of motivation, because it is always the same, same tracks, same people, and for sure last year with COVID-19 with no fans at the track, it gets a bit, I don’t say boring, but it is sometimes hard to get motivated. Also with training, it takes a lot of effort and with my knee problem, I am always at the doctor, draining the knee, putting cortisone shot in the knee, I have to stop riding and so you form changes and because of that I didn’t get the chance to push at the end of the season.

Maggiora next weekend, a beautiful old circuit and it should be a lot of fun for the small group of fans that are allowed to enter the circuit? What do you think of that one?
Maggiora is not really one of my favorite tracks but it’s always nice to race in Italy. It is a nice track and a track of friends of mine built back up. I am happy they make it happen again. Hopefully, I can do them proud, I’m not sure exactly how many will come to the race, but it’s always nice to have people to cheer you like today, it’s what we are racing for. It’s nice to have them cheering for you around the track. I want to be on the podium again and that is all I think about.