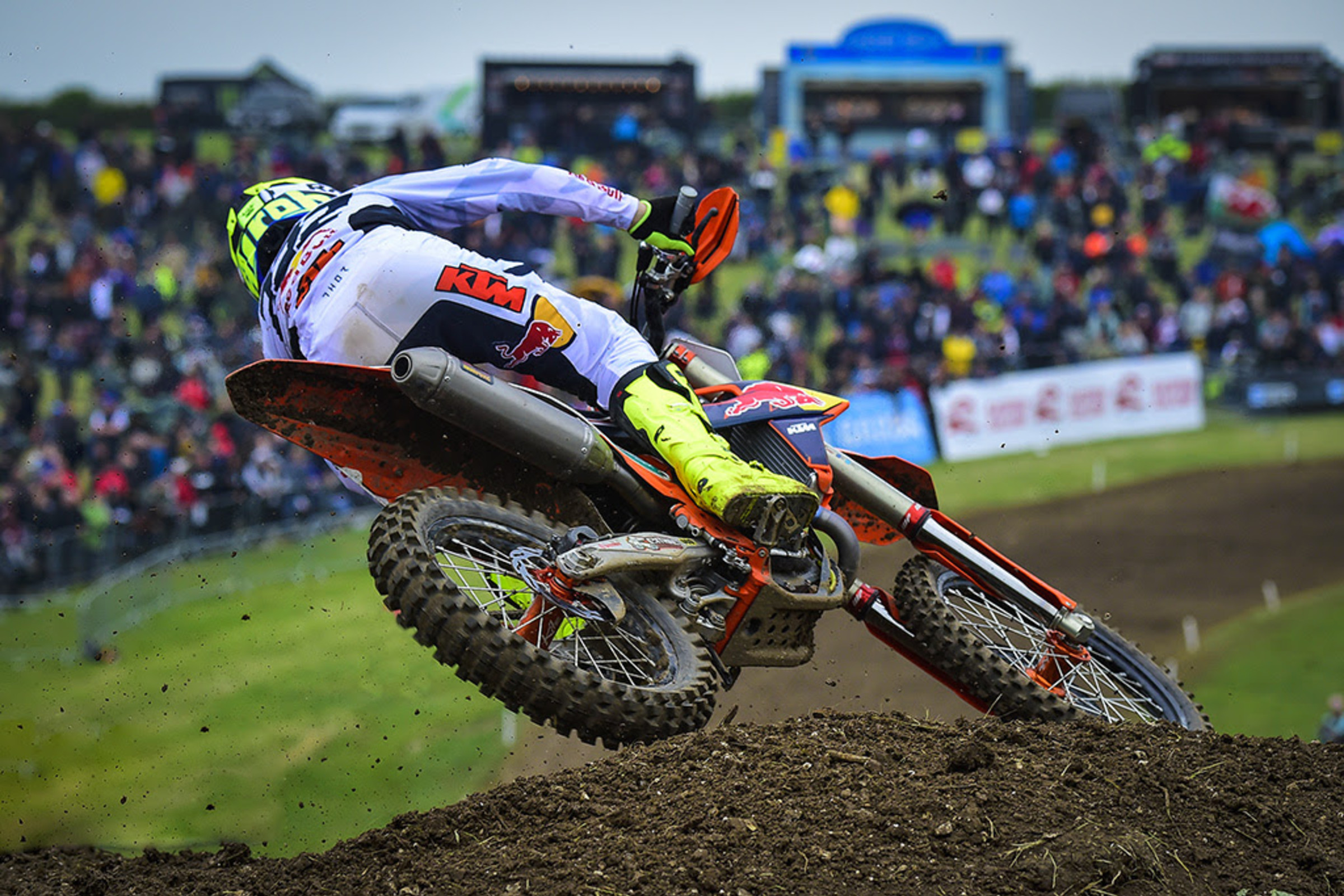 The following is a post-race press release from InFront, producers of the MXGP World Championship:

MATTERLEY BASIN (Great Britain) – The MXGP of Great Britain has delivered once again, with awesome action in both MXGP and MX2 races that saw different winners in each heat for both categories.

While rain was forecasted for the entire day, this did not stop a healthy crowd of British fans make the trip to Matterley Basin to enjoy some of the most exciting racing that we have had this season so far. And what a show the riders put on for the cheering crowd that lit the whole track alive, making for an incredible atmosphere that MXGP missed by the entire paddock in 2020.

In MXGP all eyes were on Antonio Cairoli of Red Bull KTM Factory Racing who bounced back in incredible fashion, following an unlucky GP in Orlyonok, going 1-3 in the races to secure his 8th GP win here in Matterley Basin. Joining him on the podium was Team HRC’s Tim Gajser and Jeffrey Herlings from Red Bull KTM Factory Racing who put together another solid day to get himself on the podium.

In MX2, Maxime Renaux of Monster Energy Yamaha Factory Racing was determined to make up for lost ground in Orlyonok and he did just that with a win and a second to secure his career second overall victory. Mattia Guadagnini of Red Bull KTM Factory Racing placed second overall during what was his second Grand Prix as a factory KTM rider and Honda 114 Motorsports’ Ruben Fernandez continued his podium streak to finish third.

In the opening heat it was Red Bull KTM Factory Racing’s Jorge Prado who grabbed the Fox Holeshot with Monster Energy Yamaha Factory Racing’s Jeremy Seewer and Cairoli closely behind. Though Cairoli wasted no time as he jumped into the lead, while Gajser was fighting further down the order.

On the opening lap it was Cairoli, Prado, Glenn Coldenhoff of Monster Energy Yamaha Factory Racing and Herlings, with Seewer, Gajser and Pauls Jonass from Standing Construct GasGas Factory Racing just behind.

A few laps later, Gajser had managed to get around Seewer and was closing in on the back of Herlings, while Seewer was coming under more pressure from Jonass. And so was his teammate Coldenhoff, who lost two positions in one lap to Herlings and Gajser as the pair went after Cairoli and Prado.

On his return to MXGP racing, Arminas Jasikonis of Rockstar Energy Husqvarna Factory Racing had a tough opening heat, as he eventually pulled into the pits to retire from the race.

With 2 laps to go Cairoli stretched out his lead to 8.731 seconds over Prado, with Herlings, Gajser and Coldenhoff completing the top 5, as Romain Febvre from Monster Energy Kawasaki Racing Team chased down Jonass.

In the end it was Cairoli who secured his first race win of 2021, with Prado 2nd and Herlings 3rd.

In race two it was Febvre who grabbed the second Fox Holeshot, though much like in the opening heat, Cairoli was quick to get out in front.

The opening lap was exciting, with Prado taking the lead from Cairoli and then Febvre doing the same as Gajser got himself up into third.

Seewer then lost a position to Herlings who took 5th from the Swiss. Prado also lost another position, this time to Gajser as he got up into second and then it was game on as the Slovenian rode patiently behind Febvre for most of the race.

Gajser worked away at the gap lap by lap and towards the end of the race he was right on Febvre’s tail. Cairoli kept up with the leaders and at one point it looked like both Gajser and Cairoli were in for the chance of stealing the race win from Febvre.

The last two laps of the heat were intense, as Gajser and Febvre traded positions, with Gajser eventually able to make a pass on the Frenchman stick, on the final lap, and edge out slightly to take the chequered flag.

Cairoli topped the podium, with Gajser second and Herlings third. Febvre ended up fourth overall just 2 points off the podium.

Heading into the third round of the FIM Motocross World Championship, Tim Gajser continues to lead with 93 points, as Jeffrey Herlings sits second in the championship standings just 15 points behind and Romain Febvre is third a further 5 points back.

Antonio Cairoli: “Actually, I enjoyed race two more because it was nice with all the passing, and it was nice to be back battling. In the first race I had a really good start and immediately after a few corners I made my way into first place and then pushed as fast as I can. Of course, I was disappointed with last week. I was really not happy about this mistake; we lost a lot of points but of course today was very good and I really enjoyed the track. I ran short of breath during the second race in the last 4 laps, the guys were pushing hard. It was easy to make a mistake, so I thought let’s bring it home and make this 93rd GP victory happen.”

Tim Gajser: “It was a good Sunday of racing. I enjoyed it a lot. This year they prepared the track a little different, especially in the first race. With Romain and Tony also behind we had a nice race and in the end, I managed to pass Romain on the last lap so it was good.”

“Maggiora is a historical circuit so I’m really looking forward to going there next week, hopefully the weather will be nice, and we will have some nice races”.

Jeffrey Herlings: “It’s our goal this year. We used to go out and try to win but I just want to be on the podium, and it has shown in the past that when you are on the podium almost every weekend you can keep close to the championship. First race was alright, the second race same, nothing impressive, I just don’t have the speed yet, I can do a good lap, but I still struggle with race speed. I’m not far off but I don’t want to throw it away in the beginning. I just want to keep racing and get better and improve week by week”.

In race one, it was Renaux who took the Fox Holeshot as he edged out ahead of Isak Gifting of DIGA PROCROSS GasGas FACTORY RACING and F&H Kawasaki Racing’s Mathys Boisrame. Thibault Benistant of Monster Energy Yamaha Factory Racing was keen to move forward as he got himself into 3rd, with Rockstar Energy Husqvarna Factory Racing’ Jed Beaton getting off to a fantastic start in 4th as he pushed Benistant.

Meanwhile Geerts struggled down the order as he was 12th, though he managed to get back up into 7th by the end of the race.

Benistant remained one of the fastest riders out on track as he was pushing to catch Boisrame and Renaux, while also fending off Beaton. Beaton then crashed out of 4th and eventually came into pitlane before retiring from the heat.

Benistant then crashed also, dropping from 3rd to 5th. At that point Renaux had pretty much controlled the race but things got interesting behind him as Fernandez and Guadagnini were having a strong fight for third.

Guadagnini was applying the pressure as he clocked fast laps, lap after lap, though Fernandez was able to respond and that’s when the pair caught up with Boisrame who was second. Fernandez went after Boisrame and was able to make a pass on the corner before the finish line, for the perfect photo finish.

Renaux was the race winner, with Fernandez and Boisrame 2nd and 3rd.

In race 2, it was Simon Laengenfelder of DIGA PROCROSS GasGas FACTORY RACING who secured the Fox Holeshot. Though he didn’t hold the lead for long as Guadagnini and Rene Hofer from Red Bull KTM Factory Racing were quick to jump into P1 and P2.

Fernandez didn’t have the best start as he began the race in 11th.

Guadagnini then edged out from the rest of the field as Boisrame went after Hofer with the pair having a close battle. Hofer did a great job of fending off the Frenchman, though some laps later Boisrame was able to find a way through into P2, before making a mistake and crashing. He re-joined to eventually finish in 7th.

Jago Geerts of Monster Energy Yamaha Factory Racing was another rider to crash and had to restart from the back.

Race 1 winner, Renaux was keen on getting back in the action and chase a podium spot as he worked his way up the order as he caught up with Roan Van De Moosdijk of F&H Kawasaki Racing and then Hofer.

5.929 seconds separated Renaux from Guadagnini, as Geerts finally found his way up into the points. And as Renaux was looking like he was working away at the gap to the race leader, Guadagnini responded quickly to keep the gap healthy.

In the end it was the #101 of Guadagnini who won his first ever MX2 race, while Renaux was 2nd and Hofer 3rd.

A 1-2 result gave Renaux the overall win, while Guadagnini got his first taste of a World Championship Podium and Fernandez made it two in a row with a 3rd overall.

With Red Bull KTM Factory Racing’s Tom Vialle not lining up for today’s races due to injury sustained during the week, Ruben Fernandez has taken the championship lead, 5 points ahead of Maxime Renaux who is 2nd and Mathys Boisrame who sits 3rd on the same points (74).

Maxime Renaux: “I had really good races, we worked with the team to make progress on the starts, and I actually took the Fox Holeshot in race one so I’m happy about that. I had some consistent races, so I’m very happy about the weekend”.

Mattia Guadagnini: “It’s amazing. I just felt really good and really enjoyed racing here, really like the track and also good feeling on the bike, didn’t’ get the best time this morning but I did a good start and first race. I know the start is important and I took a good start, I was second and passed for the lead in the first lap. I just enjoyed the racing, I made my race, and I got the win, so I’m really happy about that. It was an amazing weekend”.

Ruben Fernandez: “I’m happy. To get the red plate is just awesome. I didn’t expect it so just to have it is unbelievable. The day started well with pole position, but I made my races really difficult with two bad starts. In the first race I was able to get second place after a last corner pass on Mathys Boisrame and also, I had a good battle with Mattia Guadagnini and I felt the pressure from behind so I knew I had to push. In race two, was difficult with the start and then I made a mistake on the first lap. I got sixth in the second race, and I was expecting more. It was a tough day but I am on the podium and with the red plate so just have to keep working”.