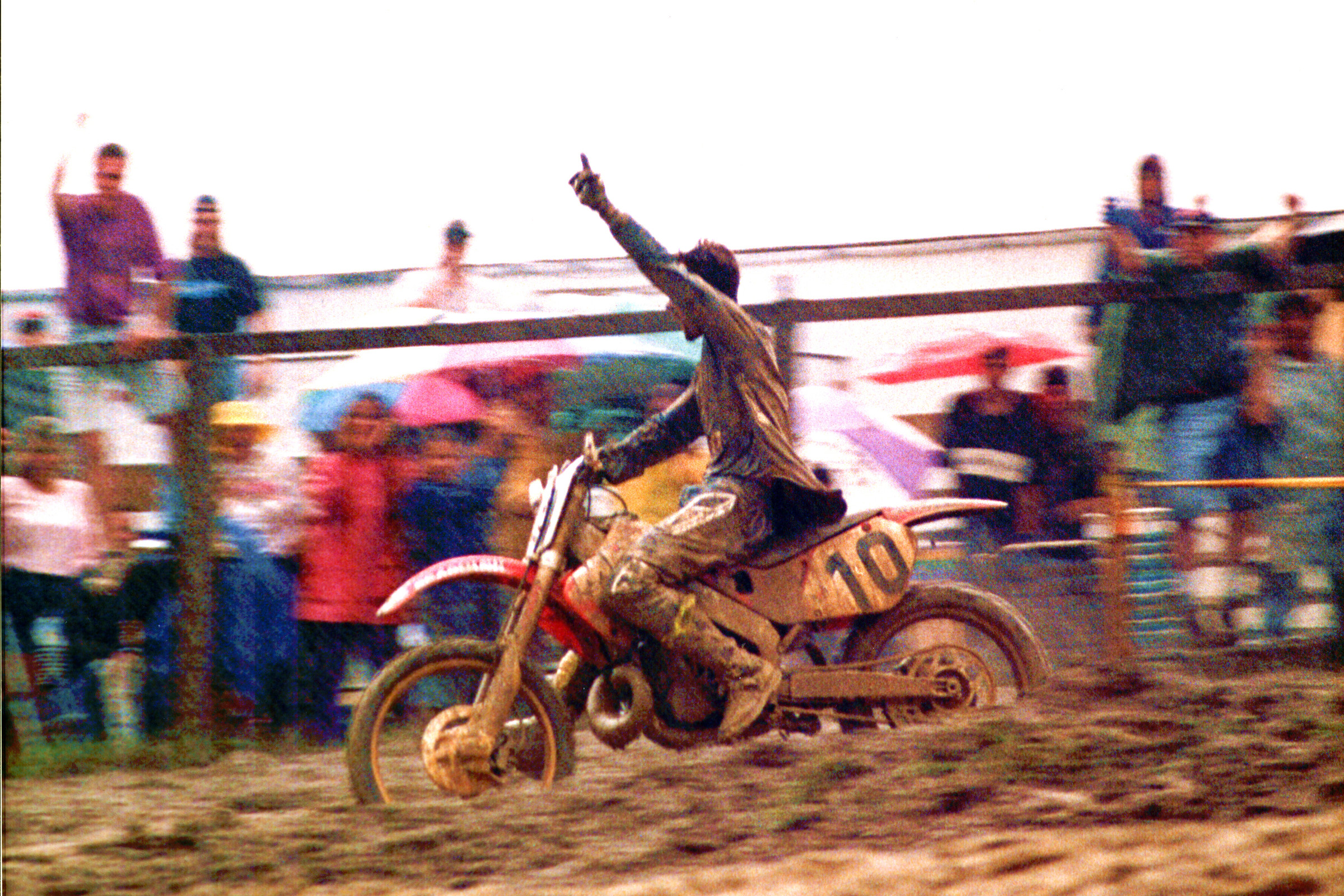 Mud races are funny in this way.  They can be a bummer; they can be dreary. They can ruin a weekend plan. They can also open up the door for a surprise winner, though, and when that happens, suddenly mud races are the best races of all. You can ask anyone who went to the 1997 High Point National about that. They’ll answer with just two words: Damon. Bradshaw.

Not like Bradshaw wins were supposed to be shocking. Dude had as much talent, flash, and speed as anyone. How good was Damon Bradshaw? A modern-day equivalent would have been Jett Lawrence battling Eli Tomac for 450 wins…last year. When Jett was 16. Yes, Bradshaw’s first professional supercross main event came in the premier class at San Diego in 1989, and he battled then-supercross-dominator Rick Johnson for the lead before finishing third. At 16.  The next year he won the Anaheim opener. Two years later and Damon, at 19, was arguably the best supercross rider in the world, on the verge of the 250 Supercross Championship before he fell apart under pressure at the last race. He was never the same, the mega-pressure at a young age—and to end Honda’s long run of dominance and bring Yamaha back to prominence—crushing him at the same time that Jeremy McGrath was readying his assault on the record books.

It was so bad that Bradshaw went from would-be supercross champion to retired by the end of his fifth pro season. But even when he was struggling, Bradshaw was always good at High Point Raceway. In 1993, in the midst of the burn out that led to him to quit, he still won the High Point race. There was always something about that track, and especially those fans, that worked for Bradshaw. He was a North Carolina native, but High Point, some six hours away in Pennsylvania, seemed like a home track.

“Everyone always said it was my home track, meaning that I raced there all the time, but I didn’t ride there anymore than anybody else,” he says. “We’d race amateur day during that national. That was it because that was the only time we could ride there. We would go there and ride the day before the national as a kid.”

Instead, Bradshaw just points to the terrain—and how rough, gnarly, and natural High Point was in those days, as something that worked for him.

Well, it was extra gnarly in ’97, and that was due to something natural: Mother Nature. Rain drenched the place all weekend, so the first motos were muddy and sticky. It started out innocently enough, as Ryan Hughes won the first moto on his factory Kawasaki, with noted New England mud master John Dowd second on his Yamaha. Bradshaw, at this point pretty much on a privateer effort with the Manchester Honda/AXO team built around him, quietly took third.

Even watching the video back now, you can see giant piles of mud pushed off to the side of the track to try to salvage the day. They tried, but by moto two the skies opened, and hellacious rain came down. It was going to be all-time bad.

By then, Scott Sheak was already celebrating his career-first 125 national win. Sheak was on the rise, picked up by the mighty Team Honda for 1997 after some solid seasons with Suzuki support. This was an era where Honda would just pluck a rider like Sheak out of the ranks, give him a mega-fast CR125, and watch him win. What the world didn’t know at the time was things were changing in a hurry. Honda had lost Jeremy McGrath that year, its defending 125 National Champion Steve Lamson would go out with injury, and the new aluminum framed CR250 was not well-received. Meanwhile, Ricky Carmichael was just beginning his assault on the sport, and his boss, Mitch Payton, was readying the doors of the team semi for a whole bunch more #1 plates via KX125s. Sheak got in on the very tail end of the Team Honda glory days. He went 1-1 in the High Point mud, but his engine blew at the next race at Budds Creek, while battling Carmichael. He would never win another national, but he did finish the season third in points behind legends Carmichael and Kevin Windham. Sheak passed away recently, and now his ’97 win will grow even stronger in High Point lore.

As the 250s rolled out for the final moto of the day, rivers were forming around the track. It was gonna be a bad one. Larry Ward grabbed the lead on his Honda of Troy CR250 and checked out. The lanky rider who grew up in the Pacific Northwest was good in the mud. Hughes was second and in control of the overall, defending 250 National Champion Jeff Emig was third. But as the rain got worse Bradshaw got better. He blasted past Emig and then Hughes. The High Point faithful started doing the math. If Bradshaw could catch Larry Ward, he would win the overall with a 3-1 and take his first race win since…High Point in ’93.

“Absolutely and always that [the crowd] was a big driving factor for me,” Bradshaw explains on this week’s episode of the Leatt Re-RaceablesPodcast. “Even when we would go to a supercross in California, I wouldn’t have those fans on my side, so I would say, ‘Okay, what can I do, what can I say to recover those fans and get them?’ Mt. Morris wasn’t a race where I had to work very hard to get those fans on my side. And that was a day when you really did have to dig deep, there was so much mud, and I didn’t have my goggles on. It was super gnarly.”

Bradshaw steadily tracked Ward down and made a pass by bonsaiing up a hill, the same place where he got Emig and Hughes. But this time his bike started sliding, and Bradshaw nearly got stuck. Ward slithered back ahead, and Bradshaw went to work to give it another shot.

“Without goggles, whenever I was trying to make passes, I was basically doing it with my eyes closed,” Bradshaw says.

Time was running out. As the white flag waved, Bradshaw pinned it through the near lake that had formed behind the High Point starting gate. His eyes were closed but he was wide-open, and he passed Ward for the lead. The High Point hills erupted. Bradshaw was going to win. Bradshaw was going to win! Somehow, he even managed a no-hander celebration over the finish line jump (an area of the track which became known as Bradshaw Boulevard). Then the fans took over. Bradshaw did a victory lap, his helmet and somewhere along the way his jersey was torn off. Then he was mobbed by the fans when he got back to the finish line.

“To do the parade lap at the end of the race and celebrate with the fans, that’s irreplaceable,” he says.

The High Point race served as Bradshaw’s last race win in professional AMA Supercross or Motocross. It didn’t serve as a launch point of renewed confidence. In fact, Bradshaw and his upstart team couldn’t make the budget work, and he didn’t race in 1998. High Point ’97, then, gets locked in time.

“That particular race has the only good Jeremy McGrath story that I have,” Bradshaw says with a laugh. “I’ve brought it up to him many times. When I was coming around to lap him and he was trying to pick up his bike, and it was a longer straight away, so I got a pretty good view of him slipping in the mud and then trying to pick it up again. I was thinking, ‘This just adds to the day, that I’m lapping Jeremy!’ That’s my only good Damon Bradshaw and Jeremy McGrath story. The rest are just him kicking plenty of ass.”

As for the fans, Bradshaw remembers the High Point scene was always crazy. High Point on its old Memorial Day Weekend was something akin to what RedBud is on July 4 now. For the better of the series’ travel pattern, the race has moved a few weekends later, to Father’s Day Weekend. It’s a good time, but the mega-rowdy days have calmed. There was always the thought that the late May date gathered up the final bits of the West Virginia University year, and students came for one last, let’s say, good time in the hills. Between that atmosphere and the die-hard eastern motocross fans waiting for the series to roll their direction, High Point was wild in those days.

Yup, a little dirt, and some mud, is good for someone.