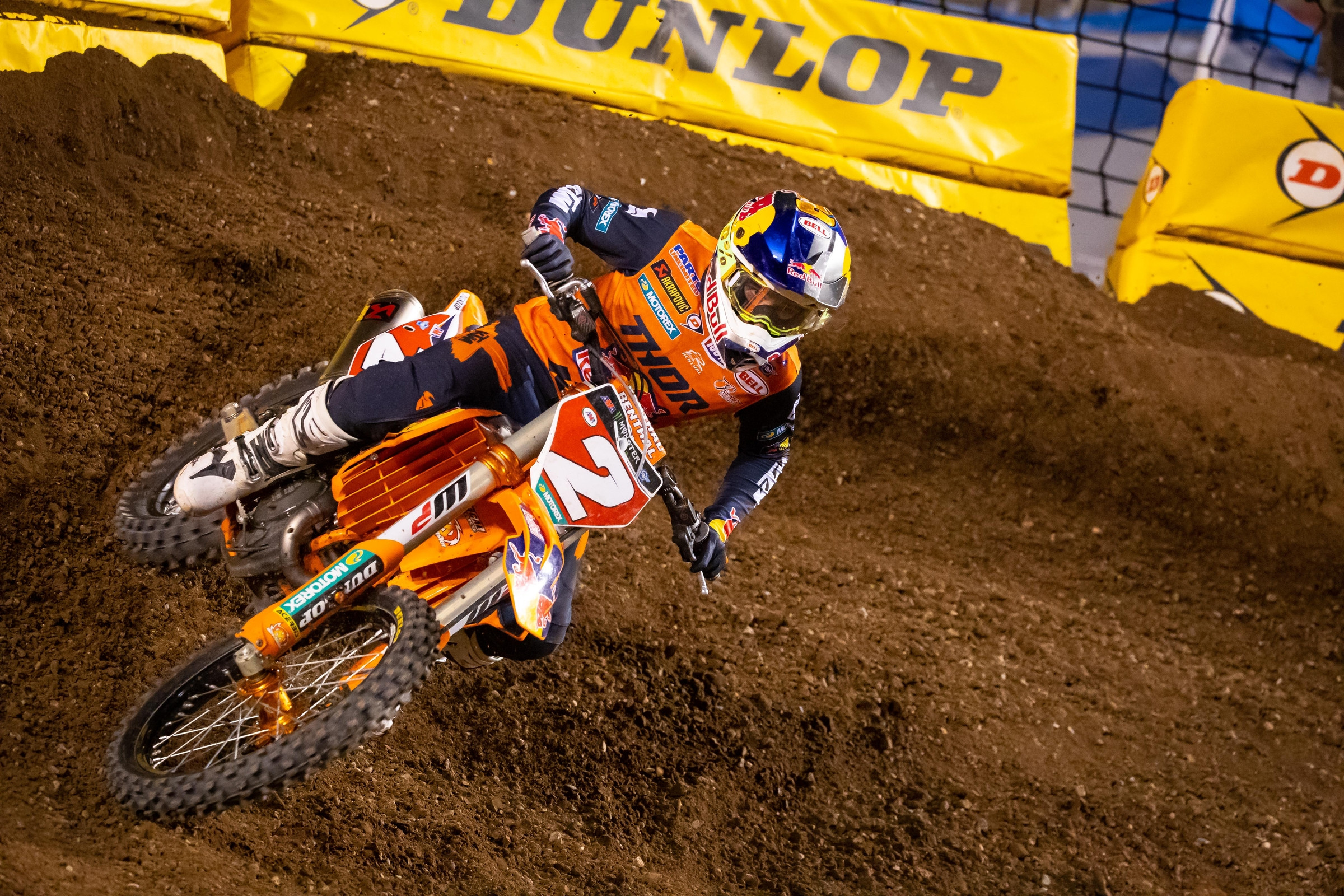 What’s the difference between one title and two? Quite a bit. This sport is often easily defined by eras, and it takes multiple cuts by the next generation to end one and begin another. Cooper Webb is carrying the axe and making his mark. He has two Monster Energy AMA Supercross crowns in the last three seasons, plus a valiant defense attempt in between. Webb has entered his prime, while the miles roll up on the odometer of the previous champs. Simply, he’s now “the guy” in this field.

A first title wouldn’t validate this. We’ve seen it before. Ryan Dungey and Ryan Villopoto won the supercross titles in 2010 and 2011, respectively, but at that time previous-gen stalwarts James Stewart and Chad Reed were still around. Reed and Stew were such giants, so established, so big, that it seemed crazy to think that The Ryans, who weren’t as heralded, as intimidating, or as accomplished, could take them. We had spent nearly ten years watching Chad v. James race for wins. One bad season wasn’t enough to flip that paradigm.

In reality, the flip had already taken place. Not only did The Ryans win in 2010 and 2011 but they kept winning. Especially Villopoto, who took every title he competed for, and then Dungey scooped up the rest. The Ryans combined for nine-straight 450 titles (!), a run only broken by Ken Roczen in 2014, when he upended Dungey for the 450 motocross title. Villopoto was pretty much done by then, but Dungey even struck back to sweep 450 indoors and out in 2015. So that’s 11 of 12 450 titles for The Ryans from 2010-2015. Only about halfway through that run did everyone officially realize what they were seeing. The Ryans rolled in multiple championships. This wasn’t luck or circumstance. This was just the next generation.

Roczen and Tomac could have and should have been the next two, and they kind of were, as they both collected plenty of race wins and titles during their prime. The 450 motocross title went to them five times in six seasons. They didn’t quite vanquish the field like Villopoto and Dungey, but no doubt they were the biggest names on the gate—the likes of Marvin Musquin, Justin Barcia, Jason Anderson, or Blake Baggett, to name a few—could have their day, but Tomac/Roczen cut through that noise. They logged stunning rides that cemented the unstoppable force of “they don’t always win, but on their day, they can’t be beaten.” Moreover, their dominance appeared a foregone conclusion. Roczen was on the world radar at an extremely young age, as was Tomac. When they were winning, everything seemed as scripted. When they were not, everyone wondered why.

So, these guys gathered the most attention when they were winning, but also when they were losing. Same with Reed and Stewart, really. Books could be written on Tomac’s struggle to seal the 450 supercross title, and Roczen’s injuries and comebacks were a constant topic. Heck, even the talk this season centered as much on Roczen failing as Webb succeeding—with Tomac in the conversation as well. We’ve spent a decade analyzing, bench racing, and discussing Tomac and Roczen. Those habits don’t die easily.

(As it turns out, we never had these discussions about The Ryans, because both chose to retire before they lost their grasp. It was coming and they both knew it.)

It’s key to understand this dynamic, and really focus in on how The Ryans passed Reed v. Stew, and how Tomac/Roczen became the next thing. It’s simply the time and inevitability of sports. When you see the timeline there, you begin to realize how this looks. When Dungey won in 2010, it signaled the beginning. When Webb won in 2019, it happened again. It just took another title to really cement it.

Cooper Webb has won 19 supercross races over the last three seasons. That’s more than anyone else. Roczen and Tomac have been in the 450 class since 2014, and eight seasons at the highest level is an extremely long window when you’re matched against younger, fearless, unscarred competitors. We saw it on the front end. From 2014-2017, Roczen and Tomac were making inroads on The Ryans. They could beat them. They were young, fast, and fearless. Remember Tomac at the start of the 2015 Lucas Oil AMA Pro Motocross Championship? Roczen at Anaheim in 2017? They had that edge. Young. Fast. Fearless. Dungey would still consistent, but he couldn’t match that.

It’s not like it’s over for Tomac or Roczen. We’ve yet to see what Webb can really do outdoors on a 450, his 2019 season was meh and he missed pretty much everything last year. Don’t expect a supercross championship hangover this time, though, because title two probably didn’t rock his world emotionally like title one. But Tomac and Roczen are such naturals outdoors that it would be silly to count them out, plus there are so many others, starting with defending 450 Motocross Champion Zach Osborne. These have more great days left, but it’s also inevitable that a large part of this field is closer to the end than the beginning. The longer they can stick around and still enjoy racing, the better it is for them, the fans and the sport. Losing RV and Dunge so suddenly wasn’t good for anyone. Hopefully Tomac and Roczen remain in the game for a bit, but eventually, they will have squeezed all the juice from this fruit.

“I’m only 25, so I feel like I have plenty of good years left,” said Webb on Saturday night. “It’s a dream come true. I never expected to be in this situation, especially as an amateur or as a kid. To be at the high of the sport and the top of the leaderboard is unbelievable. It’s something that I cherish, and I’ll do my best to represent our sport in the best way possible. That feeling of winning is just addicting. That’s what we strive for and that’s what I chase. Hopefully, we can keep at it.”

With these two supercross titles, Webb has proven he can go toe-to-toe with the best and come out on top. More competition will come for him. It comes for anyone holding the crown. Will his next challenge come from someone who is already there, or someone new? Someone else that is young, fresh, and fearless?