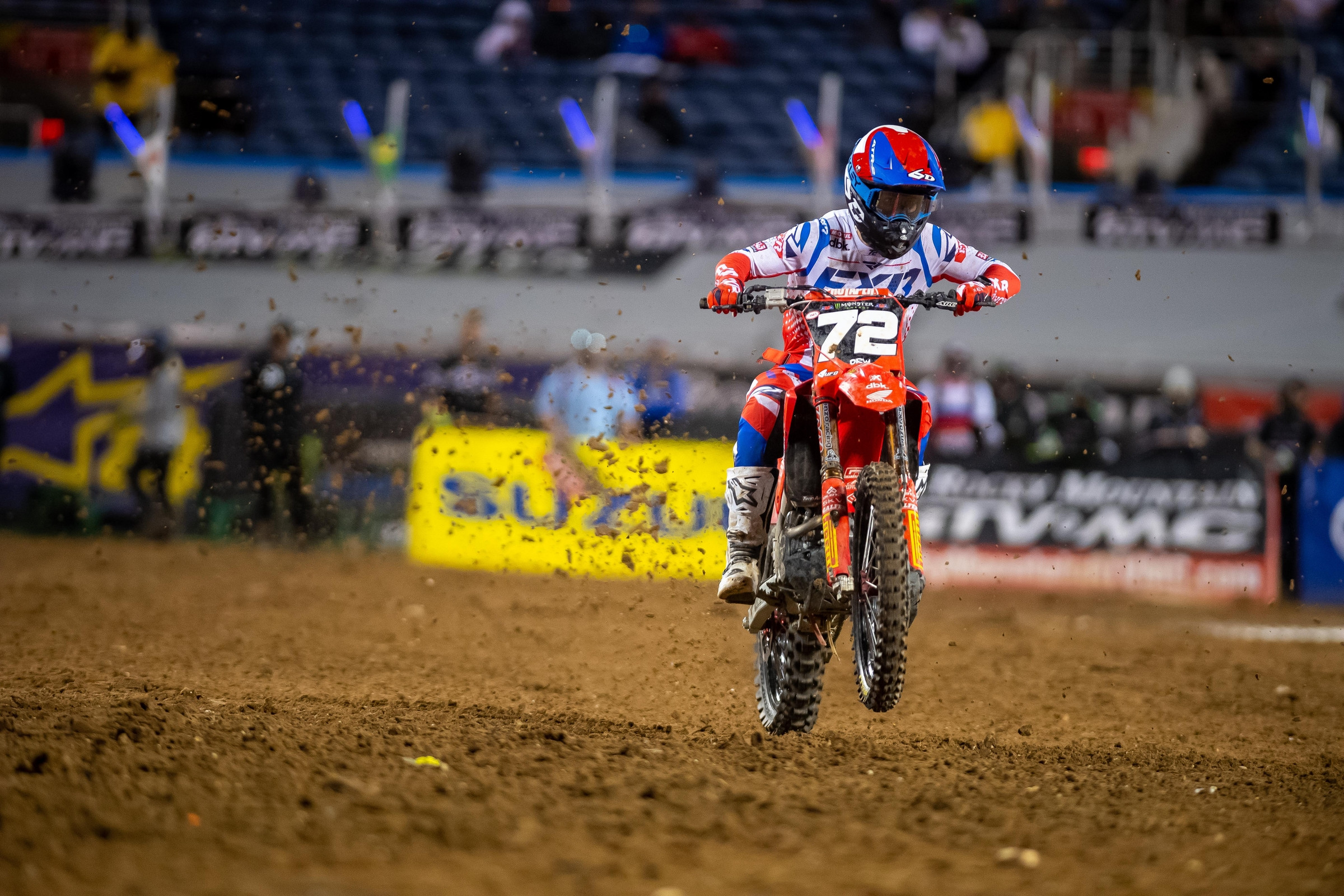 The accolades belong to the champions, Cooper Webb, Justin Cooper, and Colt Nichols. They made the biggest strides, with Cooper and Nichols finally nailing down elusive championships, and Webb not only getting his 450SX title back, but doing it in even more impressive fashion than 2019.

But all racers will tell you results are only somewhat in their control. There are many variables in racing and only three riders can end supercross holding #1 plates. All one can really do is just hope to get better each year. Who really stepped up their game and got better for 2021? I rank a few here, in my opinion. Feel free to argue. Improvement can’t be measured only on points, wins or podiums, and the goals are different for every rider. Some riders are merely on the standard growth curve in their career, but others improved at a rate well beyond that. Wins aren’t always possible, but better always is.

12. Malcolm Stewart: He wasn’t as improved as much as it might look, because while Malcolm was rock-solid consistent this year, he was also rock-solid consistent last year. He scored 252 points in 2020 and 248 this year. That’s the kind of stat that would make SmarTop/Bullfrog Spas/MotoConcepts Honda Team Manager Tony Alessi smile, and also the kind of stat only Tony Alessi would know. There is one thing that makes it seem like Malcolm was better this year: he finally got that elusive 450SX podium. If I don’t put him on this list, it just won’t seem right.

11. Jason Anderson: Anderson had a bit of a late-season surge with blazing fast qualifying times and some heat race wins. It helped re-establish the front-line speed he had a few years ago when he won this championship. It didn’t really equate to much when you check the final main event results or even the points, but there were few nights where people were buzzing “Tonight is Anderson’s night.” He returned to relevancy. That’s a step forward.

10. Justin Barcia: Barcia was better this year on the GasGas, but it wasn’t the “Webb bump” that Cooper received after leaving Yamaha for 2019. Barcia was fourth in points in both 2020 and 2021 and logged one race win each time, at the opener. He did score more points than last year, (he was actually behind his 2020 total halfway through this season, but his Salt Lake City 7 last year went terribly, and he was stronger to the end this time). As cool as it is, Barcia does not want to be defined by his round-one party trick, he would of course like to win multiple races like the Roczen/Webb/Tomac group. Judged against that standard, 2021 wasn’t a revelation, but it’s a big win because of what Barcia did for the brand. He was the perfect guy to launch this new, “fun” GasGas image, with the wild style of Troy Lee Designs behind it as well. With Barcia, GasGas gets a weekly contender, a popular name and a personality that’s on point for the image they want to create. Barcia is probably loved and respected by the fans now more than ever. That’s a win well beyond merely winning the opener.

9.Kyle Chisholm: Yeah, Chiz is gonna Chiz, he always does, but he seemed even, ahem, Chizzier this year. He was laughing in the face of DNQs, toying with LCQs and making the mains with ease. Then he put together a remarkable run of 15ths that was completely on brand for a consistency legend. Then Kyle crashed in the whoops in Atlanta and had to miss a few races. He couldn’t Chiz! Thankfully for the world, the galaxy, and society, he returned for the final race. He made the main. He finished 15th.

8. Jalek Swoll: Swoll’s rookie supercross campaign was rough, and you know what that means: if a rider doesn’t absolutely kill it in year two, he’s searching for work in the privateer ranks. So, there was pressure on Swoll to deliver, and there’s no doubt he was better. Great? Not quite there yet, but simply following this improvement rate for another year will put him right in the hunt.

7. Max Anstie: Who knows? Maybe Max would have been good last year if he had actually had a chance, but he had an Achilles injury and missed all of supercross. But look, he had not raced supercross in ages (since 2013) and never in the 450SX class. There were worries. Well? It went really well! Surely the goal for Max was to just make mains and get experience, and he did exactly that. He started the season late due to another injury, but once he showed up in Orlando, he made every main, stayed out of drama, and ended the year with career best finishes of 13-12. Steady, solid improvements without the highlight reel crashes. Exactly what you want from someone in Max’s position.

6. Christian Craig: Poor Craig didn’t get to fight for the title, as a leg injury suffered last week in Salt Lake City ended his chance. Still, with multiple wins and some time with the red plate, it was his best 250SX season yet. The low note at the end only helps make the point: Christian has been hurt before, but this was the first time he got hurt while battling for a championship.

5. Cameron McAdoo: McAdoo has been on a steady ride up the ranks throughout his pro career, but this year McAdoo vaulted (literally) into a household name. He started the season much more calculated, smooth and in control, and with that he found himself deep in the 250SX West title hunt. He also got his first win, another big step forward. Then came Atlanta and the craziness which overshadowed most of his season, for better or for worse. Bottom line is that Cam was a title contender and a race winner, which is better than before.

4. Aaron Plessinger: Aaron did what he needed to do this season. After two tough 450 campaigns dotted by injuries, his “this is the next guy” star from 2017 had faded. Aaron told us he had an option for a fourth year with Yamaha, and he hoped to get it. Seriously, going into the season it seemed like Plessinger would be lucky if he got to keep his ride! However, Star team owner Bobby Regan said you would see a whole new Aaron Plessinger this year once his team took over Yamaha’s 450 factory effort. Well, Plessinger was much better. He scored a whopping 57 more points than last year, vaulting him from 11th in last year’s standing to fifth, he had a podium and a bunch of heat race wins, and he led enough laps at Atlanta to make it seem like a race win was coming. At this stage of Plessinger’s career, the hard results don’t matter, it’s the potential, and he showed more than enough of that to re-establish his future. That’s a heck of an improvement.

3. Cade Clason: Last year the privateer Clason didn’t make a single main. This year, back with the same PR-MX squad, he made 10 mains! Eventually the mains became nearly a constant, and Clason was working on the next step of improving his finishing position in the big race, instead of just getting into it. His best was a trio of 17ths. He was much, much better than 2020.

2. Hunter Lawrence: This is barely even fair, because we had almost zero data on Hunter in supercross from previous seasons. He showed up, finally, at the end of last season for Salt Lake City and it was not great, as he went 13-7-DNQ. Still, hard to judge too much with a limited sample size. He looked great this year, and not just from a results standpoint. Besides a race win and second in 250SX West points, he looked smooth and in control. Hunter had always said that his run of injuries were just unfortunate breaks from mild crashes, not the result of huge wad ups. Now that we’ve seen him ride supercross in the flesh, that makes sense, because sketch moments were rare this season (he did get rescued by a Steve Matthes Net once, though). With his supercross skills are established, Hunter’s career looks totally different.

1. Coty Schock: A year ago people were watching Schock attempt to get through the whoops in Salt Lake City practice. His attempts were serious, but it was bordering on comedy to watch. He couldn’t do it! He went 20-7 in the results….in the first two 250 LCQs! Schock then made it to the main at SLC 3 and SLC 6, taking 19th and 21st. One year later and he was an entirely different rider, taking ninth in 250SX West points. That doesn’t even tell the story, though (his season best was a seventh). Schock was faster than his results show, as he was involved in several first-turn crashes and other racing incidents that weren’t his fault. Schock really helped legitimize the FXR/Chaparral Honda team in its second year, as his rapid improvement (he credits a lot of this to his mechanic, former pro Tony Archer) makes the team look like a solid developmental path. It also eases some of the sting of a rough rookie supercross season for teammate Carson Mumford. Schock as the most improved supercross rider of 2021? It’s, yes, shocking!