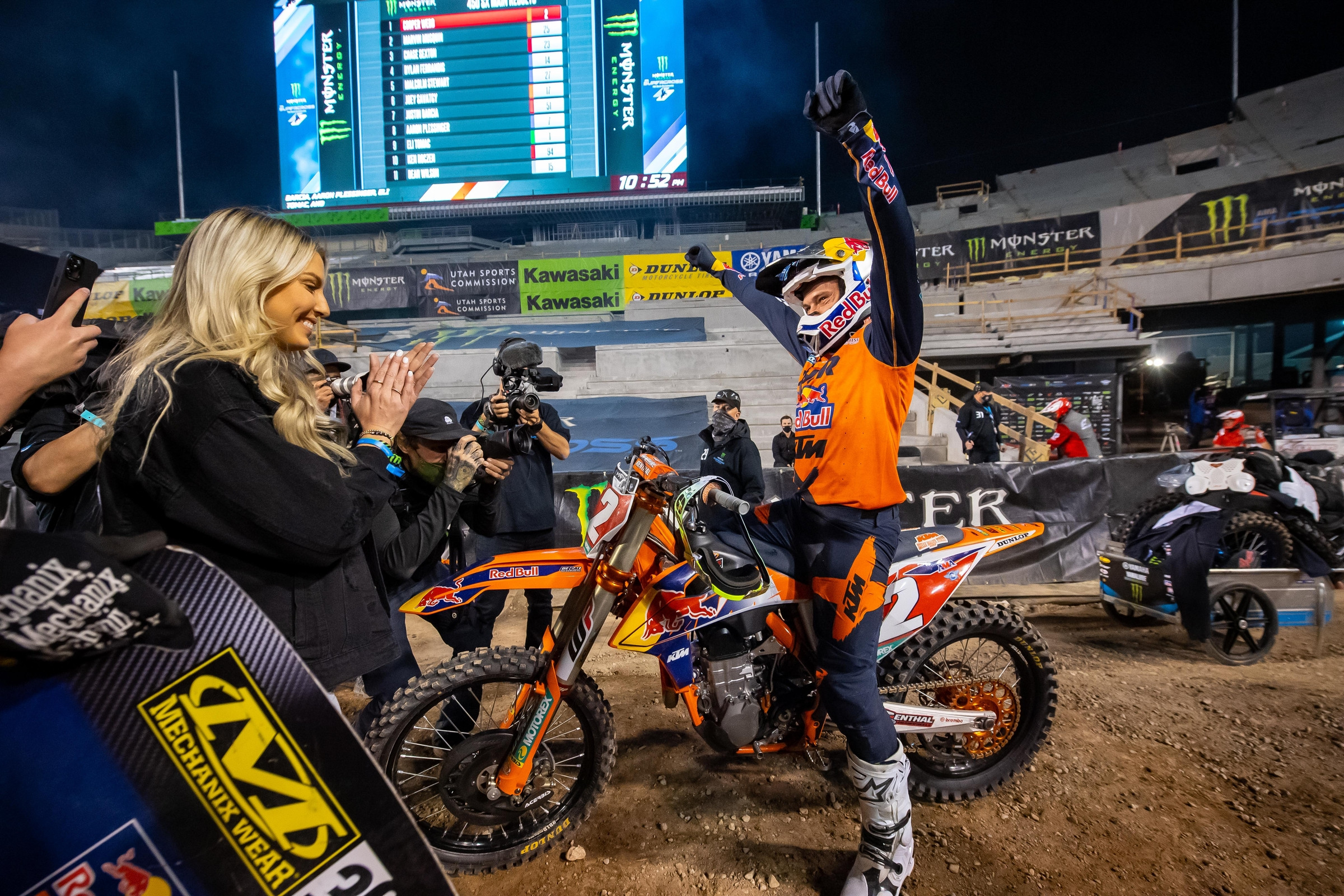 With a big points lead heading into the final race of the 2021 Monster Energy AMA Supercross Championship, a second supercross championship seemed like a foregone conclusion for Red Bull KTM’s Cooper Webb. The main event turned more dramatic than expected, though, as Ken Roczen made some mild attempts to block Webb and try to steal points, and then Webb kicked into his usual late-race charge and went for a race win he didn’t have to get. But he got it, this time chasing down Chase Sexton to get the lead and his eighth win of the season, more than enough to collect his second supercross title.

He spoke with the media after the race.

Racer X: Cooper, way to stamp it. Get the win at the final race on the night you’re going for a championship. You didn’t have to do that. What internally drove you to go out and try to get that win tonight?
Cooper Webb: I think it was just mainly mindset. All week I think it’s so easy to think about the “what ifs” and the “don’t do this or don’t do that, don’t ride or do this,” but I just treated it like a normal week. I was in a great situation with a nice points gap coming in. I think it was 19th or better if Kenny won. Unless something catastrophic happened, I felt like I had a really good position. Honestly just wanted to win the season on a high. In 2019 I won my championship and the nerves were high and all day I was just stressed out. I feel like I just learned from it and wanted to have fun throughout the day and enjoy it. It’s not every day that you get to win a 450 championship, so just enjoying the little things and not changing course throughout the day. Honestly, I was in a really good position. I thought me and Kenny were going to go at it for the majority of the main event. Long story short, I was able to get around him and put my head down and just click my laps. I think that’s what helped me. It’s easy to think about the “what ifs” and the bad, but I think when you can press forward and go out and just race to your ability and go for wins, which I wanted to do, it’s definitely a hell of a way to end it.

Now that you’ve won this title twice, have you started to think about that you’re taking the mantel as the guy in the sport and what it means to be the endorser of the sport, on and off the track with fans, with media, with kids, mainstream, all that? The spotlight is really going to be on you now with two championships. Have you thought about that, your role sort of expanding as the guy in supercross?
It’s something you think about. It’s an honor. To win two, as of right now, I think I’m the only guy to do that in the 450 supercross class that’s currently racing. So it’s huge. I’m only 25, so I feel like I have plenty of good years left. It’s a dream come true. I never expected to be in this situation, especially as an amateur or as a kid. To be at the high of the sport and the top of the leaderboard is unbelievable. It’s something that I cherish and I’ll do my best to represent our sport in the best way possible. That feeling of winning is just addicting. That’s what we strive for and that’s what I chase. Hopefully we can keep at it.

Was there a point in the season that you knew this is likely going to happen? I’m definitely the dominant guy? Was it your pass on Ken at Houston 3? Was it the tactics at Daytona where you had the race craft there? Was it your sweep at Orlando? What was the moment where you knew, this is my title to win?
I think Orlando was the beginning of it but I think Daytona stamped it, seeing the emotions that went into that. I kind of knew right then and there, I got this guy [Roczen] beat. It’s crazy. Obviously anything can happen, but the mental side is the biggest part of our sport, in my opinion. When I saw the reactions, I just kind of in my head knew I’m right where I need to be. I was gaining stride. I was gaining confidence. I knew that it would be a fight and it's going to be tough, but I just felt the momentum shift and I knew I’ve had this feeling before, so let’s go for it again.

I’m just curious. It seems like you got a little chippy during the main. It got a little aggressive for a minute in there. How far would you let that go, and how far do you take it?
I honestly wasn’t expecting it. I get it. You’ve got to try what you can, but I was a little annoyed, to be fair. I get it. It’s racing. If you go for the front wheel and make it work and break some spokes or whatever the logic was, I get it. But at the same time, it was quite a bit of a big points gap. For me it was the ultimate statement to be able to take my time, get around him, kind of give him a bump back. I don’t even know what he finished, if he got a top ten or not. It is what it is. It’s racing. For me I always want to be out front and moving forward and never looking back.

You didn’t back into it.
There’s two ways to go about it. You can be conservative and ride within your reason, but for me I just looked at it as an opportunity to try to get another win. I feel really good here in Utah. I’ve always raced well here. I like the tighter tracks. I just felt like I could win. So I just kind of put myself in that situation. I knew late in the race at altitude guys were going to get tired. I knew Chase was in a position where he was leading his first main event and nerves come into play. I know how it kind of goes. Just kind of pressed forward and was able to get a late pass there at the end and secure the win. It’s awesome for me. To get eight wins in the season is incredible, and the bonus money doesn’t hurt either!

You talk about how important the mental game is. It seemed like as the season wore on, you really wore on Kenny mentally. Was there a point where you felt, I own this guy mentally at this point?
No. You don’t own anyone. It’s just racing. I think like you said, I feel like I’m pretty good at making things happen and being able to pull things through in tough situations. Kenny is probably the most talented and best guy out there on certain days. You can never take anything for granted. He put up a really good fight this year, and there for a while I didn’t know if we would be able to catch him. I don't think you’d ever think that [you own someone] by any means, but you kind of know what you have in your back pocket.

Your first championship took place in 2019 before COVID-19. What’s the atmosphere like in the stadium winning the second time? Less people. Is the atmosphere still just as good for winning a championship?
Yeah, it was. Honestly tonight there was a lot of fans there, so it was super cool. It was sweet. I think for me, I was so nervous in ’19 and this weekend just being so excited and more hyped than anything. The feeling when I crossed the checkered was pretty cool. I got second last year which was a good motivator. So I think it was honestly a higher vibe today.

Bonus check. When that thing hits the bank account, what are you buying?
I’m a tight wad, so I can’t even tell you. I’ll let you know. Maybe a boat.