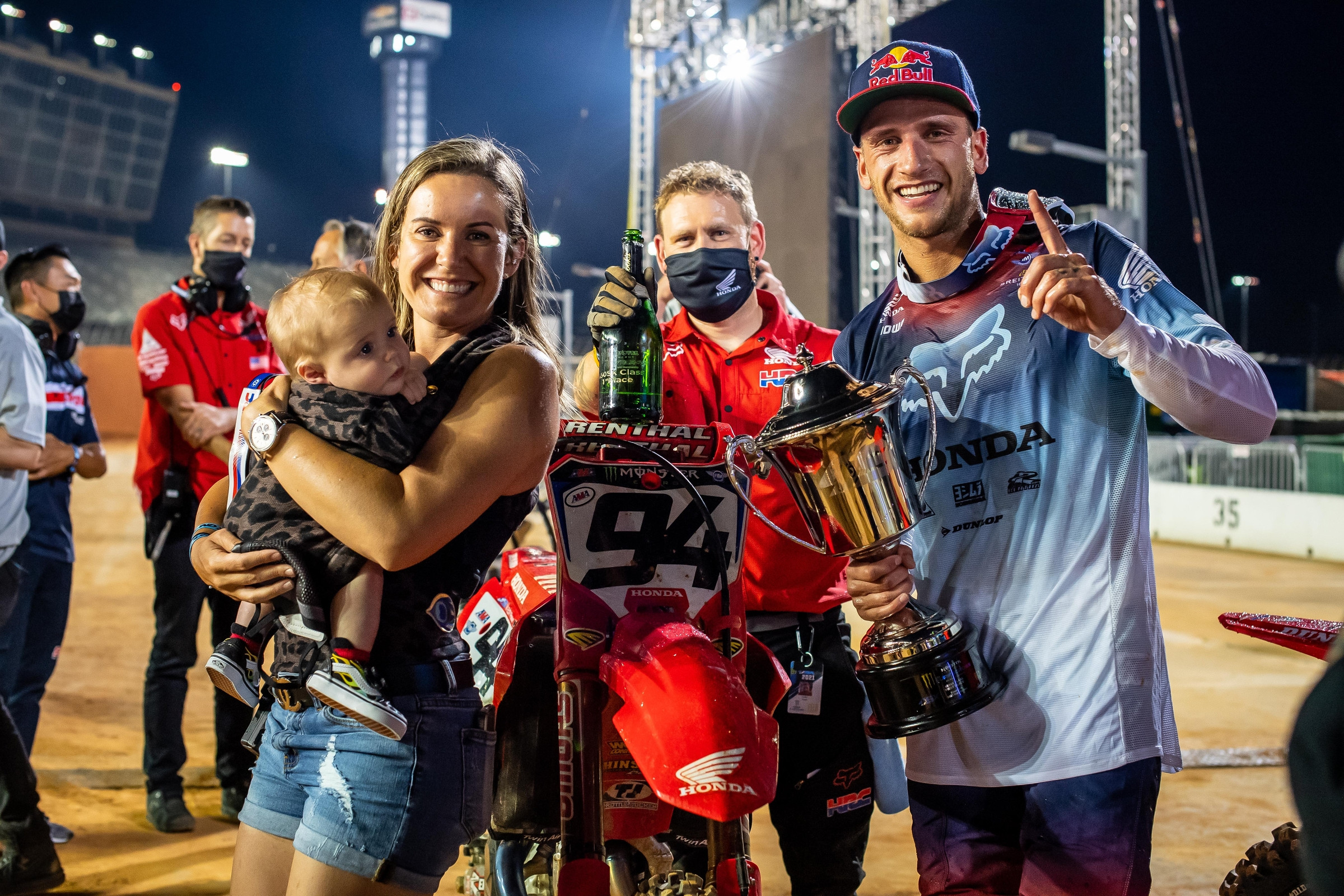 Last summer, Honda HRC’s Ken Roczen decided to sit out the 2020 Lucas Oil AMA Pro Motocross Championship in order to fully recover heading into the 2021 Monster Energy AMA Supercross Championship. Roczen wanted to take the time to mentally and physically prepare as he aimed for another run at his first premier class supercross championship. Plus, his wife Courtney was expecting the birth of the couple’s first child. Kenny continued to rebuild himself during his time off as the family (of three if you include Rio Roczen, their French bulldog) welcomed their baby boy Griffin Savage Roczen to the world in September 2020.

Entering the 2021 season, Roczen got an updated paint scheme for the new year as the phrase “Griffin’s Daddy” was added to the back of his Fox helmet.

After Roczen claimed his first win of the season, the family of three posed for a photo together. Roczen won again only a few days later and the trio snapped more pictures. Following that second win, Roczen was asked if he can compared himself to himself in 2016 and 2017 (pre-arm injury).

“It’s really difficult to compare. Even though I was great in ’16 and ’17, I’m mentally in a completely different spot,” Roczen said after the Indianapolis 2 Supercross. “Back then, I feel like I rode the highs a lot more than I do now. I’m just quite a bit older and a lot has happened in-between there and then. So, it’s really hard for me to compare that kind of stuff. ...I don't know how to explain it. I’m just more mature mentally, when it comes to the racing side of things and my program is way different. I’m just really comfortable and open-minded. I’m listening to everything, and also the critique. I’m picking everything apart when I watch the race. I would just say completely different timeframes, is basically it.”

Roczen can attribute some of that changed mindset to his son, as he explained in a video Honda posted on Tuesday.

“It's just made everything so much better because I enjoy things a lot more, I feel like I have matured a lot,” Roczen said on Griffin’s birth. “And it takes me away from the daily grind a little bit, which is exactly what I needed.”

“It’s amazing. It’s exactly what I needed, even in between practices,” he continued on having his son at the races. “Whether there’s changing a diaper, or holding him for a little bit, or feeding him, it kind of takes me away from this craziness of lap times and sections, ‘You’re slower there, faster there.’ Sometimes I don’t care about any of that because when your mind is freakin’ clear like that, that’s when you ride the best. It’s been a blast so far.”

Then Roczen won for a third time in the week at Indianapolis and Griffin was treated to a seat on his dad’s race-winning Honda CRF450R.

“I sit him on the bike and even though I’ve said, ‘I don’t know if he’s going to be a motocross racer,’ simply because I want to tap into some different sports,” Roczen said. “But at the same time, how can you not share something that you have done for 98 percent of your life? I’d be lying if I don’t get these happy feelings when I sit him on my bike, and he starts [to put] his hands on the handlebars.”

“We started this together, we’re going to keep growing, our team, our family, and when that day comes, we’re going to say, ‘we finish this together,’” Courtney Roczen said. “Griffin has been there through the wins, through the losses, through the ups and the downs. If anything, how lucky are we that we have the photos and videos to be able to share with him because when the day does come, who knows if Griffin is even going to be able to remember this. So at least we are able to keep him involved to the point where in the future he’ll be able to enjoy it. We’re just creating those memories.”

As the season has progressed and Griffin has continued to grow, Kenny has continued to post photos and videos of baby Griffin to his Instagram, the latest a clip of the two listening to Bob Marley together.

Now, with one round to go in the championship, the German native sits 22 points behind Red Bull KTM’s Cooper Webb. Although Roczen is still mathematically alive to win the title, he will more than likely come up short of the championship. But he has continued to say following the last few rounds that he is giving it his all and he is thankful for his health because of his change in perspective. Fans online have gotten on Roczen for not making aggressive moves on Webb when the opportunity has be there, but Roczen continues to remain content with his season as he is looking big picture.

“I don’t feel like I need to prove myself anymore or anything like that,” Roczen said after the Atlanta 2 Supercross. “I want to be able to enjoy the moment that I’m in. It’s been a long time.”

Then after a costly mistake resulted in a win slipping away from him at the Atlanta 3 Supercross, the #94 said: “I feel like I’ve won enough in my life. I at least feel like I don’t have to prove myself anymore, but at the same time I don’t race just to come in far back.”

He explained his change in perspective more in-depth in Honda’s video.

“I needed a change in my life and in my program, which is what we have done,” he said. “And Griffin has made it so much sweeter. Me caring about something different than just racing has really, I feel like, elevated my game. If anything, he makes it so much sweeter on the weekends just because whether I ride good or not, he doesn’t care: I come back to the same Griffyman than before the race. And it’s just helped my outlook on things. And [I] appreciate family a lot more than what I even did before so if anything, throughout this season, it’s helped me elevate my game. And I wouldn’t change a thing, it’s awesome.”

“It brings me a lot of comfort to know that we’re there when Ken comes off the track, win or lose, it’s like we are still winning because we have us,” said Courtney.

Check out the full video from Honda below: