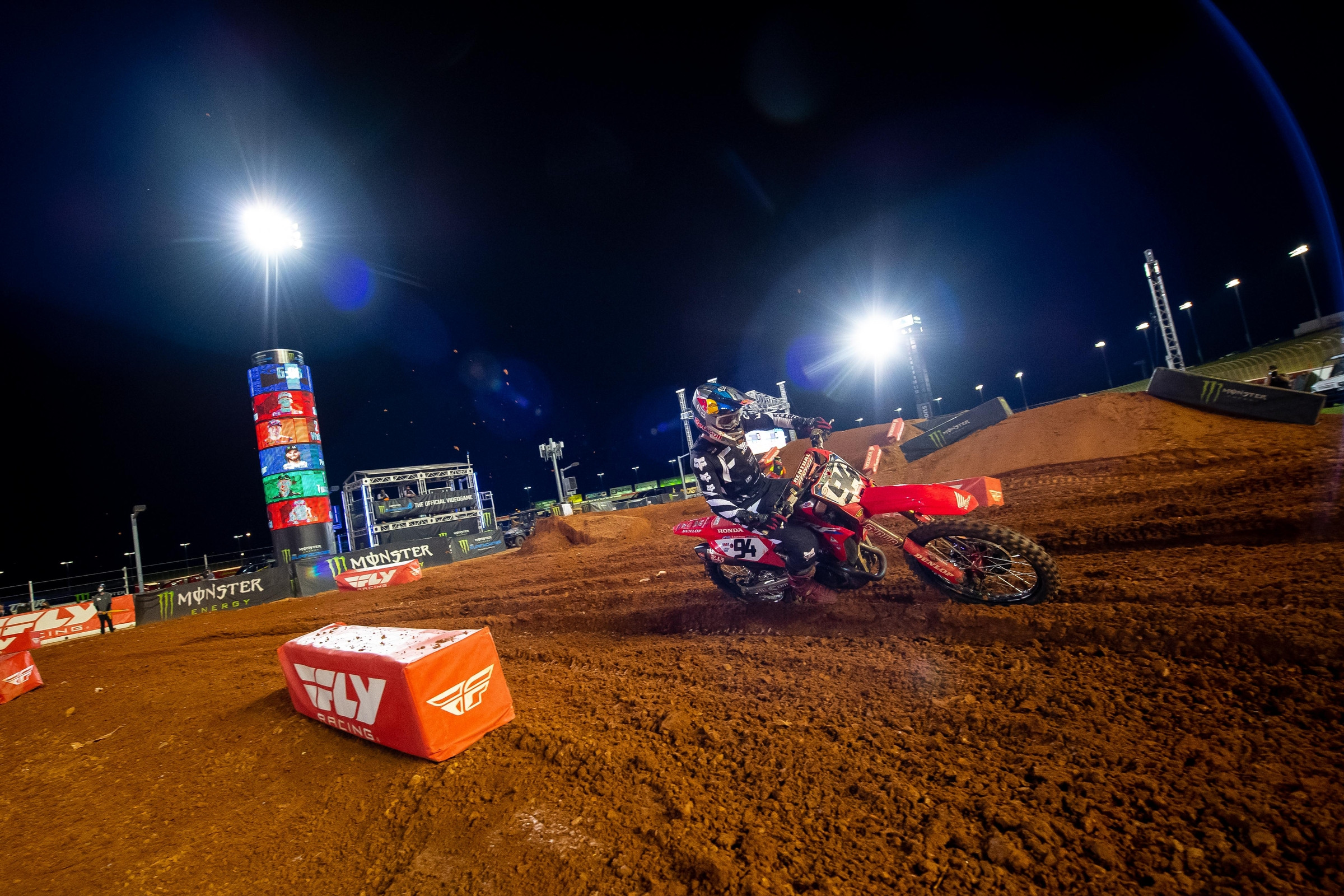 Saturday night in Atlanta Motor Speedway, Cooper Webb ripped victory from Ken Roczen’s hands again. This time Ken made it a little easier by crashing in the whoops while holding a big lead. Webb “smelled blood in the water” and made a late-race charge to steal the win. Roczen’s had far too many of these close losses to Webb, but he’s finding a way to stay positive before the final two races in Salt Lake City.

Racer X: Ken, the kind of crash you had in the whoops is every rider’s big fear. For you, how did it feel physically and then how did you regroup yourself to jump back on the bike so quick and then settle into those laps even though you knew Cooper was right there behind you?
Ken Roczen: It was weird. I hit the whoops really good pretty much almost every single lap. Once I started swapping sideways like that, it started getting so bad in that V right there and I really had nowhere to go, so I went down. Even though it wasn’t a high-speed crash at all, but I got the handlebars so that they were a little bit tweaked. That definitely took me some getting used to. It kind of just took the wind out of my sails a little bit. I had to regroup. After that, I wasn’t even skimming the whoops anymore because they were so gnarly. I didn’t want to move to a different side of them and try to skim them, because I didn’t really know what it was like. So I just stuck to what was safer. Obviously, it was slow as heck. I just tried to regroup. Obviously it’s a huge bummer, especially after having a twelve-second lead. Those mistakes in supercross especially this late in the season. But in the end, I can only do the best that I can and try hard and that’s what I did. Obviously wish I would have won. I feel like I could have taken it easy a little bit and jumped through the whoops for the rest of the main event and still been fine but crashes like that happen. It is what it is.

The whoops tonight were the toughest I think we’ve seen. Do you guys prefer them that way? Is that what you’d like to see moving forward? Does it matter to you as much that these were noticeably more tough.
There’s always a happy medium. I actually thought that in the main event, I liked them better in the main than they were in practice. At the same time, like Cooper said, I think those are probably some of the gnarliest whoops we’ve ever seen, and especially with how many there were. There was just no room for error, as you can see. I feel like it collected a lot of people today. When they built them, it’s all fun and games when you have to hit them once in qualifying practice or whatever, but then you’ve got to hit them for twenty minutes straight. It separates but at the same time they can bite you big, too. I feel like there’s other ways of doing the whoops where they’re a little bit more racey yet difficult. But in the end, everybody has to deal with them.

A lot of emotional ups and downs in the last few weeks, especially since Daytona. You talked about it last week that us and the media, we have all these things we talk about. But this loss had to be pretty heartbreaking, two to go. How do you mentally regroup and get yourself back in the mindset?
I am back in the mindset. I’m just trying. There’s not much else I can do. I love racing. I’m just going to come back to Salt Lake and try again. That’s what I want to do. Honestly, it’s fun being in this championship hunt and not being 50 points down. Obviously we had an opportunity tonight to close it up even a little bit more to make it more interesting, but it’s close enough to where anything can happen. That’s the most fun. It's fun for the team. It’s fun for me. Of course the ultimate goal is getting a championship, but at the same time I can just go out there and try my best, just like tonight. It didn’t work out into our favor, but at the same time I can go to sleep because I rode a solid race. We had a mistake and we did our battles and got a second. We’re healthy, so that’s the most important as well.

When Cooper did catch you and you went into that turn, you went really wide into that turn. Were you still trying to regroup at that point and thought maybe you let him by? You did try to square him back up. You said your bars were bent or something, but was the plan to still try to regroup and then come back after him?
For sure. I went really wide because in that kind of situation, I didn’t know exactly how close he was but I knew that he was close enough to possibly dive bomb to the inside. I was trying to square it up, but honestly the turn was so wide too and he turned down quickly, there was no way. Actually afterwards, I screwed myself going through the whoops. I kind of went in it sideways and got all sorts of out of whack. After that, I just tried to latch on a little bit. I went back to actually jumping through the whoops and that was slow and there was just enough of a gap that I couldn’t really do anything about it. I tried, and I saw him making a mistake too. Ultimately I wish I would have been a little bit closer. I crashed once in the whoops and kind of just picked my battles. I started jumping them and actually the last lap was the worst I jumped them, literally. Wasn’t close enough to make anything happen. But in the end, it was still fun racing. I learned a lot throughout the whole day and even in the race. It felt great to open up a gap. So I’m going to hold onto the positives and take it into next weekend.

Ken, you’ve been a big star from when you were 15 years old. You’ve felt the pressure from you were 15. You did your first GP. You had a press conference before the GP. You’ve been winning from when you were 15. How has that been? You were a superstar in Germany. How has that been mentally for you to cope with that? Has it ever been restrictive or too much pressure? Does all that experience help now in a high-pressure situation now going for a supercross title?
I was lucky enough that even early on whether I was racing the European Championship or whatever it was, I was always kind of around winning, around first position, and that’s the ultimate goal in general. But there was a time in my life where winning again was a goal again from it kind of coming naturally and it happening fairly often, to getting injured and just trying to come back and win again. Now I feel like I’m somewhat more consistently winning again. I wouldn’t really look at it as pressure. I feel like I’ve won enough in my life. I at least feel like I don’t have to prove myself anymore, but at the same time I don’t race just to come in far back. I’m more so just enjoying being in the title hunt again because I don’t have a supercross title yet and I would love to have one. In general, it’s just fun to be in it. It’s pretty much between two guys. It has been now for a few rounds. I’m just enjoying the ride.