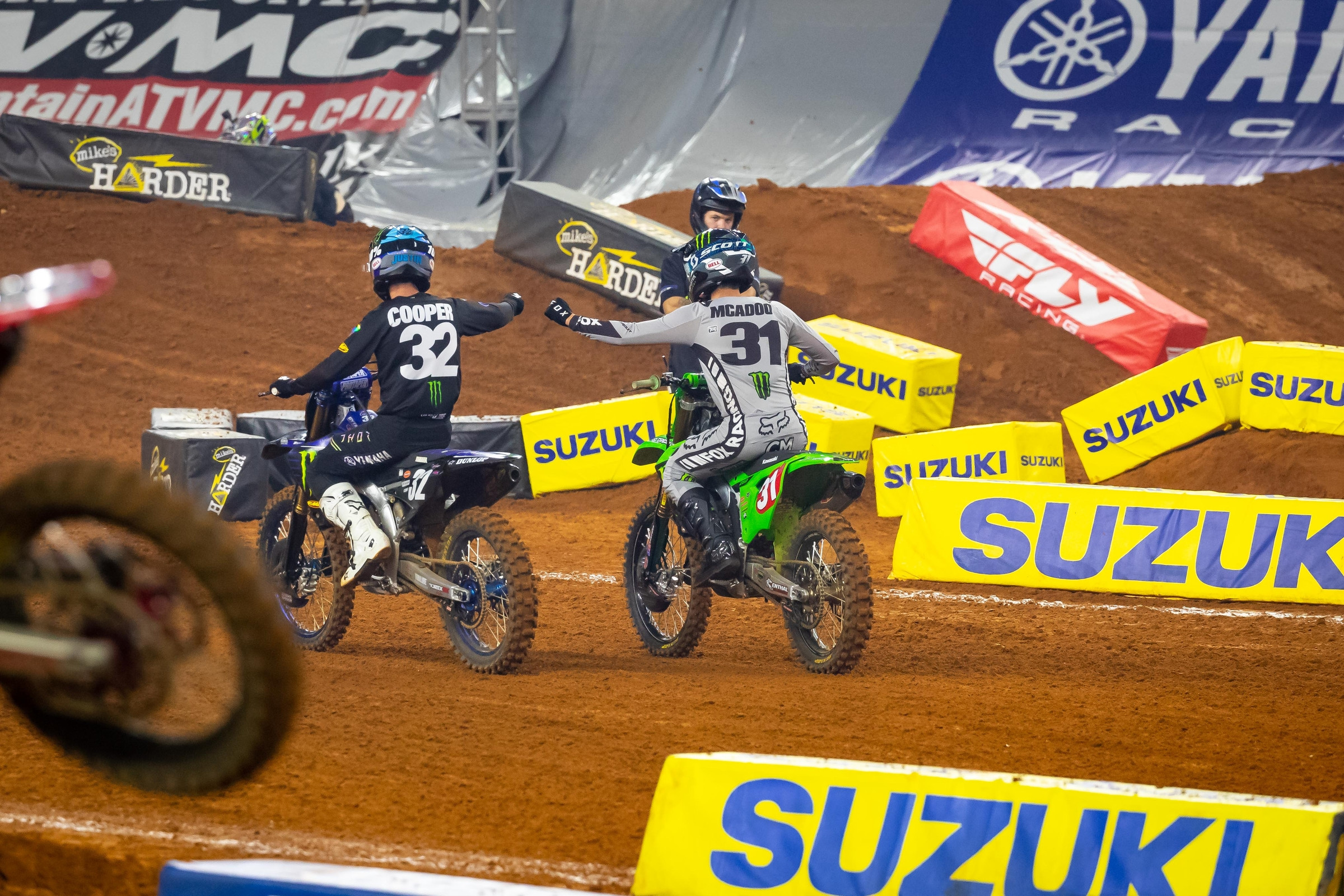 Right now, the title is up for grabs in the 250SX West division. Hunter Lawrence, Cameron McAdoo, and Justin Cooper are about as close as you can get in championship points. Lawrence has 84, Cooper has 82, and McAdoo is jammed in between with 83. If Lawrence grows his gap, he’ll establish himself as the new man to beat for this championship, while McAdoo needs to shake off his crash and penalty from Tuesday and show he’s still in control of this thing. Lastly, Cooper, who hasn’t been on the podium since Orlando 2, has the chance to reset, retake the points lead, and make a break for the title. All three badly need to win on Saturday night. Which one, if any of them, will it be? –Aaron Hansel

It’s hard to believe only two riders have been on the podium more than once this season (McAdoo and Lawrence), but it makes sense when you look at just how many 250SX west riders have been on the box so far. In just four rounds (with four different winners, by the way) we’ve seen the likes of Lawrence, McAdoo, Cooper, Garrett Marchbanks, Jalek Swoll, Seth Hammaker, Kyle Peters, Stilez Robertson, and Pierce Brown on the podium. Sometimes we don’t even see that many riders up there all season! What’s going on in the 250SX West division is incredible, crazy, and extremely entertaining, and there are still multiple guys who could make that list even longer on Saturday. –Hansel

Sometimes all it takes for a rider to start stringing together wins is getting that first one out of the way, and in the 250SX West Class we’ve already had three first-time winners—McAdoo, Hammaker, and Lawrence. So far McAdoo and Hammaker haven’t been able to repeat the feat and Lawrence hasn’t had a chance to try yet, but all three will get a shot at recording win number-two this Saturday night. –Hansel

It’s pretty difficult to find any weaknesses in Cooper Webb’s game right now. He’s been ridiculously consistent, hasn’t made any silly mistakes trying to get greedy with points, and when the wins have come his way, he hasn’t wasted any opportunities. He worked for the last one too, holding off a relentless Eli Tomac for almost the entire race. This championship, for the most part, seemed pretty up in the air just one week ago, but now, it sure seems like Webb’s grip on it is strong, and only getting stronger. Webb now has a chance to complete a clean sweep of all three Arlington races. If Webb wins this championship, will we look back at Arlington as the major turning point of the series? –Hansel

Other than the three races he missed on account of a foot injury, Dean Wilson has been incredibly consistent so far this season. His best finish has been ninth, his worst 12th, with several tenths and 11ths mixed in. That’s not a lot of variation! Of course, you know Wilson would like to improve his average somewhat, and at Arlington 1, where he led a lap in his heat and holeshot the main, it looked like he might be on the verge of recording a season best, which he did with ninth. We’ll see if Wilson is feeling spicy again at Arlington 3. If so, maybe he can start sniffing his way a little closer to the top five. –Hansel

Despite just getting back to speed from an off-season foot injury, Justin Cooper crushed the 250SX West opener. He even saw prime competitors like Jeremy Martin and Jordon Smith crash out of the race. With Cooper expected to just get faster and stronger as he recovered from injury, his title prospects looked simple. Instead, he has opened the door for the slew of new winners mentioned above, mostly because his starts have gone by the wayside. Cooper started up front twice at Orlando 1 (the main was red flagged and restarted) but has had major work to do since. He’d like to replicate his Orlando 1 finish, but can he first replicate that Orlando 1 start? –Jason Weigandt

We know the 450 LCQs are often the best races of the night, but the last two have been better than even the usual, with five riders battling for four spots in Saturday’s last turn, and then Cade Clason and Brandon Hartranft dueling down to the wire on Tuesday (Clason got the nod when Hartranft was penalized for going off the track). The always-hungry pack of privateer animals has only grown stronger with so many 250 East riders, such as the hot-starting Kevin Moranz, getting in the mix. Whatever you’re doing on Saturday, stop doing it and watch the 450 LCQ when the gate drops. –Weigandt

Tuesday’s race might have been the model supercross with Cooper Webb, Eli Tomac, and Ken Roczen starting 1-2-3 and staying there the entire race. These guys were the top three in points last year and again hold those spots this year. There are others than can spoil that podium party, though, including Justin Barcia and Jason Anderson, who have been flying lately. Both put on huge charges from the back on Tuesday, Barcia up to fourth and Anderson to sixth (seventh after a penalty) after crashing in turn one. Not only are these guys fast, but they’re spicy. If they gate better on Saturday don’t be surprised if they run for the podium or the win, just like they did at Arlington 1. –Weigandt

Okay, again he missed the podium but it’s clear the “Daytona Aaron Plessinger” is still with us. Aaron has won back-to-back heat races and threw down epic podium interviews each time, and while he was only fifth and sixth at the two Arlington races, remember that pre-Daytona Plessinger was looking at fifths and sixths as  career bests. So, this is still the best we’ve seen Aaron, which is refreshing. Does anyone not like Aaron Plessinger? We doubt it—so everyone is happy to see him up at the front. ­­–Weigandt

Within these three-races-per-week sets, everyone expected the dirt inside the venue to get drier with each race. However, the Dirt Wurx crew has done a good job watering, and that meant Tuesday’s Arlington dirt actually looked tackier than Saturday’s. Well, that was only the case early, as by the night show riders such as Cooper Webb said the track looked tackier than it actually was. Indeed, the slick stuff before the whoops caught several key riders, like Eli Tomac and Cameron McAdoo, off guard at the worst time. The tricky Texas dirt is probably as big a factor in the track as the actual layout. Will this one be sticky and rutted or dry and slick? –Weigandt