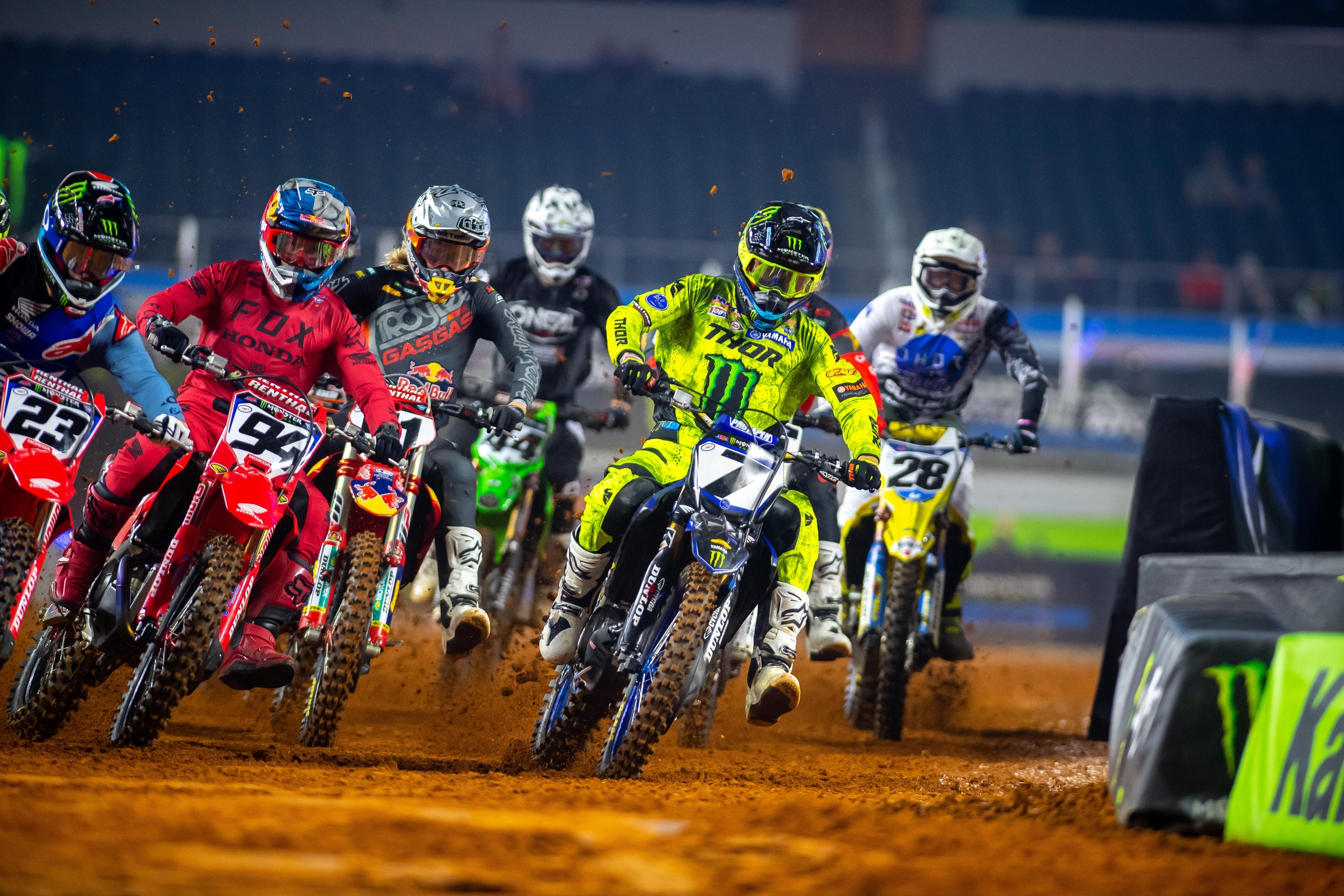 The 11th round of Monster Energy AMA Supercross provided plenty of surprises and interesting storylines. We witnessed yet another first-time winner in the 250SX Class and the top three 450SX championship contenders all started together come the main event. As such, we fired off questions to long-time pro Jason Thomas to pick his brain on everything Arlington 2.

Cooper Webb already had 15 career main event wins and a championship, but is this win—with Eli Tomac and Ken Roczen right behind him off the start—bigger than others?

I personally believe it was a bigger race for Roczen than Webb, but in the opposite sense. For Roczen, he has been on a downtrend for a few consecutive rounds. At the second Orlando, Roczen’s pace was incredible but he was hindered by a stubborn Tomac and was unable to close the gap once he finally got clear. Onto Daytona, his pace was certainly great but he was overmatched by Webb’s second corner sleuth. The first Arlington just a few days ago marked the third round in a row that he missed the podium.

The first Arlington round was a real head scratcher of a ride, too. For the first time, his pace was not eye popping. For the first time, he had a big crash in his heat race. For lack of a better term, he looked rattled. I believed this second Arlington round to be somewhat of a make-or-break race for this 2021 campaign. While it is clearly too early to hand out championships, the mental battle has definitively shifted in Cooper Webb’s direction. The second Arlington round only furthered that notion, with Webb leading wire to wire. Worse, Roczen started third and was simply unable to mount any sort of response to Webb’s poise. We are six weeks away from crowning a champion. If Ken Roczen wants to be that guy, he has to change the direction of the momentum pendulum, and fast.

This track was better than Saturday's track, yes? No?

No, definitely not. Those switchbacks were brutal for passing and the rhythm sections were incredibly easy. The whoops were challenging, which was certainly a plus, but otherwise, I wasn’t a fan. Anytime a track has multiple 90 degree corners as well as slow, tight 180s, everything funnels to the inside line. That leaves a following rider powerless to make a move as the outside line is simply too slow to utilize.

The bowl berms did provide a few passes (Justin Barcia was effective here) but we simply didn’t have enough of them for my taste.

Did you have "Hunter Lawrence will hold the red plates" on your 2021 SX bingo chart?

I have to say I did not. I didn’t expect much from Hunter this year and kudos to him for proving me wrong thus far. After an injury plagued 2020, I was looking for a rebuilding year that ramped into the Lucas Oil AMA Pro Motocross Championship. He has clearly overdelivered already so I guess the sky is the limit from here? I will have to adjust my preconceived notions about Hunter moving forward. This is not the same rider that I watched in those SLC rounds, that I can promise you.

I believe all of them were warranted but I have to admit I was surprised by the severity of McAdoo’s penalty. I considered Anderson’s move to be just as egregious so I didn’t really understand the distinction. McAdoo is mired in the midst of a championship fight so those points are even more valuable. Not to dismiss Anderson’s season, of course, but I would bet Anderson just shrugged his shoulders at the loss of a position. For McAdoo and team, it was a brutal blow and also resulted in the loss of the all-important red plate, too. Tough deal and maybe a tad harsh.

I believe they got Hartranft’s penalty right and for one simple reason. With Cade Clason’s inside move, he forced Hartranft to brake or go off the track. That was a classic block pass and in theory, Hartranft is supposed to check up and give Clason the line he had forced his way into. Instead, he decided to veer off the track, around a jump, and accelerate back into the lead position. Had he gone around the jump and settled in behind Clason, he would have been fine. The fact that he accelerated hard and held the position in the process is what cost him. The question I have is, had he dropped back in behind Clason, could he have made a pass before the checkers?

Are you concerned with Justin Cooper?

I wouldn’t say concerned, per se, but he is not putting in the performances that I expected, either. I really thought he would run away with this thing after J-Mart left the series with injury. He has gotten bad starts and crashed at very inopportune times, leaving the door wide open for McAdoo and H-Law. I still have him as the favorite to win this thing but it’s going to be much more of a dogfight than I had imagined.

Who else logged a good ride besides the race winners?

I like what I am seeing from Chase Sexton here. He is building his form back up and I think we will see a breakout ride soon. Whether or not he can beat Webb is up for debate but I do think we are going to see him grab a holeshot and go full send here soon.

In the 250s, we had a few great performances. Jalek Swoll, Kyle Peters, and Mitchell Harrison all deserved mention. With the chaos for Seth Hammaker, Cooper, and McAdoo, there was a nice opportunity at the front. Great job by those able to step up when the opportunity arose.

The level of anger I had/have towards A-Mart is bordering on a worrisome level (note it became known five minutes after the PulpMX Fantasy lockout that Martin would not be racing the night show). I am going to just shut up to keep myself out of trouble but I was fuming at around 7:05 p.m. Saturday night.

As for A-Ray, picking him is a level of assumed risk that many mortals will never encounter. It’s akin to permanently moving your entire family to Chernobyl. I have no mercy for anyone asking for that sort of risk.