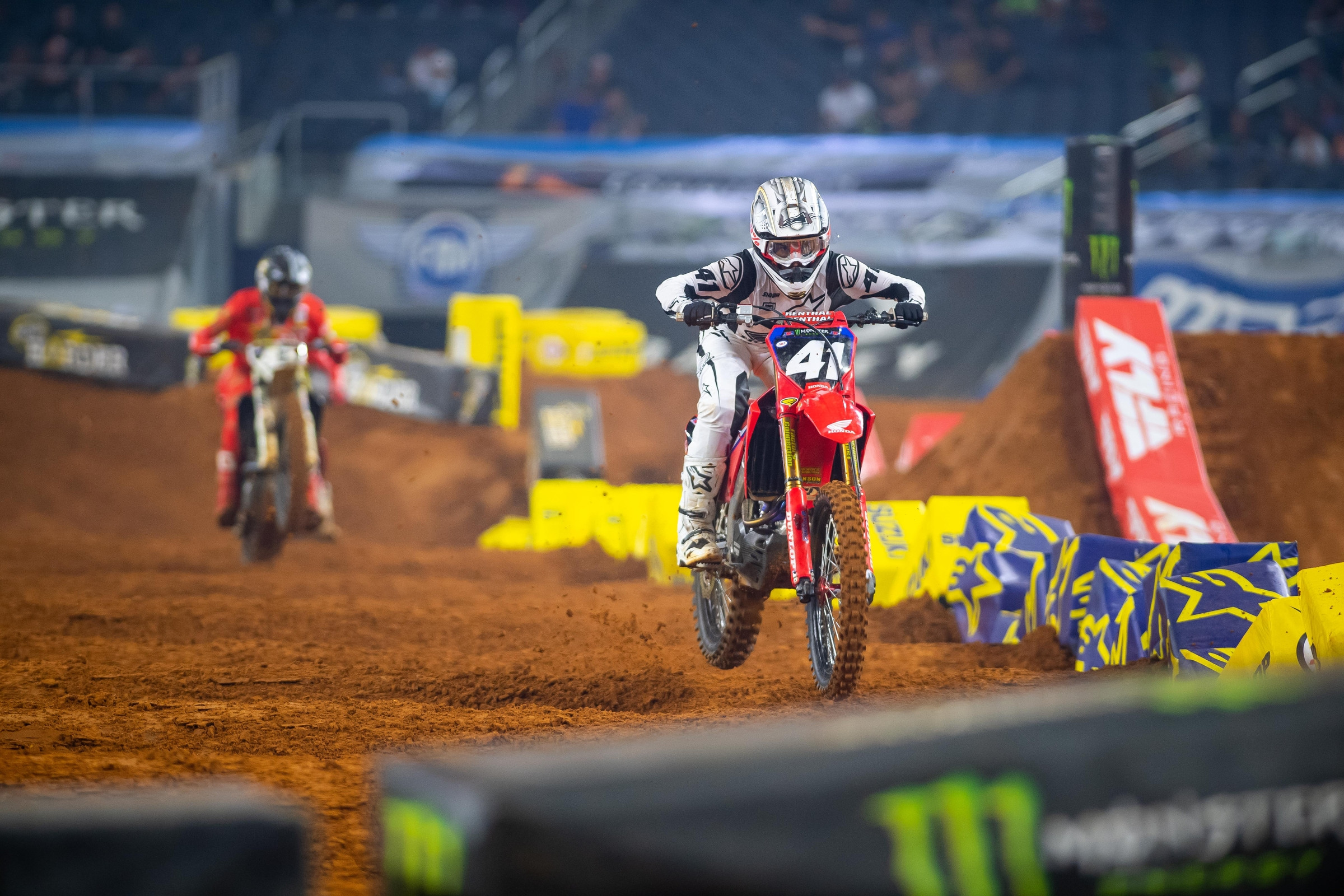 So, the 250SX East Region was pretty wild, as riders grabbed race wins, red plates and podiums that they had not—or had rarely—done before. Ha, but you think that was crazy? On this St. Patrick’s Day, 250SX West is saying, “Hold my green beer.”

Here’s one more for good measure:

No disrespect meant here, but few were putting “Hunter Lawrence will hold the red plates at the halfway mark” in the script. Hunter has been around the pro scene for a while now with big wins at big races, but when it comes to supercross he’s a rookie, basically. Plus, the darned injuries had already piled up, so it would be safe to say goal number one was to just stay safe. Working against Hunter is that he came through the GP route and I’ve heard from multiple sources that Australia’s supercross scene for your riders isn’t even close to what it was in the 1990s, when it churned out the likes of Chad Reed, Michael Byrne, Brett Metcalfe, and a dozen others who were ready made for AMA supercross racing. Well, to be honest, everyone was just guessing on Hunter’s supercross skills, because no one really got to see him race. The real proof is in the watching, and while his brief debut in Salt Lake City, Utah, last year was a washout, he has looked positively un-rookie like in 2021, looking smooth and in control every time his wheels were on the track. There haven’t been sketchy moments, there haven’t been signs of inexperience or un-comfortability.

Hunter has rebuilt his body through lots of testing and careful work with nutrition. He’s more durable now and he’s finally gotten to show his supercross skills in an actual race. Now that you can see he can tackle indoor circuits without a problem, it exposes his huge advantage over the rest of this field: as an out-and-out racer, he actually has a ton of experience racing big races at a high level all over the world. Lawrence has won GPs, Lucas Oil AMA Pro Motocross Championship motos, and has logged scintillating rides at the Monster Energy FIM Motocross of Nations en route to MX2 class wins. His last two races have put his race management skills on display, as he nearly ran Seth Hammaker down last week but took the safe route to his first podium. Last night he waited the pack out and then pounced with a strong two-for-one pass to take the lead.

Hunter is just one example in this 250SX West season. Cameron McAdoo, once a totally unheralded amateur, so relished his chance to race on a factory team as a pro that he probably wanted it too badly and rode too hard. He’s had to work hard to calm all of that down. Yeah, he bobbled on Tuesday and crashed, then cut the track before reentering, resulting in a penalty. That’s an error, but simply watching the man the Lawrence brothers call “Wackers” now shows the obvious progression. He’s much smoother than before. Make that much, much smoother. Now he’s getting to experience red plate pressure, the spotlight, fans, media, Mitch Payton, and more. He’ll be all the better for it.

Lawrence’s breakthrough was a massive feel-good moment, yet nearly matched by the feels for the second and third place riders. Jalek Swoll had a rough rookie campaign last year and was fist-pumping all over as he crossed the line in second. Kyle Peters has spent his career in that proverbial neutral zone, always good, never quite great, which resulted in bouncing around for teams and rides, some with factory equipment, some not. It seems like Peters has finished between fifth and 10th 100 times, which is just enough to want more but not enough to enjoy steady factory paychecks. Peters is giving it one last push, working harder than ever, seeing a mental coach, and piling confidence with a perfect Kicker AMA Arenacross season. He expects better results than before, including podiums, and that’s what he got last night. The last time Peters was on the box, he did it with a torn ACL (in an embarrassing move, he crashed riding through the snow-covered pits heading to the line, resulting in the knee injury. He fought through the pain the next week and made the podium for JGRMX Suzuki). As great as that story was, Peters didn’t look as happy then as he did in Arlington last night. This is a guy who truly understands the great life and opportunity of a professional dirt bike racer, how hard these podiums are to get, and how to really soak them in when they come.

This entire 250 pack, on both coasts, can tell that story. Between race winners like Colt Nichols, Christian Craig, the Lawrence brothers, McAdoo, and Hammaker, there’s been plenty of adversity, underdog status and the general thrill of first wins. It’s amazing to consider Justin Cooper, he of the “lived in Long Island, New York, and did a year of college” story to now be considered one of the established winners of professional racing. He, too, carries that underdog tale.

They all do. It’s been that kind of season.