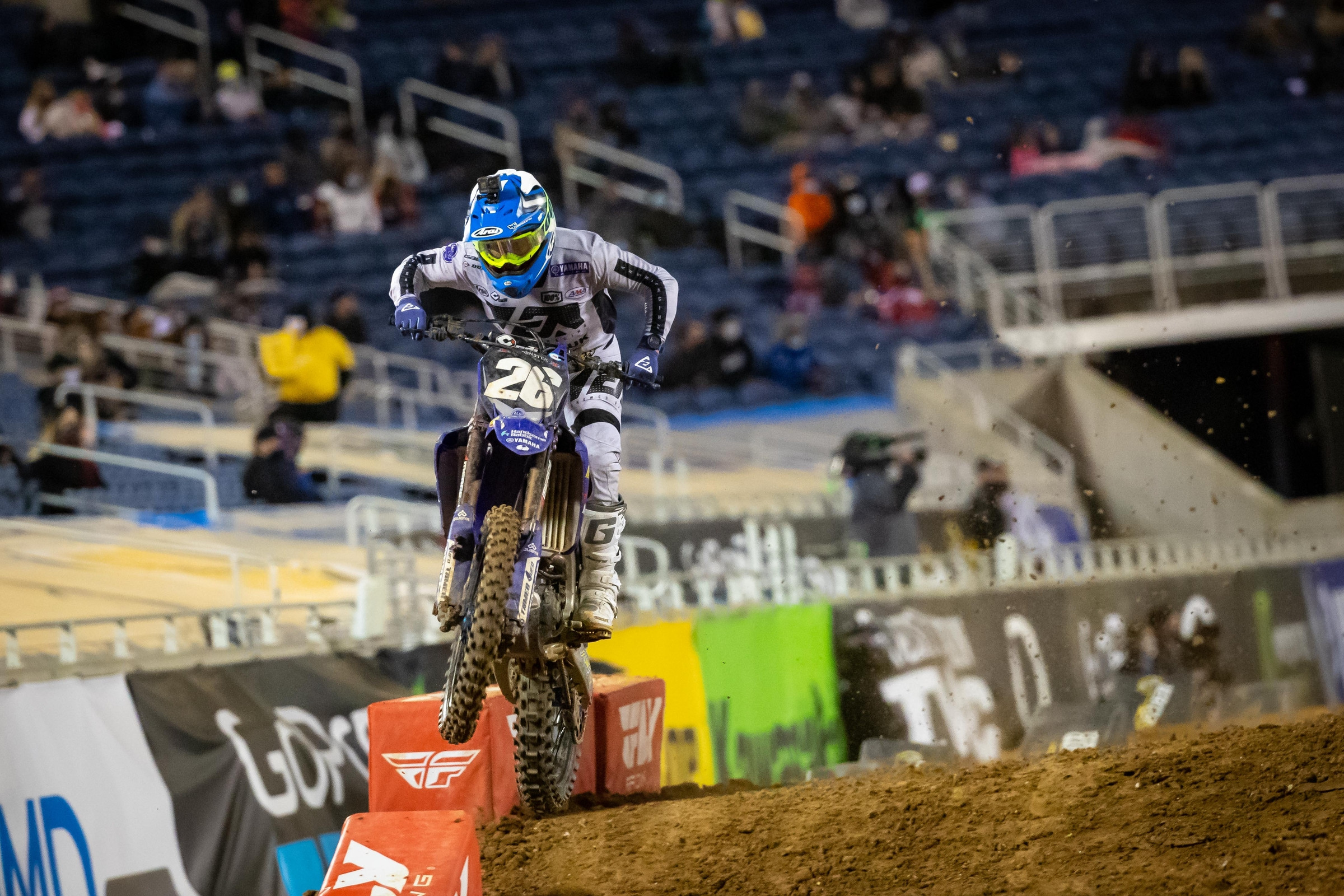 At the opening round of the 250SX West Region, a handful of riders went down with injuries. Luckily, some riders will be lining up this weekend—Jordon Smith, Alex Martin, and Jerry Robin included. We rang up the trio to get their take on what happened at the opening round and their thoughts on the immediate weekend off before this weekend’s second round at Daytona International Speedway.

Racer X: How’s it going heading into Daytona?
Jordon Smith: Yeah, I had a pretty bad crash at the opener, luckily I was able to walk away from that one. I actually came out pretty healthy for how bad that crash was, I was just kind of bruised and scraped up. Got back to riding on Wednesday, and now my thumb is actually doing a lot better than it was before Orlando. I’ve had about four days on the bike between Orlando and here—I think the thumb shouldn’t be an issue, and the injuries from Orlando shouldn’t be an issue. Should be all systems go and battling for the win.

How was the race day and night actually going before the crash?
Yeah, it was actually going great considering my riding and training that I had coming in. I had actually only rode for about two weeks coming into Orlando, so I didn’t know what to expect and I didn’t know where my speed would be. A lot of times when I take that much time off I lose some speed and stuff. I qualified third or fourth and had a pretty good heat race—made a mistake in the heat race but my speed was good. I didn’t get a very good start on the first main event start, but after the red flag [restart] I came out pretty good. I was running second and I was feeling good—right where I wanted to be. Obviously I made a mistake going into the whoops, so things didn’t go as planned. Up until that point everything went pretty good.

Where you straight up one handed in the whoops?
Yeah, my hand with the bad thumb, whenever the bars got ripped away from me, my hands got ripped off the bar. At that point you’re just along for the ride. It’s like trying to ride a bull with only one hand! Not good! [Laughs]

Racer X: How were you feeling coming into the season?
Alex Martin: I had a pretty solid off-season with my new team. We only had two actual test sessions, and I was really happy with the bike so the rest of the time was spent getting physically ready. But the last couple weeks before Orlando 2 I had some really good days at the practice track, so that had me pretty excited to go racing.

Do you remember the crash at all and do you know what happened?
I remember the whole day right up until the parade lap of the main event. After that I don’t remember anything until about 3 a.m. Sunday morning. I literally woke up, did a body scan, noticed my whole body was hurting and then started to realize something bad must’ve happened. Also, I think [Cameron] McAdoo's footpeg left a pretty good gash in my left hamstring.

How are you feeling coming into the weekend?
I’m feeling pretty good for Daytona this weekend. I’ve been very proactive with this injury and have been doing a ton of physical therapy to get back on the gate. I’m also very lucky we had last weekend off, that definitely helped give us all a little extra time to heal up.

Racer X: How were you feeling coming into the season with your program and the off-season preparation you had?
Jerry Robin: I was feeling really good coming into the season! I had a pretty bad sprained ankle so that had me off the bike a couple weeks and it still flares up from time to time, but in general I was comfy on my bike going into the season. I wish I had some more time to get used to my race bike before race day so I felt a little stiff at the opening round but I'm sure going forward it will get better.

Take me through what happened in your crash in the heat race and what injuries you had from it.
The crash during the heat race was just purely first race jitters I think. It's the first lap of round one so obviously people are going for it and want to make it straight through to the heat race. Probably six of us had to double the triple and a guy behind our group went for it and landed on me. Honestly, I just ended up with road rash, a sore back, and an AC joint separation that wasn't bad so for how bad it could have been, I ended up really lucky from that one!

Having this off weekend right after the opener, how helpful was that to get some recovery for your injuries and how are you feeling coming into the second round?
It's always nice to get a weekend off and let some things heal. I'd say most of us racers are always dealing with something and need to let something rest. I'm really looking forward to Daytona whether it's rain or shine. I'm ready to race!