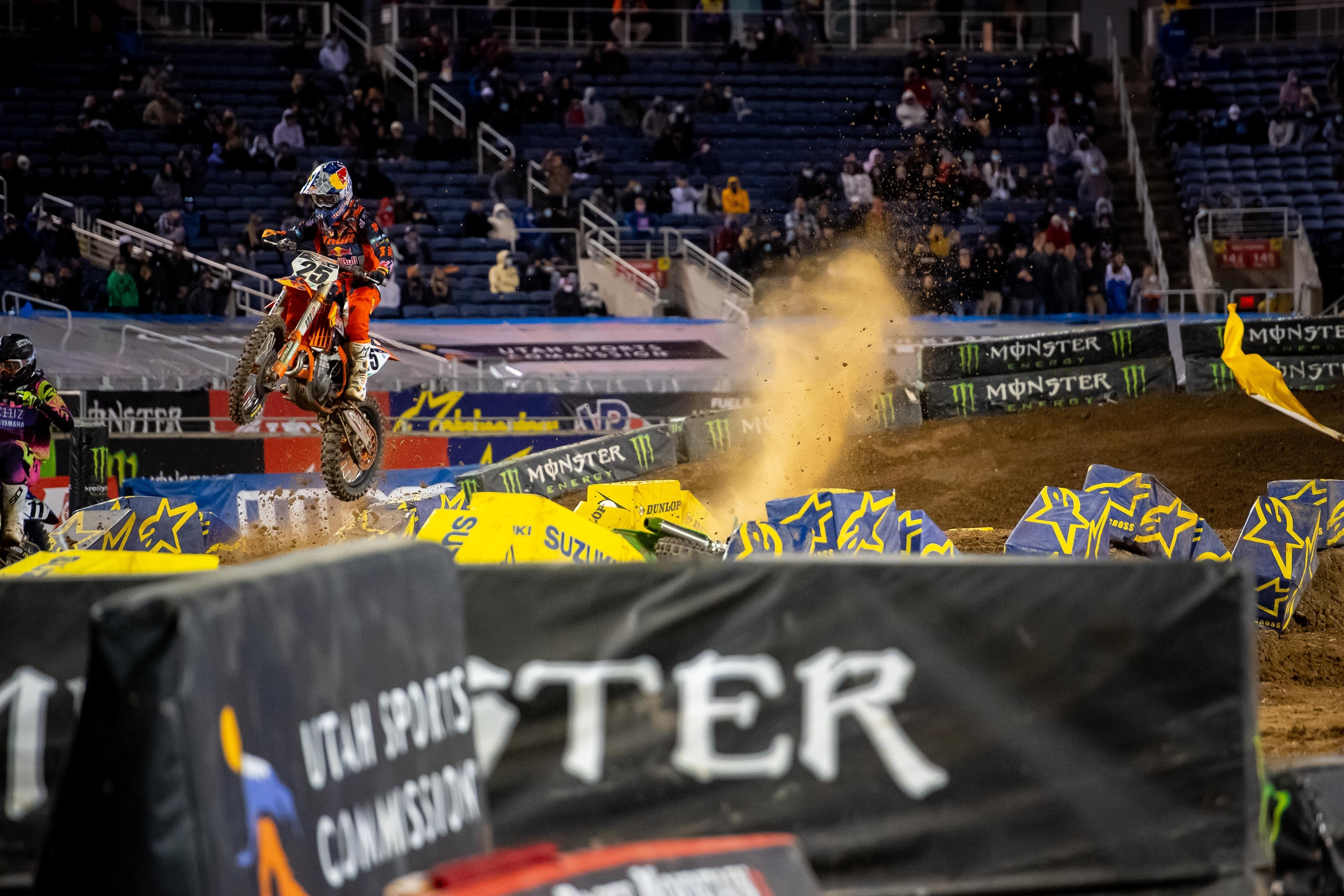 Ryan Villopoto’s retirement after four-straight Monster Energy AMA Supercross Championships led to a #Who’sNext marketing campaign for the series, but the new star turned out to be an old one. Ryan Dungey captured three more titles of his own. Only following Dungey’s own retirement after tenacious battle in the ’17 campaign would we get the real answer to the #Who’sNext question. Sure, Eli Tomac and Ken Roczen were proven race winners and champions, but Marvin Musquin and Jason Anderson certainly factored as players. Musquin, especially, turned up the heat by taking the Monster Million at Monster Energy Cup, winning Red Bull Straight Rhythm and a slew of off-season international events, but Anderson had his own run by winning the AUS-X Open and challenging Musquin wheel-to-wheel in a highly underrated battle at the Geneva Supercross (Anderson fell down, and Musquin scored the win). These guys were ready for 2018.

It showed. Marvin won the opener, Anderson finished second. Anderson won round two. Anderson kept it pinned while others stumbled, then managed the campaign to claim the 2018 Monster Energy Supercross Championship. Musquin, who hurt his shoulder at round two, took second.

Since then, they have battled their own share of injuries. Others, like Musquin’s own Red Bull KTM teammate Cooper Webb, found championship form. By the start of 2021, there were plenty of questions for the Musquin/Anderson duo. Anderson was no longer working with star trainer Aldon Baker, Musquin had missed all of supercross in 2020 with knee surgery. Anderson had not even won a race since his 2018 title season. When he was offered a chance to restake a claim to the top and call for revenge on those who doubt he could win again, all he could say was, “I guess they have some data on their side.”

Could they get back where they once were? Not in the early stages of 2021. Musquin collected some podiums but also crashed far too often. Even though he fought back each time, Marvin showed no indications that he could beat the likes of Webb, Tomac, or Ken Roczen. At his old level, Marv could beat those guys on the right night.

Musquin’s second-place finish at Orlando 2 was more like the old Marvin. He started up front, avoided the dirt, and kept pressure on Webb the entire way. A lot of testing and work has paid off, and Marvin indicated he’d found a new level—maybe even his old level.

“Obviously, this year has been tough, but it’s a comeback, I feel like, from my knee injury,” he said. “I wasn’t even sure when I had my first day riding supercross if the knee and the leg would have been okay. Riding outdoors is one thing, but supercross is different. But I work hard, and the feeling is back, so I’m excited for the future.

“I’m really happy that we got to try something this week with the WP guys and the team,” he added. “They came up with the ideas and new parts for the air shock and a little tweaking of the forks as well. It was a decent combination for me to feel more comfortable and to be more happy and obviously confident.”

He was especially happy to podium in Orlando 2 because the track was rough, but his bike reacted well. Marvin has vaulted back to fifth in points (Adam Cianciarulo was fourth in the series but crashed out of Orlando). It might be too late for a title run, but simply returning to the front is a worthy goal in a comeback year.

Anderson had to dig from even further back. While Musquin grabbed a podium at round one, Anderson struggled through a terrible night, fading from eighth to 15th with arm pump. He hovered around the 6-8 range at the next few races, but at no point showed the speed of the old 2018 level. He even missed a race with a dislocated finger. At that point, Anderson took to Instagram to say he would miss Indy 2, but he also apologized to his sponsors and supporters for the struggles early in the season.

Then, suddenly, he got better! He returned for Indy 3 and took sixth, his best of the year until that point. It continued with the fastest lap in qualifying during an Orlando 1 session. From a bad start, he made a late run at Tomac for fifth in the main event. A crash with lapped rider Shane McElrath ended the charge. He took eighth again, but the signs were there.

“It was an improvement all around for me today,” Anderson said in a Rockstar Energy Husqvarna team statement. “My practices were better, and my racing was quite a bit better, so If I could get a start it would help my results. In the Main Event, I got up there after a not-so-good start and got behind Tomac in sixth, but I came together with someone, it was more my fault than anything, and dropped back but we’ll move on to next week and keep progressing.”

Orlando 2 was another step better. Anderson was fastest overall in qualifying, and then he and Musquin set the clock back with a big heat race battle. On the last lap, Anderson dove inside and knocked Marvin down, scoring the win. In the main event Anderson got a terrible start again. Roczen’s comeback to fourth got the headlines, but Anderson was one position further behind him on the first lap. Roczen got to fourth, and Anderson this time completed the pass on Tomac. He finished fifth, a season best.

Here’s how @ElHombre_21 got it done in 450SX Heat 2️⃣#SupercrossLIVE#DropTheGatepic.twitter.com/N3mfbsTKxl

“My night was a lot better,” Anderson said. “I had a good practice and ended up P1, had a good battle in the heat race and got first in that. In the main event, I kind of had a bad start and worked my way up to fifth. I’m getting better and feeling better, so hopefully we’ll have an even better weekend in Daytona.”

Anderson’s turn around has been so quick that it makes one wonder if there was a pre-season issue that he’s only now gotten fixed. Anderson’s not one to reveal much—you’ll never hear him talk about testing or setup, for example. Either way, he’s a totally different rider than he was at round one.

Most supercross seasons see the contender list dwindle during the season. In this case, Musquin and Anderson are just heating up at the halfway point. Can they dial in that 2018 feeling? There might be a different answer to that question than the one we saw the first few weeks of the season.