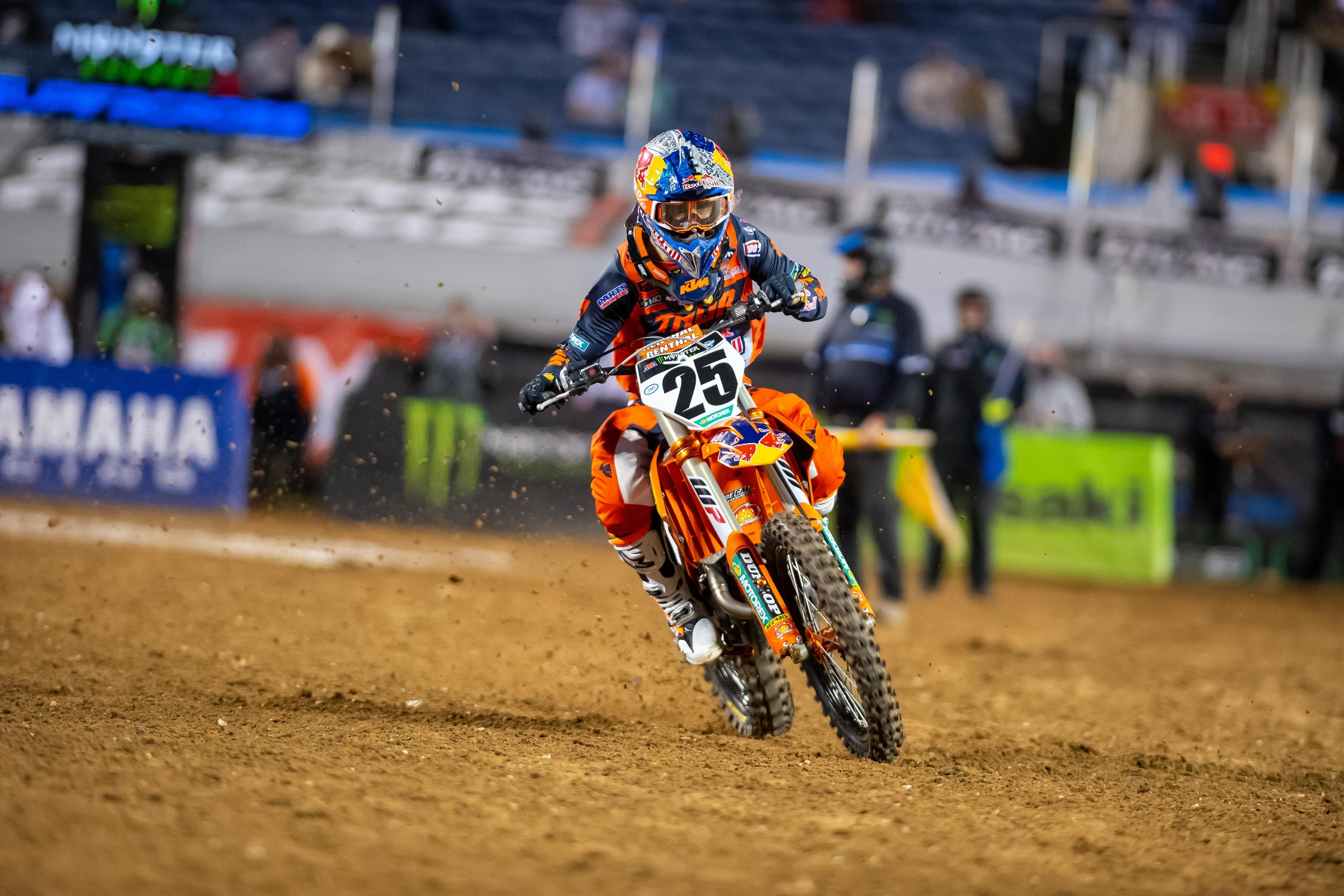 Between Musquin and Barcia

It was an all-Austrian built podium at Orlando 2 with Red Bull KTM’s Cooper Webb and Marvin Musquin going 1-2 with Troy Lee Designs/Red Bull/GasGas Factory Racing’s Justin Barcia rounding out the podium. It’s not the first time that KTM’s group of motorcycles have swept the podium at an AMA Supercross, but it was the first time GasGas was part of the sweep. For Musquin, his third podium of the season was arguably the best he’s looked all year long while Barcia was able to keep Eli Tomac and Ken Roczen behind him for nearly the entire race to land on the box again.

Both riders spoke with the media via Zoom after the race.

Racer X: Marvin, just take me through. You’ve had so many problems on the first laps of these races. A much better start. I know there was a little chaos on the first lap of this one, but what is the sensation like when you finally do get a good start when there have been so many races where it’s been a problem?
Marvin Musquin: It’s a great feeling. I had a great start in the heat race, and I was leading, so that was awesome. When you have no one in front of you, you can pick your lines and focus on yourself. So that’s a great feeling. In the main I had a great start too. AC [Adam Cianciarulo] got me on the corner, and I had to back it off a little bit, and that’s how I lost a little bit of ground. Then it was better, then I got to third place. The two guys up front had a little bit of a gap, so I was a little bit on my own. It’s good. It’s good to be on the clean spot and have room. Then you can focus on yourself and do your riding. The heat and then the main was actually pretty good.

With this under your belt now, is this something you can build off of, now that you’ve got time up front and you know where you stand? You were pretty close actually to Cooper for a while. So, is that a big confidence booster now?
Yeah, it is. I’m super happy that we tested this week. I just had a different setup today. Obviously, it showed. I showed better riding, to be in that position and to gain a little bit of ground on Cooper there. I started slowing down in the whoops. It was very, very sketchy. Super easy to make mistakes. I backed it off a little bit and that’s where I couldn’t make up any more ground on Cooper. I felt quick. I was telling the team, Frankie [Latham, mechanic], and Mathilde, my wife—I said, I had good feeling and fun, not everywhere on the track. I had fun and pleasure on the tough track, so that means a lot. That means that the feeling was good, and the bike was better. So, I’m happy with that.

You were out for quite a while, and that first round podium you actually looked kind of surprised that you ended up on the podium. Now you’ve gotten two more. We’re eight rounds in. How would you rate where you are right now in your season, how you’re feeling out there, and just overall how is your season going?
To get the very first podium at Houston, it definitely surprised me. Coming back from missing a whole season, a whole year, it was tough. But I was glad to be back close to my full potential and building from there. After that, it wasn’t the way I wanted to. Then I got another podium at Indy 3, but now I feel like I’m in a better position because on a tough track like today I was able to ride good. So that proves that the feeling with the bike is better. Hopefully, we just keep on getting better and go from there. Obviously, this year has been tough, but it’s a comeback, I feel like, from my knee injury. I wasn’t even sure when I had my first day riding supercross if the knee and the leg would have been okay. Riding outdoors is one thing, but supercross is different. But I work hard, and the feeling is back, so I’m excited for the future.

Today just looked so much better on the motorcycle. Was it a simple change of there were just changes made during the day, during practice? Or was it just the simple fact that tonight was a good start and you got to run the pace up front?
For sure, the settings that we had today helped me. I’m really happy that we got to try something this week with the WP guys and the team. They came up with the ideas and new parts for the air shock and a little tweaking of the forks as well. It was a decent combination for me to feel more comfortable and to be more happy and obviously confident. Practice went pretty good. Everybody knows that lap times are, for one lap of qualifying everybody is very fast. So, you can’t really judge on that, but if you ride in the window at the top five or six, seven, it’s good. Then moving into the heat race, I had a great start and running up front helped obviously, but definitely the bike setup helped me for this weekend. So, we definitely had basically the same track as last weekend, and I feel better each week and have more confidence on the bike. So, it was a good test for me and for us as a team.

Racer X: Bam Bam, good ride tonight and nice to see you back on the podium. Eli [Tomac] was behind you for a lot of laps. You guys had a really nice battle. Did you find yourself changing lines at all? Did you find yourself trying to combat him and hold him back in different spots? Or were you really not even noticing him back there? Just take us through that.
Barcia: Oh, no. I could see that green machine behind me a lot of those pivoting corners, so the pressure was definitely intense. The first half of the race, like I said, I wasn’t getting through the whoops very good. I was just jumping them, but it wasn’t happening for me. So, I went to skimming. Then when I went to skimming I kind of broke him a little bit, which was cool. Then Kenny came, so it was a double whammy for me. Once I started skimming whoops, I did close on Marv a little bit. I was just a little bit too far off from those bad laps in the beginning of the race. The pressure was extremely intense from Eli, and then Ken at the end. So, it was a wild day for me, for sure. I had the crash and then had to regroup from that. I qualified P18, so that was not great. All in all, turned it around. Like Coop said, working on the bike, the air shock for sure. I wasn’t able to test this week, but I’m looking to kind of regroup and do some testing before Daytona and get the bike a little bit better for certain conditions. All in all, the team did a really good job today. We made an adjustment before the main event and it was positive, for sure. Definitely got to keep getting good starts and putting myself in a good position. Would definitely like to get back up there.

How confident were you coming into the night after getting banged up? Were you dealing with anything specific, injury-wise?
Yeah, it was difficult. Like I said, qualifying P18 is not confidence-boosting whatsoever. My ribs kind of hurt pretty bad, but I don't think anything is broken or anything like that, or I would be really messed up. Honestly, it was just a weird morning for me. First practice felt good, then I had that crash. It was a freak crash. I landed on the finish line and probably grabbed too much front brake and I full tucked with my front wheel and I just went flying. To come out and get third, definitely took a lot of mental toughness for sure. Just never give up kind of attitude. That’s how I’ve always been. It was a good night. Like I’ve said, this is not my best conditions. I’m kind of a guy who likes to grab a handful of traction. So, this has been definitely teaching me to be smooth. Everything is still pretty new to me with the team. I get along with the team super well, but we’re still searching, trying to figure things out. All in all, I’m super happy with the team and the whole KTM group and the bike and stuff, but definitely we’ve got some more work to do and want to win a lot more races. It’s not over until it’s over.