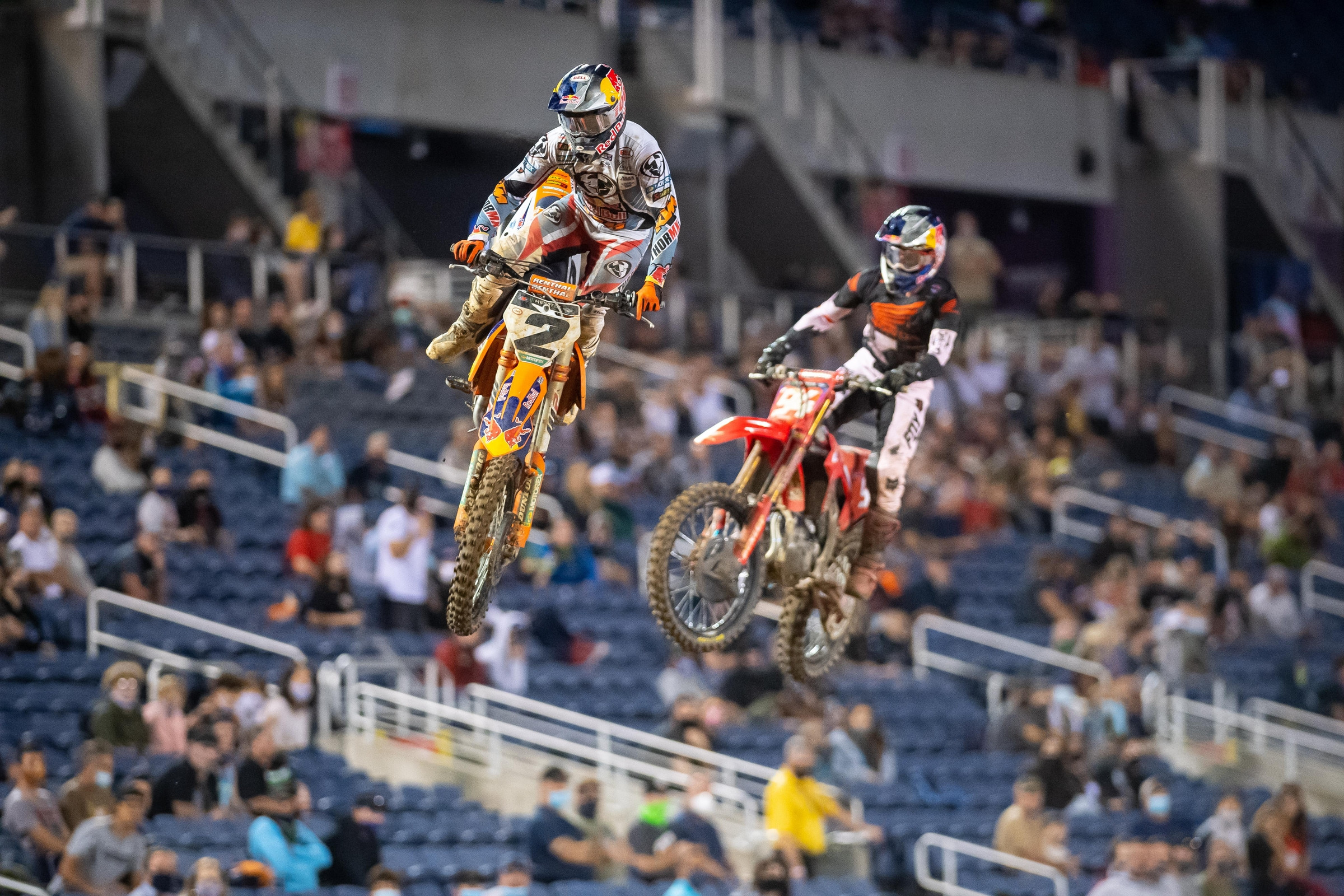 The 2021 Monster Energy AMA Supercross Championship visited its first outside venue over the weekend when the gates dropped in Camping World Stadium in Orlando, Florida. This was the first time the championship has raced in Orlando since 2007, so this year’s layout replicated that of the 2007 Orlando Supercross (you might have heard this once or twice over the weekend). With several talking points in both classes, we fired off questions to long-time pro Jason Thomas to get his insight on the action at the seventh round.

You raced Orlando in 2007, lots of talk about this track using the same layout. Do you remember the '07 track and race and how did this one compare?

It was the same layout, and that was a cool throwback aspect. In practice, though, it really wasn’t that similar. The jumps were built differently for the 2021 edition. In 2007, the jumps were fairly flat and allowed everyone to carry a lot more speed around the racetrack. The 2021 jumps were much steeper, slowing speeds and forcing riders to ride more cautiously. Comparing the two on video, the speeds were much higher 14 years ago and the penalty for a mistake much less severe. RC and JS7 were blitzing through sections without much worry while the 2021 track was much more treacherous.

As for my own performance on that night 14 years ago, it was far less eventful than the battle between JS and RC, I can guarantee you that! I got a bad start (typical) and floundered around for 20 laps. I remember being frustrated with my own lack of intensity in that race, and even this far removed, I’m still not happy about it. In fact I would have left it out of this column but Weege told me to write about it. I should have been fighting for 11-12th instead of where I ended up, which was 16th. With 150+ main events to reflect on, there was a bit of everything results wise. That one was not a highlight.

Race winner Cooper Webb averaged a 50.9 lap time on Saturday. The 2007 winner, James Stewart, averaged 49.6. Does this mean anything?

In terms of a “who’s better?” analysis, I don’t think it means anything. I know that’s not the answer everyone wants to hear because we live in a comparison society but the tracks were far too different to view as apples to apples.

Not much passing. Is that a byproduct of the layout, the dirt, or just because everyone is so close on pace?

I think the layout was mostly to blame but there is no perfect layout. With the repetitive 90-degree corners, it was difficult to find a way around anyone without a mistake. The simple answer is that more 180-degree corners typically improve passing, more 90’s decrease passing. That’s a very basic stereotype but seems to hold water.

Florida dirt is assumed to be soft or even sandy, but Orlando was actually kind of hard and slick back in the day, and that's what it was again on Saturday. Explain the difference between Houston/Indy dirt and what the field saw in Orlando.

Florida dirt can vary in every way imaginable. Most people associate Florida with black sandy soil but there are also many clay veins that run throughout the state. Chad Reed’s old property, Tim Ferry’s facility, and Motocross of Marion County all have clay native to their property. The dirt almost has a white, gumbo like make up to it. It’s very sticky when wet and very slippery when dry. There will often be a sand aspect worked into that clay, too, which separates it from the Indy soil we saw a week ago. That small addition of sand improves its ability to absorb water and is also a big factor in why we didn’t have a muddy Orlando round. Had that been Indy’s dirt, we would have had a big problem on our hands.

What kind of bike changes can be made to compensate for hard dirt versus soft? We often hear riders talk about softening the suspension for hard pack. Why?

The general rule is that softer SX dirt requires stiffer suspension and harder packed dirt likes a softer setup. The logic is that softer dirt puts more of a load on the suspension, forcing it deeper into the stroke. To counteract that, teams will stiffen the setting, keeping the fork and shock higher in the stroke. That’s how it’s designed to function. With the ride height higher in the stroke, that also gives the suspension its full ability to absorb bumps instead of starting in a lower position.

Conversely, teams will soften settings on hard packed conditions to provide a plusher feel and also to increase traction. Hard packed bumps create very harsh feedback to a rider. Softer settings allow the fork and shock to absorb that harshness whereas a stiffer setting will absorb less and transfer more of that impact into a rider’s arms and rear end. Further, with the softer setting making the suspension ride lower in the stroke, the front and rear tires are pushed into the soil more than a stiffer setting would allow.

On the podcast you talked about Martin Davalos getting into trouble due to pushing the pace compared to the available level of traction. Can you explain that?

Martin can go really fast. In fact, he can go faster than most riders in a one lap scenario. Some of his speed comes from his willingness to push the edge of traction when entering corners. You will often hear me say, “Marty is going to lose the front end soon,” when watching him. When I’m watching him, I see his front end on the edge of control. His elite level of talent and balance saves him in most instances but fate can only be tempted so many times. He doesn’t lose the front end so often because of chance or bad luck. He loses the front end because he’s pushing the front tire past its limit. That creates a pace that most riders will never reach (that includes me—I could never get to that level) but it puts him on the ground, too. Entering a corner, Marty is willing to initiate a lean angle that most find problematic. When it works, it’s magic. When it doesn’t, we’re left saying, “Marty lost the front end, again.”

Are you worried about Eli Tomac? Did he just get another bad start or is there another issue compared to past years?

I’m not worried, per se, but I have not seen the speed advantage that I am accustomed to seeing. It’s only February and Tomac is a notorious late season charger, so maybe we are just early on our expectation. The trouble is that he is losing points and the gap is growing quickly. If he finishes behind Kenny Roczen at Orlando 2, he’ll be down over 30 points and regardless of your patience level, that has to be viewed as a concern.

I am not sure if Tomac lost a step he previously had or if Roczen and Webb have improved but through seven rounds, there seems to be a small change in where we ended 2020.

You saw the Dylan Ferrandis crash. What happened?

I only caught the end of it but the aftermath was worse than the actual crash. Adam Cianciarulo was unable to stop and placed his front tire squarely in Ferrandis’ back. That didn’t appear to be a comfortable impact, and it’s probably requiring daily massages this week for the #14. The word is that he escaped serious injury which is great for everyone involved. It certainly could have been much worse.