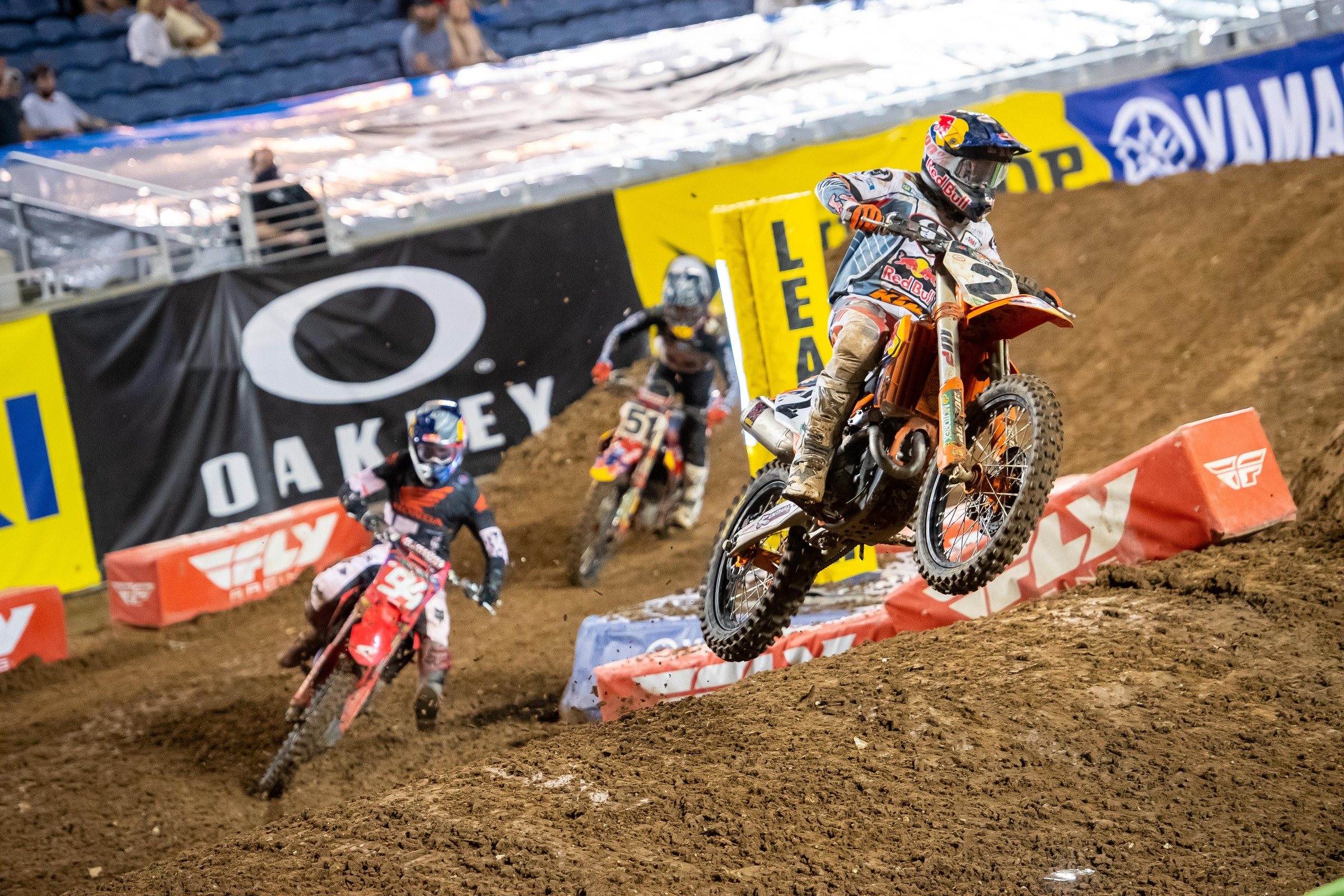 Early in the main event at the seventh round of the 2021 Monster Energy AMA Supercross Championship in Orlando, Florida, Red Bull KTM’s Cooper Webb pounced on a unique opportunity to steal the lead. ARockstar Energy Husqvarna’s Zach Osborne grabbed the holeshot but then swapped sideways in the whoops, allowing Muc-Off Honda’s Justin Brayton to take the lead. Brayton held onto the spot for a couple of laps relinquishing the lead to the man running in this place at the time.

As Honda HRC’s Ken Roczen was looking to size up a pass on his former teammate, Brayton pushed Roczen just slightly wider entering the second-to-last rhythm section of the track. With Roczen suddenly a bit off line, Webb jumped up the inside to immediately pass Roczen for second in the rhythm lane and go right up the inside at the end of the section to also steal the lead from Brayton.

The move proved pivotal in the race as Webb would not lose his spot at the top the rest of the race, despite Roczen never dropping more than a few seconds back of the 2019 champ. With the pace so similar at the front, Webb’s quick thinking to take the opportunity for the lead when he did afforded him the ability to control the race from the front for most of the main event.

“It was a great race tonight, we were one and two for pretty much the whole thing, tooth and nail,” said Webb. “It was a tough race, the track really broke down a lot, especially from the beginning laps and it’s definitely a little different when you are leading the majority of the Main Event. I made a few mistakes those last few and Kenny caught up, but I was able to get it done and man does it feel good.”

Webb’s second win of 2021 places him 13 points behind Roczen in the championship. Roczen landed on the podium for the sixth time in seven races. Despite seeing his three-race win streak end, Roczen was fine with the result.

"I got held up a little by Justin [Brayton], but that’s okay, he was riding awesome, so we were all battling, and Cooper got us both in this turn," said Roczen to NBCSN. "Overall you can’t win ‘em all, we had a good solid night and minimized the damage."

As for Brayton, the sneak attack from Webb was the beginning of the end a bit for the Muc-Off Honda man as he was immediately shuffled back to fifth within a few laps. The quick drop may have been a prelude to an issue that persisted as the race went on. He finished 11th.

“I found myself in the lead,” Brayton said to our Steve Matthes. “I got around Zacho and didn’t feel terrible, obviously I felt a lot of pressure from Ken and Cooper. Ultimately, I lost my front brake which I should still do better than 11th but yeah, my front brake. I don’t know, it was a new system and my first time riding with it.”

Brayton said eventually his front brake went away completely, leaving him pulling his lever into his knuckle without getting any actual stopping power.

Be sure to check out 1:20 in the highlights video below to see Webb’s pass that secured him his 13th career victory.