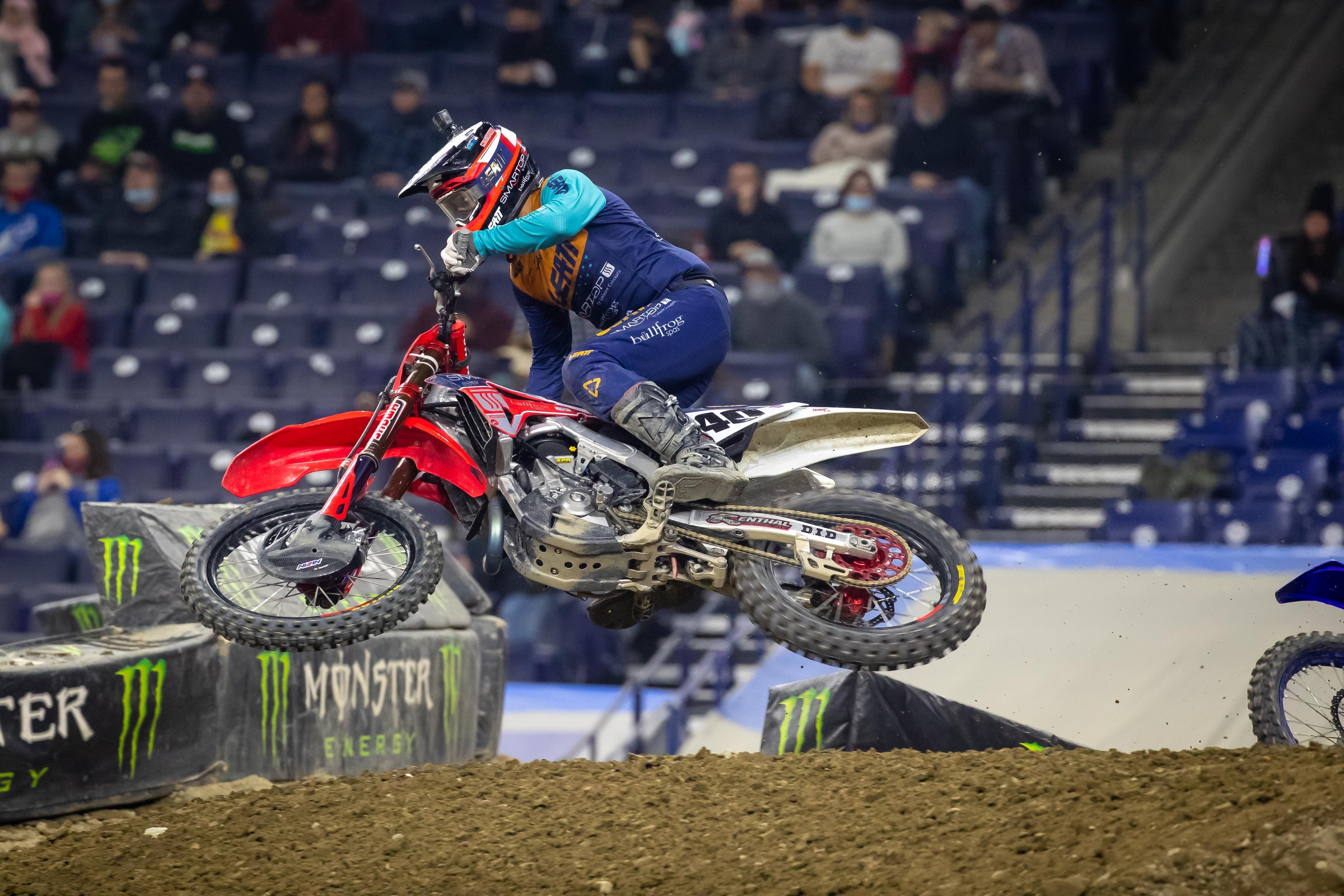 Redux The Trouble With Lappers

When I first saw Dean Wilson from the press box in Houston, I didn’t see anyone else. Dean was riding alone, and as Ken Roczen closed on him, it seemed obvious Dean would move out of the way. Then he didn’t, all hell broke loose and four seconds later Dean had cost Kenny a win. We had to dive deep into Dean’s story to figure out how this actually happened. Late in the race, Dean was pedal-to-the-metal trying to hold off Dylan Ferrandis (who finished second at the race prior). Ferrandis then yielded to Roczen, Dean didn’t realize it. All he could think was, “That’s Ferrandis back there. Hold him off.”

It was bad. Dean admitted he was at fault, and it was inexcusable. It was a little bit nuanced, though. The easy story is to say, “You’re slow, you’re not in the race, move.” The reality of today’s races is more complex than that.

From the outside, it’s easy to brand lapped riders. Lapper=loser is pretty much how the equation works. But on the night when Dean held up Kenny, he finished in 11th place, which matches his best finish this season. That means he beat exactly half the field. Being 11th best in the premier class of supercross, is very, very good. Dean was so strong and fast that, after Webb and Roczen slowed each other with a block pass, they never caught him (Watch it again below in case you missed this). Dean went across the line ahead of them and never got lapped. Dean’s average lap time was two seconds slower than the race winner. That’s about 4 percent slower. Four percent! That’s the difference between race winner and lapper=loser.

Which leads us to the latest situation from this weekend, as Vince Friese, while going a lap down, got hit in the back by Justin Barcia. Barcia crashed hard and dropped from third to finish 19th, most likely killing any championship hopes. Eli Tomac got caught up with Barcia and went from fourth to a seventh-place finish. That’s devastating and no one, most certainly not Barcia or Tomac, are going to be pumped on this.

Friese has a checkered history of on-track incidents. Actually, it’s not checkered, because checkers are black and white, and Vince is really only on the dark side of all incidents. The pits are overflowing with stories of take outs dished by Vince. He’s been suspended, fined, warned, and put on probation. This year alone includes a Tomac dust up at the opener, and Roczen getting mad when he was lapping him last week (we don’t have evidence that shows what Vince did wrong in either of those situations, which leads to the never-ending “Is it Vince or just Vince’s reputation?” argument.) The AMA had to talk to him again after the race on Saturday. Friese is a magnet for negative attention, and he earned that himself with too many bad incidents back in the day.

Last night, Vince was on the PulpMX Show and claimed innocence. Of course he did. From Vince’s perspective, he did nothing wrong.

“I feel bad, I never want to be that guy, but I’m sure it was Justin [Barcia] panicking in that situation,” he said. “I’m think if it was any of the other top guys, Cooper, Kenny, Eli, I don’t think they would have tried to thread the needle where he did. You kind of see it every year. He has some good rounds and then he kind of blows himself up at some point. It’s just unfortunate that it was my back wheel that he was running into when he blew himself up this season.”

(As an aside, I just want to say that I don’t see evidence of that. Yeah, Barcia is Bam Bam—he had a bump with Roczen in this race that could have been so, so bad—but usually Barcia does better in the races when he gets aggressive. Last year, Barcia’s big controversy was a dust up with Tomac as they came through the pack in Atlanta. Barcia held off Tomac at bay to the end. Bam Bam goes bam bam, but very rarely does he get the worst of it. One time at Daytona he took Malcolm Stewart out and they both went down, but you can counter that one example with dozens of other races where Barcia’s aggressiveness led to a better finish. Barcia doesn’t blow championships because he’s crashing out while trying to take other dudes down. He’s pretty good at what he does, even if what he does is something his competition doesn’t like.)

If you’re a lapped rider and get hit from behind, you’re going to get some blame. In this situation, I don’t think it was as egregious as Wilson, because Dean had multiple opportunities to let Ken by, including the start straight, which is by far the easiest part of the track. On Saturday, Vince got lapped by Roczen and Webb, but Barcia was still a few bike lengths back as they raced past the flat turn in the mechanics’ area. Suddenly, Barcia was right there and into him, but on a section of rutted jumps. The whole thing happened in a blink of an eye, in a rutted rhythm lane. Wilson's deal felt like it unfolded in slow motion, Friese's happened in a flash. After he got hit, Vince even looked back, as if to say, “What just happened?”

The problem was that Vince stayed in the main racing line, which is not a good look when it costs a title contender or two. Every rider in the pits is going to agree that Friese is a problem, they’ve got too many stories to share. Plus, lapper=loser in the eyes of the fans. I can’t play PR firm for Vince Friese—that’s up to Genova & Alessi Associates.

That’s not the point of this story. I’m here to discuss the broader picture, which is that lapper=loser. In the standard vitriol towards Friese, the comments will say lappers should just give up, slow down, pull off or pull over. Why was Friese even in the main race line anyway? He was getting lapped. His race was over.

Eh, it’s not that simple. When you’re racing dirt bikes in a stadium, when you’re literally taking the sport motocross and condensing it into the confines of a football stadium. You’ve made the track short. Also, 20-minute mains (which I personally love) mean more laps. Lapper=loser might be the perception, but Roczen’s average lap on Saturday was 49.0 compared to Friese’s 51.4. That’s two and a half seconds, which is about five percent slower. Five percent! Anyone that plays in the NBA that’s within five percent of Lebron James is perfectly welcomed to be out on the floor. The NBA has defensive specialists who fight for every inch and piss off all the stars. The players hate them but they’re still allowed to play. The AMA has several built-in fail safes to get rid of unworthy riders, like heat races and LCQs. Friese is simply fast enough to make mains. It might appear like a lapped rider is unworthy, or half as fast as the leaders, but the clock says Friese is only 5 percent off, and the 14th best supercross rider in the world on that night.

We can’t let 50-second supercross lap times and 20 minute main events cloud the real judgement of what’s really happening on that race track. Late in the race on Saturday, Friese was trying to hold onto 15th place, (he eventually finished 14th for his best position of the season). His team provides bonuses for finishes. He made more money by fighting to the end and beating eight other riders. It might seem like once you’re lapped you’re worthless, but the difference between 14th and 22nd can be huge in this business. Friese isn’t going to fight like hell for 19 minutes, then give up all that work and roll around for the final two laps of the race. Wilson wouldn’t do that, either.

“You want to do good for yourself or your team, there’s money on the line, and people forget there is a race there, too,” said Friese. “I just wanted to have a good ride and put the train on the track.”

So that’s what really leads to these issues with lapped riders. Blue flags can wave, riders can cheat a glance and get a feel for what’s coming, but 99 percent of the time they’re out there racing. Wilson was spending his brain power trying to go fast enough to hold off Ferrandis. Friese was paying some attention to the leaders, because he had let Roczen and Webb around, but he was also still trying to go as fast as he could and hold onto his best finish of the season. Occasionally, that intensity leads to bad judgement when it’s time to move over. Friese simply isn't going to coast around on the side of the track for the final two laps. He might be getting lapped, but his result still matters. So, errors in judgement aren't going to happen every time, but it’s bound to happen some of the time.

Vince Friese and his team can deal with their own bad PR. Dean Wilson had to deal with his. The riders who have actually dealt with Friese on the track can decide if he's wrong or not, and we all know how they feel. But when it comes to the broad equation of lapper=loser, the answer is a lot more complicated than it seems.