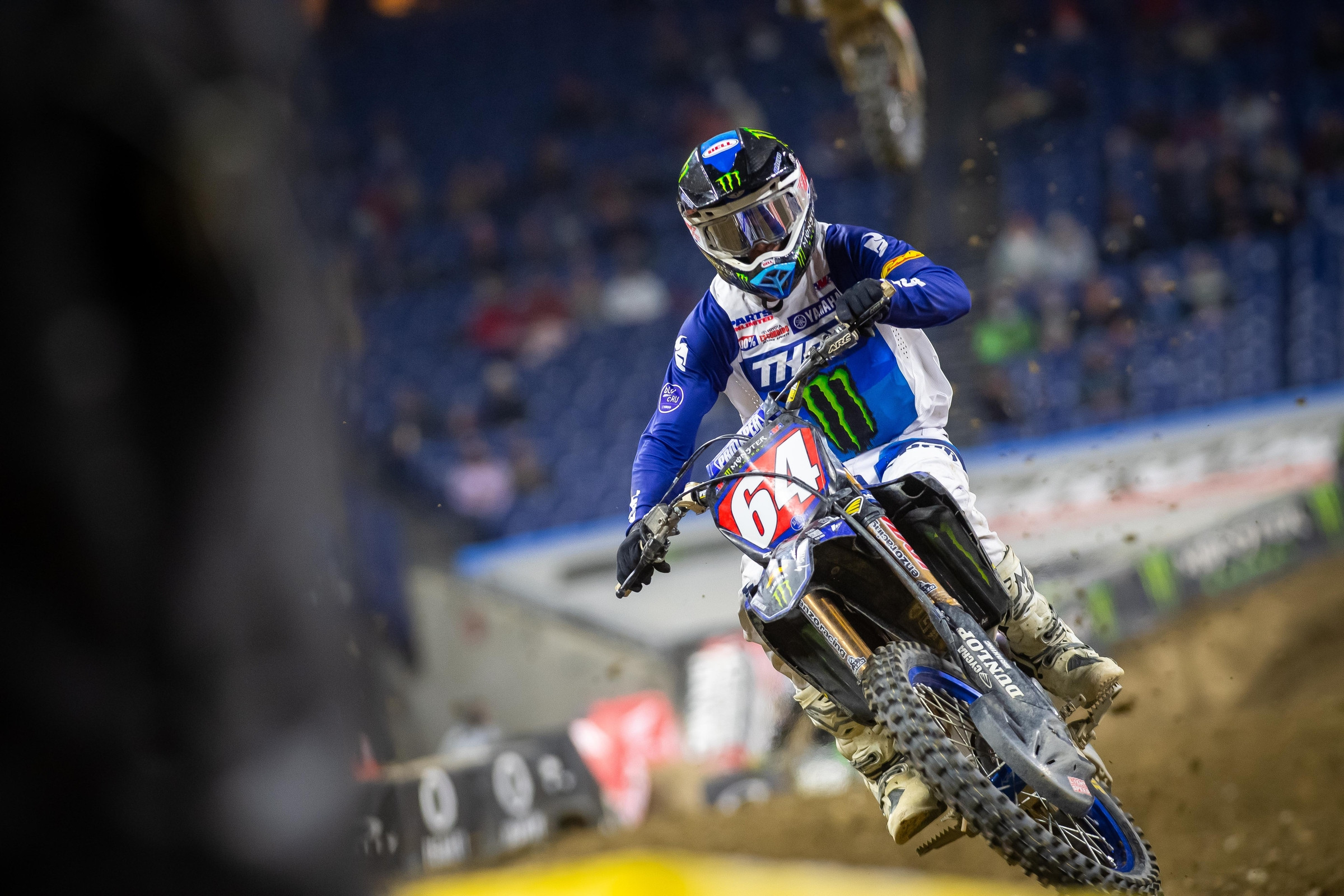 Following a third-place finish at the opener and a second-place finish at the second round, it has been Colt Nichols’ 250SX East Region. The Monster Energy/Star Yamaha Racing rider took the lead from his teammate and title opponent Craig and claimed his first race win of the season—and he never looked back. Nichols claimed three straight wins—and in the process took sole possession of the points lead. After first showing he had the late-race speed and fitness in order to finish out races, Nichols began to prove he could also get out front early and lead wire-to-wire, as he had done at the fourth round.

At the third race in Lucas Oil Stadium (the sixth race of the season), Nichols looked to sweep the triple header in the home of the Indianapolis Colts. His night started off with catching and passing Craig for the win in their heat race. Next up was the main event. Nichols got a great jump out of the gates, and positioned himself perfectly as he exited the first turn side-by-side with Mitchell Oldenburg for the holeshot, before quickly jumping to the inside and the lead at the end of the first section. At this point, it looked like we might be in for another wire-to-wire performance by the #64, similar to his ride a week prior in the first night in Indianapolis. Then, just as fast as he bolted to the lead, Nichols flung himself into dead last.

Coming out of the 180-degree berm after the standard supercross triple, Nichols’ front end missed the rut that exits the turn and leads into the takeoff of the double to start the rhythm section. With only his rear tire in the rut, just as Nichols was taking off, the front of his Yamaha knifed left hard and its rear end followed.

Nichols held onto the handlebars for dear life as his YZ250F turned into a bucking bronco. Although he didn’t come up short on the landing of the double, he downsided the jump with his bike perpendicular to the takeoff of the tabletop. This caused him to high-side, as he was thrown onto the top of the tabletop. After summersaulting, he quickly found himself standing up looking back at the entire field coming directly towards him. Fixing the visor on his helmet and waiving his hands as the field navigated both his downed bike and him, he had to wait for an opportunity to grab his finally bike—after everyone had gone by. Luckily, neither Nichols nor his YZ250F were damaged and he could do his best to finish the race in the best position possible. But he had work cut out for him. As Nichols remounted in dead last, his teammate and title threat Craig inherited the lead from his mistake.

Nichols got going away and started picking off riders one by one. He rounded lap two in 17th. On the third lap, he came through in 13th. Still a lot of work to go but he had a lot of laps to go. Eventually, he made his way into the top 10. His toughest battle would come in the form of young Australian Jett Lawrence. Lawrence got a less-than-ideal start of his own and was working his way through the pack whenever he and Nichols crossed paths. Back and forth the two went. A pass attempt by Nichols was undercut from Lawrence squaring off the turn and knifing back to retake the position. The duo continued to counter one another but eventually reached Oldenburg who was running in third. When the checkered flag flew, Nichols had climbed all the way to third place. Although a win would have extended his 11-point lead in the championship, Nichols salvage job allows him to keep the red plates and a six-point advantage over Craig as the championship heads to round seven in Orlando, Florida, this Saturday. Once the dust has settled, Nichols and Lawrence were seen chatting about their battles on the side of the track.

In his post-race interview on TV, Nichols explained his night.

"That was a battle," said Nichols. "I was coming through the pack and the first lap I was going over a triple and Christian was already on the other rhythm before the finish. I just kept digging. Shout out to my trainer Gareth Swanepoel, I've been working really hard ever since Salt Lake City last year, and I feel like my fitness is good. I just kept digging. Me and Jett actually had a pretty sick battle, that made fun going back and forth like that. I can’t really be disappointed, I did everything perfect, executed that start to a T, but just made a boneheaded mistake. So I really feel like I just let that slip away. But overall, you’re gonna have races like that. I gotta rebound next weekend."

Watch Nichols crash and then charge through the pack in the 250SX highlights from round six below: