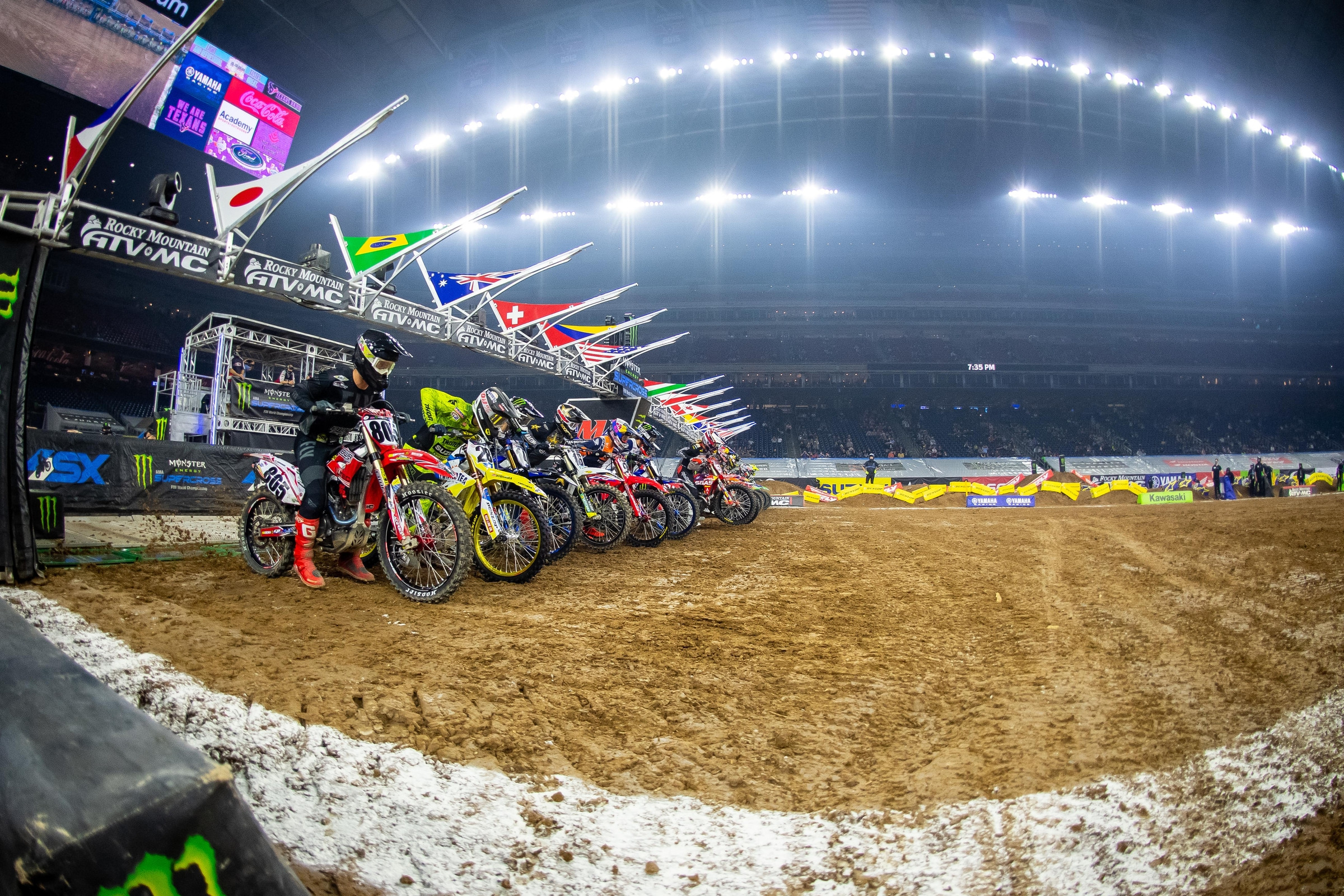 The third round of the Houston tripleheader provided us with perhaps the most controversial moments we’ll see in racing this year. With so much going on and so much to digest, we fired off questions to long time pro Jason Thomas to pick his brain about the chaos in Texas.

We saw a much different build to the track for the third round—including a completely different sand section—looking at it from the perspective of a racer, what did you think about this build?

It was definitely a step up as far as being more technical. The rhythm sections were more difficult and there were fewer open spaces for riders to rest. For the riders, the difficulty level was certainly elevated and that comes with an added degree of risk. I always liked the more technical tracks as it seemed to separate the skill levels a bit and lowered the importance of the start.

Jett Lawrence put Michael Mosiman on the ground in the 180-degree berm after the whoops. Does Jett have to be cautious of Mosiman at all times going forward?

I don’t know if it will be “at all times,” but he will get paid back eventually. The trouble for Jett is that he is in this title fight and Mosiman is not. That puts Jett in a much more vulnerable position with much more to lose.

It was tricky but for the elite, nothing that they were too concerned with. The difficult part of stepping on from the inside is that the bike is still turning on the take-off. Jumping from the inside also means riders land on the first tabletop at a slower speed, making the step to the next tabletop much more difficult. Riders using the outside line are able to straighten up and accelerate much harder, carrying speed across the tops of the tabletops. That all leads to smoother transitions and lessens the odds of a mistake. The obvious advantage of the inside line is being able to shorten the racetrack, cutting off 10 feet or so of unnecessary distance.

As for tripling to the inside, it required precision. Going too long meant missing the line and a very difficult time executing the tabletops. Coming up short had a much worse penalty, though, as Austin Forknerfound out in practice. Landing short while also angling for the corner is never a good idea.

It seemed like Christian Craig was going to run away with the 250SX main event win from the start, but Colt Nichols was able to keep him close and then pull off a pass to take the win. How was Nichols able to pull off this win? Similar to what Nichols did to Craig, Cooper Webb was able to slowly reel in Ken Roczen out front. Where was Webb making up this time on Kenny?

I think that the 250 main and 450 main both played out very similarly. Craig and Roczen both had a superior pace when the track was in great condition. As the main events wore on, though, the track deteriorated and both Nichols and Webb found it more conducive to their approach. I attribute a big part of their success to the whoops, especially Webb. Once Webb was able to use his rhythm technique to offset Kenny’s masterful blitzing, it was a totally different race. Webb is the master of late race tactics and once again, found a way to best Kenny on the last lap.

Nichols’ win gives him a share of the points lead. Is he a title threat? With Forkner and Hampshire missing the race, has the East Region title come down to Craig, Nichols, and Lawrence?

It’s absolutely a three-man race to the finish now (hopefully all three can stay healthy). None of these three have ever won a title so it’s anybody’s guess as to who is the favorite. My only question is how Jett will handle the pressure of this stage only being 17 years old.

Which incident made or broke your weekend in terms of PulpMX Fantasy?

I had a great fantasy weekend overall and really only had one complaint. Grant Harlan threw away a top ten finish and then pulled into the mechanics area two separate times to adjust his front end. That second pit stop cost me double points and if you were in the stadium, you would have been able to hear me yelling obscenities.

The other mentionable here was Dylan Woodcock. He had a nasty get off and looked to be hurt badly for a while. He is recovering but that was a scary one. You can read more about his crash and injury here. He was on a large percentage of fantasy teams and while we all get a bit caught up in the fantasy whirlwind, we have to remember that these guys can and do get injured.

Dean Wilson accidentally impacted the final result on Saturday. He said after the race he had Dylan Ferrandis on his tail, so he thought the bike behind him was Ferrandis charging back. It’s obvious to watch from a far and see what happened but how difficult is it to be battling for your own position but also not impact the leaders while you’re late in the race fighting for every position?

This was a bad deal for all involved (unless your name is Cooper Webb). Dean messed up, plain and simple. In that position, I was usually able to tell when the leaders were coming. You can typically see them closing in on you (just like you would see someone on your lap catching you). That gives you time to prepare and assess your surroundings before the leaders arrive. The only defense I can really give Dean is that he isn’t lapped very often and doesn’t have a lot of experience with how to handle it. I was practically an expert when it came to how to get lapped. I should offer courses in this specific area. All jokes aside, Dean apologized and said the right things but that won’t really fix it, unfortunately. Kenny has every right to be mad. Team Honda has every right to be mad. Dean knows that and will have to just work through it. In a week or two, no one will care anymore, and we will move on to some other incident.