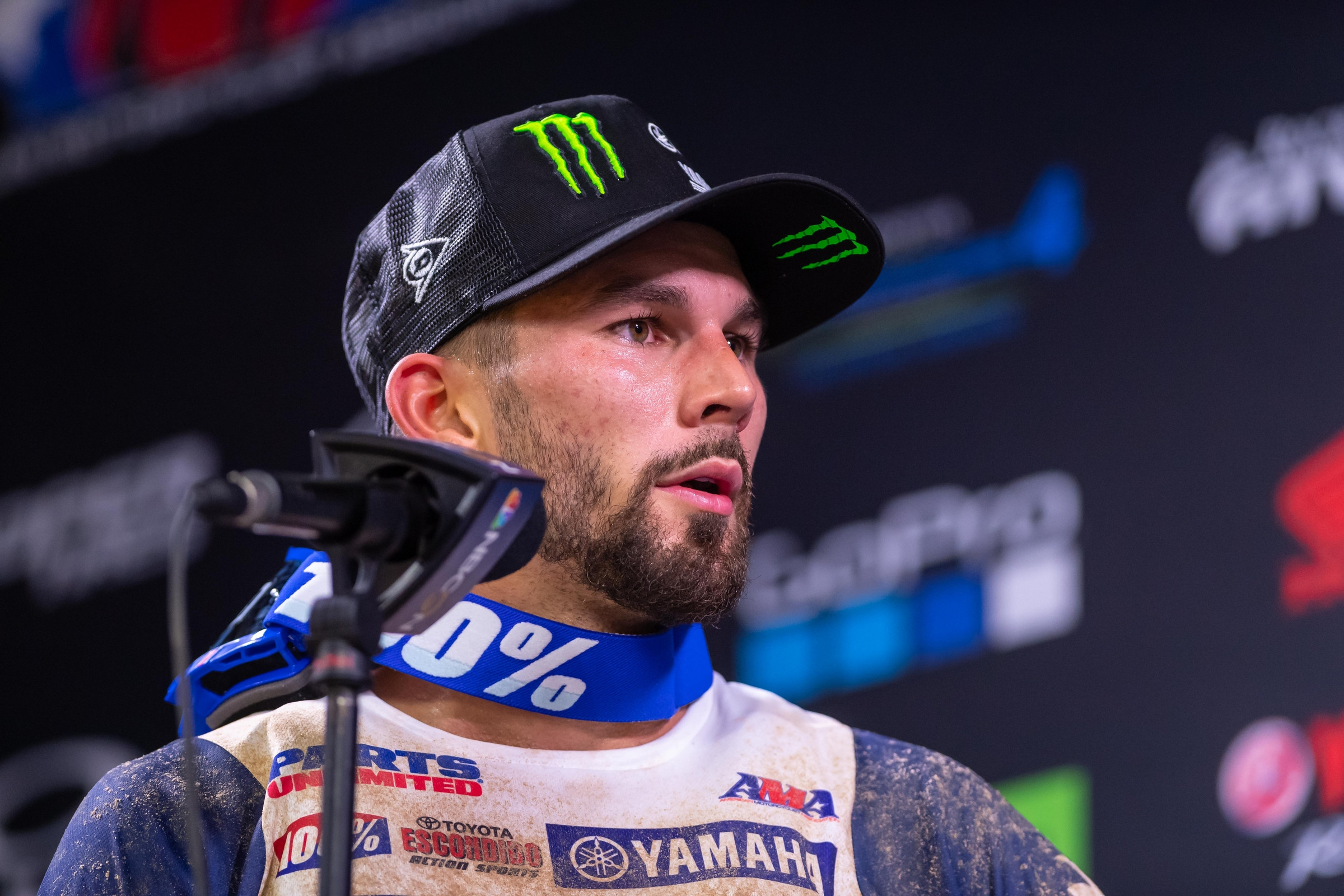 After a spirited fight in Saturday evening’s 250SX East Region main event at the Houston 3 Supercross, which saw two Monster Energy/Star Yamaha Racing YZ250F teammates immediately clear off from the rest of the pack, 26 year-old Colt Nichols came out on top of Christian Craig to handsomely win what was the third event of the 2021 Monster Energy AMA Supercross Championship. His first win since acing the opener at Angel Stadium back in January of 2019, it was a long time coming from the racer out of Muskogee, Oklahoma. On Sunday evening, and after he had traveled from Houston back to home base in Southern California, we tracked Nichols down and asked him about his first week of racing. Certainly happy to be home for a few days before jetting back east to Indianapolis, Indiana, for another trio of races, Nichols was in a talking mood and we were all ears.

Racer X: Colt, thanks for taking the time to do this, I didn’t want to stalk you down on Sunday night after you’ve flown all day, but you went out and won in NRG Stadium on Saturday night and I said to myself, “I’ve got to get Colt on the phone and get his take on all that went down with that win!”
Colt Nichols: [Laughs] It’s all good, EJ! I really enjoyed that race.

Three 250SX East main events run thus far in 2021 and 3-2-1 race scores for you. So far so good, eh?
Yeah, 3-2-1 for the Houston rounds. Yeah, I tried to position myself good. I didn’t want to come in like I did in 2019. I learned quite a bit from that season coming in and winning the first Anaheim and having the point lead for the first five races that year. Not that I didn’t want to win the first race of the season at Houston, of course I wanted to go and win the first race and the second race, too, but it just didn’t really work out, but I put myself in good positions to capitalize where I could and third was the best I could do in the first race and second was the best that I could do in the second one. On Saturday night, I finally got a good start in the main in this third race and I was able to win that one. I was really happy with my performance throughout Houston. I was a little nervous going in. I hadn’t ridden a few weeks before Houston. I had a little injury I was dealing with, so you just never know how it’s going to be until you get there, but overall, I was happy with the first three races.

Both Christian Craig and you took off like two bats out of hell when the gate dropped and it was around the halfway mark of the race when you motored up on Christian, passed him, and in doing so, ignited a battle. After you went back and forth, you reassumed the lead and started to edge away. What was your view of it all from behind the handlebars?
Yeah, I just tried to take the race away and tried to do just what I could. I stalked him all race, really, and got to watch his lines and see where he was pulling me a little bit and then I saw the countdown clock and I knew how much time we had left and I knew that if I was going to make a push quick and I just did what I did. I was riding a really solid race and wasn’t making and big mistakes, so I knew that if I was going to pass, I really had to push the issue. I did that. The lappers were crazy and we were both trying to navigate them. I was taking a little more risk with the lappers and that helped me with my cause. All in all, a pretty clever race. I bided my time and really kind of found the right time to pass him and it was just nice to win. It felt like a day out at the Yamaha track with me and him just kind of trading laps together, so it was pretty cool.

Yeah, I totally picked up on that in the media where you mentioned that during the race it felt like you and Christian were bashing out laps at the Yamaha test track.
That race, it actually did! Normally it doesn’t just because normally there is so much chaos going on that it’s not just two guys out there racing for the lead, but this time we came out one-two off the gate and all I saw the whole time was the blue #29 in front of me, so it did kind of feel like practice. We made a getaway from third place and put some distance there and it really felt like we were just trading laps like we normally would at the Yamaha track and it was actually really cool. It was pretty comforting for both of us. He knew I was behind him the whole time. Yeah, it really did feel like another day at the practice track. It was very cool.

While the main event was airing on NBC Sports, broadcaster Leigh Diffey made a great mention that both you and Craig had talked about trying to get to the front of the pack right into and out of the first turn. Concerted effort, eh?
Yeah, actually, the team kind of laid into us pretty hard after the heat race because we both started embarrassingly bad in our heat race. It was just not good. After the heat race and after we got back to the truck, the team was pretty vocal about it and they were upset and told us that we pretty much needed to get our shit together! That’s exactly what we did. We came to the line and we were ready for that main. The team wanted us to step it up and we did.

What’s been your take on the competition in 250SX East?
The first two races were pretty fierce because I felt like that pace between us five guys up front was pretty hot. I felt like all of us were pretty strong. Jett Lawrence is a little bit more inexperienced, but me, Christian, RJ Hampshire, Austin Forkner have all been in this series for a few years now. We’ve all won races and kind of know what it takes to win. They are all really good, talented guys with a lot of speed too and the pace really has been high. Even with Saturday’s race, it was kind of crazy how far up the lap chart we ended up getting. I think we lapped up to sixth place on Saturday. I feel like the guys we are racing on this coast are really fast and talented and whoever wins, has to pretty much earn it. The competition is good! There are three or four of us that are gong really fast at the moment. It comes down to getting good starts and putting yourself in a good position to win this championship. And with me, you know, I can’t complain about 3-2-1 scores. That’s pretty good and we’ve improved each round. I came into this season with a pretty good vision to really try and stay focused and to keep doing what I’m doing. We put in a lot of work during the off-season and I felt the most fit I’ve ever been coming into this season. We trained really, really hard during this break from Salt Lake City up to now to try and get to this point, so we did a lot of work. Me and my trainer Gareth Swanepoel did a lot of work and changed a lot of things up and I have to give a lot of kudos to him.

Here's a broad question for you: What’s your vision for your career over the next couple of years?
Well, the whole Star Racing team is actually moving to Florida. We’re doing that whole move. My sole goal right now is to go try and win this title. I want to win this 250 East Championship and after that, we’ll let the cards fall where they go. I have one more year with Star through 2022 and after that, hopefully we’ll move to the 450 class and see what we can do there. It’s insane. There are so many fast guys in that class right now. It’s crazy. That’s obviously everyone’s goal. Everyone wants to try to win and move up and try carry the momentum in with that big bike. It’s a learning curve, so the quicker I get in there, the quicker you can kind of learn and figure out what you need to improve on and try to get a little better.

Okay, what’s next? Getting on another airplane routed towards Indianapolis, Indiana real soon?
Yeah, I just landed from Houston today at noon and we drove home and tried to get everything cleaned up for the week and get ready to be gone again. We have to fly out Wednesday mid-day to go to Indy and we have to get tested on Thursday. It’s a really quick turnaround to go back to Indy to spend 10 days there. Overall, I’m just trying to get prepared for another 10 day journey.

Hey, did you bring the Houston trophy you won on Saturday home to California with you?
[Laughs] Yeah, I stuffed it in my checked bag and brought that thing home. Luckily, it didn’t have any damage! I’m going to put it on the mantel. It was cool to bring home another one, that’s for sure.