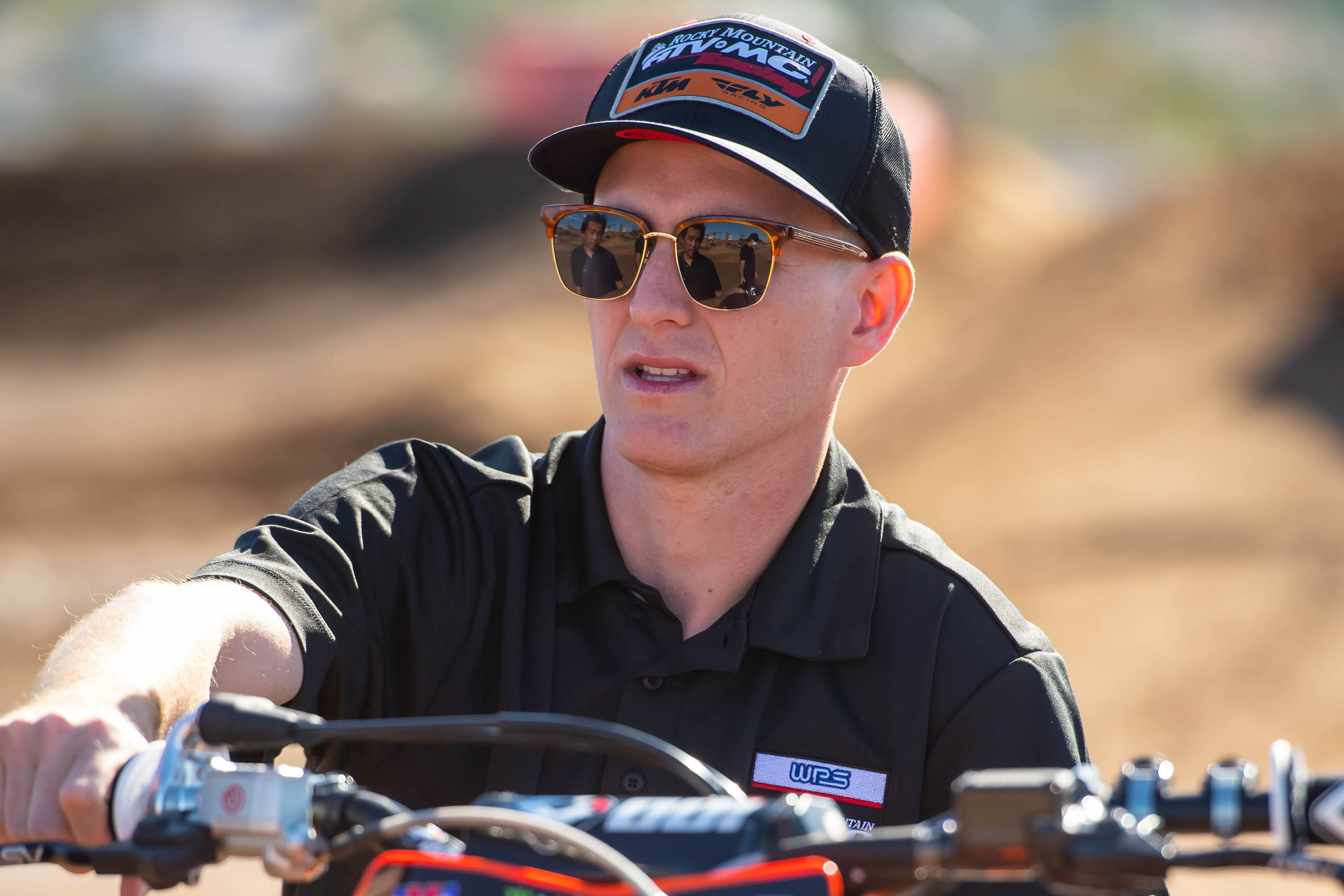 Our Steve Matthes reported on Monday night some news we didn’t see coming: Blake Baggett is out at the Rocky Mountain ATV/MC KTM team, and Joey Savatgy is in. Team Owner Forrest Butler, at today’s KTM factory racing team intro, could only say that the team couldn’t come to terms with Baggett for the 2021 season. So Savatgy joins the team alongside Justin Bogle, who returns for another shot with the squad.

The off-season news for Savatgy, who rode for Monster Energy Kawasaki in 2019 and JGRMX/Yoshimura Suzuki in 2020, had been quiet until now. We asked Joey about his new ride this afternoon.

Racer X: We didn’t hear much from the off-season market from you. Now all of a sudden it’s worked out. Was this a master plan or did you just get lucky?
Joey Savatgy: I remember talking in the middle of the season, and if I could write a list of places where I wanted to be, I have text messages that I sent saying this team would be on the list. Honestly, I’m kind of in shock that we kept it as quiet as we did, because in this industry as soon as one person knows it just goes from there like a chain. They’ll say, “Hey don’t tell anybody.” But as soon as they tell someone that person tells someone else. So I felt like we did a pretty good job of keeping it quiet, so maybe to some people it feels like a surprise, but it’s something we’ve been working on. This year as a whole has just been crazy. I don’t even think we can use the phrase, “If things go to plan.” Nothing has gone to plan this year, but, this was the number-one place on my list of where I wanted to be. Regardless of the back story, we made it happen and this is where we are.

Where are you as a racer right now? You came back and raced outdoors but it wasn’t up to your standards. Are you okay, physically, or are you still dealing with some lingering issues with your foot?
No, we’re good. I actually feel better in a riding boot than just walking around, I think it’s just more support. When I was out here a few weeks ago, I got my foot worked out, just to break up some scar tissue because it does get kind of tight in there. The only issue I had was in Colorado this year outdoors, I just crashed and caught my toe, twisted my foot around. I think even if I had had a healthy foot it would have hurt. But, don’t crash and you won’t have that problem. After that, no issues with my foot. That’s not even a thing anymore.

At any point were you talking to JGR for next year? Or were they not talking to anyone because they were unsure of their plans.
Yeah, I don’t read the internet much, for obvious reasons, but things kind of got twisted there. I don’t think they had no interest there, and vice-versa, I just think they, like a lot of us, where just trying to figure out what the next step was. You don’t want to get anyone’s hopes up until you have a game plan. They were just trying to figure out what they were doing just like I was. I don’t think it was like a, “Hey, we don’t have any interest, thanks but no thanks.” We were both trying to figure out own things out, and our paths didn’t cross.

Now the JGRMX team has shut down.
Yeah and that’s a bummer. You have riders, crew chiefs, mechanics who are now out of a job. That obviously sucks. I was out for a lot of last year and I know what it feels like to have no income. It’s super unfortunate and it sucks. I hope those guys put something else together or find something else to do somewhere else.

Have you ridden this bike? Do you know anything about it?
I haven’t ridden it. The team alone is proven, they’ve won races just this year, and the KTM as a whole, they’ve won titles and races. There’s no worries about that. For the big picture for me, it probably wasn’t the smartest thing to get out there today. Maybe I shouldn’t make my very first day on the bike in front of media. But then once I saw the guys get out there, it made me want to get out there a do a couple of laps. I think for me, it’s better to take it at a slower pace. But physically, I’m good. I’ve ridden since outdoors, I just haven't ridden this bike.

So where are you going to be riding. You’ve spent many years at the GOAT Farm. I’m hearing some rumors about that place [note: a team might be renting or buying it for their exclusive use]. Do you know where you’re going to ride?
I’m actually Justin Bogle’s roommate. I’ll be living at his house now. [Laughs]

You’re an Okee now?
[Laughs] No. I’ll be in Florida, somewhere. I know that. There are a lot of things unknown right now. But I know I’ll be in Florida. I wish I had more answers for you. I know I have a blister on my finger from golfing. That’s what I’m doing now. Do you want to talk about that? Pretty much all I have going right now.

This all worked out now. There had to be some dark times for you in 2020. Had to be times you didn’t think it would work out like this.
You’re preaching to the choir. I’m sitting there at home thinking about providing for my family. The path I took to get here was stressful. My wife would be the first person to tell you I’m not a stressed out person. I don’t believe in stressing out over things I can’t change. In my gut I knew this is what I needed to do and where I needed to be. It was just one of those things that needed time to come together. I’d say dark times is a good way to put it.

Did you have another plan?
A plan B, C, and D, yeah I had those.

Like, other teams or just not even racing anymore?
More like, maybe I do it myself. I had things lined up, maybe I just go racing myself.

So you were definitely going to keep racing?
I was definitely going racing. Maybe not the way I wanted to, but I was going racing. Because I truthfully wouldn’t be okay with stepping away right now. I feel like I have a lot to prove, I can be competitive, and I can battle with the best guys. I just don’t want to be in this position ever again. I will do everything in my power to be ready and to perform to the best of my ability. Not just for me but for my wife and my little one. I don’t want to stress about putting food on the table. Most people don’t realize that when things stop going well, it’s a reality check. I would prefer to never be in this position ever again, and I’m going to do everything in my power to make sure it doesn’t happen.

Listen to the full interview with Savatgy in the latest episode of the Racer X Exhaust Podcast (the interview starts around the 41:41 mark).