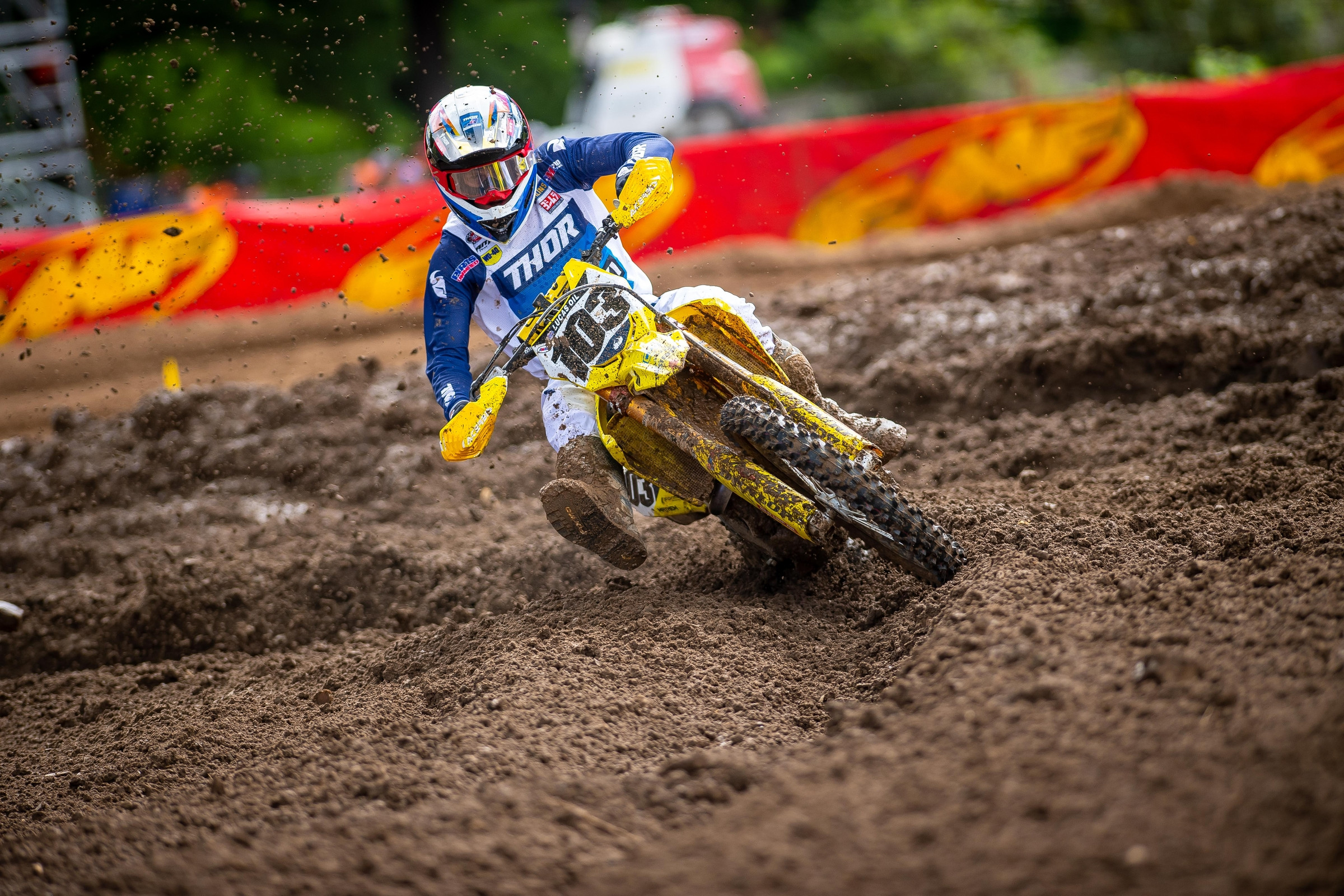 Mitchell Harrison is riding well as a replacement rider with Monster Energy/Pro Circuit Kawasaki. He was hovering around top-five speed at the opener, only to have a late-race stall in moto one ruin his result. He quietly put in an even stronger run last week, going 6-10 for seventh overall. His second moto was actually the most impressive. He was in 22nd place on lap one, forcing him to make his way through the field on a track that was biting more guys than a swarm of hungry mosquitoes. Who thinks Harrison will break into the top five at Ironman? –Aaron Hansel

Gared Steinke’s official result from the weekend was a 17th via 10-29 moto scores, but “Stank Dog” was running 16th in moto two with three laps to go when his engine let go, resulting in a DNF. Earlier this week the 30-year-old told us he’s feeling the best he ever has, and is planning on trying to make it to every remaining national. Stank is one of the most colorful characters in the sport, so seeing him at more races and running up front is never a bad thing. We’ll see if he keeps it up at Ironman this weekend. -Hansel

The last time Jeremy Martin won an overall was at Thunder Valley in June 2018. Since then, the gate has dropped on 23 nationals, but Martin missed nearly all of them with a bad back injury. It didn’t take long for Martin to find some familiar turf outdoors—the center of the podium. He’s six points back of series leader Dylan Ferrandis, and while Ferrandis is going fast, a strong, healthy Martin could set up a great championship fight between the two. If the two-time 250 Class Champion can get another win this weekend it’s definitely going to get some serious buzz going. –Hansel

An Even Longer Time Coming

As long as it’s been since Jeremy Martin won an overall, it’s been even longer since his older brother, Alex, has won a moto. Before Saturday, Alex hadn’t crossed the line in first since winning the first moto at Thunder Valley in 2017, and he hadn’t ever done it with his current team, JGRMX/Yoshimura Suzuki. In fact, nobody had won a 250 moto on a Suzuki since Ryan Dungey did it at Washougal way back in 2009! That all changed at round two, when Martin went 7-1 for third overall. Alex has been fast in all four motos this year, and says he’s much more comfortable in his second year on the RM-Z250. Will we see more yellow up front in the weeks to come? –Hansel

Speaking of yellow up front, how about Max Anstie? The Twisted Tea/HEP Motorsports Suzuki rider put in a hell of a ride in the second 450 moto, leading 11 of 15 laps before eventually giving up spots to Zach Osborne and Marvin Musquin. Even so, it was a great performance from the Brit, especially considering he’s coming off a major Achilles injury. If he gets another good start at Ironman will he be able to hang on for a moto win? If so it’d be a huge step for both him, and his team. -Hansel

Eli Tomac is no stranger to adversity. In fact, it seems like most of his titles have come in the face of it, but he may be facing the biggest championship challenge of his career this season considering the way last Saturday played out for the Monster Energy Kawasaki rider. In both motos Tomac found himself unable to finish, thanks to mechanical failures, which relegated him to 9-24 scores and 16th overall. Now, with just two rounds in the books, and a truncated season to boot, Tomac finds himself in seventh place, 40 points back of points leader Osborne. There’s plenty of time to get back in it, but Tomac needs to start getting some wins. Of course, the three-time and defending 450 National Motocross Champion is very capable of doing that. Who is looking forward to some Tomac “Beast Mode” charges as he hunkers down and tries to make up points? –Hansel

After missing the one and only A practice last week due to sudden bike problems, it seems weird to call Osborne’s season flawless, but in terms of overall wins, he’s exactly that. The Rockstar Energy Husqvarna Factory Racing rider has been fantastic so far this season, and even when things haven’t gone his way he still managed to turn it into a win. The season is still very young, but so far things seem to be going Osborne’s way, not unlike in 2017 when he won the 250 Class title. Remember when his bike was smoking like a chimney at Spring Creek and he still ended up on the podium? –Hansel

Two 450 class noobs have already shown they can run the pace. Chase Sexton was hella good at the opener at Loretta’s, and the HRC Honda rider spent some more testing time in California to get even more comfortable for round two. The mud spoiled it, but expect more fireworks from the #23 this weekend. Adam Cianciarulo crashed out of Loretta Lynn’s 1 while leading moto two, and made consistency his goal for round two. Mission accomplished, as he went 3-5 for second overall. These guys have the speed, and should be in the leading mix this weekend. –Jason Weigandt

The two Loretta’s races were defined by the weather, with the opener barely escaping with decent conditions, and the second-round succumbing to full mud conditions. No rest for the weary here, as the short history of the Ironman National in Indiana has featured plenty of mud, and the typical summertime thunderstorms are in the forecast this weekend. Even hurricane remnants could impact the event! But, when you’re tracking thunderstorms or the remains of a hurricane, there’s a chance it all misses, and the track ends up dry. In other words: keep an eye on the radar as much as the racetrack. -Weigandt

After the first motos were complete last week, things were looking pretty good for Justin Barcia and RJ Hampshire. Barcia had just dominated the first 450 moto by nearly a minute despite a small crash, and Hampshire had withstood immense pressure from Dylan Ferrandis to break through for a win in the first 250 moto. It wasn’t just a mud thing, either, because both had put in strong rides the week prior. Well, we all know what happened in moto two. Both Hampshire and Barcia were putting in strong, come-from-behind rides until their bikes let go, ruining what could have been outstanding overall results. How will they respond at round three? -Hansel