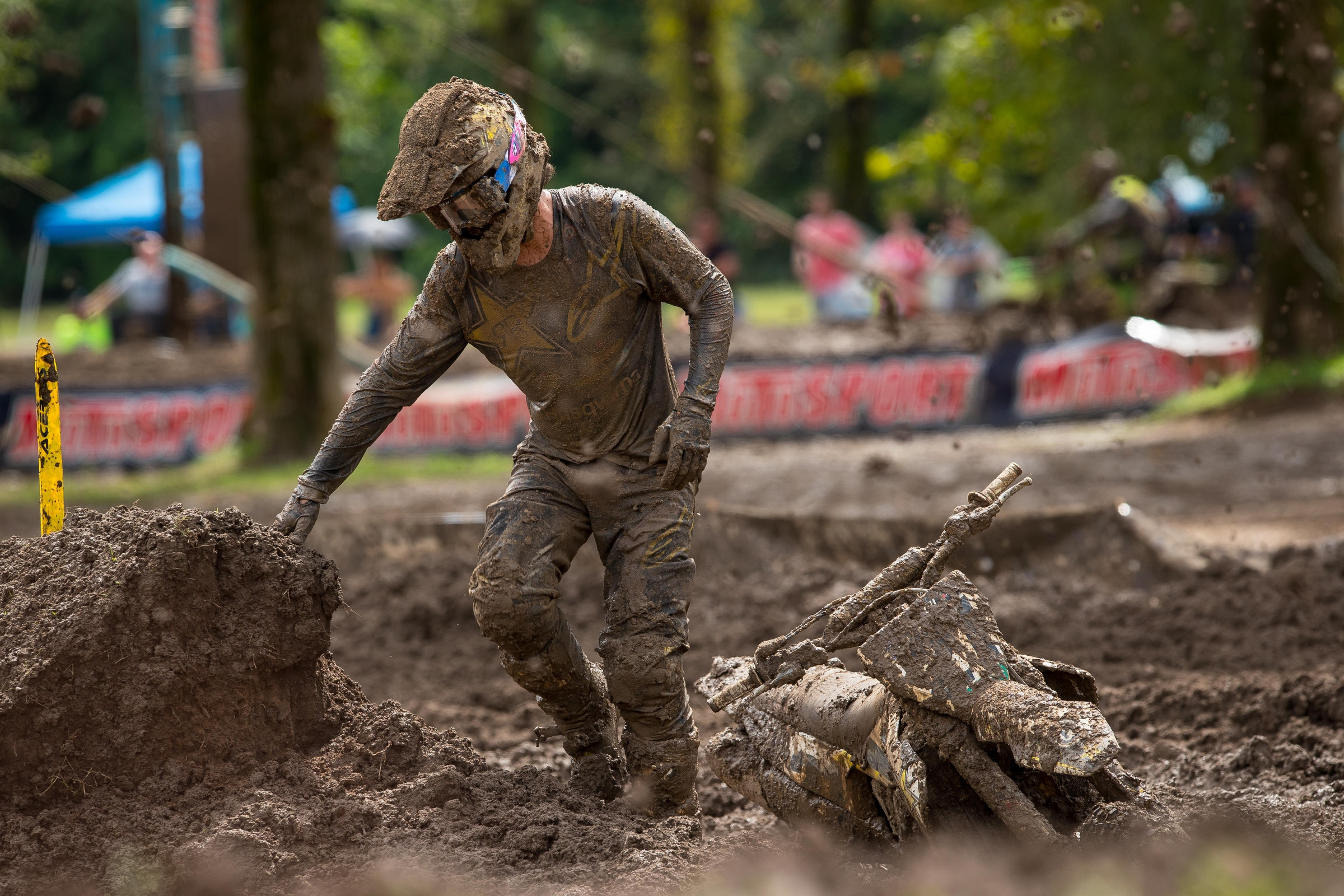 The 2020 Lucas Oil AMA Pro Motocross Championship had its first ever back-to-back races at the same location in the same season as the second round returned to Loretta Lynn’s Ranch over the weekend. As such, we fired off questions the way of long-time pro Jason Thomas to get his insight on the key takeaways from everything that happened in the muddy conditions.

Do you take anything out of these results in a mud race?

Yes, you take pounds of mud from the facility and transfer to your rental car, hotel room, and gear bag. Seriously, though, I don’t think you can deduce much from a full mudder like Saturday. Most of the field isn’t even really racing. They can’t see where they are going, they have probably fallen multiple times and might have even stopped to see their mechanic. Trying to learn anything about speed or fitness in those conditions is foolish. Hopefully the first “real” indicator in normal conditions will be this Saturday. Loretta Lynn’s National 1 could be considered somewhat normal but the heavy rains on Friday made the track a bit unique. I still think we have a few trends yet to develop.

Still 14 motos to go, but seriously, is there reason to worry for the Eli Tomac camp being down 40 points?

Yes, anytime you are 40 points down and your goal is the championship, there is significant reason to worry. It’s certainly not beyond repair, but to think they aren’t worried would be silly. I am more concerned with the fact that we haven’t seen superman Eli yet. His second moto ride at LL1 was solid, for sure, but he hasn’t been notably faster than the field at really any point this season. That’s not something we would have said in past years after two rounds. Maybe Ironman is the right time to turn the tide for the #1.

Will Zacho ever lose a race again outside of a GNCC?

According to Staging Area (Thursday’s here on RacerXOnline.com), no, he will not.

(This question is not a typo) Do you not agree that you don't not give Alex Martin the credit he deserves, as per Steve Matthes' theory, or not?

Steve is a well-known manipulator of the narrative. His intentional wording of this question on a Twitter poll was a thinly-veiled attempt to confuse the polling public.

As for A-Mart, he is doing awesome! The trouble comes in any time we discuss Troll Train because Steve will only speak in absolutes. If you don't say that the championship being a virtual lock for A-Mart, you are instantly cast into hater-land. Alex Martin is a success story. He has gone from privateer hero to factory rider and race winner. I am not sure how Steve could think that anyone, including myself, would discount that. Fake news is not something to take lightly and I will vigorously defend myself against such deliberate, slanderous notions.

Talk about the balance between "this team needs to give the rider a bike that's reliable in the mud" and "this rider needs to be gentler on his bike in the mud." This applies to like half of the field since so many bikes were blowing up.

This is always going to rely on both rider and team working together. Teams can de-tune the bike and help but if the rider revs the bike to 14,000 RPM for a majority of the moto, it’s still going to overheat and fail. The rider has to be conscious of the situation and ride a gear higher, work to carry momentum, and keep RPMs low. The tough part for the team is finding a setting that still gives enough power to be competitive but also minimizes chances of engine failure. Even tougher, the teams that might be down on horsepower and torque are going to be put under even more pressure. The fastest bikes can take less risk and still be competitive while those behind the proverbial eight ball will have to take more chances.

Get more in depth about laying off the clutch and not revving the bike in a muddy moto. When you get into a deep spot, or a turn with no momentum, or you're trying to make a pass (which could save your vision) how do you play it?

It has to be a calculated approach. There are times when pushing the engine, a bit makes sense (passing, the start, etc.). When in a drier area or down a straight away, though, allow the bike to catch a breather. Simply shifting up and lowering the RPM can do wonders. Also, riders can help by jumping and, believe it or not, casing a few doubles on purpose. That abrupt landing will remove loose mud, get more air flow into the radiators, and make the bike more agile due to less weight.

As for the clutch, this is one that many riders struggle with. So many riders are habitual clutch abusers. Muddy tracks and long ruts only exacerbate that clutch reliance. When the bike is under duress, engaging the clutch just adds to the problem. The RPM goes up and the heat of the engine along with it. Riding in the mud is more similar to riding on very slippery, hard-packed conditions than you might think. Small inputs on the throttle, brakes, and clutch are very important. The goal is to let the bike flow and go where it chooses without having to fight against its own momentum. Anytime the clutch is engaged, that momentum is momentarily disrupted. Staying off the clutch is ideal but not easy. In muddy conditions, the bike is wanting to veer all over the track and the clutch can help you stay upright but when things are stable and the RPM range is acceptable, let it roll! The clutch is used as a crutch far too often. Ken Roczen’s style is a great example of how to go fast without high RPM or abusing the motorcycle.

Fantasy winners and killers on a crazy weekend. Please elaborate on fantasy life during a mud race.

Picking a PulpMX Fantasy team for a mud race is one of the more stressful dynamics that this life has to offer. It’s already hard enough to guess if a rider is going to do well on a given day. Now I have to rate the reliability of their motorcycle, the competency of their mechanic, their motivation to fight through a mud fest, their budget (extra motors), and last but not least, how well they can actually ride mud. I changed my team approximately 742 times on Saturday morning. Every time I thought I was set; doubt would creep in. I would poke holes in my own strategy. It was a mentally draining morning that there is really no answer for. Even as 1 p.m. local arrived, I was still unsure. Put succinctly, it’s a guessing game. Will a rider’s bike finish that last lap while it’s smoking like Hugh Hefner's evening wear? All you can really do is make educated guesses as to who is most likely to fight through the adversity on reliable equipment. Given that, you would think three-time defending champ Eli Tomac is a good pick on a factory Kawasaki KX450, right?  HAHAHA, the joke is on you. There is absolutely no way to know what will happen in a mud race!

Some of the big winners of the day were unlikely heroes. Lance Kobusch and Ezra Hastings are not household names but they both scored 100 points in the 250 class. Stilez Robertson bounced back from a tough opener to rack up 94 points at round two. In fact, you would have to drop down to Jeremy Martin, the 13th highest scorer, before you enter names that are immediately familiar. That’s what mud does to a results column.

For the 450s, Justin Rodbell was my gamble of the day. Ten minutes before lockout, I was pacing back and forth, asking unanswerable questions to an empty house. “Can Rodbell finish? He’s on the same bike as Alex Ray and that doesn’t go well. A-Ray rides his bike like he hates it, though. Don’t let A-Ray effect your psyche. Focus!” That’s a snippet of the chaos that went on Saturday mid-morning.

The two highest pick trends were Benny Bloss and Adam Cianciarulo. Unfortunately for some, their results were very different. Benny had a tough day with crashes and mechanical gremlins while AC put in a solid overall podium day. The ugly part is that Ironman will only make things worse. AC9 will go to all-star status, limiting his upside. Benny’s terrible day will push his handicap even higher going into arguably his best track. Fantasy picks have nasty cycles, and this is a perfect example. If you get on the wrong side of the weekly luck, it can take weeks to even out. Not only do you suffer through a bad day, you are then faced with the bad juju rolling into the next weekend.