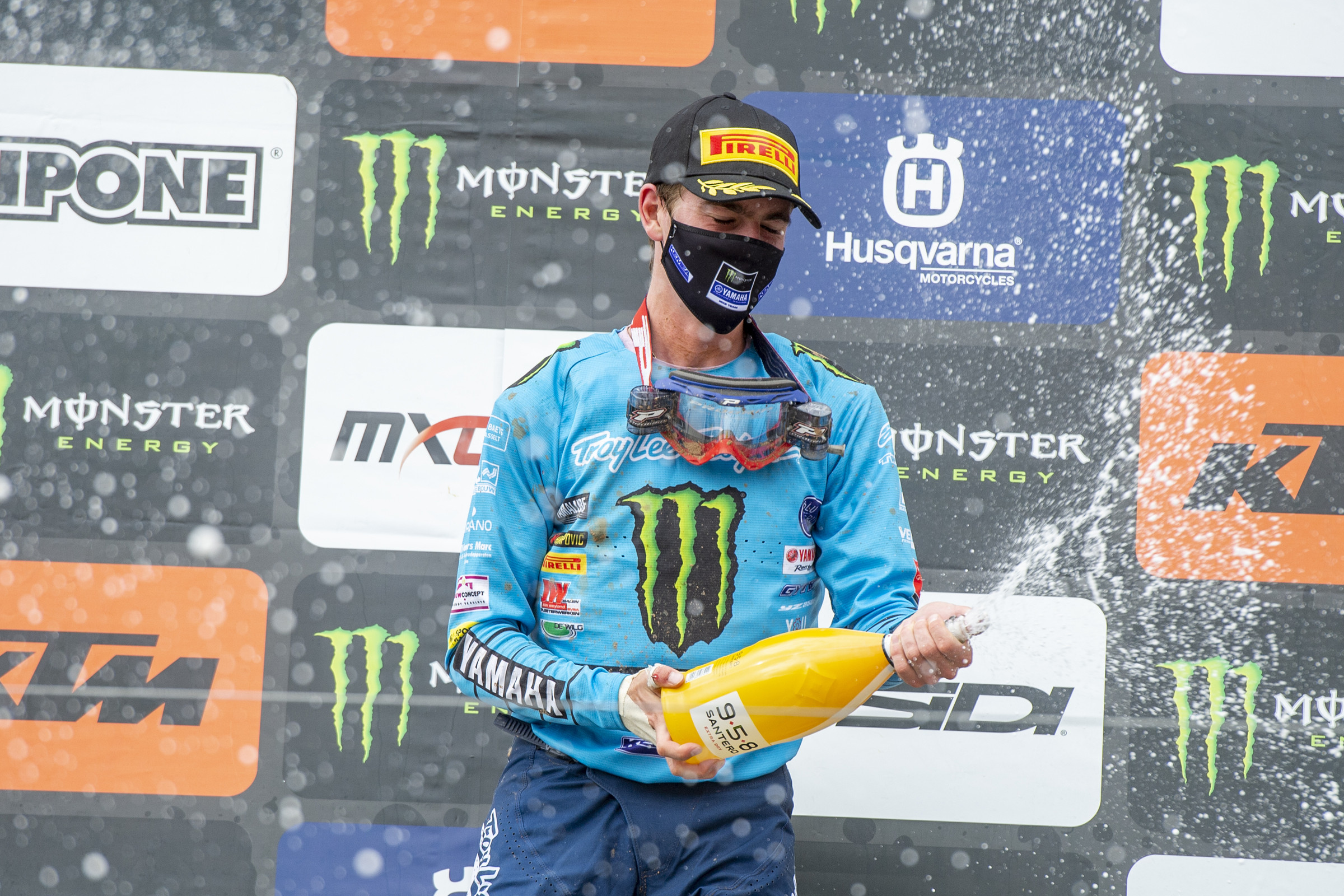 A few weeks prior to what was to be the raising of the curtain on the 2020 FIM Motocross World Championship at the MXGP of Great Britain last March, then 19 year-old Jago Geerts contemplated what he wanted from and out of the MX2 World Championship he’d be contending in for the Belgium-based Monster Energy Yamaha Factory MX2 team.

“I’m looking forward to the 2020 season,” pointed out the native of Balen, Belgium who ran to a remarkable third overall in the 2019 MX2 world title chase. “I hope to have an injury free season and hopefully some good results! For 2020 my goal is again to fight for the overall podium in the MX2 class. If everything goes well, I might have a chance to become world champion. But that’s still far away now. I just want to have a good winter and then we will see.”

And Jago Geerts did manage to have a good winter. And he enjoyed the first two rounds of the 2020 World Championship, as well, where he won a moto and placed runner-up at both the MXGP of Great Britain and the MXGP of The Netherlands before the COVID-19 virus cast its long shadow over the sport and sent everyone back home to be locked down.

“I’m pretty bored at the moment,” Geerts said during the dark days of his Belgian lockdown. “I can’t do much physical training. We have been working in the garden of my grandpa for a couple of days now.” When the season ultimately resumed with the post-lockdown MXGP of Latvia on August 9, 2020, Geerts was prepared, racing to 7-1 moto scores and placing second overall to Red Bull KTM Factory Racing competitor Tom Vialle of France. Thus far into the ’20 season, and as odd as the season has truly become, a two-horse race has developed between Vialle and Geerts. Five Grands Prix and counting (including the three Latvian events), Vialle has gone 6-1-2-1-1-2-4-4-1-2 to Geerts’ 1-4-1-7-16-1-1-1-2-1, the two riders now separated by a mere eight points in the championship conflict.

“It was a good week in Latvia last week, so now I’m just having something of an easy week before we really begin preparing for the next three in Italy in three weeks,” offered Geerts who won the last GP at Kegums on August 16. “Normally, we were supposed to go to Turkey, but that race was just canceled, and they changed that race over for Italy. I think it’s a good decision because it’s difficult to travel to Turkey right now and the situation is not so good, so it’s better to go to Italy.

“Latvia was really nice,” furthered Geerts. “It was the first time we did the three races in one week. It was all physically demanding, but I liked it a lot. They changed the track for the last race there a little bit and that was really nice. It was a good week for me. The first heat of the first round at Latvia I had some problems, but after that everything was really good, and I won the last two rounds there and I was happy with that. My speed was really good and I’m feeling good on the bike and everything was good. I felt really good on the track and I was happy with that. I also got two holeshots in Latvia and the last time that happened was a long time ago, so that’s something good and positive to take to the next race.”

As word came down from the Principality of Monaco last week, the MXGP of Turkey set for Afyonkarahisar on September 6 was cancelled, the MXGP continental circus immediately directed to Italy where GPs will run at the Faenza, Mantova, and Trentino circuit throughout the months September, October, and November. As odd and compressed and ever-changing as it all has been, Geerts is just plain stoked to be back racing, never mind where and when,

“Yeah, it’s really nice that we can finally start again,” he said. “It was a difficult time the last four months, but everything is starting again and it’s just really nice that the sport can get started back up and get going again. Next, we will go to Italy and I like it there. The first three rounds will be at Faenza and that’s a good track for me. The track really looks really nice and really natural and I think it will be really good for me.”

Straight off the last two Grand Prix victories in Latvia where he fought fiercely with Vialle, Geerts is quite aware that the struggle for the Federation Internationale de Motocyclisme MX2 gold medal will likely be between the two Europeans.

“Before the season started, for sure Tom was my main competitor,” said Geerts. “At the first two rounds we were already really competitive with one another. I won the first round at Great Britain and he won the second round at Valkenswaard. We both already knew it would be a really tight title between us. The last three rounds at Latvia were really close between us, so I think it’ll be him and I fighting for the title for the rest of the season. Next, we will go to Italy. We will see.”

When Jago Geerts speaks and makes observations on all things motocross, it’s remarkable (at least to me) how similar he acts and sounds like full-on motocross legend Stefan Everts. Also, a Belgian, Everts, like Roger De Coster, Harry Everts, Gaston Rahier, Joel Smets and many others who came before, all make up a remarkable motocross history punctuated by more than 50 FIM Motocross World Championships. Taking all this into account, Geerts is somewhat surprised a Belgian racer has not won a world title since Steve Ramon got the job done back in 2007.

“I watch some of the old Belgian races on YouTube from the 1980s and 1990s and I know some things about it, but not that much,” explained Geerts, whose father once spun wrenches for Belgian MXGP star Marnicq Bervoets. “Belgium has always had really good riders and a lot of World Champions. It was a really long time ago, but really nice history for Belgium. The last few years we haven’t had a World Champion, but I will do everything this year to get on the top step of the podium and get Belgium another World Championship.”

And of potentially racing in the United States of America one day in the future, a potential reality that shadowed the charismatic and supremely talented Everts throughout his Grand Prix career?

“I think I want to do some rounds there," Geerts says. "That would be nice just to try it, but not really to come over and race there. Just to do one or two rounds would be nice to try. I could race against some different riders and it would be just something totally different and exciting to do. And supercross is really different from the outdoors, so for us I think it would be a little bit more difficult because in America there are a lot of practice tracks and all of the kids grow up riding on the supercross tracks. Here in Europe, there is not so much of that. Supercross is not so popular here and there are not so many practice tracks. For us, I think supercross is difficult, but I like to watch the races because it is always exciting. Like I said, it’s just something really different than motocross.”

And so, it will now be off to Italy in a few weeks’ time where Geerts of the Monster Energy Yamaha team will cross swords with Tom Vialle of the Red Bull KTM contingent in their world war for MX2 global supremacy. Geerts’ battle marching forward?

“I just want to look at it all race by race,” he said, plan in hand. “I don’t want to make too many mistakes at a race like I did in the first round at Kegums. I just want to try and be consistent and get god starts and ride good, so that’s the main goal for me. We will see. I hope to get some more podiums and wins and to try and fight for the title, but it’s still a long season and anything can happen, and I just want to stay consistent during the upcoming rounds.

“And for sure, I want to win a world title,” he tossed in. “That would be really nice for me to achieve. A world title would be really nice and that’s one of my goals for the rest of my career and I will do everything I can to achieve it. I feel very good and I feel good on the bike and my physical condition is good and I just love to be racing. We went a long time without racing and it’s just fun now that everything is starting again. That’s the main thing.”