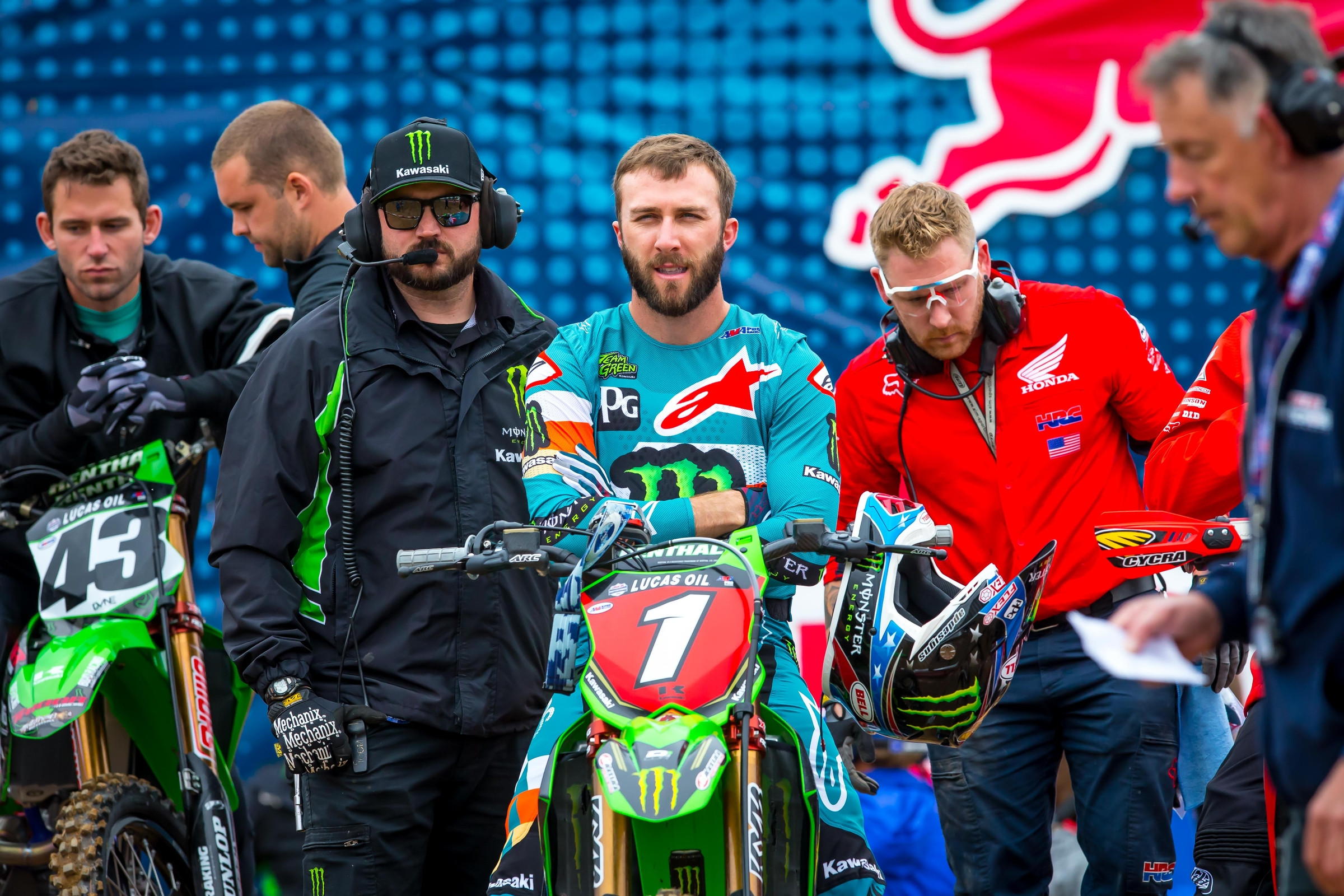 Loretta Lynn’s Ranch will host an AMA Pro Motocross race for the first time ever this coming weekend as it kicks off the 2020 Lucas Oil AMA Pro Motocross Championship. The tight and twisty circuit nestled an hour outside of Nashville, Tennessee has hosted the AMA Amateur Motocross National Championship for 39 years running making it the place of many successes and heartbreaks for nearly every rider currently racing Pro Motocross.

This unique opportunity to race at Loretta Lynn’s in 2020 means the first time that riders in the pro paddock will return to the Ranch since their final year racing the AMA Amateur National Championship. For some, it will be a welcomed return, as, after all, most pros probably also had success as amateurs. Still, there are probably others looking to keep those memories behind them, as Loretta’s can be the cause of some heartbreak!

For most of these athletes, though, Loretta’s is more than just a racetrack. This is where they grew up, so this is their homecoming.  With that in mind, we reached out to several riders to hear their thoughts on returning to Loretta Lynn’s this year.

I am looking forward to going back as a pro, but I also look forward to going back as a vet rider someday. I’m interested to see what they will do to open up the track for us and that could be the key to how the experience goes. I think it’s just the vibe and the history. I mean in all reality it’s not the most pleasant of places [Laughs], but it holds so much of motocross and my personal history you have to love it. It’s a special place.

Growing up I wasn’t allowed to participate in any of the shenanigans. Loretta’s was a lot of stress and pressure for me and the best memories were when it was over!

I would say my favorite is my only win there. I had a great year in 2004 winning the Junior World Championship a few weeks before and then winning there was awesome. I won the 85cc 14-15 and I should’ve won Supermini, but I went 1-9-1 after a fall in the second moto.

Probably Josh Hill. I feel like we raced a lot as younger kids and he would always beat me at Loretta’s but not many other places. He was so on point there every year.

Excited for the ranch this weekend! This is my one and only title from there so if any kids out there had a rough week last week just remember that it doesn’t define you! Remember why you started riding—for fun! That’s still what it’s all about 25 years later for me! @guybmoto 📸 First snack pack comment wins a signed jersey. Go!

There are so many memories from racing Loretta’s as an amateur. It will be great just to be back in the presence of the Ranch and race the proving grounds of our sport.

I look forward to the track itself and seeing how it feels compared to 10 years ago.

My favorite or most interesting off-track memory would be when Brett Downey and I entered the talent show one year. I just remember practicing our unicycle routine all afternoon for the show. I’m not sure how we finished up! [Laughs]

The best on track memory is your first title. I believe mine was the 65cc 10-11 age group.

We had a few rivalries through the years. [Ian] Trettel, [Justin] Barcia, [Blake] Baggett, [Jason] Anderson, and [Shawn] Rife are a few that come to mind.

It definitely feels special to be going back to Loretta’s. I have great memories of having so much fun racing and hanging out with family and friends as a kid. I’m looking forward to making some more memories at such a special racetrack. I didn’t think I would be getting to race at Loretta’s again so soon.

I can remember as a kid just running around the massive property with friends fishing and riding my bicycle. It was honestly like a big vacation, and then you do some racing.

I would say my best memory is winning my first championship there. It was so special, probably the best feeling you could have as a kid.

Honestly, the biggest rivalries over the years at the Ranch are pretty much the same fast guys I’m battling with now. We all grew up racing together and we were a fast group of kids. It was never easy to win at that level as a kid.

Growing up from 50s to 450s at Loretta’s was awesome. Enjoying time in the creek, time with your friends, and being there with all the best competition in the U.S. each and every year was awesome.

In 2004, I moved up to big bikes and in my first Schoolboy moto, getting the holeshot and leading from start to finish stands out the most to me because that’s when I believe my professional career got kick started.

Over the years racing there I’d say my age group had a lot of great competition, but Josh Hill was the guy who won the most, so I’d say him the most over the others.

It's a unique situation. It's obviously special for me because I've had a lot of good memories there as a kid. When I left Loretta's after racing for the last time, when I knew I was going to go pro the year after, I never thought I'd come back and have the chance to race there again so that's definitely special and I'm looking forward to making the best of it.

I always remember at Loretta's getting funnel cakes and snow cones and eating terribly bad between motos. As a kid, any kind of diet just isn't on your radar. I just remember running around with my friends, most of the time playing in the creek, jumping off the cliff back in the day, but mostly the snow cones and funnel cakes.

In 2007, I believe I was racing the 85 (7-11) class. I broke my collarbone before World Mini and raced it anyway and got my butt kicked, so when I was able to win both championships [at Loretta’s] that year in the stock and mod classes as a 10-year-old, it was huge for me. I just remember being so excited because I had gotten beaten so badly at World Mini and then come out, and I was so small too, so I wasn't necessarily the favorite that year, at least not in my mind.

I never really had one specific guy that was my biggest rival, it seemed like every year there was a different guy that was stepping up. I had a lot of really good battles with Justin Hill, Cooper Webb, Jesse Masterpool, and yeah, just a lot of guys I'm still racing today. So, it's pretty cool to see those guys at the starting line now and just remembering when you were both little kids going off of the starting gate at Loretta's.

I’m very excited to go back to the Ranch as a pro! All the memories made there as a kid racing with my family are so special to me and now being able to go back and race there as a professional will be really cool. The track at Loretta’s is very rutted and technical, which are my favorite conditions, so I’m looking forward to that. I’m also looking forward to going back and reliving some of my childhood, being at a place that was a kickstart to my career.

My favorite off-track memories at the Ranch were running around the pits with my buddies when I was younger. I also enjoyed fishing a lot when I was there. When someone couldn’t find me at Loretta’s, I would most likely be in the creek or one of the ponds on the property fishing.

The best on-track memories are the two championships I have there in 85 (9-11) stock class and also the last time I was there as an amateur in the Open Pro Sport class.

After all the years and different classes I’ve raced at Loretta’s, it's hard to really pinpoint a specific rider. Toward the end of racing at the Ranch, Austin Forkner and I had a lot of close racing and did go head to head the last three years or so.

It’ll be cool to come back to Loretta’s. I have a lot of memories throughout the years racing as an amateur and kind of using it as a vacation. It’ll be different this year showing up as a pro with a lot of different feelings but hopefully it brings back some good memories. I'm really just looking forward to getting back to racing. It’s been a while for me and it’s special being that the first round is at Loretta’s for the first time ever!

Growing up I wasn’t very fast, so it wasn’t like I was showing up to battle for wins. [Laughs] A lot of time spent on golf carts and that ice cream shack on top of the hill!

Best memory for me would be my last year there, 2014. Looking back on it now, I realize how crazy that week was. I’ve never gone a full week where absolutely nothing went wrong, besides that week. No one expected me to even win a moto, so it made that year even more special.

Like I said before, I wasn’t the fastest growing up, so I got beat a lot by a lot of people. [Laughs] I got second behind Cooper [Webb] in 2002, which was my first year there. After that I didn’t have a podium again until I believe that last year. I’d say AC [Adam Cianciarulo] beat me in just about every moto as an amateur!

You know, I’ve had a lot of ups and downs there. Probably in 2014, the first time I ever got on the podium. I think I was on the podium five out of six motos, and that was a really good year for me, and I brought a lot of good memories home that year. There’s nothing like getting on the podium at Loretta’s, it’s just a different feeling.

"Loretta’s is always an exciting time of the year, it’s like no other race and I’ve been lucky enough to have made some amazing memories with my family and friends! Goodluck to all the rippers out there this week 💪🏼"

Loretta’s is always an exciting time of the year, it’s like no other race and I’ve been lucky enough to have made some amazing memories with my family and friends! Goodluck to all the rippers out there this week 💪🏼 . Here’s a few photos from the ranch.