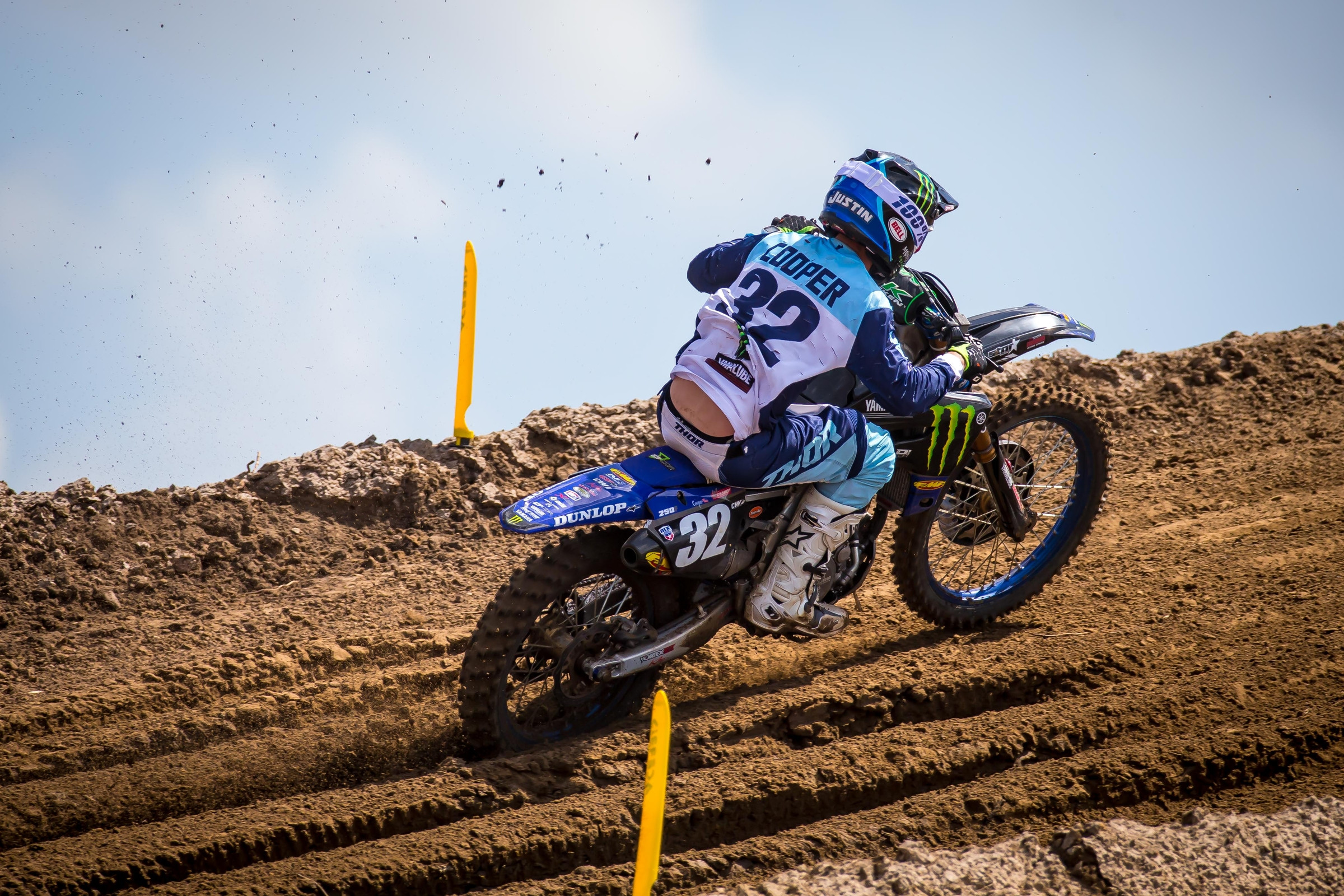 High consistency is now commonly associated with Justin Cooper of the Monster Energy/Star Racing Yamaha team. In the last three 250cc racing seasons Cooper has competed in full-time—2018 250 Class (Lucas Oil AMA Pro Motocross Championship), 2019 250SX East Region and 250 Class and 2020 250SX West Region—he has finished either second or third overall in the points standings. Off a runner-up finish to Monster Energy/Star Racing Yamaha teammate Dylan Ferrandis in the recently run 2020 250SX West Region of Monster Energy AMA Supercross, the young man out of Cold Spring Harbor, New York, will now turn his sights to this forthcoming Saturday and upon Hurricane Mills, Tennessee, and the curtain-opening round of the Lucas Oil AMA Pro Motocross Championship. A championship Cooper has fully been fixated upon, the time has now come to pack up the gear bag and head out on a two-month road trip which will take him to Tennessee, Washington, Indiana, Michigan, Florida, and Southern California.

“I’ve just been doing some riding and been getting ready to go racing this Saturday,” offered Cooper this Monday afternoon from his home in the Inland Empire. “It’s coming up pretty quick now. It was a long break and now it’s this coming weekend, so we’re just getting the final preparation in and heading over that way. We’ve got to race at some point, and everyone threw something together and I think we’re all just along for the ride now.

“Everything is looking good,” continued Cooper who recorded an overall podium finish in nine of the 12 nationals in 2019. “I’m coming back from a little bit of an injury, but it was a pretty short injury, so it has come along well and we’re ready to go racing. I actually got hurt the first week after the last supercross at Salt Lake out at Glen Helen. I went down there and hit a rock and it kind of upset the bike and it threw me down. I learned from that and we’re pretty much ready to go now. We have less than a week left and I’m just getting some last-minute riding in and getting ready to go do battle.”

[Note: Racer X has heard that Cooper suffered a boxer’s fracture in his hand, which is an injury many riders are able to continue racing and riding through.]

Despite not having been lined up behind a starting gate since it clanked into Salt Lake City dirt virtually two months ago, Cooper is confident he’s in possession of everything required to run up front in what will be an abbreviated nine-race championship beginning on Saturday and wrapping up at Pala Raceway in Pala, California, on October 10.

“We’re ready,” he said. “We did a lot of testing for all the supercross races we ran, and we’ve really been over everything. The bike and the fitness is good. I’m real happy with the bike right now. Things are going good, and like I said, we’re just making the last few adjustments and heading over there.

“You know looking back to everything there, Salt Lake, It was weird. It was definitely way different than I anticipated. It went good for me, but a little bit up and down and I wish my results were a little bit better in the mains, but I seemed to do really well in the heat races. But yeah, the focus is now totally on Tennessee and the outdoors now. It has been for a while. I’m just looking to come out swinging there.

Perhaps putting a spring in his Alpinestars boot step will be the fact that Justin Cooper will be showing up for this title brawl with a newly signed contract that will see him racing for the Monster Energy/Star Racing Yamaha team for as long as he’s a 250cc rider.

“Yeah, I just signed a new deal with Yamaha,” he said, somewhat out of the blue. “I’ll basically be with them my entire 250 career. I think I signed for the next three to three and a half years with them. Basically, I’m with Yamaha until I’m done with the 250 and then from there, we’ll see what’s next. But yeah, I could stay with them for the rest of my career. I feel like they’re a good team and they put a lot of work in like I do and in order to succeed, I feel like that’s what I need in this class.”

His Loretta Lynn’s competition resume beginning in 2011 when he first showed up to race the AMA Amateur National Championship in the 85cc 12-14 Stock and Modified classes, Cooper has fared well in Hurricane Mills, Tennessee, earning two amateur titles in both 2015 and 2017, and the coveted AMA Nicky Hayden Amateur Horizon Award in that final year. With this year’s pro season starting on the same track, Cooper kept a close eye on this week’s live webcast from the venue.

“Yes, I have checked out a few motos from Loretta Lynn’s thus week,” he said. “I watched some of the racing from there to get a view of the track for what we might be in for when we go race there this weekend. It was always a good time at Loretta’s and it’ll definitely be different going back there here in a few days because it’ll be an entirely different atmosphere with a pro race going on there.”

And his thoughts on the aforementioned Trans-American schedule the Lucas Oil AMA Pro Motocross Championship will embark upon when packing up the plantation and rolling out of Music City USA?

“I think it’s good,” said Cooper. “We’re getting a good variety of tracks, so that’s good. I wish Southwick was in there because that’s always a good one. I mean any racing is good, so to have those tracks on the schedule is good because they’re definitely good ones and I’m glad to just be going racing at this point. Bring it on. I mean it’s always going to be competitive at this level. You have both supercross coasts coming together and you’ve got everyone together in one class and it’s never easy and I don’t expect to be. I just have to trust the riding, the fitness, the training and give it all you’ve got. I’m going there to win. That’s the main goal. A title would be awesome. That’s definitely my dream, so I’m going to give it everything I have to get that done. It’s definitely going to be tough and that’s going to make it worth it in the long run. The plan is to just stay consistent through the whole series like I usually do and to try and limit the bad days to give myself the best chance I have to go out there and win. That’s definitely the goal and I’m looking forward to getting out there and giving it my best shot. It should be exciting to go back to Loretta’s for the first round. There is going to be a lot of hype around it, so we’ll start it all off and see what we can do. You have to take it slow. The championship is not won in a couple of races, it’s won through an entire period of time. For now, I’m just going to take it one race at a time and to put myself in that position to go after the title.”