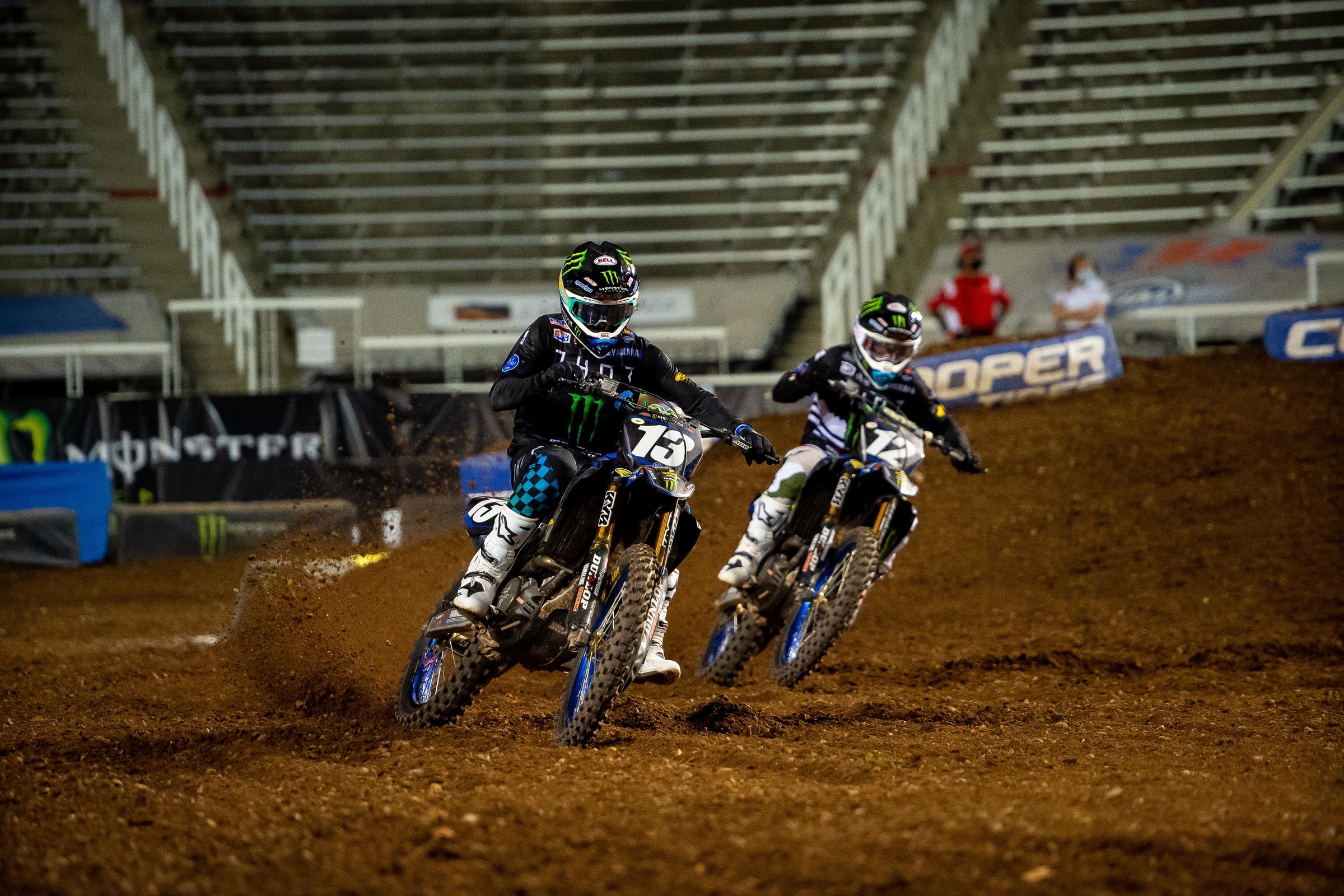 We know Chase Sexton is capable of winning races, he’s already won two this year, but what he hasn’t done is win since the championship resumed in Salt Lake City. Shane McElrath, on the other hand, has had no problem snagging wins—he’s done nothing but that so far in Rice-Eccles Stadium! And thanks to Sexton’s rough night on Wednesday, in which he crashed and ended up fourth, the two are now tied at 140 points apiece. One of the two will emerge with the red plate at the end of Sunday’s race. Will it be Sexton or McElrath? -Aaron Hansel

Although the results haven’t shown it, Pierce Brown has been very fast in the last two races. At SLC 1 he came from nearly dead last to finish fifth, and on Wednesday he was running fourth before he went down when Sexton crashed right in front of him. Again he found himself near the back of the pack, but charged up to tenth. It’s going to be interesting to see what Brown’s got in the tank if he ever finds himself up front and unobstructed. –Hansel

Had you told Zach Osborne before the gate dropped on Wednesday he was going to be on the podium, he probably would have been pumped. But after leading most of the race, only to give up spots to Cooper Webb and Eli Tomac at the very end, Osborne was, by his own admission, a little bummed. Even so, it was a fantastic ride from Osborne, and it showed he does in fact have the speed to run up front. Now that he’s got the experience of leading deep into a 450SX main event, will it help him seal the deal on Sunday? –Hansel

Whether or not you’re a fan of Cooper Webb, you absolutely cannot deny the fight inside him. He never, ever gives up! His stubborn ways were on full display on Wednesday too, when he wrestled a win away from Osborne and held off a charging Tomac to hang on for the win and inch three points closer to Tomac in the championship. He’s still staring down the barrel of a 29-point deficit, but don’t expect that to extinguish his inner fire. Can the defending champ go back-to-back? –Hansel

After Ken Roczen had a bit of an off night (for him, anyway) and finished fifth, Tomac now leads the championship by 13 points with five races remaining. It’s certainly not a huge margin, but it does give him the luxury of not necessarily having to push hard to make passes if Roczen is behind him. It’s unlikely Tomac will back things down at this point, but then again, he’s been chasing this championship for a long, long time and the last thing he wants to do is crash it away. Will his growing points lead translate to a more cautious Tomac from this point on? –Hansel

We are now heading towards our third race in eight days for both classes this Sunday. Many riders expressed that the two races a week wouldn't be too much before this all got started, but perhaps that feeling has changed. It's clear that some riders are struggling with altitude and the lack of recovery time between races can't be a positive for anyone looking to rapidly improve their fitness. Look for this weekend's race to be a tipping point for some between figuring it out or struggling more with the rapid race schedule. -Kellen Brauer

I'm not a meteorologist and most of the time when the forecast shows rain on a race day, it ends up being sunny and beautiful instead. But a quick glance at Sunday's forecast right now shows a 60 percent chance of rain with the lot of it expected to fall early Sunday morning with scattered showers throughout the afternoon. The first Sunday race was about as dry and dusty as you can imagine for supercross. Rain would be quite a U-turn this weekend. Hey, at least we'll finally get that moisture into the dirt that riders were desperately looking for last Sunday! -Brauer

Besides Osborne's terrific ride on Wednesday, fellow Rockstar Energy Husqvarna teammates Jason Anderson and Dean Wilson followed him home in fourth and sixth, respectively. All three riders looked particularly comfy in practice and qualifying on Wednesday with Anderson and Wilson both finding the top of the time sheets at one point or another. Clearly, the trio seem to have found their mojo for the Salt Lake City swing and any one of them could be a spoiler for Tomac, Roczen, and Webb moving forward. -Brauer

In case you didn't notice, the Monster Energy/Star Racing Yamaha YZ250F is a pretty darn quick machine. The running joke that the motor is bored out to a larger CC isn't anything new, but the actual difference in horsepower is certainly noticeable. Shane McElrath has been fastest in qualifying for both races thus far, and even ran a quicker lap time than everyone in the 450SX class side from Blake Baggett and Jason Anderson. Then he and teammate Colt Nichols ran 1-2 in the main. Is the power-sapping altitude helping magnify the strength of Yamaha’s engine package? Maybe not, but McElrath and Nichols sure seem dialed in on it heading into race three. -Brauer

Adam Cianciarulo pulled out of Wednesday night's race, citing weakness in his back after being ran over on Sunday. Now that he will have had another three days to rest, will it be enough to get back out there? Cianciarulo was consistently one of the fastest riders on track until he broke his collarbone at round eight earlier this year. Now he’s one of the first to attempt to rebound from injury while fighting the twice-a-week race schedule. If he can find that pace again by Sunday, he may even be a fantasy hero. -Brauer