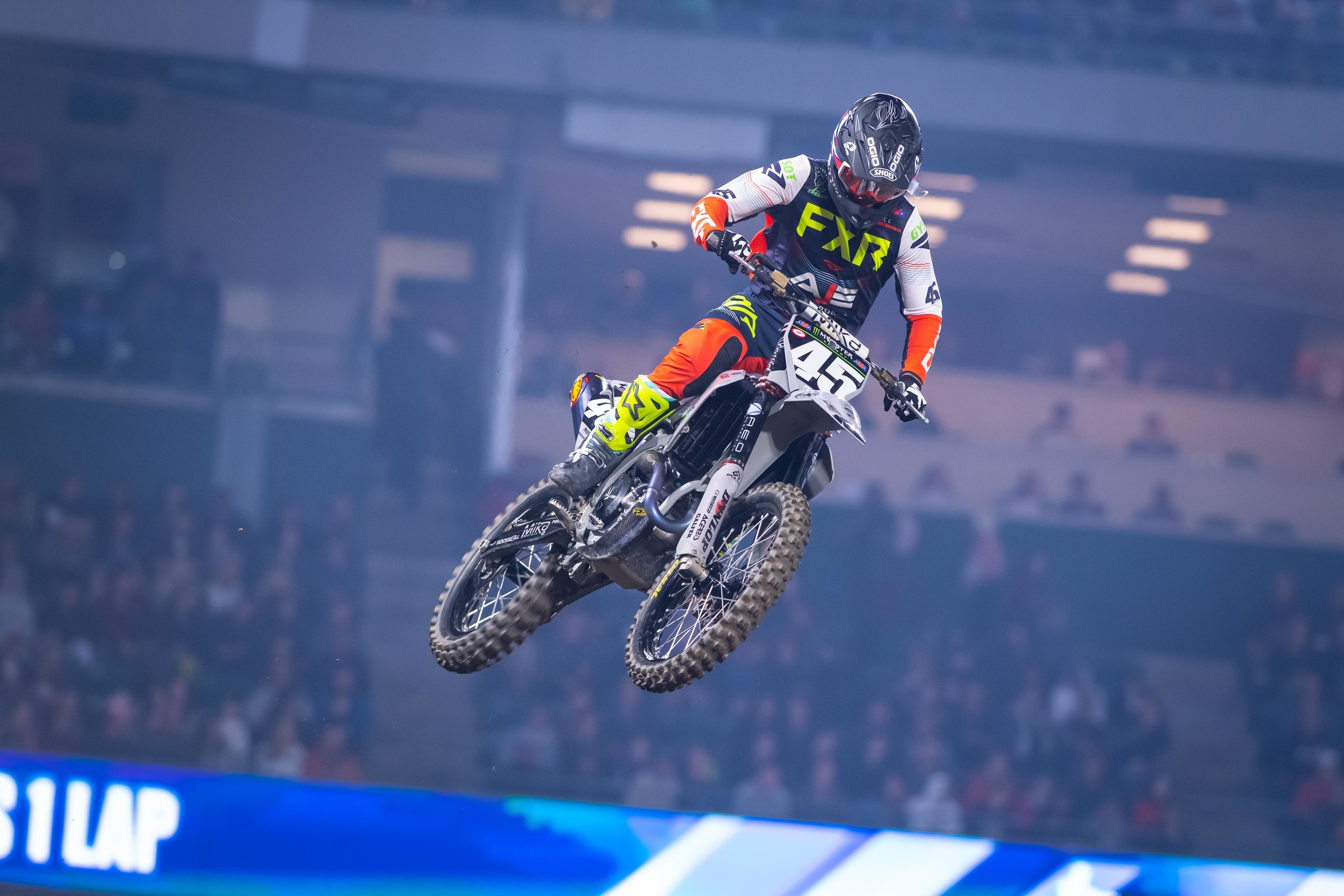 Jacob Hayes is hard to classify. In a world of haves and have nots, young and old, rich and poor, he straddles somewhere in between those worlds. He rides for the Gas Monkey Energy/AJE Motorsports Husqvarna team, a privateer effort, but one of the better privateer teams in the pits. He’s not on a factory bike, but he’s not working out of a pickup truck, either. At 26 years old, Hayes is somewhat of a veteran of the sport, but his supercross time is actually limited, because he spent several years in the Amsoil Arenacross ranks. Somehow, last year was his first supercross season! Arenacross makes him experienced, especially since he packs the 2018 AMA Arenacross Championship on his mantle, but he’s still new and unproven in supercross, by some standards.

Hayes’ history is unique, too. He’s not a privateer journeyman, because he had a good Kawasaki Team Green ride as an amateur and he rode for the Monster Energy/Babbitt’s Kawasaki squad in arenacross, which was the top team in that series. Yet he’s also raced on borrowed bikes, built his own stuff, and made it to races on zero dollars. It’s been a strange journey, but Hayes, now into year two post arenacross, is getting tired of it. He’s happy with the effort of his current team, and his current results are good. He sits sixth in 250SX West points with a season-best of fifth overall at the Glendale Supercross Triple Crown (finishing 6-5-5).

Still, he can only help but wonder if he could do more. Hayes hurt his shoulder badly racing the Australian Supercross Championship, so he had virtually no riding or training time before Anaheim 1 this year. He also rode a Yamaha all last year and had to transition to a Husqvarna for 2020. So now, he wonders, what if he could get a full off-season of training and riding on a factory bike.

Could he make the leap from top-five guy to podium guy and race winner? Will he ever get the chance?

I wonder if being caught in the middle, as he is, has become an obstacle. He’s not the sexy young hotshot pick that teams like to try.

“You definitely make a good point,” he says after I tell him this. “All I can say is, I know what I’m capable of. I’ve been up there and I’ve shown I have what it takes to be up front. I have the ability and I have the skill set, and I know with the right opportunity and the right program, the right amount of prep coming into the season, I can do it. I mean, I came into this season with no prep! On a brand-new motorcycle! I’m not trying to play the sympathy card but let’s be honest, some guys switched teams this year and said they were still working to get used to the bike. I had no prep and at round two I got sixth. At round four, I got fifth. So I’m just saying to these teams, what if I was given three or four months of prep? Where would I have been on a factory motorcycle? I know that I could be on the podium and winning races, because I do believe in myself that much.”

You can follow much of Hayes’ recent path by also looking at the progression of Brandon Hartranft. Last year, they were teammates on the Cycle Trader/Rock River Yamaha team, and became practically inseparable. You’d see them training together in North Carolina, then sharing every flight, every rental car, then space in the same truck on the weekend. This year, things have changed but actually stayed the same. Now they live in California, but they also live in the same house!

They’re no longer on the same team, though. Hartranft got the bump to full-factory status with Troy Lee Designs/Red Bull KTM, and, yup, immediately took that leap from 5-7 guy to podium guy.

“Yup. He did great. He put in two years with Cycle Trader, he paid his dues,” Hayes says of his roommate. “Like I said, I know what I’m capable of doing. I put in the work daily. I don’t train as hard as I do just to get fifth. I was stoked to get fifth at the beginning of the year, because of how little prep time I do have, but, at the same time, I know what I could do. This fire burns inside because of this what-if situation. I got fifth with the privateer motorcycle I was on. But what could I do on a factory bike?”

Hayes needs to be careful in saying this, because it’s easy for a non-factory rider to get labeled as a whiner. You get the sense that he’s waited too long for his factory supercross window to care much about that anymore. He could be quiet and patient, but he’s waited a long, long time already.

Eleven years ago, in 2009, Hayes was a top prospect after capturing the coveted Schoolboy 1 title at Loretta Lynn’s. As usual, there was solid talent in that class, including Justin Bogle, Kyle Peters, Joey Savatgy, and more (just don’t look at Schoolboy 2, which allows 250Fs. Eli Tomac was in that class and utterly dominated).

Hayes now points to a critical career misstep. He could have carefully picked his races to remain in the B class for 2010, and taken a big step toward more titles and confidence. Instead, he raced wherever he could and got booted into the A class. There’s a certain nobility and honor of just racing whenever you can, but that’s not the way the game is played by most top amateurs. Hayes now looks at his father’s strategy, of racing as much as possible to collect contingency money, as a mistake.

At Loretta’s in 2010, he ended up fourth in 250 A and fifth in 250 A/Pro Sport. Bogle and Peters remained in B that year, and went 1-2 in both of their classes. Then they all met up again as A riders in 2011, Bogle and Peters took titles. Hayes’ best was a second in 450 A to Bogle. Bogle and Peters left Loretta’s with factory rides with GEICO Honda and Star Racing Yamaha, respectively. They won titles, Hayes didn’t. They left with pro rides, he didn’t. That’s when the slog began.

Hayes points out some bumps in the road. He says he no longer has any sort of relationship with his father. At one point, he, his mom, and his sisters lived out of a motorhome at an RV park, because they didn’t have a house anymore. It’s a scratch and claw existence, and at one point it even showed on the track, as Hayes went straight to the heart of arenacross’ hard scrabble existence.

“I would think, coming out of arenacross, I was pretty much known as a dirty rider,” he says without hesitation.

One year, the arenacross finale moved to Las Vegas to run in conjunction with the supercross final weekend, on Friday night. The whole industry got to check out the action, and what they saw was Hayes, in a winner-take-all title fight with Kyle Regal, going for an ill-advised kill shot on the first lap of the race. It was takeout attempt, and the racing Gods punished him for it, as Hayes smashed his own bike in the process. Regal rode away. It sunk Hayes’ title hopes, and his reputation.

He’s been clean since coming to supercross. Some of those bumps are smoothed over now. He moved to California so he could get in front of more industry people. He’s still looking for his best chance, and he’s running out of time. Mostly, he just wonders: What could have been, and what might be?

Check out my full conversation with Hayes on an edition of the Racer X Exhaust Podcast below: