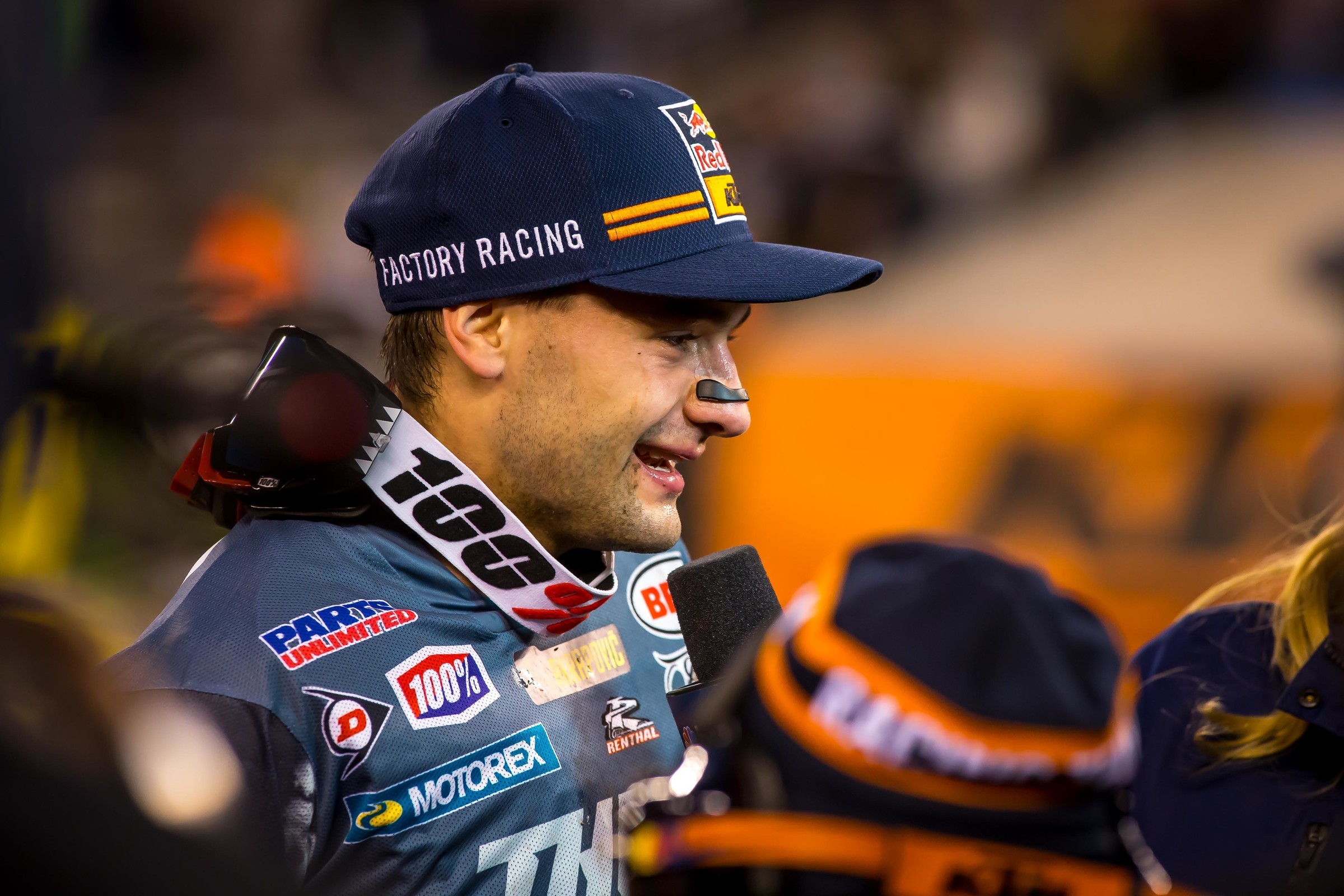 Red Bull KTM’s Cooper Webb wasn’t at the top of anyone’s title favorite list heading into Monster Energy AMA Supercross last year. Even Cooper, himself, had set more modest goals, hoping to win a race and rebuild a 450 career that had stalled. He ended up setting the fastest lap time at the opener, winning round three, taking the points lead, and ultimately winning the title.

But the 450 Class is always tough, and now Cooper has to try to back it up. The process starts now. We talked to Cooper at the KTM test track last week, as he was just getting back on his factory 450 SX-F.

Racer X: Do we want to mention Straight Rhythm or are we just going to move on? I didn’t know anybody cared, but maybe you actually care that you didn’t win. I don't know how you feel!
Cooper Webb: [Laughs] I’ve never done it, so it’s hard for me to say what normally goes into it. I feel like there was some serious stuff going on. It was stacked this year. I feel like normally you have your one or two heavy hitters, then it’s like Ronnie Mac makes the quarter final. This year it was like, you’ve got to be on it. I took six weeks off after Unadilla to get my knee right. It was one of those things where I could have probably prepped for it a bit more, but I rode the two-stroke the three days before it and kind of did the best I could. It was still good. It was fun to do and it was cool to do something new and ride a two-stroke and kind of learn something, a new challenge. The result wasn’t great, but it’s alright.

I think you treated it like most people are supposed to, just showing up and not stressing on it, but then these animals can’t help themselves. On Friday I’m watching people try to do this quad and Ryan Villopoto almost impaled himself. Did you even look at that quad? Did you even think about it?
I did it in my final run trying to beat Pierce [Brown]. We were all looking at it, and I think most of us were like, alright. No quads. And then Hanny [Josh Hansen] just got it. One guy, and then this guy. It was cool to do. It was cool to see it. For me, the funnest part was doing the replica stuff. I felt like THOR and KTM and everybody did a really good job on that. So I was pretty stoked with that. But definitely, I prefer the four-stroke!

What about your roommate, Brandon Hartranft? What got into him?
Yeah. I was able to ride and train with him a lot in 2017 and then off and on in 2018. I’ve seen his ability for a while now, so he didn’t really surprise me, I’ll be honest. He didn’t surprise me… especially when he fell to the pressure in the last round. [Editor’s note: Hartranft was sitting next to Webb during this interview.] He was good all day. The starlight came in, and he was like, “Damn, I’m racing Kenny,” and then he fell to the pressure! [Laughs] No, I’m kidding. He’s obviously got a lot of potential and I think he should be good this year.

That’s kind of weird. Are you guys living together? Is that what I heard?
Brandon is living in my California house. For me, I’m only here October and January. So it works out for the best.

So you’re almost like a roommate in your own house?
Exactly. Brandon’s full-time and then when I’m here and there I come in and out. So then we’re roommates.

Who’s in the main bedroom? Who’s in the master?
Cooper: Oh that’s me, man.
Brandon: He gives me this room with no dresser and no mirror. I had to start from scratch.
Cooper: You’re a factory rider now. You’ve got to spend some money.
Brandon: They didn’t even give me a bed.

So, does your bedroom just sit ten months a year not used?
Cooper: Pretty much!

So you had to take all this time off. How do you actually feel?
I actually feel really good. It was a good break for sure. Obviously it sucked the way it happened, but I was able to really just relax for a bit, let my knee get better and honestly kind of enjoy some time off. Took a few vacations, little trips, and relaxed. Just really unwound and that was nice mentally after a long year just to be able to wake up and not have anything to do every once in a while. It was really good timing. Even now I’m super excited and super motivated to get back riding. I’m excited to ride again. It was a good break. Much needed, especially I think after my first real full year, if you will. It was nice.

It’s a big load doing the Aldon Baker program, and you said you had never raced all 17 supercross rounds before. Was there almost a point where physically you felt you needed a break? Or would you have been okay to ride to the end?
Obviously there was only two more races. I would have been fine. But I was maxed there towards the end, to be honest. Like you said, I think the biggest adjustment was my first year with Aldon.

More than the 17 rounds?
I don't know. It was both maybe.

But you felt it either way?
Regardless, I even started with Aldon pretty much a month before everybody else just because I was so far behind when I got there. Like I said, who knows what it was, but it was definitely a lot different program than what I was used to and also, racing this much. Supercross wasn’t bad. I think it was more outdoors when it really started to hit. It’s tough outdoors. So when I was fighting for those fourths every weekend, it was getting hard to stay on it and stay committed and be out there in the Florida heat and just trying to achieve our goal. So I was glad that I was able to grind it out and get a win. Felt like I gained some momentum at the end of the series, unfortunately until I got hurt.

So you were in catch-up mode on the training and all that even by January, I would imagine. It’s not like you can just get that fitness in two months. So I would imagine by this January you should be way ahead of where you were last year. You’ve got a year doing all of this under your belt, even with that little break built in.
Yeah. Obviously I think even now, I feel ten times better. This is my second day back on supercross on the 450 and I actually already feel really, really good. I’ve said this a few times today, it’s nice to get on a bike that I raced last year. Last year the first four weeks were just setting everything up. So to be on a bike that’s comfortable right away and also the fitness is already elevated a bit, and then just the routine and knowing the people. I think it’s just a lot more comfortable.

I know your goal was to win just one race last year. You had said that was a realistic goal, but for sure you couldn’t have been expecting that round three was when it would happen. That’s pretty crazy.
It really is. I know I’ve talked about it all year, but last year really wasn’t supposed to happen, in a sense. I was talking with somebody else today about when I was here last year for the team intro. I don't think anybody knew what to expect. KTM had just signed me. I was coming off two not-so-great years. I was kind of in a weird point in my career and it was a big risk for them to kind of pick me. So I think they saw my potential maybe down the road, two years, year two or whatever, but I think last year was supposed to be more of a rebuilding year and it turned into the ultimate. Winning a race at round three, which was my first ever podium, winning back-to-back races, being on the podium as much as I was, winning the most races of anyone, and ultimately winning the championship… When you look back at it and I see the number one, now it’s like, how did that even happen?

Even Monster Cup. What’d you get? Ninth?
Yeah, Monster Cup I got sixth. Not bad. I might have got ninth overall. I had one bad main event, but I was sixth to eighth in the races.

But no one was looking at that being like, “Oh my God. Here he comes. He’s going to dominate.”
Exactly. We talked about it a lot but even in the off-season, like you said, I didn’t really click until… I remember coming out here after Christmas and [I] just was riding good. I was busting out 28s and wasn’t far off Marv. It was like, wow. Where did that come from? I think it was just that I did my boot camp, I did all the training and I kind of had a little bit to unwind during Christmas and regroup and recover and then it was like, man, I'm ready to go. Obviously the first couple races, Phoenix was bad, but Anaheim 1 was a very good race for me too. I think honestly that’s when it all kind of clicked.

The 450 class is gnarly. You’re the defending champ. Obviously, you’ve got a lot on your side, but it’s going to be hard to back it up, just because the class is gnarly. It’s tough. It’s going to be hard. How do you feel about that?
That’s what everybody keeps asking me, but that’s the challenge. That’s why you want to win, to prove to everybody. That’s part of being a champion, I feel, is to have to claim your spot every year. It’s a stacked class. Everybody is another year fitter, another year stronger, and another year more hungry to win. It’s going to be a tough year to try to back it up. For me, I honestly feel more confident and more almost relaxed because I know what to expect. I know what 17 rounds is like. I’ve won races now. I know how to win a race. I know how to battle these guys. I know really just what to expect. That knowledge and experience will maybe help me this year and try to go for that [title] number two.