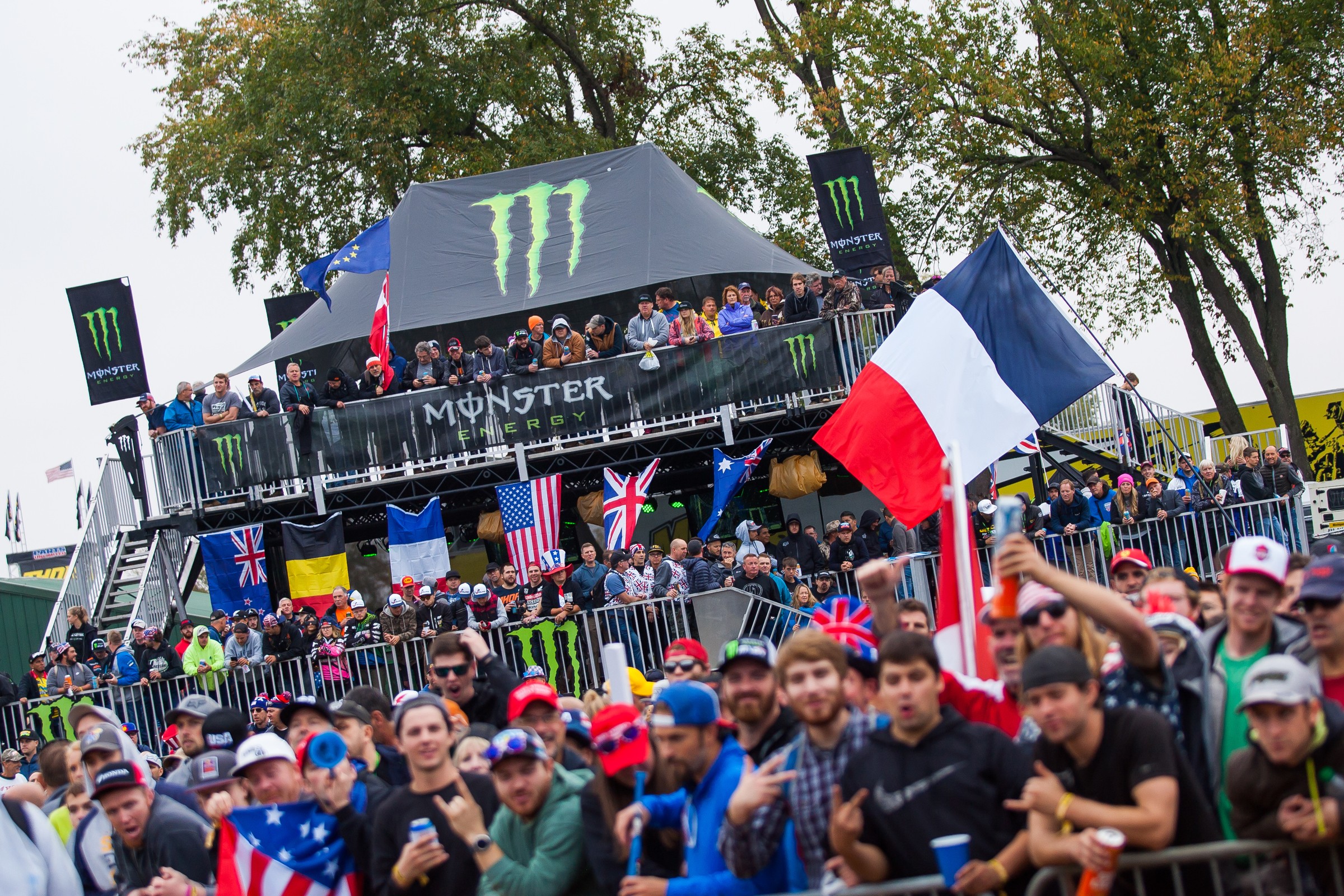 With the 2019 Monster Energy FIM Motocross of Nations at the end of the month, we run down who will ride for what team on September 28 and 29 in Assen, The Netherlands.

Make sure to follow along here on Racer X Online to keep up to date with the latest news on the 2019 MXoN.

A month away from the race and the defending champions have already been through a roller coaster ride. Romain Febvresuffered a broken femur at the MXGP of Sweden on August 16 and was replaced by Jordi Tixier to race the Open class. Then this Tuesday morning, news broke that Tom Vialle was removed from the team after a dispute over his Red Bull KTM team logo and the Team France gear, so the up-and-coming MX2 rookie will not make his Motocross of Nations debut in September. Vialle is now off the team, replaced by Renaux. Stalwart Gautier Paulin (MXGP) is still on board as Team France seeks a sixth straight Chamberlain Trophy this year.

While the 2019 FIM Motocross World Championship hasn’t gone Herlings way as he’s suffered two injuries to the same leg (both that required surgery) he is coming back to his typical form—which is bad for everyone that’s not Herlings and Team Netherlands. Glenn Coldenhoff is catching fire late in the championship, as he’s won the last two rounds (1-1 at the MXGP of Italy and 1-2 at the MXGP of Sweden). The team was announced with Herlings and Coldenhoff as the 450 riders, but with both Calvin Vlaanderen and Roan Van De Moosdijk named as MX2 riders. MX Vice reported that, "A handful of training days in deep sand will be run to determine whether Vlaanderen or Van De Moosdijk should fill the MX2 berth." While nothing has been made official yet, Vlaanderen was listed on the team's entry list.

Max Anstie was to lead the team in the MXGP class but after an injury at the MXGP of Italy, he will not be able to participate.

“I have been having scans over the last 2 weeks - the doctors have said it will be too risky and that my lung could collapse if i push my body/lung to its limits too early,” Anstie said in an Instagram post, which you can see below. “So I’m out of the Nations for this year. it’s really disappointing because I have been looking forward to this race for a long time now!”

Ben Watson was also named to the team but suffered an injury (to his wrist) at the MXGP of Italy, ending his season as well. All three riders are experienced in the sand but with the injuries to Anstie and Watson, it’s unknown who will join Simpson—although it will not be Dean Wilson. Wilson said he still hasn’t recovered fully from his shoulder injury suffered at the end of the Monster Energy AMA Supercross Championship (which knocked him out of the last two rounds of supercross and kept him out for the first six rounds of the Lucas Oil AMA Pro Motocross Championship) and would not be participating this year.

MX Vice reported this week that Adam Sterry will join the team as a replacement, but he doesn’t yet know if it will be on a 250 (replacing Watson) or a 450 (replacing Anstie).

I’m out of the MXON this year ? I have been having scans over the last 2 weeks - the doctors have said it will be too risky and that my lung could collapse if i push my body/lung to its limits too early. So I’m out of the Nations for this year. it’s really disappointing because I have been looking forward to this race for a long time now! Good luck to Mark and all the boys on the GB squad for Assen! ?? The docs say I’ll be good to start pushing again by early October just a shame all the races are over by then ? @markchamberlain211 @teamgbmxon ?@shotbybavo

Three-time Australian Motocross Champion Dean Ferris will lead the team in the MXGP class. Ferris, who began the 2019 season with Monster Energy Yamaha in Lucas Oil AMA Pro Motocross before returning to Australia, has represented Australia on numerous occasions and has prior experience racing the FIM Motocross World Championship. Evans, currently 11th in MX2 points, will make the jump to a 450 and compete in the open class. Webster, the 2019 Australian Motocross MX2 runner-up, will represent the team in MX2. The team is obviously devastated by the loss of Hunter Lawrence who sustained a knee injury prior to the final round of Lucas Oil AMA Pro Motocross at Ironman. Lawrence won the MX2 Class at the 2017 Motocross of Nations and finished runner-up in the category to Jorge Prado at RedBud last year.

The 2019 USA Team was announced at the Unadilla National: Rockstar Energy Husqvarna teammates Zach Osborne and Jason Anderson will make their second appearances for the team and Monster Energy/Star Racing Yamaha's Justin Cooper will make his MXoN debut. Anderson raced the 2016 event and famously won the second moto, only to get landed on by a rider while rolling the finish line jump and was unable to race the final moto. Osborne raced the event in England in 2017, where he finished second overall in the MX2 class. Cooper, who finished his third year of racing as a pro, will race in the MX2 class. You can hear what Anderson, Osborne, and Cooper had to say about the upcoming event during the MXoN press conference from Ironman, which you can watch below.

At the MXGP of Belgium, the MXoN team was announced with Jeremy Van Horebeek in the MXGP class, Jago Geerts in the MX2 class and veteran Kevin Strijbos in the Open class. Veteran Belgian star Clement Desalle, who first competed in the event in 2009, is out after breaking his leg earlier this year at the MXGP of Russia in June. Van Horebeek and Strijbos are veterans of the event (Van Horebeek to make his 11th appearance and Strijbos made his MXoN debut in 2004) while Geerts will make his second appearance. Van Horebeek is currently ninth in the MXGP standings, Strijbos is 21st and Geerts is currently third in the MX2 standings in what has been his best season in the class so far in his young career.

Red Bull KTM's Jorge Prado just wrapped up his second consecutive MX2 FIM Motocross World Championship, and will move to the MXGP class of the FIM Motocross World Championship in 2020 where he will join Herlings and Antonio Cairoli (yes, that’s a scary lineup, we know!). He will make his 450 debut at the Motocross of Nations at Assen for Team Spain. Prado will compete in the MXGP class with Iker Larranaga (MX2) and Carlos Campano (Open) also named to the team. He confirmed to MX Vice at the end of August that he’s never ridden a 450, so it will be interesting to see how he performs in Assen.

"I still need to test," he said, prior to claiming the 2019 MX2 title. "I never rode a 450. First I need to get this title done, then I am looking forward for the next chapter."

Leok, arguably one of the most experienced current riders in the history of the event, will lead the team in the MXGP class. He currently sits 16th in MXGP points standings.

He competed for Team Germany last year at RedBud, but Honda HRC’s Ken Roczen will not participate in this year’s event, as the Mattstedt, Germany, native competed in all 29 AMA races this year for the first time since 2016. He raced through an undisclosed illness through much of the year.

“Overall I’m just stoked I finished in second,” Roczen said following the Ironman National finale. “[Our] Goal was always the championship. The biggest goal I think was racing 29 rounds. We achieved that this year. That’s huge. That’s going to be a huge setup for the next season already.”

With Roczen not on the team, Koch will lead the charge in the MXGP class. Germany was building a MX2 star in Henry Jacobi, but a torn ACL and meniscus will keep him out of the event.

Each year the Swiss team seems set with the talent to make a podium run, but it usually never works out that all the riders are healthy, ready, and lucky at the same time. They’ll take another swing this year with Jeremy Seewer (MXGP) and Arnaud Tonus (Open), who are both enjoying strong seasons. Seewer is second in MXGP points, and Tonus, revitalized this year, is fifth. They will be joined by veteran Valentin Guillod, who went 25-27 in his motos at RedBud last year. They will need a little magic, but could this finally be their year?

Italy finished second at the event last year but was disqualified after the fuel in Michele Cervellin’s bike did not pass the testing following the event. The team finished only two points behind the victorious French team but was listed in 30th (last) at the end of January when the disqualification was announced.

"On this basis, the FIM Race Direction of the above-mentioned 2018 Monster Energy FIM Motocross of Nations has decided to impose upon Mr CERVELLIN's team (team Italy) a disqualification from the entire event, in accordance with Art. 63.05.13 of the 2018-1 Technical Rules Motocross," read the MXGP press release.

The team will be without nine-time world champion Antonio Cairoli, who suffered a dislocated shoulder at the MXGP of Latvia on June 16. Cairoli’s injury eventually required surgery and ruled him out for the remainder of the season, and the team went with Ivo Monticelli (MXGP), Alberto Forato (MX2), and Alessandro Lupino (Open). Lupino is a veteran of the event, having previously competed six times for Team Italy. This will be Monticelli's second appearance, and first since 2015, and Forato will make his MXoN debut at Assen. With two rounds remaining in the 2019 championship, Monticelli and Lupino are 12th and 20th, respectively, in the MXGP standings and Alberto Forato is currently third in the EMX250 class standings.

2018 Finish: Did not participate

The 2019 MXGP FIM World Champion will lead the team after coming off of third world title. Slovenia did not send a team to RedBud last year. Gajser was able to clinch the title following the first moto at the MXGP of Italy, round 15 (of 18) of the championship. Gajser will make his seventh appearance in the MXoN while Pancar will make his third appearance and Irt will make his fourth appearance for the team.

2018 Finish: Did not participate

Way back we used to make jokes about Stefan Kjer Olsen/Thomas Kjer Olsen being the Olsen Twins of motocross, but the real Olsen Twins aren’t really a thing anymore. (They couldn’t even participate in the Netflix Full House reboot Fuller House? Come on!). No reason to make jokes anymore, anyway, because Thomas Kjer Olsen has rounded into a genuine contender in the MX2 class, and even led the standings when Prado took on an injury early in the season. The Danes might not be contenders for the team overall win, but TKO will be a contender in the MX2 class.