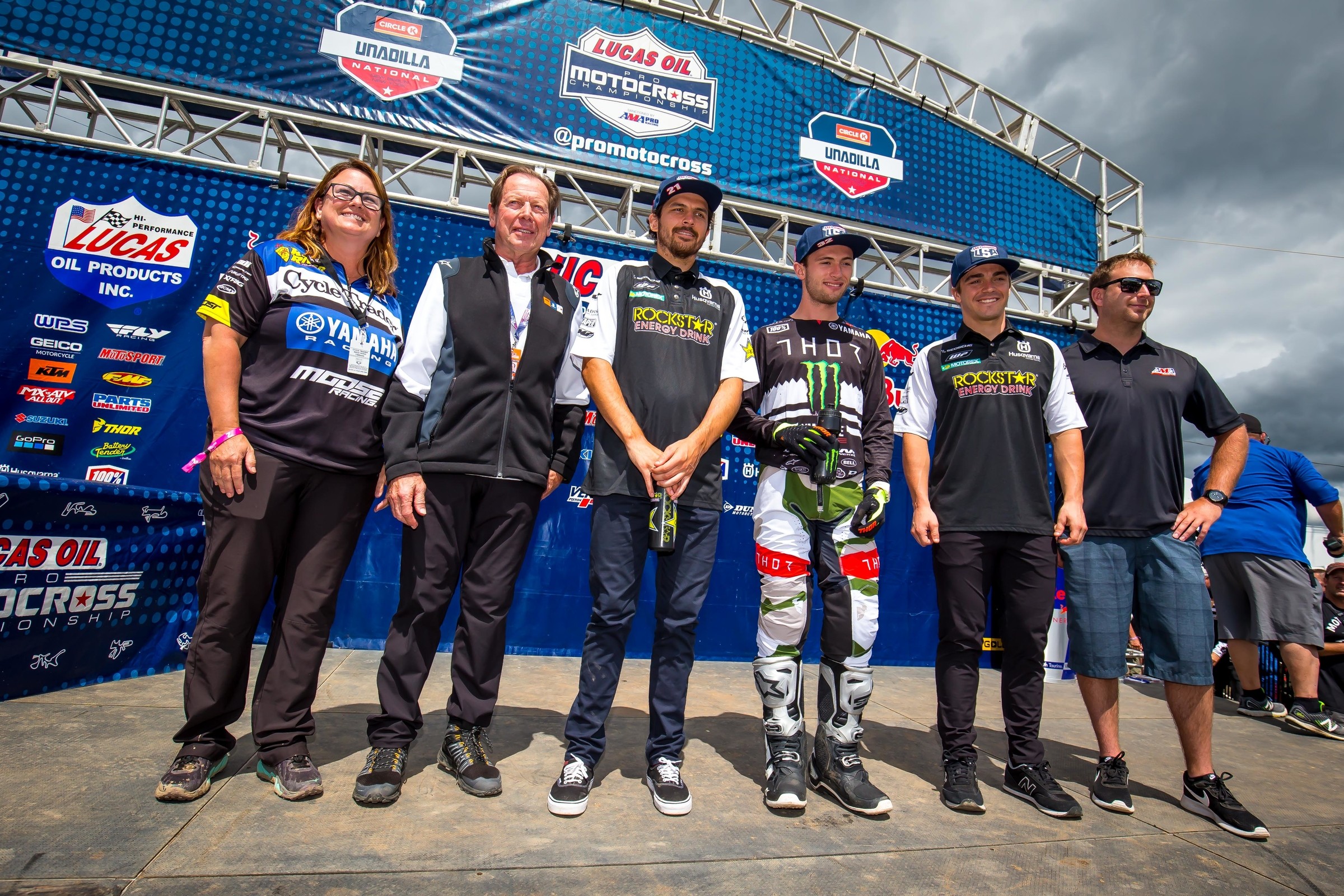 Team USA has been assembled for the 2019 Monster Energy FIM Motocross of Nations, scheduled for September 28th and 29th in Assen, Holland. As has become tradition, the team was announced at Unadilla MX, which hosted the event back in 1987.

But that was then and this is now. In the 1980s, Team USA seemed unbeatable no matter what happened (that Unadilla race was an all-time mudder but Californians Ricky Johnson, Jeff Ward, and Bob Hannah came through), and the team had plenty of success at non-U.S. events, regardless of the race format, or the track surface. Sandy races pushed Team USA to the brink a few times (including the very first triumph at Lommel in 1981, as well as races in Sweden and Holland in 1990 and 1991) but the American squad still came out on top.

That all changed in 2012, when sandy Lommel resembled quick sand to the American squad. The team struggled mightily and saw a seven-year win streak snapped. Team USA has not won since, and even a home race last year at RedBud couldn't get the team back on track (or even on the podium).

Assen works, though, because of the sand. They bring in enough of the stuff to provide a bottomless, ultra-rough feel. It may or may not be as tough as the famous motocross sand tracks in Holland and Belgium, but it's certainly not easy.

"The track is actually built on a road race course, they bring in tons of sand, put it on top of the asphalt and then they make a track," explained Roger De Coster, once again team manager for the squad. "It's really soft and it's going to be really tough, but our guys are going to go over early. We have a lot of plans for the testing and stuff."

Jason Anderson, Zach Osborne, and Justin Cooper will comprise the U.S. effort in 2019. Rockstar Energy Racing Husqvarna's Anderson and Osborne will race on 450s, with Anderson in the MXGP class and Osborne classified in Open. Cooper will race his Monster Energy/Star Racing Yamaha YZ250F in MX2. Osborne has told us that he and Anderson will fly to Europe three weeks before the event to test and train in the sand, and Cooper will come over two weeks before the event. This is much more prep time than Team USA normally gets in Europe, which shows a true dedication to the event. For these riders and their teams, this is not an afterthought.

"I think we have three guys who really want to be there and are enthusiastic about the event, and that’s half the battle," says Osborne. "We’re going to go over and try to dial in our bikes and try to get used to that European sand."

Osborne has been named team captain. While that particular title doesn't really carry any specific duties, and Osborne joked that maybe he was named to the spot only "because he's old," he's actually quite fitting. There might not be another rider in the world who likes this type of challenge more than Zach, who has lived and raced in Europe, will ride any bike in any type of race anywhere, and has competed for Team USA before not only in the MXoN, but also in the International Six-Days Enduro. Heck, if Zach's salaried job wasn't to race Monster Energy AMA Supercross and the Lucas Oil AMA Pro Motocross Championship full time, he'd probably be on his own version of the Ryan Sipes' do-it-all program. Going to Europe to prep in sand for three weeks? Bring it on.

No doubt, Zach's enthusiasm for such a tall task has been infectious, and he's got training partner and teammate Anderson on board. Anderson has raced MXoN once, and it was both the best and worst day of his racing career. Despite riding with a broken foot suffered in qualifying the day before the race, he held off Jeffrey Herlings for the lead in his first-ever 'Nations moto, and then Herlings crashed. Anderson cruised to the win, only to be landed on by a lapped rider while rolling the finish line jump. He was thus unable to race the third moto, and Cooper Webb had to take all the team pressure on his shoulders solo. Webb nearly pulled it off, but crashed, and a win slipped through Team USA's fingers. Much has been made about the American motocross scene falling so far from grace, but had Anderson not been landed on, a Team USA win at the 2016 'Nations would have paired right  up with Eli Tomac sweeping four-straight USGP motos in the MXGP class, and Webb edging Herlings for a USGP MX2 overall win in Charlotte that year. The Americans are just three years removed from great performances on the world stage. Surely, Anderson remembers how close he came to glory, and wants another shot.

As for Cooper, he's maintained all season that he'd be in if selected. He also says he loves riding sand. Back in 2012, though, the Americans learned that the sand they grew up on and the sand in Europe is much different. This year's task is still quite significant.

This team will give it all they have, but it might be the other teams that tell the story. It's difficult to imagine Team USA straight-up outpacing the European teams on a foreign surface. However, recent MXoN victories have rarely gone to the fastest team. Consistency and luck play a much larger role in a one-day event, and perhaps no one can talk of the "making your own luck" cliche better than Team France, which handles any adversity heaped on it without much trouble. Even when top riders are injured, the French just plugs in another and goes and wins anyway. Other teams are faster at times, but France finds a way—kind of like Team USA did for so many years.

Think of it this way: The Dutch team was no doubt the fastest team last year at RedBud, with Jeffrey Herlings and Glenn Coldenhoff sweeping the moto wins. They merely needed MX2 rider Calvin Vlaanderen to get decent results on his 250, which he would have done, until he was struck in the eye with a rock. That ruined the team's chances, just like Team USA was sunk three years ago when Anderson got landed on. It's stuff like that that makes the ultimate difference.

You have to be in it to win it, and Team USA's three riders are definitely all in. Will that be enough? Crazy things tend to happen in this race, and that could be what Team USA is banking on this year.