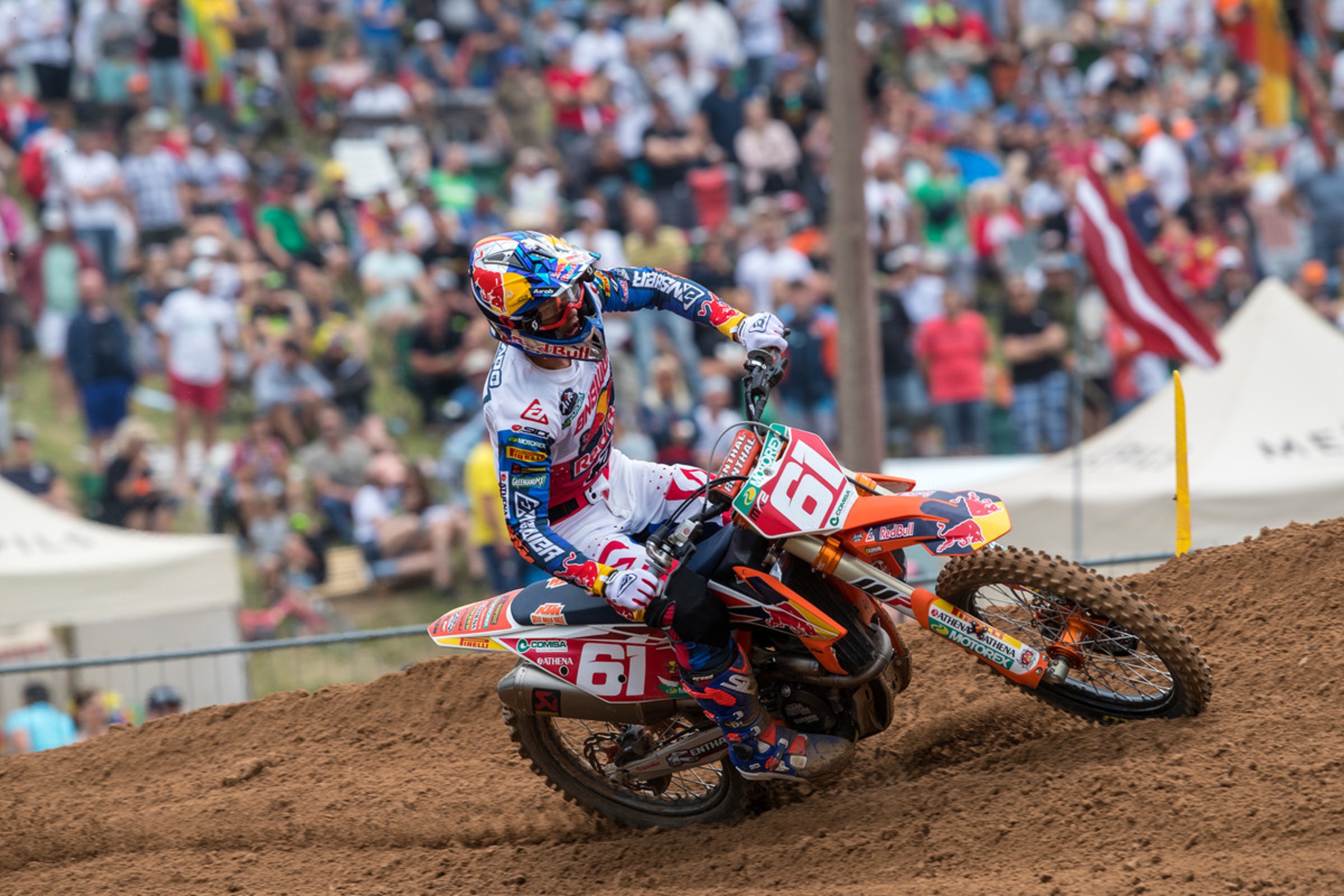 Right around halfway through the 2019 FIM World Motocross Championship, chaos has reigned, with Honda HRC’s Tim Gajser completing a career (and season) comeback to take the points lead from Red Bull KTM’s Tony Cairoli, and Jeffrey Herlings returning from injury—only to go out with injury again!

We sent some questions to Lewis Phillips of MXVice.com to get some trackside opinions on the latest action.

Racer X: Dude. Tim Gajser. Is he made of rubber? After surviving so many hard early crashes, he’s charged all the way back up to the points lead. What so you think has changed with this guy over the last month or so?
Lewis Phillips: It is insane that we are now in this situation where Tim Gajser is this powerful. He had drifted so far from that since his last major title in 2016. The number of times that he has been injured, or at least beaten up, has actually been downplayed a bit. I believe that he is still having work done on his jaw, after breaking it 16 months ago! Anyway, I think we are now seeing just how much confidence plays a role in this sport. I think that card is pulled out way too often, to be completely honest, but the fact is that it had been quite some time since he last put a couple of dominant weekends together.

Heck, that win at the Grand Prix of Trentino in April was his first since August 2017! I do think that the way he rebounded in Portugal, after a dismal showing seven days prior in Italy, did a lot for him. That mudder at Mantova was simply disastrous and he then started questioning himself, which really gave a sense that it was make-or-break time. I don't think he would be this strong had he struggled again in the rounds that followed Mantova. I think that even he would admit to that too.

Wait, did Herlings really win a moto on a broken ankle!? Did anyone realize this as that first moto was happening? What was the story at the track when he left before second moto?
It is unbelievable. Even now, reading that, it seems ludicrous to think that whole scenario played out at the Latvian fixture. It is fair to say that no one actually knew the extent of the injury whilst moto one was taking place, but I believe he knew. In talking to the Red Bull KTM outfit, the second that he returned to the truck he told everyone that he was in an immense amount of pain and would not be able to walk. A quick trip to the medical centre revealed that the ankle was very swollen and then that was that!

The only positive that came from those discussions between the races is that it was undetermined whether surgery was needed. It sounds like he could be back around the beginning of August, but it all depends on what Dr. Claes has to say. The atmosphere in Latvia was insane. The first race was so good and had everyone talking, then in the blink of an eye everything changed. It is worth noting that Jeffrey Herlings set his fastest lap on lap 14 of 17 in the first race, which was later than anyone else. With a broken ankle! The mind boggles.

There is always some negativity whenever Jeffrey Herlings gets injured, as some believe it is inevitable that will happen at some point. Herlings does not have massive crashes though! It just does not happen. I cannot even recall the last time that he had a crash as big as the one that Tim Gajser had in the qualifying race on Saturday, which goes back to that last point about the current series leader being made of rubber. Gajser has big ones but somehow escapes. Jeffrey has had minor mishaps turn into big injuries. Is it just bad luck? Perhaps. The foot injury that he sustained in the off-season was not the result of a massive crash either. The idea that Herlings often crashes big is a common misconception.

Is Cairoli in serious trouble now or are we just seeing an exchange of mistakes and wild point swings between he and Gajser?
I would lean towards the latter here, simply because Tim Gajser trailed Antonio Cairoli by 40 points less than two months ago and look how that turned out! There is reason to be concerned about Cairoli now though, as a dislocated shoulder can be troublesome. The good news is that it was not complicated at all and he did not sustain any further damage, despite the fact that it took a while for it to be put back in, so I think he will be back at the Grand Prix of Germany this weekend and in a position to salvage solid points. It is worth noting that, as well as the dislocated shoulder, he also has some issues with his triceps after the crash in Russia two weeks ago.

Although the focus is undoubtedly going to be on Cairoli and whether he can rebound, maybe the spotlight should be on those mistakes that Tim Gajser continues to make? A huge crash has to catch him out at some point, one would think anyway. Perhaps he can just harness that speed and relax now, knowing that he is in a pretty good position, therefore minimizing the number of the mistakes? History states that will not happen, but time will tell.

Another reason for Cairoli to be concerned is that the list of upcoming rounds plays into the hands of Gajser. There is an abundance of hard-pack events, more than in recent years, which is where Gajser really shines. Lommel is the only sand race that remains and that will not have enough of an impact. In the past there would have been an event at Assen in the second half as well, but that venue is obviously being prepared for the upcoming Motocross of Nations.

I’m hearing a lot of “he’s every bit as good as young Roczen and Herlings” buzz on Jorge Prado. He’s been amazing but that’s an extremely high level. How good has he been?
Well, he has been perfect! Jorge Prado has won every round that he has contested, despite the fact that a shoulder injury forced him to sit on the sidelines for a couple of weeks in March. Thirty points is his current advantage. The amazing starts that he gets every single week can make him tough to judge, as there is not a highlight reel of incredible passes nor is there a story about him charging up through the field to take an unbelievable win. If you watch him ride, then he simply does not put a foot wrong and is technically brilliant on all surfaces. Is he going to be one of the greats? Of course.

It is worth noting that he did get chased down in a race at the Grand Prix of France in May, as he was beaten by Jago Geerts in a straight-up duel. Geerts actually came from quite a way back to take the first moto win of his career. Prado had no issues in that race, but he stated that his downfall was that he relaxed too much and thought he was safe at the front. The point is that he can be beaten, even though it is rare. That is the only points-paying race that he has lost this term. Are those impressive statistics influenced by his faultless starts? Yeah, sure, but they are still valid.

I actually think that the way to beat Jorge Prado is to rattle him in the first couple of laps. I think that if one of his rivals can slot in right behind him off of the start, then pounce immediately, it would push him outside of his comfort zone. It would be interesting to see how he would react in that situation. No one in the MX2 class has managed to do that though, as his sprint speed on those first couple of laps is unmatched. See, he really is faultless!