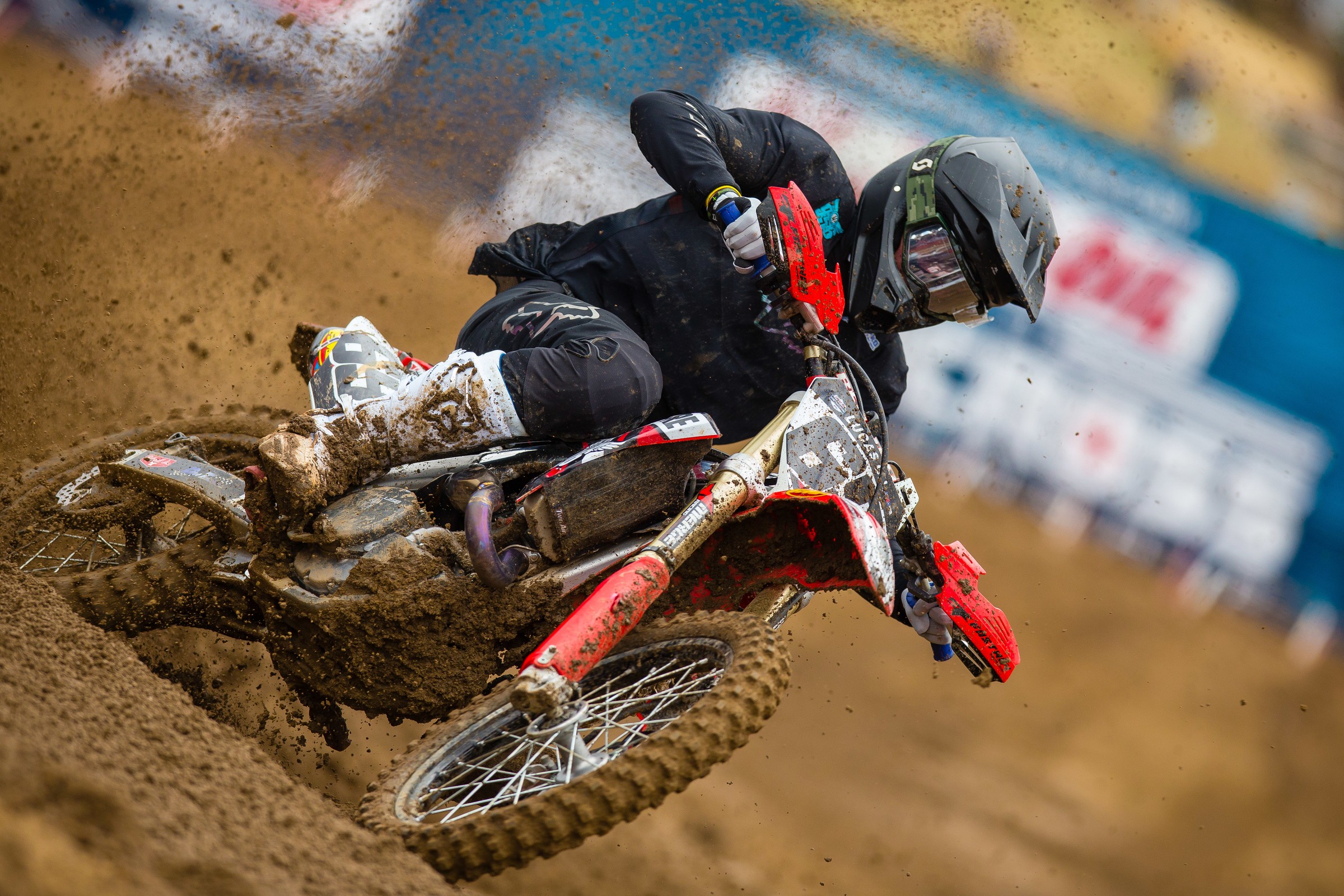 For a majority of his amateur career, Jake Masterpool was dubbed “the mayor,” due to his likeable nature, and basically being friendly to everyone he came in contact with. Masterpool is now in the second year of his Lucas Oil AMA Pro Motocross Championship campaign. We have no reason to doubt that he has figured out a way to befriend the other members living on privateer island—which he has probably taken office as mayor of as well.

Once the gates drop, Jake has managed some solid results to start the season and he sits 15th in the 450 Class points through three rounds. He admits that he’s dealing with some struggles, but that he plans to focus on the positives and keep looking forward.

We caught up with the Texas native earlier this week to chat about the first quarter of racing, the weekend off, practice-track battles with his younger brother, and more.

Racer X: It’s Tuesday before High Point. What are you doing right now?
Jake Masterpool: Getting the bikes and everything ready for High Point because the RV leaves tomorrow! And Just got a new little stationary bicycle for warming up so I’m getting that ready as well!

Three rounds of racing are in the books, you’re top 15 in points. Are you happy with that so far, or definitely more in the tank?
Yeah, I am content considering all the stuff I’m dealing with. Definitely a lot more in the tank and looking forward to the rounds to come.

What kind of stuff are you dealing with? Just standard privateer issues?
Yes and no. Just some stuff physically. And I came into the year kind of unprepared—I rode my race bike once before Hangtown. So just kind of playing catch up.

That said, this is your second year now competing in Pro Motocross, how would you compare the way this year has gone versus last year after the first three rounds?
It’s definitely been a roller coaster so far. But just happy with my progress and just looking forward to continuously getting better. It feels good because I feel like I belong with those guys. And the biggest thing I learned from last year is how important the first practices are, and just little things like that.

Did you work on anything specific during the off-week? Or were you able to actually take some time off?
I had to take some time off. But mostly just did some testing with Merge Racing and a lot of technique work when I was riding!

Switching gears a little. Your younger brother, Ty, he’s pretty quick. You have him covered on the track or is it a battle?
[Laughs] Yeah he is! He definitely keeps me honest and we have some good battles!

Most people know the Masterpools are a tight family. How’s that dynamic been at the races with you doing your thing, while he’s over at the Monster Energy/Yamalube/Star Racing Yamaha truck? Challenging for the parents or still business as usual?
It definitely makes it a lot busier! Parents are always running around trying to take care of us! But I love it because I get to watch him and cheer him on while I’m getting ready. And I don’t have to race that little turd yet.

But when the time comes, will you put him on the ground in a corner if you have to?
[Laughs] He knows what happens when he tries rubbing bars with big bro. No, I enjoy it when we battle because we don’t have to worry about each other taking cheap shots and we can ride close and fast. It’s more fun battling with someone when you know they’re not going to take a cheap shot on you.

That reminds me, you had a little run in with the bear—Tyler Bowers. What happened there? Neither of you seemed exactly pumped on the situation!
Yeah, everyone was saying it was the Clash of the Titans. [Laughs] No, it was just kind of a tough-luck situation; his line hooked into mine, and then it all went downhill from there. I finally got a good start too. But it happens and we were able to joke about it after. I felt really good with my riding, I was able to come from 40 seconds behind last to I believe 24th, so just have to take the positives and move forward.

Moving, looking forward; 15th in points now, where do you hope to be or how do you hope/look for these next few races to go before the second break of the season?
I just have to get some good starts and ride like me and I think I’ll be up there, so I’ll just have to focus on that!

Sounds like a stellar plan. Anyone you want to thank before we let you get back to being the mayor of Privateer Island?
[Laughs] I have a lot of people in my corner that I would like to thank. But this new sponsor I just got—New Existence—and a great guy, I would really like to thank him for coming on board and helping me a lot! And thank you and Racer X for all you do!